The title is a bit misleading, as we've been in the Bay of Naples for over two weeks. At some point I hope to get around to writing about the many things we've seen and done here. We've had a visit from Rick's sister Lyn and her husband Kevin, spent hours walking through the streets of Pompeii, visited the Amalfi coast and spent a night in Procida. We visited Herculaneum (the ruins of another town that was destroyed in the same eruption that wiped out Pompeii) took a day trip to Capri and made several forays into the heart of downtown Naples. Visiting the Archeological Museum, seeing the Veiled Christ in the Capella di San Savero and standing in front of Caravaggio's "Seven Works of Mercy" in the Pio Monte della Misericordia were unforgettable experiences. But this posting will talk about Camerota and Agripoli, the two places we stopped before arriving in the Bay of Naples. We didn't spend much time in either place, but we're posting a few photos with cruising notes for the benefit of those who might be wondering if these ports are worth a visit.

Camerota was a convenient landing place after crossing from the Aeolian Islands. The setting of the marina is lovely, and the beach has a "Blue Flag" award for its clear water. Entering the harbor, you may notice two picturesque towers on the hillside. Many such towers can be found at strategic locations along Italy's coasts. In times of old, they were used as lookouts and signal points to defend against Saracens and pirates like Barbarossa who terrorized this coast in the 16th century. On the other hand, you may not notice these towers at all if, like us, you are busy trying to figure out the confusing Italian directions on how to avoid going aground at the entrance to the port. See Rick's cruising notes at the end of this post for more information.

Camerota is an attractive town, with a pretty church in a piazza that sits on the hill above the harbor. Unfortunately, I can't tell you much else about the town, because I spent almost my entire time there doing laundry. This was a tedious job that began with piling the first load into the marina's washing machine, and returning to find everything covered in some type of mysterious white grit. By then I had discovered the self-service lavanderia on a street above the piazza, but the multiple trips up and down the steep hill meant that the job wasn't finished until late afternoon. Grazie mille to the bartender who changed my 20 euro note into enough coins to wash and dry three loads, even though I only bought a single Coke Zero from him. It's days like these that inspired me to write an ode to my washing machine at home. Oh well, at least I didn't have to resort to washing everything by hand, and I'm sure Rick spent the day doing something that was even less fun. The best part of my time in Camerota was the pizza Romana that I had at La Locanda di Romeo on the night we arrived. It cost only 3.50 euros, and the glass of red wine that I ordered with it (3 euros) was so large that, possibly for the first time in my life, I could not manage to finish it. 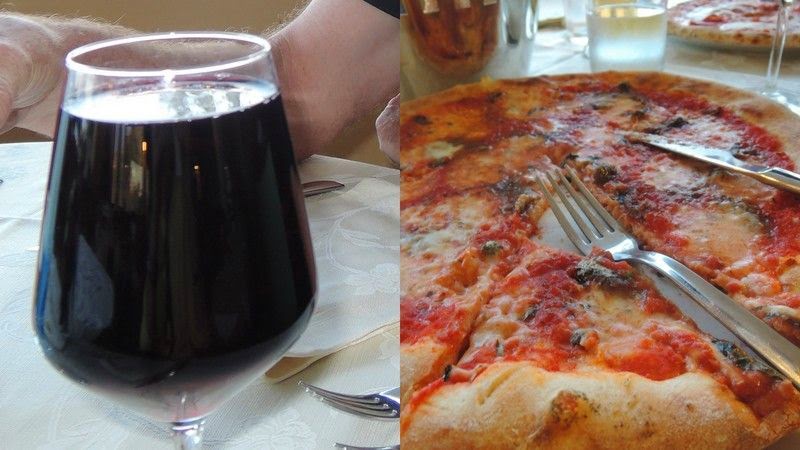 We stayed only two nights in Camerota, because the marina price of 50 euros a night seemed rather steep to us. Little did we know that as we continued up the coast, this price would begin to seem like a real bargain. With naïve optimism, we pressed onward to Agripoli, where we discovered that the price was 60 euros a night. Still, I'm glad we went. Agripoli is a lovely holiday spot with an old medieval town at the top of a cliff and an attractive waterfront and beach. We arrived there on Mother's Day afternoon and had a nice time wandering through the town, climbing the hill to the old town and admiring the beautiful flowers.

A small market was set up outside the church, and one vendor was selling an antique German blood pressure machine for 80 euros. It was quite unusual, as the cuff went round the thigh rather than the arm. Later, I wished I had bought it, although, as Rick pointed out, what would I have done with it? We sat down for a drink at a restaurant above the port and called our mothers to wish them Happy Mothers' Day. It was also Mothers' Day in in Italy, and a large group was having a celebration on the terrace. The two boys in the picture below, all dressed up for the occasion, were having a great time performing for us, showing off their English by wishing us "Goood morrneeg" (at 6 in the evening) and calling each other "stupido". Yes, that really is the Italian word for stupid.

And that was about it. The next morning we set sail for Pozzuoli, 9 hours away in the Bay of Naples, where we hoped to get our plumbing issues resolved at Marina Cantiere Sud. A VHF call revealed that the price per night was (gulp) 80 euros. So we decided to anchor off the old fort at Baia for the night and at least save the price of one night. At the time, we didn't realize that just a short distance away, underneath the water in a buoyed restricted zone, were the sunken ruins of an old Roman bathing resort that was infamous for debauchery. We never know what is under our feet here!

Rick's Cruising Notes Camerota: Subject to silting at the entrance. The channel is not marked but carries 11' clearance on the way in. If you divide the harbour entrance between the outer mole and the inner mole into 3 sections, the channel lies roughly on the line between the most landward section and the center section. This had at least 11 feet. When we entered the harbour we did not know where the channel was and went down the middle and it was 7 feet deep. We draw 6' 7". "Phew for that", as my son used to say. The bottom is sand in the channel. There looks to be a nice anchorage in sand, albeit open to the south and east.Cost was 50 euros per night in May, water (potable) and electric included. Camping gas in the store above the IP Fuel station. Travel lift and diesel and gasoline available. Difficult to find a chandlery or hardware store. Showers clean toilets and washing machine available. Self-serve lavanderia with washers and dryers above the piazza (near the grocery store). Restaurants etc nearby. The marina is pleasantly situated and the town is attractive. Tel 0974 939813 email info@portodicamerota.it; www.portodicamerota.it

Rick's Cruising Notes Agripoli: Their web site is http://www.portodiagropoli.com/. We called John Ruocco Cell 349 0926609 to arrange a berth. His daughter(?) Antonia speaks pretty good English. The rate was 60 euros which includes water and electric. I believe you can tie up , maybe for free, at the end of the outside mole, according to Heikell and it looked like there was swing room between the inside mole and the cliff, off the beach. I saw 2 chandlers by the marina and in town (a short walk up the lower hill) is a Super Mercado.There are toilets though we didn't see them.
More
Comments
Newer Older
Contents