Let's face it, we'll never catch up. Who on earth ever does, really? But I'm not talking about catching up on the many things we should be doing, and aren't. I'm referring to catching up on this blog, where for 8 years we've tried to maintain a reasonably faithful journal of our travels. Somehow, we got knocked off the rails with our writing. The long, tough and busy winter was partly to blame, as was the sadness caused by too many things happening that we wished hadn't. I've just recently realized that I need to be in a reasonably positive frame of mind in order to write anything. And of course, we have to carve out the time to sit down and do it. This is the first day in months that both of those things have happened simultaneously. So here is my first attempt at catching up -not on everything that has happened since our last posting, but at least on some of the highlights.

We arrived back in Marina di Ragusa two weeks ago and we're finally almost ready to throw off the docklines. This is actually the second time we've been here this year. On our earlier visit, we arrived on March 26th and quickly came to the realization that almost none of the work that we'd commissioned to have done on Aisling during the winter had been completed. This wasn't a complete surprise, since we knew that the boatyard was behind schedule because of the weather. Yes, Sicily had a tough winter too, although here that just means lots of rain rather than the mountains of snow that we got on the east coast of Canada. Anyway, as a result of this bad weather, Aisling was still high and dry, and likely to be that way for at least another two weeks. So we moved into a nice apartment on the hill above the marina, resolving to take a break and enjoy a bit of a vacation. We visited our friends, hosted a couple of dinner parties, ate lots of pizza and (it must be said) drank lots of wine. I worked at improving my Italian and Rick worked on the boat. We went running in the mornings and drank cappuccino in the Marina Bar. We learned to make our own decent imitation of cappuccino using a stovetop Moka. But by mid-April, all of this was starting to wear a bit thin. From the lack of progress in the yard, it was obvious that we wouldn't be sailing anytime soon.

Luckily, we had other plans anyway. On April 15th we flew to Marseille in the south of France. Our friends Ni and Krissy met us at the airport and together we drove to La Grande Motte, where we had tickets to attend the multi-hull boat show, aka "le Salon International du Multicoque".

You may be wondering why two people who own a very aged Slocum mono-hull would want to attend a boat show dedicated only to multi-hulls. The answer lies in the trip to Malta that we took with Ni and Krissy onboard Finalmente last October. Finalmente's performance in light wind and comfortable accommodations got us thinking: maybe we should consider moving to a multihull? We'd been toying with the idea of looking for a boat that had a bit more space to accommodate our family and guests. And it isn't only Aisling that's getting old: the idea of a few more amenities and labour-saving devices is definitely becoming more appealing as we get older. We weren't completely sure what kind of boat we wanted, but we hoped that going to the show would help us make the decision.

Mention the south of France to most people and it conjures up visions of poppy fields, delicious French food, good wine and glimpses of the rich and famous. Being in La Grande Motte was nothing like that. It's an artificially created resort with weird architecture and little of interest to see. We had our first meal (and definitely the most affordable) in a pizza joint, where the wine was off and the mosquitoes were plentiful. Nonetheless, we had a great time. During the next three days, we made our home at the local Best Western, which was actually pretty nice. Here's Rick reading the newspaper by the pool in the morning. 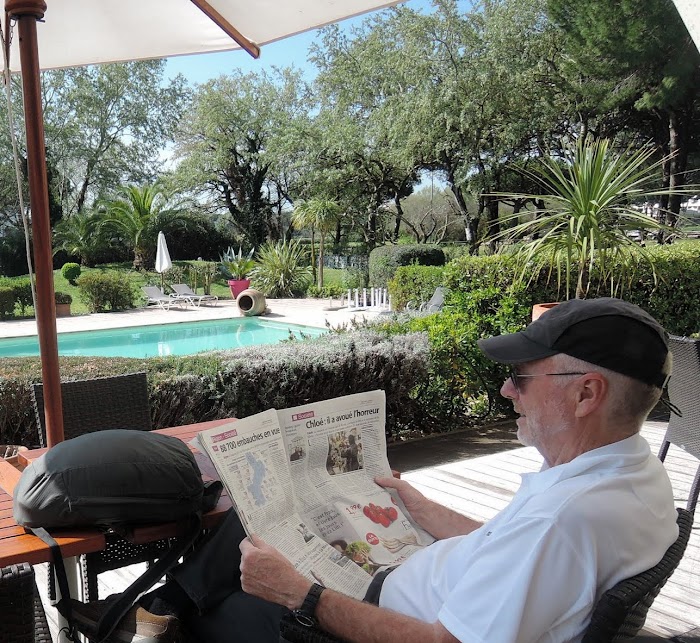 We learned a lot about multihulls, had some great meals, and enjoyed a visit with Rick's brother Al, who came down from Paris for the weekend. On Friday afternoon, we went for a test sail on an Outremer. On Saturday afternoon, Rick and I drove all the way to Canet to test sail a Catana 47 and tour the Catana factory. The bonus was the view of the Pyrenees behind endless fields of vineyards on the drive to Canet, and a nice lunch in Leucate on the way back. Meanwhile, Al, Ni and Krissy stayed behind and did their own test sail on a Nautitech Open. Krissy snapped this photo of Al at the helm. 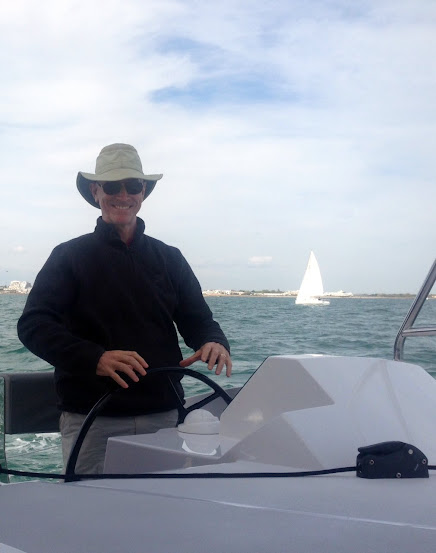 That night, we reconvened for a wonderful dinner at the local Yacht Club, joined by Al's friend Janice. As we walked to the car, a large flock of flamingoes flew overhead. A nice end to the evening.

I don't imagine many people attended the show on Sunday. We woke to torrential rain and fierce thunder, which continued as we drove toward Italy with Ni and Krissy. Our destination: the beautiful Ligurian town of Santa Margherita, where Ni and Krissy's daughter Nicole makes her home. Just as we crossed the border into Italy, the sun came out. We arrived in Recco just in time for an early dinner at one of Ni's favourite places, Pizzeria del Ponte, where we had delicious pizzas and Genovese focaccia. And the wine was good too. Viva l' Italia! 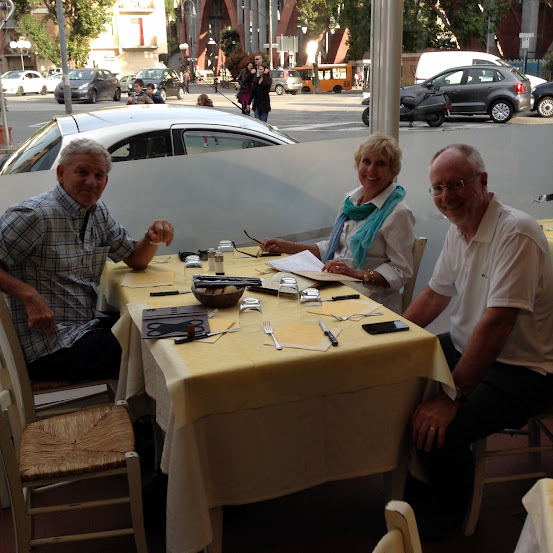 Next up, our tour of Liguria and Tuscany. That is, if we manage to do a bit more catching up before we set sail!