What a time to be in Greece! With the financial crisis taking centre stage in the world news, we begin to wonder whether our decision to come here was ill-advised. But in sleepy Preveza, it is hard to detect anything amiss. Most business is being conducted on a cash-only basis ("capital control", one clerk explains) but that's really not unusual here. A car drove by the boat with a loudspeaker, saying something about "ochi" ("No") and a "catastrophe" but otherwise, other than the queues at the cash machines, everything seems normal.

However, the reality is really very worrisome for the residents of Greece. At the cash machine, we meet a beautiful young woman standing in the long line-up with her baby boy Christos. She is almost in tears as she expresses her frustration with the situation. "My parents' generation had a party spending money they didn't have. And they didn't pay their taxes" she says. "Now it will be left on our shoulders to pay the price." She is permitted to withdraw only sixty euros a day, but since there are no 20 euro bills in the Bancomat she actually gets only fifty. The withdrawal restrictions do not apply to foreign cards, but we decide it is best not to mention that. Another young woman tells Rick that she will vote "no" in the upcoming referendum. She is defiant. "Why did they lend us this money when they knew we could not pay?" she asks. It's a valid point. With Greece already on its knees, the proposed austerity measures will likely worsen a situation that is already dire.

But the grinding Greek bureaucracy is still in good health. The morning after our arrival, we tackle the tedious task of getting our cruising permit. First we head for the tax office to pay the fee for a DEKPA, following the instructions that the Port Police officer had given us the day before. It's a long hot walk, made more difficult by the challenge of following a map that has the street names written only in the Greek alphabet. When we finally arrive, we discover a large office with lots of staff, but no clients other than us. Of course, at a time like this, it makes perfect sense that people would not be placing a high priority on paying taxes. In any case, we complete our transaction in less than 10 minutes and head back to the Port Police station. A different officer is on duty. "Who told you to pay this fee?" he asks. "Only European-flagged boats can get a DEKPA." We'd been told that our Italian residency cards entitled us to use the DEKPA, but we should have known that it was too good to be true. Now we must return to the tax office, then go to Customs, and then return to the Port Police to finish the process. The police officer looks skeptical when Rick says we'll see him in a little while. "Maybe" he says "but if you don't finish today you can come tomorrow".

The Customs office is at the Port, and easy to find, but we walk an extra kilometer trying to find a way through the large fence that surrounds it. We stop to ask directions at this yacht charter base, but just get barked at! 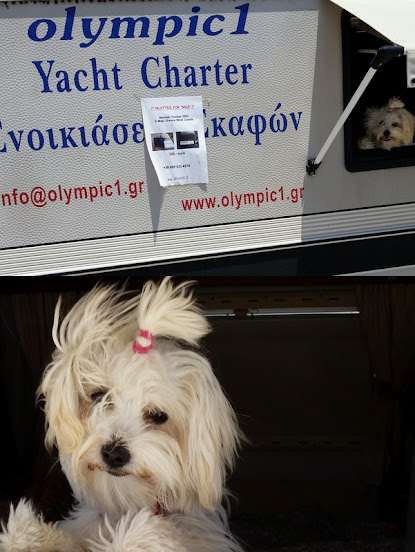 We finally find a different road that takes us to the gate of Customs office. Inside, time seems to have stopped about two decades ago. Massive ledger books are shelved along the walls, stacks of documents cover every available surface and the air reeks of stale cigarette smoke. Communicating with the Customs officer is quite a challenge, but when there is a flurry of loud stamping we know we have almost finished. By the time we walk back to the Port Police station and finally get our Transit Log, we've wasted three hours and walked over 8 km. To add insult to injury, the waterfront taverna where we'd hoped to have lunch is closed. We make up for it by going out to dinner that evening and devouring large plates of calamari and marinated fishes, served with boiled greens in a vinegar dressing. Never let it be said that we are not doing our part to inject some cash into the Greek economy.

Other cruisers are obviously doing the same. Within two days we meet four other boats that have over-wintered in Marina di Ragusa. Americans Doug and Barb (Plankton) take our lines when we arrive at the dock, and Aneke and Ton (Lunde) are at our bow. We meet Samantha and David (El-Ar) at Cleopatra Marina and, best of all, our good friends Rimmer and Toos (My Fair Lady) arrive. We decide to spend another night in the marina so that we can have dinner with them. It's a wonderful evening, and we are so sorry that they are flying back to Holland the following day. 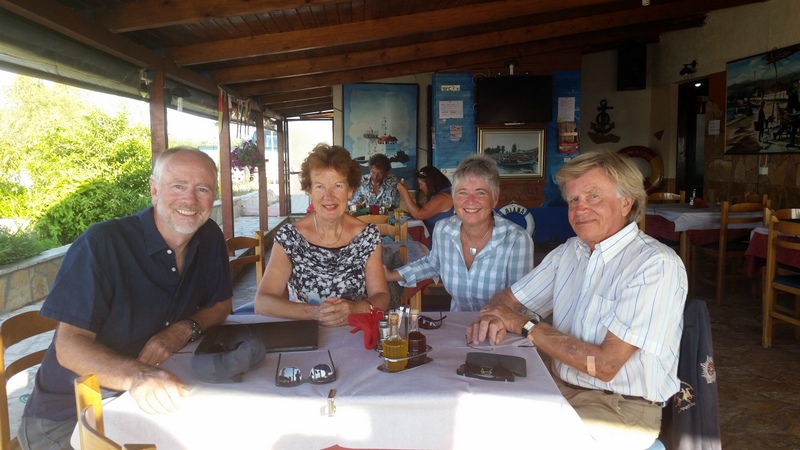 I almost forgot to say that Rick had wanted to try out the restaurant in Cleopatra marina the previous night, but his plans had been foiled by Neptune's equivalent of "manna from heaven". As he stood on deck, a school of sardines leaped into the air and lay squirming on the dock. A less enterprising person may have left them for the gulls, but Rick grabbed a bucket, threw them in and proceeded to clean them. All thought of going to the restaurant disappeared because otherwise, these little fishes would have died in vain! I fried them up and served them with a tomato-caper pasta. Delicious, and well worth the ribbing we took from our friends on Deep Blue when Rick made the mistake of telling them about it via email!

Our next stop is Two Rock Bay, where we have arranged to meet Ni and Krissy on Finalmente. Two Rock Bay is the kind of place we dreamed about when we decided to go cruising. As soon as we get our anchor set, Ni and Krissy swim over to our boat. The water is so clear that we can see the small fishes swimming around them. 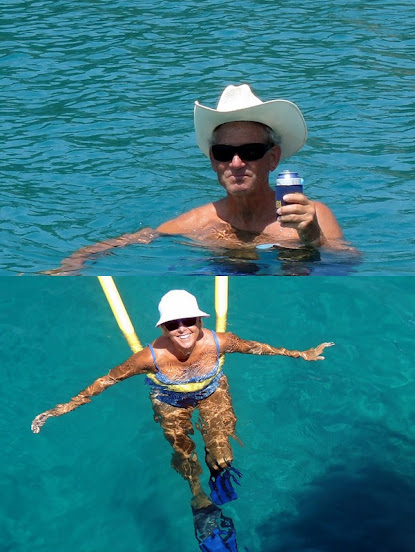 We have lunch together, drink some wine and go for a swim. That evening we have a delicious dinner on Finalmente.

The next morning, Ni and Krissy suggest that we check out the "Cantina" that overlooks the beach. We can have iced coffee and play a game of rummy tiles at a picnic table under the trees. It's a perfect plan, but when we climb the steep rickety stairs up the cliff we discover that the cantina isn't open. A man named Onassis (?really?) explains that the owner Christos may not open today, because it is summer. Which doesn't make a lot of sense, but neither does much else that Onassis tells us. Rick and Ni go back to the boats to pick up some drinks and snacks, while Krissy and I stay behind in the shade.

Naturally, just as we see the guys putting the cooler into the dinghy, Christos arrives. Onassis has called to tell him that he has customers waiting. We have no money, but he makes us two "freddocinos" and says we can pay him later. The guys buy some beer, we unpack the rummy tiles and Rick and I do our best to remember the rules . 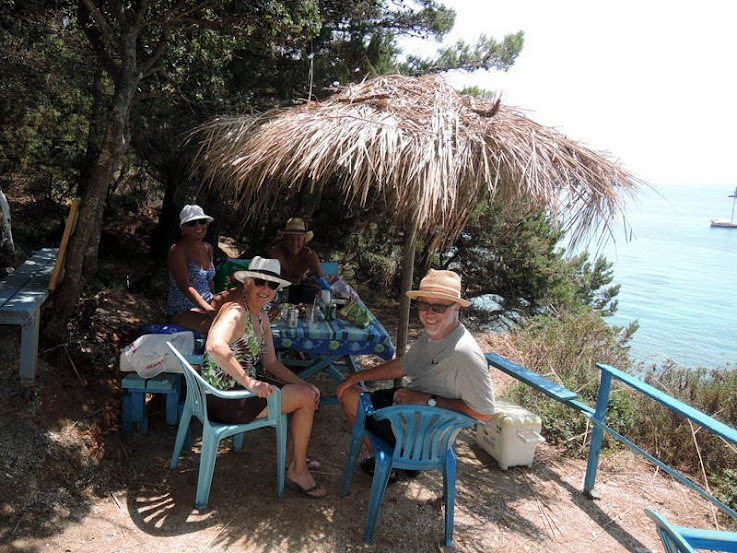 But after Ni beats us in two consecutive games, we decide we've had enough. We swim out to the boat to pick up our snorkel gear, spend an hour in the water, and then climb back up the rickety stairs to try Christos' hotdogs. Onassis is still drinking ouzo under the tree. He tells us that he will not vote in the referendum that will take place the next day. But he is firm on one point. "We took the money" he says. "We have to pay it back." 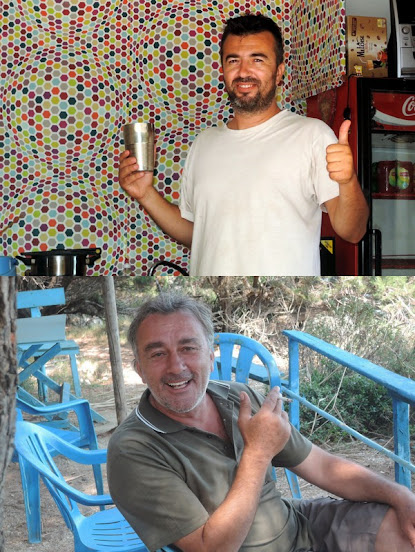 That night, we thaw out the last of Giani's pork tenderloin and we all have dinner on Aisling. Ni and Krissy will leave early the next morning to pick up friends in Preveza, but we decide to stay for another day. Why rush away from paradise?
More
Comments
Newer Older
Contents