With an almost endless choice of beautiful anchorages to choose from, and the mercury now edging toward 40 degrees, you may wonder why we chose Vathi, the capital of Ithaki, as our next stop. We'd already visited Vathi twice, and we knew we wouldn't be able to swim in the murky waters of the harbour. But Ithaki is one of the most beautiful islands in the Ionian -or in all of the Mediterranean, for that matter. It was less than a four-hour sail away, and I wanted to see it one more time. In his usual gentlemanly way, Rick agreed. Setting sail from Kastos shortly after 10, we had our anchor well set in the mud near the head of Vathi harbour by 1.30 in the afternoon.

To English speakers, Ithaki is better known as Ithaca, agreed by many to have been the home of Odysseus. Note I say, "agreed by many" and not "agreed by all" because no one knows whether Odysseus was a real or mythical character, nor whether any of the places described by Homer actually existed. Still, it's fun to read the stories and think of the possibilities.

By the time we have woken up from our afternoon naps, it is time to go ashore for a beer and track down some dinner. We recall a delicious lunch that we'd had with Ni and Krissy in a small taverna during our last visit, but can't remember the name or exactly where it was. A conversation with a Canadian on a neighbouring boat, who had lived in Vathi for several years, convinces us that it must be the Taverna Tpexanthpi (pronounced Trechantiri). Off we go, and take a small table on the sidewalk where we can watch the world go by.

The food is as good as we remembered, made with fresh local ingredients, including a complimentary dessert of rice pudding made with milk provided by the owner's goats. The octopus salad had capers and caper leaves that had also come from the owners' land. But, though it shames me to say it, the french fries were my favourite thing. 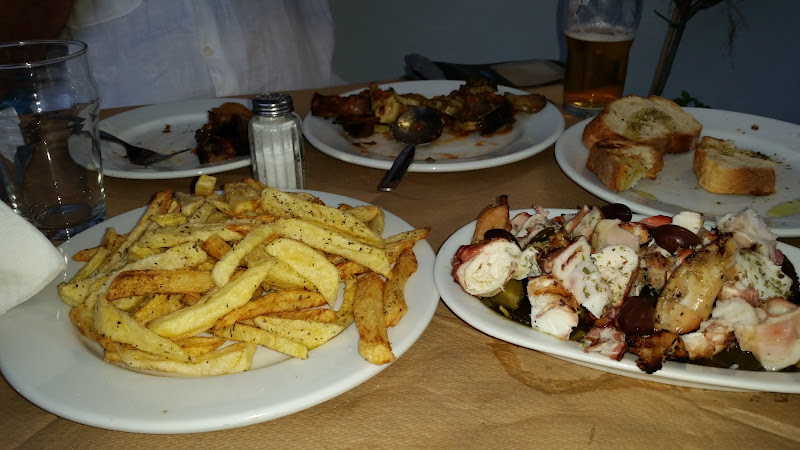 Returning to Aisling, we sit in the cockpit for a while, looking at the stars and the lights twinkling in the hills above Vathi on both sides of the harbour. "It's like floating in a big amphitheatre" I say, and later discover that this is exactly how some guidebooks describe Vathi harbour.

The next day, we do little other than buy a few groceries, catch up on emails and take the dinghy to the small beach at the mouth of the harbour to cool off. Now the question becomes whether to stay for another day, or move on. We have made a bad choice in anchoring too close to the town, where the smell of sewage wafts over the harbour when the wind blows from the west. But we finally decide to stay for one more night, rent a car and drive around the island. We have done this before on a scooter, but this time it is too hot to even think of putting on a helmet. A day in the air conditioned comfort of a rental car is just what we need.

Instead of taking the inland road as we had on our last drive, we head up the west coast toward Stavros, enjoying beautiful views across the water to Cephalonia as we go. Unfortunately, it is difficult to take photos on the steep winding roads. Also, I have forgotten my camera. Fortunately, Rick has come better prepared. 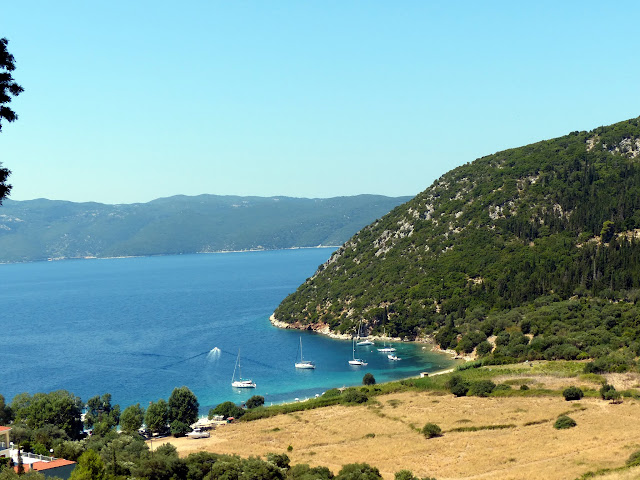 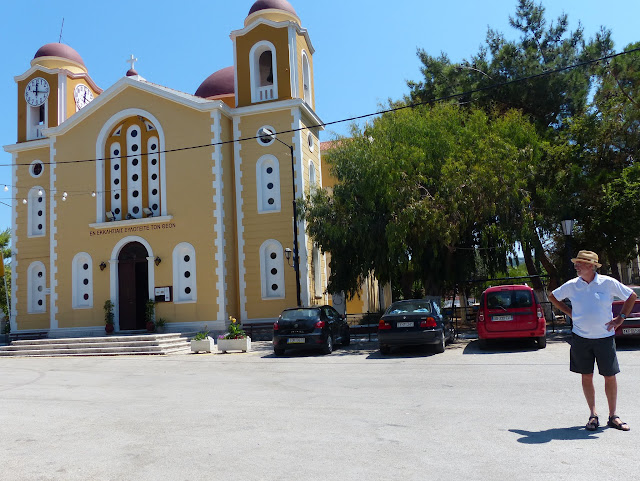 In Stavros, a bust of Odysseus and a model of his palace stand in a small park near the church. Some archeologists have speculated that Pelicata hill, near Stavros, could be the site of the palace. It's requires a bit of credulity to accept that any such place existed, but why spoil the fun.

We visit the small archeological museum, where we see clay bowls, jugs and figurines that date back as far as 3000-2000 BC. It's astonishing to realize that these fragile items have survived for more than 4000 years. Maybe the idea of Odysseus' palace isn't so far-fetched after all. 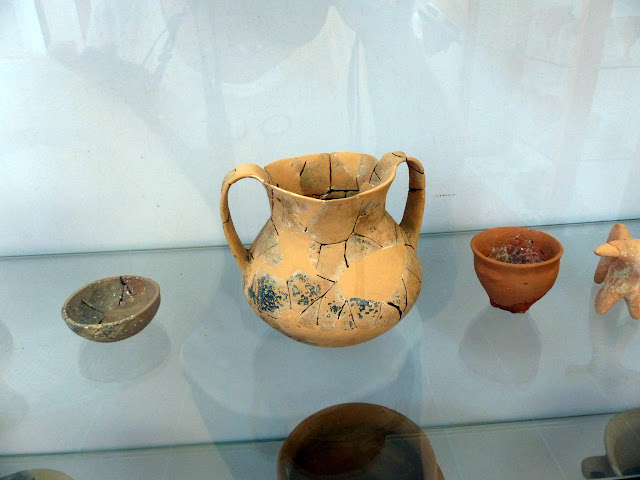 Next we drive up to the north tip of the island to Exoghi, a mountain village with spectacular views. The road is steep, narrow and winding, and Rick worries that we may not be able to turn the car around, but when we reach the church we are able to park in a spacious courtyard, under a eucalyptus tree. We have just missed the festival of Agia Marina, which took place the previous day (July 17th). The price list is still posted on the trunk of a tree: 2 euros for souvlaki, 3 euros for salad, 1 euro for bread, 2 euros for a beer or glass of wine...imagine the reaction if you tried serving beer and wine at a church festival in Cape Breton! 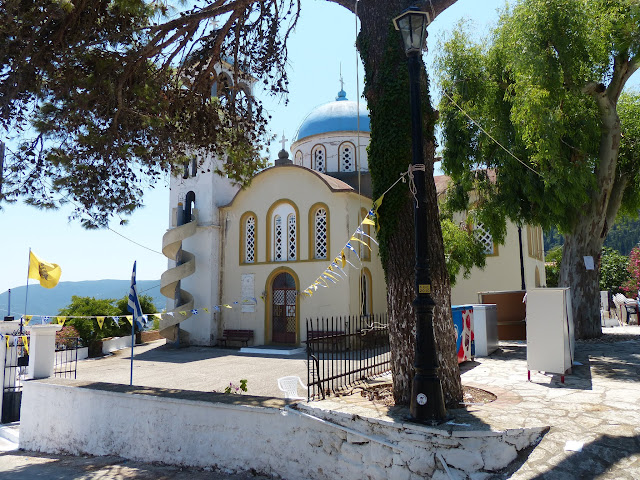 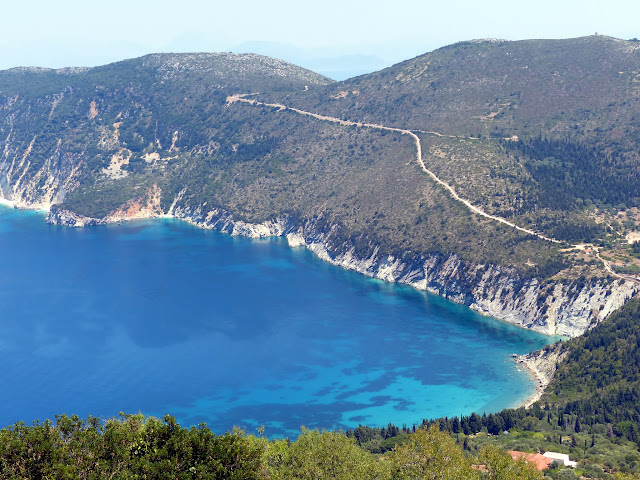 Back to Stavros for a late lunch at the roadside restaurant (? O Tseligkas) where, 6 years before, we had first tasted briam, one of Rick's favourite Greek dishes. Sadly, they do not have briam available today. Now we will never know if it was really as good as we remembered. The roasted eggplant and dolmades (vine leaves stuffed with rice) are delicious, but the stifling heat suppresses our usually hearty appetites. It's a relief to get back into the air conditioned car. A dead end road takes us past the village of Frikes and then to Kioni. Both are photogenic but touristy. 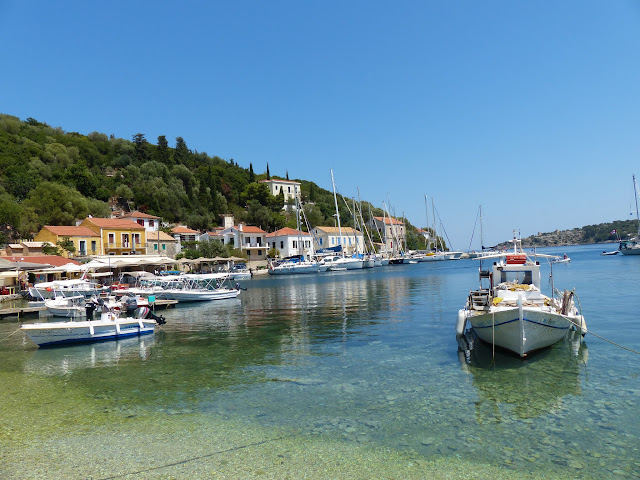 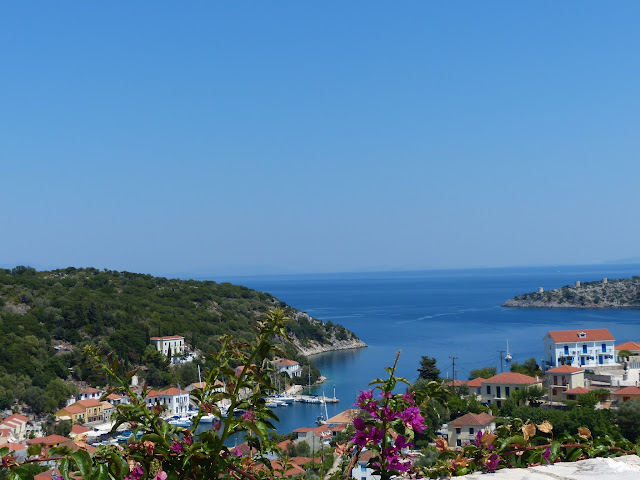 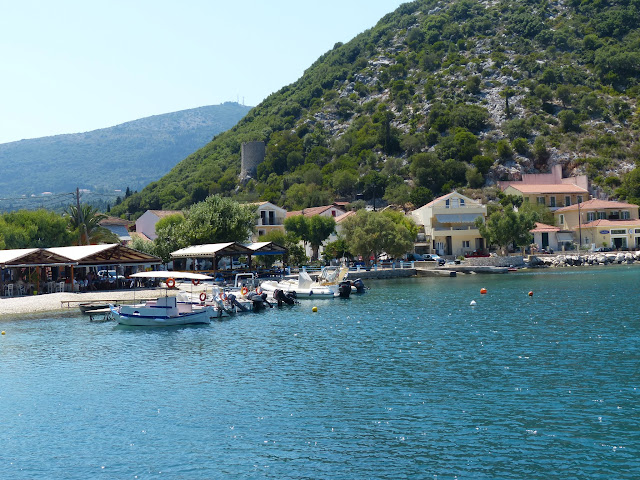 From the crossroads back at Stavros, we head inland and uphill toward the monastery of Kathara, near Anogi, 500 meters above sea level. We had also visited this place in 2009, and had been amused to see a sign in four languages that said "please close the door so the goats don't come inside". For some inexplicable reason, the parts of the sign that mentions that goats has been blacked out, even though the goats still roam freely outside the gates. 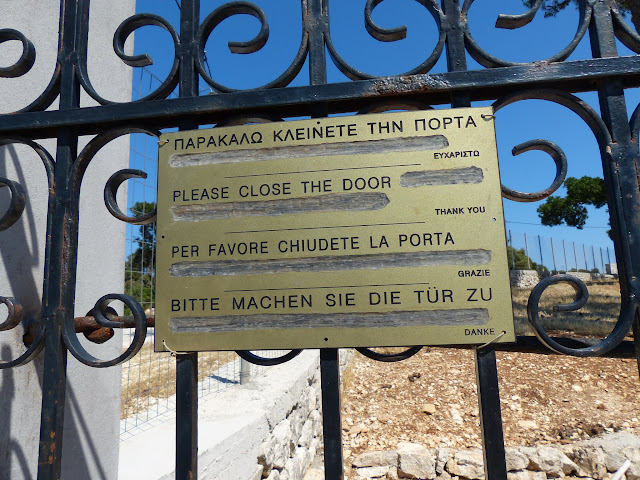 There is no one there but us and the caretaker, who sits quietly working on her crocheting. Inside, the church is a peaceful and cool retreat. 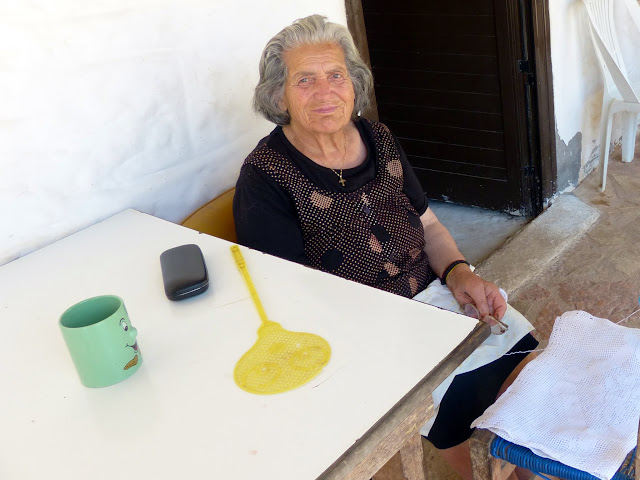 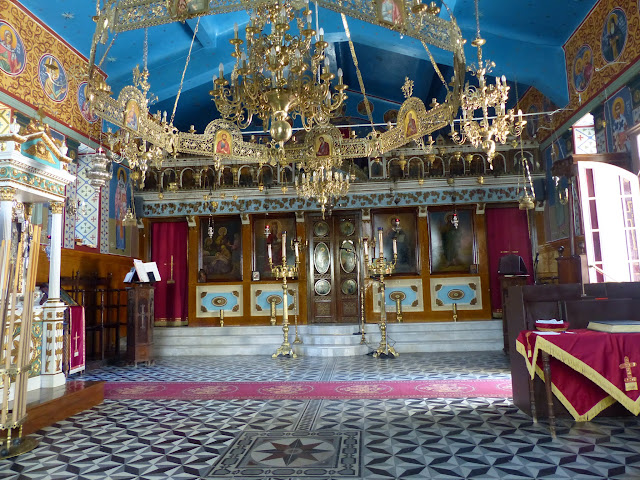 Around one of the icons hang many "tamata"; metal votive plaques with images of body parts. For example, a person praying for relief from arthritis, or giving thanks for successful knee surgery, might hang a plaque like this one.

Our last stop is the village of Perachori, sitting high in the hills above Vathi town. Even though it is very close to Vathi, we had not even known of its existence on our two previous visits. It's a charming place, with sweeping views of Vathi harbour, abundant flowers, small courtyards shaded by grape arbors and farm animals peeking over stone walls. 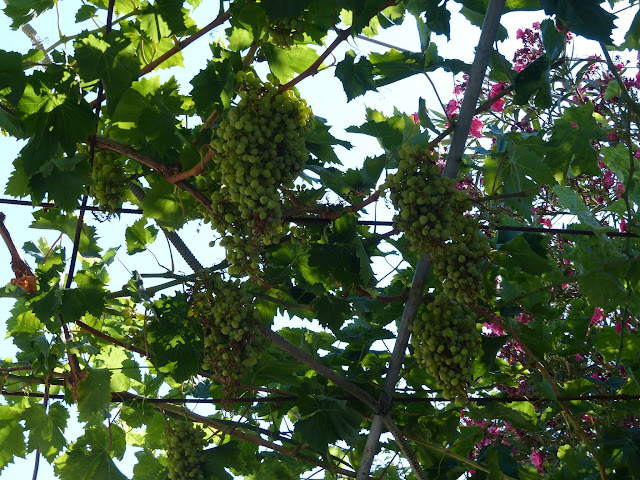 Wouldn't you like to look at a view like this while you hang your laundry out to dry? 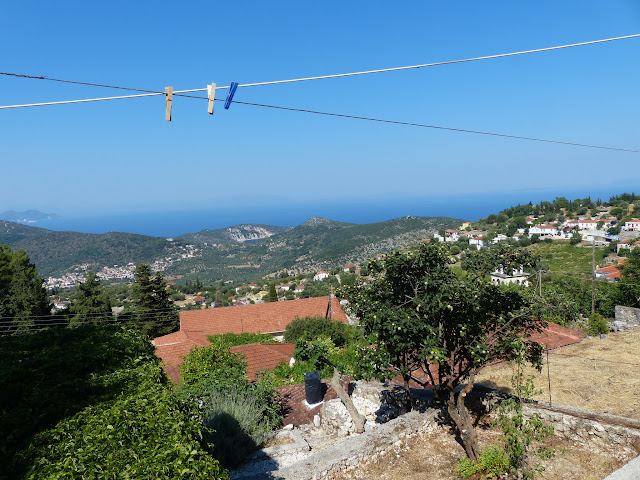 Our last stop is the supermarket, where we load the car with the heavy and bulky items that are difficult to carry when we don't have transportation. We are well provisioned for our next stop in Varko Bay: the perfect place to escape from the heat.
More
Comments
Newer Older
Contents