Corfu: Castles, Choirs and Clothing by the Kilo! Anchoring underneath a castle always brings a certain sense of awe. This is something that we definitely can't do in Nova Scotia, unless you count the one in Southwest Cove, which isn't a real castle even though it looks pretty cool. So, as we drop our anchor in Garitsa Bay underneath Corfu's Old Fortress, we are feeling very happy to have arrived in such an historic place. Perhaps the skipper of the large powerboat that is hard aground aft of our port side got distracted by the view. But a more likely explanation is that his anchor dragged in last week's blow, so we make sure that our trusty Spade has dug in well before launching the dinghy to do a bit of exploring. We'd anchored under castles before, but this is the first time we've ever driven our dinghy through a moat. 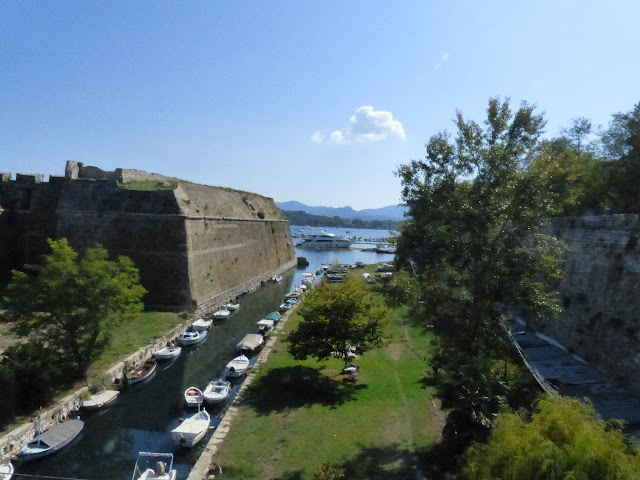 The manager at Mandraki marina kindly lets us park our dinghy in a corner of their dock; then we have an interesting walk through the fortress to get to the town. We just hope we'll be able to get back through the gate when we need to go home.

I'd expected Corfu town to be full of British tourists and pubs selling Guinness and full English breakfasts. In fact, things are pretty quiet as we emerge from the ramparts of the castle and walk down the Liston, the main promenade of Corfu town. Corfu (known in Greek as Kerkyra) was controlled by Venice for over 400 years, between 1386 and 1797. Thanks to the strong Venetian fortifications that surround the old town, Corfu was never under Ottoman rule as most of Greece was. Corfu's Venetian past is evident in the Italianate architecture, and even the name "Liston" harks back to the Venetians, since it is the Venetian term for a marble slabs used to pave squares or avenues. A cricket game is just finishing up on the pitch beside the Liston, perhaps a legacy of the 50 years during the 19th century when Corfu was a British protectorate. We might have watched a bit of the game, if only we'd known the rules. Inside the town, the streets are quiet and most of the shops are shuttered. We've done it again: arrived in a new place on a Sunday afternoon. We've also arrived without our cameras. Correction: I have forgotten my camera. Rick has remembered his, but it doesn't have an SD card inside, because I removed it to upload the photos onto my computer and didn't put it back. It is a tribute to his patience that he doesn't even get cross about it. Luckily, our phones take pretty decent photos. 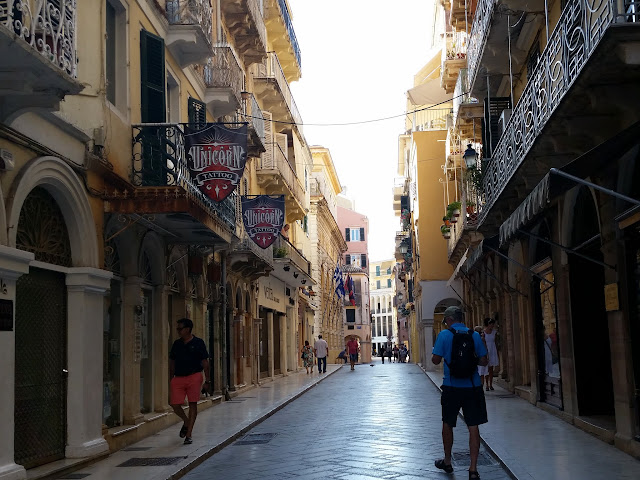 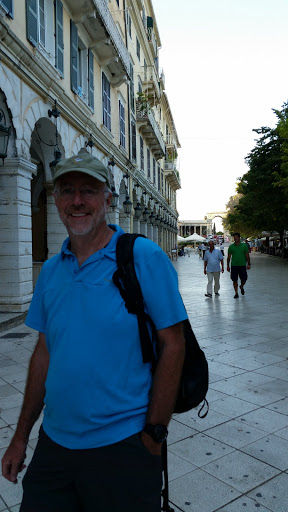 Not sure where to go or what to do, we find a little café beside the Liston, have gelato and search Trip Advisor for a good restaurant for dinner. Dessert before dinner - we haven't done this before! The gelato scoops are enormous, so it's a good thing that our chosen restaurant, the Athos, doesn't open until 7.30. This gives us time to do a bit more exploring and walk off the gelato. In a small shop in a side street, we browse through the clothing racks and chat with the owner, who is very happy to meet someone else who had been in the garment business. "It's not an easy business" he said "but I like using psychology to sell". He pronounces the "p" in psychology in a most charming way. His p-s-ychology obviously works on us, because we buy a beautiful blue linen shirt for Rick, and don't haggle about the price even though we know we should. Dinner at the Anthos restaurant is delicious. Predictably, we both order the same main course: seared tuna strips with a balsamic sesame glaze. We decide that we might be able to prepare a similar dish at home, if only we could find tuna that fresh.

As we walk back to the Fort, the Liston has suddenly come alive, with hundreds of people out for their Sunday evening strolls. Making our way through the castle to the yacht club, we hear the strains of choir music drifting toward us. We wonder if perhaps it is a recording, but then we also hear violin music through an open window and see a man playing a violin in a small studio, with an older man providing direction. The violinist sees us watching, and smiles to acknowledge us. It seems there is a music academy inside the fortress. It all quite enchanting, but the return trip through the moat is a bit eerie in the dark, and there is barely enough space for us to squeeze through between the boats rafted up along the sides.

The next day, we head toward the streets near the New Fortress in search of the daily market. Lots of fresh vegetables, fruits and fish are on display, but the most interesting thing is the honey. We taste several types (acacia, thyme, wildflower) and realize they each have surprisingly unique tastes. But they are all delicious, and I leave with jars of several varieties in my knapsack. Greek yoghurt with honey and walnuts has become our new favourite thing for breakfast. During the walk back to the centre of the old town, the streets are a bustle of activity and construction. It looks like those lovely tiles require a lot of effort to maintain! 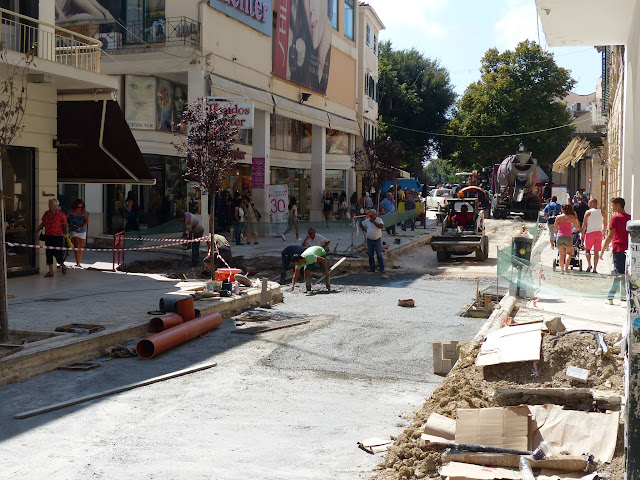 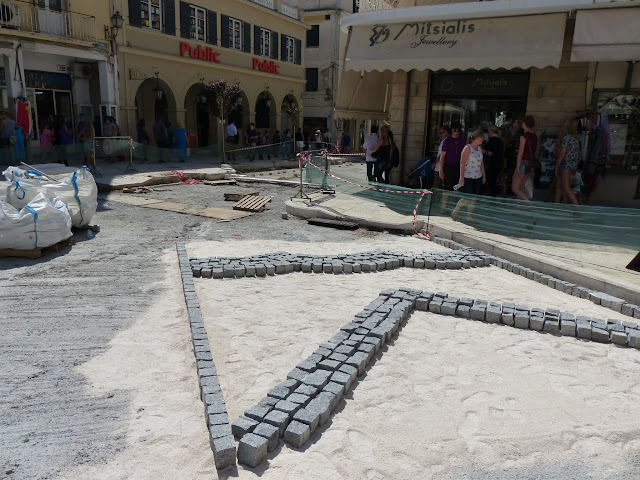 A snap election has been called in Greece, and we see flyers on the windshields of cars as we walk along. The one in the photo below is for Popular Unity, a party that favours Greek withdrawal from the Eurozone. It seems to point out that Greeks had said "Oxi" (no) to austerity in the recent referendum (but the government proceeded with the bail-out agreement). A week later, Alexis Tsipras's Syriza party prevails, and the Popular Unity party does not get enough votes to win even a single seat.

We spend an hour shopping for cool shirts for Rick in the Columbia store. (I mean "cool" as in lightweight, as opposed to "cool" from a fashion sense, because the weather is still blistering hot.) Then we have lunch at a family-run sidewalk restaurant a few steps away. I've been enjoying the challenge of deciphering words using the Greek alphabet, but the name of this restaurant really stumps me. Later, with a little help from Google translate, I discover that the large letters on the restaurant sign simply say "Beer and steakhouse" and the name of the restaurant is Chrisomalis. A poster above the door, commemorating 175 years of the Corfu Philharmonic Society, has a 1920 photo that shows an establishment called the "Anglo-American Bar" in the same location. The waiters look like they might have been around in 1920, and do not speak English. We try two traditional Corfu dishes: pastitsada ("rooster" in tomato sauce served with pasta) and sofrito (beef stew in a white wine, vinegar, garlic and herb sauce). Neither are gourmet fare, but both are very tasty, and could be nice comfort meals on a cold winter night. 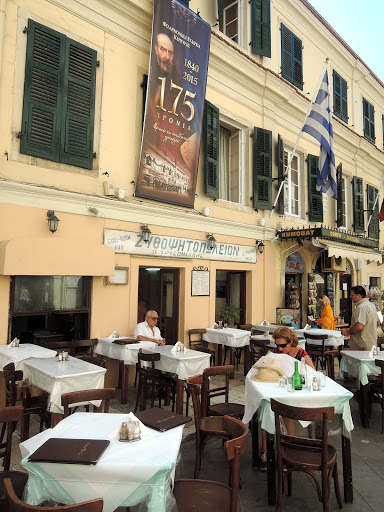 We top off the afternoon with a walk through the area around the Liston and the fort, and through the grounds of the Museum of Asian Art. 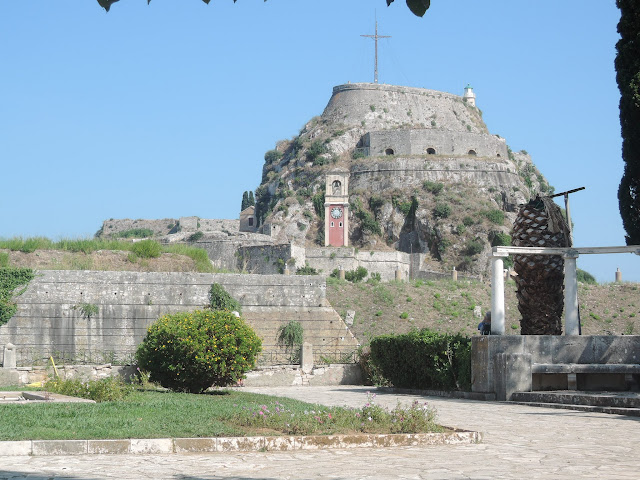 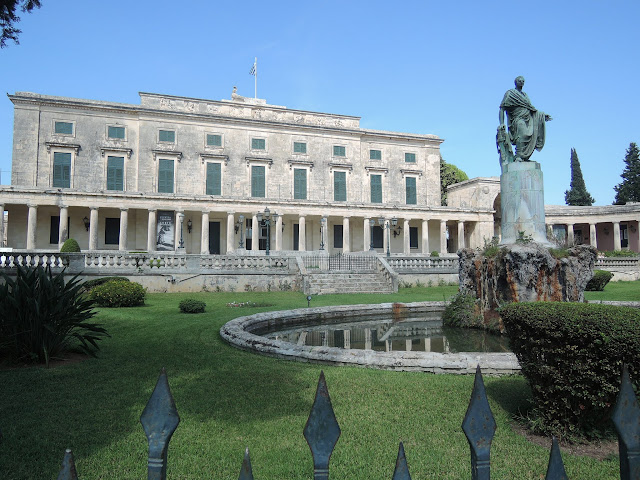 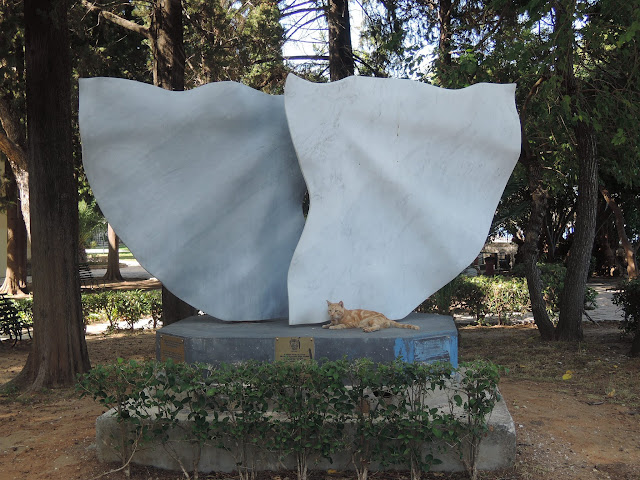 When we return to Aisling, we see that we are surrounded by boats flying American flags and Cruising Club of America (CCA) burgees. It is the CCA's Ionian cruise, and now we are doubly sheepish that we haven't registered for it. But partial registrations weren't an option, and we could not join the full cruise as we need to make tracks for Albania and then Sicily. We head around the corner to Gouvia, where we plan to check out of Greece the following morning. That night, as we sit at anchor in a small cove near the marina, I feel sad that our travels in Greece have come to an end. But as it turns out, that isn't quite true after all.

The next morning, when Rick goes to the Port Police to check out, they inform him that because we are not a European-flagged boat, we must go to the main Port in Corfu town to check out. This means we have to either spend the entire morning sailing there and back, or take a cab, at a cost of about 50 euros for the return trip. Ouch. Suddenly we have a better idea: Nikos Bike Rental has motorcycles available for only 20 euros for the day. Once again, Rick's motorcycle license comes in handy, and ten minutes later we are strapping on helmets and buzzing toward Corfu town. When we spot a Lidl supermarket along the way, we're even happier. We've just finished the last of the wine we brought with us from Sicily, and this will be a good place to stock up. At the Port, we finish the check-out process in record time. The obliging Customs officer even lets us keep our cruising permit, in case we want to come back to Greece after our visit to Albania, telling us we can mail it back otherwise.

After a quick stop at Lidl, we are ready to set sail.
On the other hand....does it really make sense to turn the bike in without going for a ride? After a quick dinghy trip to the boat to stash our Lidl purchases, we hop back on the bike and head north along the coast. Initially there is lots of tourist sprawl. Here's where we can find our English breakfast! Get a tattoo! Buy English clothing by the kilo! Yes it's really by the kilo! But further along, the views become more scenic.

Our plan to visit the National Art Gallery annex in the village of Kato Korakiana are foiled, because it is closed for the day. We have a long history of at arriving at places on the wrong day, and we've learned not to get too perturbed when this happens. The village is very pleasant, so we don't regret making the drive. We double back to the coast, head further north and take the road toward the village of Spartylas. Up, up, up, around twisting switchbacks, through olive groves, with tantalizing glimpses of the coast below. It is difficult to find any safe havens to stop and take photos, but we eventually find a place to pull off the road. An eagle is soaring above an old olive grove.

Rick had noticed a taverna that seemed to have a great view a couple of kilometers back, so we decide to have lunch before heading back to Gouvia. At the Taverna Agnadia, the view is indeed wonderful, and the food is some of the best we have had in Greece, or anywhere in Europe for that matter. The highlight is a plate of fried artichokes served with a creamy garlic dip. The kitten at our feet clearly wants to try one, but they are just too good to share. The Dutch couple at the table next to us, who seem to know the owner, asks us who had told us about the taverna. They seem surprised to hear that we had found it by chance. 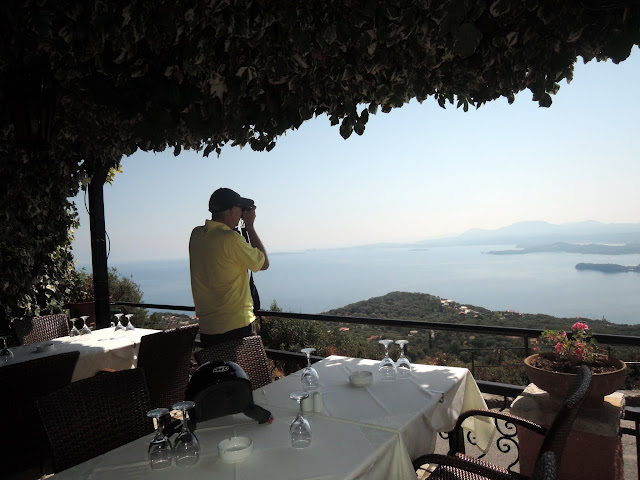 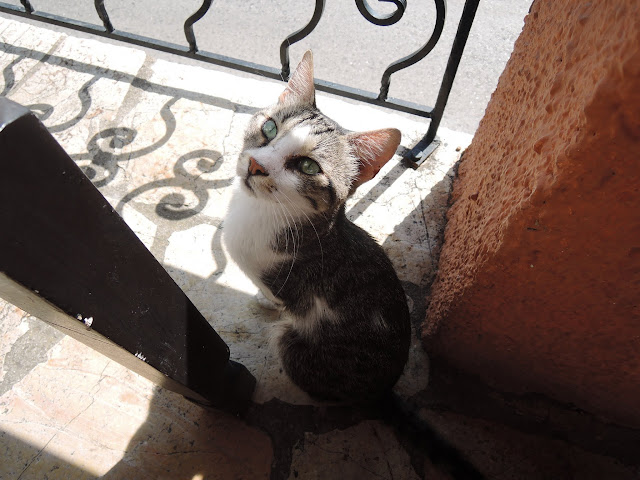 On the way back down the coast, it suddenly occurs to me that our passports have already been stamped out of Greece, and that we would have had a lot of explaining to do if anything had gone wrong. But all's well that ends well. We get back to the boat at 4 p.m. and wonder if it is too late to leave for Albania. But it is only a two hour sail away, and with a one-hour time difference we can probably be there well before six. So this time, it's really goodbye to Greece. At least for now!
More
Comments
Newer Older
Contents