An introduction to Albania Albania is just a stone's throw from Greece, yet for many years it was a no-go zone for cruisers. For most of us, the unpredictable weather in the Mediterranean provides enough of a challenge: who needs the thrill of sailing through waters that may or may not be strewn with naval mines? Until recently, many marine insurance policies didn't even provide coverage within Albanian waters. But lately, things have changed. We've met several cruisers who have visited Albania. Most, like us, were from outside the EU. Why? Because unless the owners of a foreign-flagged boat are prepared to pay a very big VAT bill, the vessel must leave EU waters at least once in every 18-month period. And the list of places in the Mediterranean to which one might escape is becoming shorter. Last year, we went to Tunisia. This year, after the shootings in Sousse, going to Tunisia didn't seem like such a good idea.

In any case, the idea of seeing Albania really appealed to us. We'd been told that it is a beautiful country, rich with history. In the spring, we'd met an Albanian woman named Adelina who was the cleaner and caretaker of an apartment we were renting. Adelina loved to chat, and she didn't sugar-coat the hardships she'd experienced in Albania. "We were so poor that we were hungry all the time" she said. But her face lit up when she described the beauty of her home country. "Is it more beautiful than Italy?" I asked? "Oh yes!" she exclaimed, "much more beautiful!" Well then. We should go.

Prior to 1992, a visit to Albania would have been impossible. Between 1944 and 1985, the country was under the iron fist of the communist dictator Enver Hoxha (pronounced Hoe-ja). The country was poor and isolated, with Hoxha eventually breaking relations even with other communist leaders, believing their approaches to communism to be too liberal. Following Albania's departure from the Warsaw Pact, it seems that Hoxha's obsession with security proceeded into the realm of paranoia. Thousands of ugly bunkers were constructed, not only along the coast and borders, but throughout the country. Hoxha's grip on the country ended only with his death, and it took another 7 years for the country to make the transition to democracy.

We sail less than 15 miles to reach Sarande from Corfu, but it quickly becomes obvious that we've sailed into a different world. Although the widely-quoted figure of more than 700,000 bunkers may be apocryphal, it isn't surprising to see four creepy-looking concrete domes glaring at us ominously as we enter the harbour of Sarande. I dive for my camera as Rick calls Sarande port control on the VHF. 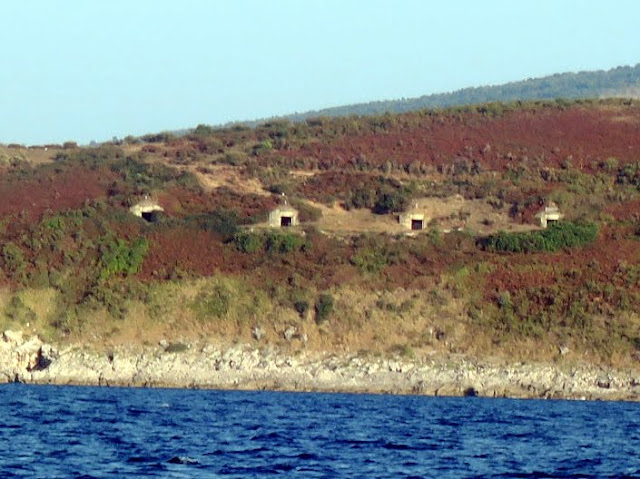 Even after speaking with port control, we aren't really sure where to go, so it's a relief to spot someone waving us in to the dock. It is Gherti, assistant to Agim, our agent, who is also the local port officer for the Ocean Cruising Club. We have emailed Agim in advance to request assistance, having been forewarned that an agent was necessary for the process of clearing in and out.

Gherti speaks perfect English, and quickly deals with the formalities. With our boat papers processed and our passports duly stamped, he climbs aboard to have a drink with us. A few minutes later we are joined by Carl and Mary Beth (S/V Hatty Lee), whom we had briefly met in Marina di Ragusa last spring. Hungry to learn about Albania, we launch a barrage of questions at Gherti, who provides us with a wealth of information. The first surprise is that Albanians don't call their country Albania. The true name of the country is actually Shqiperia (prounounced something like ship-ree-ya). The country's ancient history saw settlement by the Greeks, Romans and Byzantines, as well as a long era of Ottoman rule. In spite of this, the Albanian language is unique, bearing almost no resemblance to other European tongues. This in itself is a major isolating factor. The majority of the country is Muslim, although most are non-practicing due to the "official atheist" status of the country under Hoxha.

Life in Albania during communist times was very difficult, with those who spoke out against the government subjected to harsh measures. Even relatively minor misdemeanors could mean being assigned to the worst and most menial jobs. Although Gherti is too young to remember it, the official end of communism in 1992 represented a new beginning which allowed the country to begin a slow recovery. After 1992, Gherti's father returned to school and obtained a law degree. "My father has a strong character" Gherti tells us with pride.

One Gherti's most interesting stories involves the return of the gold from Albania's treasury, which had been looted by the Axis powers during World War II. The gold had been held in the Bank of England, but after the war the British refused to return it, because an incident in which two British navy ships struck mines in the Corfu channel, taking the lives of 44 men. It seemed pretty clear that Albania had mined the channel without warning the British, or at the very least had been aware that the mines were there. The British demanded reparations, the Albanians refused to accept responsibility and the matter dragged on for nearly fifty years. In 1996 the gold was returned to Albania, who in turn paid 2 million dollars in reparations to the British (and an additional 2 million to the United States for a separate property claim).

Our little party breaks up early, with Gherti going back to the office and Carl and Mary Beth heading to a waterfront restaurant for dinner. Before leaving, Gherti makes arrangements for a van with a driver and guide to take us touring the next day. The total cost will be 160 euros, to be shared with Carl and Mary Beth. Rick and I decide to spend the night at anchor instead of remaining at the dock. After all, the mines are long gone, right?
More
Comments
Newer Older
Contents