Just a quick note to wish everyone Happy Thanksgiving. We left Nanny Cay this morning after saying good bye to all the new friends we made. We arrived at Marina Cay this afternoon. Marina Cay is a very small island off the northeast side of Tortola. It is one of our favorite places in the world. We spent a few days here eleven years ago on our first learn to sail charter. There is not much on the island, a small restaurant, bar, library, and store. Very quiet and relaxing. 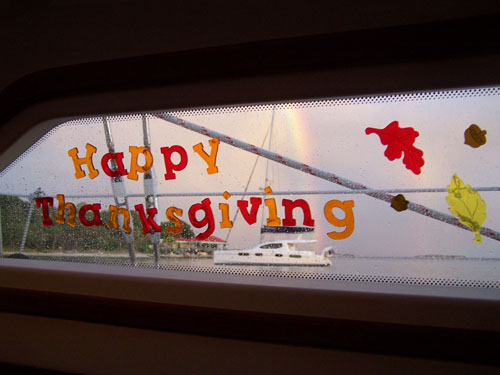 Janet is fixing Cornish game hens, corn bread stuff and all the traditional sides. A storm just passed as she was slaving over the stove. Notice the rainbow in the background. Life is good and we are very thankful for all of our blessings on this Turkey Day. We hope everyone has a wonderful Thanksgiving Day.
More
Comments
Newer Older
Contents