From the set of Pirates of the Caribbean II We arrived in Dominica (dom en E kah), the last of the Leeward Islands, late in the day in very blustery conditions. As we were looking for a mooring ball, a member of PAYS (Portsmouth Association of Yacht Security) greeted us from his skiff and told us he would direct us to a good mooring ball. His name (and his boat's name) is Alexis. Once you connect with one of the "boat boys" as they are called, they become your concierge for your stay. Alexis is a native of Dominica along with many generations of his family. To say that he is in love with his island would be an understatement. He spent most of the next day with us and his love of the island was infectious. Not only was he able to tell us what it was like growing up in a rain forest, he educated us about how protective his country is of the island which has preserved so much of its beauty.

In the morning, Alexis rowed us up the Indian River (he was not allowed to use his engine as the river is a national park). That is where we passed the location for one of the sets for the Pirates of the Caribbean II. The Indian River is where they shot the scene when the group goes to visit the gypsy, Calypso. We stopped at a little bar up the river and walked around the grounds. We had fresh squeezed orange and grapefruit juice which was delicious. Alexis took a machete and chopped up a coconut for us. Then he made me an origami bird using a palm leaf. 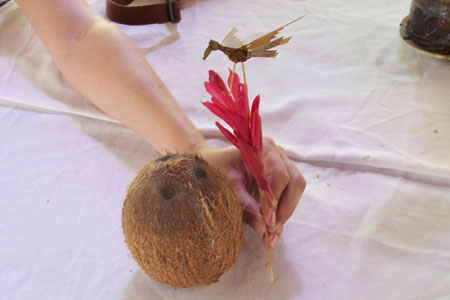 In the afternoon, we went with Alexis on a hike through the rain forest. We got him talking about what it was like growing up in the rain forest. He talked about the food that he and his friends ate from the rain forest and how his family used many of the trees and plants for medicine. He was very proud that Dominica was the residence of the oldest living woman on earth. She lived to be 128. He even took us by the house she lived in. There must be something to living in Dominica and youth because we thought Alexis was about thirty but he told us quite proudly that he was 45. Mark compares this rain forest to his experience visiting the Muir Woods Redwood forest in California.

Alexis and Janet on the Indian River. Wish we had better pictures of Alexis. Stay tuned for a You Tube video of Alexis talking about his life growing up in the rain forest. 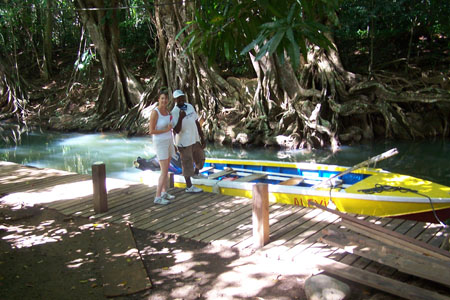 On the way back from the rain forest, we stopped along several plantations where we were able to pick grapefruit and oranges off the trees. Alexis picked me a bouquet of beautiful wild orchids. He also picked a cocoa fruit (the seeds produce cocoa). He opened it for us and we sucked on the seeds which were surrounded by a sweet pulp. Quite tasty.

We would highly recommend that any boater visiting Dominica ask to work with Alexis. His knowledge of Dominica is incredible. He provided us with a wonderful tour of the island and even sold me some snake oil which he was certain would help with my back pain. See photos of the rain forest and the rest of our experience in the gallery.