Zippin' through the rain forest canopy We were picked up at Eileen and Tony's hotel, Harmony Suites, at 8:25 am to go zip lining through the rain forest. This was Tony's idea and he thought if anyone would go with him it would be me. This seems remarkable given both he and I are afraid of heights. We all signed on for the adventure with some level of apprehension. Mark quickly asked one of the guides if anyone had died zip lining. I quickly informed him that the question was like "the number we don't talk about" while playing craps.

We were instructed to "empty our tanks" and get harnessed up. The harness reminded me of the ones we wear boating but I was happy to see that there was no crotch strap. We got to practice zip lining on one small line and then we were on our way. We took a tram to the top of the mountain and again got excellent information regarding the rain forest trees and flowers from our guides, Terry and Jibri. There were ten zip lines through the forest. All the zip lines were from platform to platform and all were off the ground at least 100 feet. The last zip line was the longest at 500 feet and landed you safely back to the ground.

During the last three zip lines, we were allowed to go hands free and what the guides called free style. We were given some excellent suggestions for this such as playing dead, bicycling, doing the back stroke, etc. By far the most creative was Mark who grabbed his ankles behind him and began flapping his knees in and out. Now, that was a sight to see. Mark quickly stated that Jibri had given him the suggestion. Eileen thought Terry, the rather serious guide, was going to fall off the platform laughing. He stated quite clearly that he had NEVER seen anyone do anything like that before. 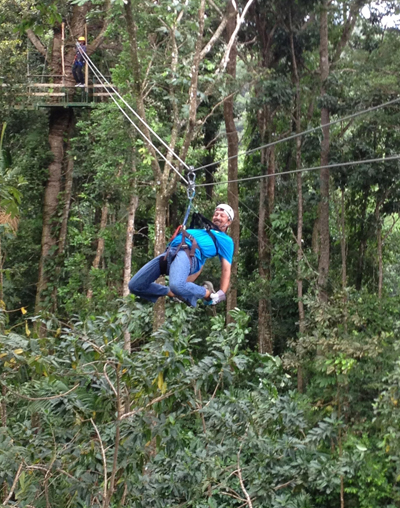 We all thought the zip lining was very worthwhile. Tony and I were relieved that it was not as scary (height wise) as we thought it would be. We were also unaware that we would have to hike as much as we did during the trip. We really zip lined around the top of the mountain and took the tram up and then down to the base of the mountain.
More
Comments
Newer Older
Contents