We arrived on Wednesday 2/22/12 after a 35 nm trip motoring all the way - again no wind. We anchored in the shallowest water in two months - 9 feet at low tide. Having gotten used to anchoring in forty feet of water suddenly we became concerned that nine feet was not deep enough.

We quickly discovered that iguanas are even more abundant on Isabella than they were on San Cristobal. In fact, there were many times that you needed to shoo them away in order to get through a walkway. They are not very pleasant looking but otherwise were no bother.

The animal life and sea life is again very abundant. It seems magical when you are able to see penguins, sea turtles, schools of small tuna, numerous types of other fish, sting rays and sharks right off your boat. I can say I was not anxious to swim off the back of the boat after seeing the shark.

We also took several tours while in Isabella. We took a tour of the Sierra Negra Volcano (the second largest active volcano in the world) and the Chico volcano. The trip started with a 45 minute bus ride followed by a 45 minute horse ride and finally an hour hike then you had to do this all over again on the return trip. We had 14 people on the horse ride and the horses were quite feisty. There were times when the trail went from six horses wide to one horse wide and all of the horses wanted to be first. Mark's horse amused himself by biting the behind of the horse in front of him. While we also had several horses who liked to kick. The horses also were very happy to veer off the path into the brush from time to time. Luckily, everyone was in good spirits about it and we spent much of the horseback ride laughing at the antics of the horses. Once off the horses we were at the Sierra Negra volcano which is approximately 10 km by 9 km wide with a two km deep lava dome. The view was incredible. After we saw this volcano we hiked through lava flows to reach the Chico volcanos. The volcanos are still considered active with the last eruption in 2005. We were able to put our hand in one of the holes which was generating an incredible amount of heat and steam. The craters and rock formations were amazing to see. The lava rock was very colorful in places and the overall view of the island at the end of the hike was breathtaking. It was interesting to see cacti and a ferns growing next to each other. It was not an easy hike and after two hours of hiking some were even happy to get back on the horses. 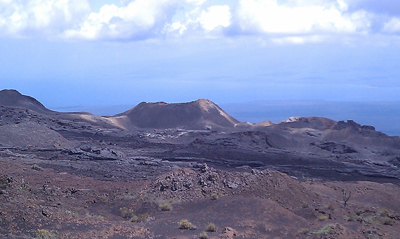 We also took a snorkeling trip through caves and bridges created by the volcano eruptions. The formation of the rock was very interesting and provided many a place to swim with sea life. The sea turtles in this area were huge. I swam with one that was almost as big as me. It was again less than five feet away from me and didn't seem bothered by my presence. We also snorkeled into caves where there were sharks. They were about three or four feet and came within a couple of feet of us. Our guide enjoyed stirring them up so they would swim out of the caves and come close to us. We also saw a native Galapagos lobster which was strikingly different from the lobsters we are used to seeing back home. We also swam with several sting rays which were several feet big. We so need an underwater camera!!!! 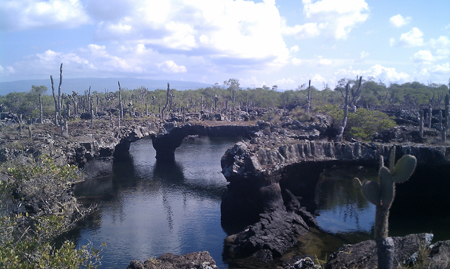 We again had no internet access on Isabella. Mark was able to skype his sister to wish her a happy birthday by standing in the middle of the street which was the only place he seemed to be able to get access. The call lasted five minutes before he was cut off. We are so frustrated that we have been unable to blog but are beginning to feel that internet access will become more of a luxury as time goes on.

We have posted our pictures of our time spent on Isla Isabella to the photo gallery.

We are leaving Isabella on Wednesday, 2/29 for Isla Santa Cruz the major port and hopefully it has internet access!