We arrived at Tahauka Bay in Hiva-Oa on Saturday, March 24 at 5:41pm eastern time (1:11pm local) almost 21 days since we left the Galapagos. The picture above is a portion of the bay showing At Last and some of the World ARC fleet. Overall, we feel very good about the trip. Janet keeps commenting about how much she likes the long passages but she was glad to see the island rise above the horizon at dawn that morning. We spent most of the last three days motoring with the engine due to lack of wind so this part of the trip was relatively uneventful. The main excitement was waking up in the main cabin and realizing I was sleeping with a fish. The flying fish must have a contest to see who can find the smallest opening in a boat and try shooting the gap like Jordan shooting a 3-pointer with nothing but net. 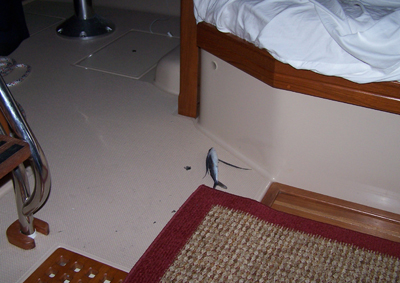 We arrived just in time for a massive down pour in the bay where the World ARC fleet is anchored. But the skies cleared also just in time for the islanders to host a formal ceremony welcoming the fleet to Hiva-Oa. The festivities included very authentic Polynesian dancing by a local dance troupe and a feast of native fruits, breads, vegetables and other delicacies. Toward the end the dance troupe got the entire fleet to join them in the dancing. 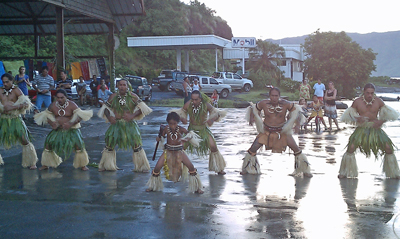 Most of the fleet spent Sunday at a Bed and Breakfast nearby owned by Alex, a Frenchman, where we listened all day to a local band playing native music. It was more like a jam session of ukuleles, guitars and other instruments. I plan to post a video on the internet when I can. We enjoyed a huge barbeque, Polynesian style and the party lasted from 11:00 am till the wee hours in the next morning for some of the younger in the fleet. This was just what the crews needed after such a long trip. 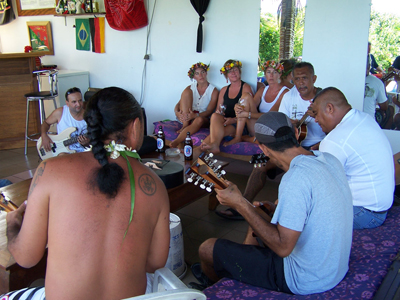 Monday was a day spent shuttling fuel in jerry cans from the dock to our boat, and a trip to town for grocery shopping and a visit to the stores (two) to see what is available. Today we will spend time doing laundry, cleaning the boat, and taking time to celebrate a birthday in the fleet at Alex's again.

The islands are breath taking, the people are very friendly and we can already tell that we are going to have quite an experience here. By the way, this port is the second largest and busiest in the Marquesas. There are only four boats here that are not with the ARC. It will feel like we have these islands to ourselves for the next two months except for Tahiti where there are more tourists.

We finally have some internet access and will be contacting our friends and family, catching up on email and updating the blog more regularly now. We will post the photos of the passage and our time here in Hiva-Oa to the gallery before we leave to visit the next island in the Marquesas on Friday.

PS; These are some stats for those who are interested. Our track shows we traveled 3,056 nautical miles through the water in 484 hrs averaging 6.3 knots. 822 nm of those miles were spent using the engine for 124 hours averaging 6.6 knots (speed over ground) and using .75 & 1.1 gals/hour at 1800 & 2000 rpm. We averaged 152nm/day and on our best day sailing we made 180 nm. At the time of our arrival, there were 10 other boats behind us. At the current time, there are still three boats that have not arrived and one is not expected till Friday.

Injuries and equipment failures for the passage. For Mark: a broken toe and 2nd degree rope burns on one hand from releasing the spinnaker sheet too quickly under load. (I should have worn my gloves). Nothing other than a tiny burn on a wrist from the galley stove for Janet. For At Last: a spinnaker halyard that almost chaffed trough but was lowered just in time before the spinnaker went into the ocean, some very concerning squeaks with the rudder post and steering gears that need attention, and of course the broken autopilot bolt that is still requiring us to tighten every eight hours of use. We are working with Dockside Electronics and Hellier Yacht Sales in Connecticut, USA to help us ship some parts to resolve the autopilot problems. For the rest of the fleet, equipment failures include a broken shroud, a broken forestay, broken jib foil, several blown spinnakers (at least 5, I believe), several broken spinnaker halyards resulting in spinnakers landing in the ocean, failed electronics and GPS units, autopilot problems, a cracked rudder post support bracket where the rudder passes thru the hull, blown fan belts, and more. I hope the World ARC fleet, who keeps a record of the equipment failures, publishes this information for the benefit of others who will do this trip someday.
More
Comments
Newer Older
Contents