Funny thing happened on the way to the airport… As we were getting ready for the sail over to Raiatea, Mark was on deck and began to hear someone yelling and waving to him from the beach. Mark yelled down to me, "I think we found Britt!" We had been looking for Brittany (s/v Zoe) for several days because her mother Heather was visiting and we heard they were flying to Bora Bora and not sailing on Zoe. We thought we would try to have them sail with us for the trip to Bora Bora. Unfortunately, after multiple attempts to contact Britt through Skype, Facebook, email, calling the hotel where they were staying we had not made contact.

Sure enough it was Britt and her mother on the beach and we took our dinghy ashore to say hello. They were on the way to the airport and just happened to see us in the anchorage. After a very brief discussion, Britt and Heather were on the way to the airport to cancel their flights and jump aboard At Last. After getting their flights refunded, they returned the rental car and were dropped off at the beach in front of where we were anchored. We picked them and their luggage up at the beach in our dinghy and brought them on board.

We stayed an extra night in Moorea to get Britt's mother, Heather, acclimated to the boat. She has never been on a sailboat before. We thought leaving for an overnight sail to Raiatea within hours of her getting on the boat might be a bit too much for a first time sailor. In Moorea the next day, we went snorkeling right off the boat in a nearby coral reef. The highlight of the snorkel was finding an octopus and a stone fish, which is a very poisonous fish. Britt and I would have liked that useful information before we had gotten so close. Fortunately, the fish wasn't bothered by our curiosity.

The sail to Raiatea was a bit rolly with waves hitting our beam for the entire trip. Everyone except for me took a good dose of Dramamine before we left on the trip. Despite not much dinner getting eaten due to some queasiness, no one got sick. In fact, Heather was very excited that she never felt one bit of sea sickness.

We spent the next two days exploring the islands of Raiatea and Tahaa. We had a fantastic time with Britt and Heather. I loved all of the help with the cooking and was grateful not to have to do the dishes while they were on board. It just seemed to be the perfect mix of relaxing and getting to know one another better. For a novice sailor, Heather did remarkably well negotiating the boat and dinghy. 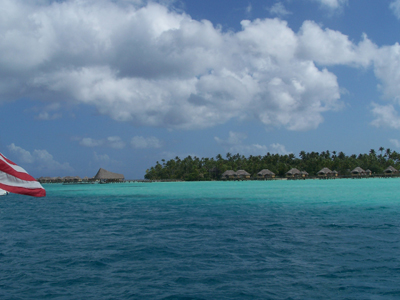 We did find an amazing anchorage off the Motu Tautau in Tahaa. (A motu is a reef islet formed by broken coral and sand surrounding an atoll). We struggled a bit with the pronunciation of the names of many of these islands. Tahaa became Tahahahahaha which seemed infinitely easier to pronounce and much more fun to say. While there we had an amazing view of a very exclusive resort where the over the water bungalows started at $1,500.00 a night. We imagined that we might run into Brad and Angelina or the Kardashians while anchored there.

One afternoon we went snorkeling between the motus and we saw so many different types of fish. The coral formed many caves and interesting structures so that you were always surprised by what you would see around the corner. On the way back to the boat we were in about four feet of water and I was on the bow of the dinghy making sure we didn't hit any coral. Suddenly, a reef shark that was about four feet long swam right in front of the dinghy. I could have reached out and touched it!

We have a quick three hour sail to Bora Bora and will arrive there on Sunday, May 13th. We will then have some activities with the fleet and leave French Polynesia. We will have quite a few four or five day sails over the next several weeks. We will be stopping at the islands of Suvarov and Nuie for less than 72 hours each before moving on. The entire fleet will regroup in Vava'u, Tonga the first week of June and then we will have a free sailing period while in Tonga until we reach Fuji and regroup there with the fleet for July 4th. More amazing places to see...
More
Comments
Newer Older
Contents