We sailed with s/v Juba on the way into Bora Bora and they were kind enough to give us this fantastic picture of At Last making its way into the passage. We didn't have much wind on the way from Tahaa but it was a beautiful day and a quiet sail to the last island we will visit in French Polynesia.

Sadly, we said goodbye to Britt and Heather the day after arriving in Bora Bora. We enjoyed their time on the boat thoroughly. We were able to join them for a lovely dinner out before Heather returned to California and Britt back to s/v Zoe.

We have had a busy several days in Bora Bora! As usual it's a mad dash to catch up with everyone here, attend the rally events, get some laundry done, re-provision, refuel and get the boat ready to leave for our next passage. Half of the fleet left Bora Bora on the 13th while the second half of the fleet will leave today the 16th. There isn't enough room for the whole fleet to anchor at Suvarov and Nuie (they are very small remote islands) so the fleet was split in half.

While here in Bora Bora, the fleet did participate in a dinghy race. The rules were that you could not use your motor and any attempt to sabotage other boats was highly encouraged. The course involved rowing around multiple boats in the anchorage. Mark dressed for the event in his bandana which has a good amount of hair attached to it. Many people asked him where his Harley Davidson was. He even won a prize for his "costume." We brought our boat hook to the race and in the pictures you can see me grabbing other boats in an attempt to get ahead of them. Below is a picture of the aftermath of the dinghy race where many people ended up in the water or soaking wet from buckets of water. 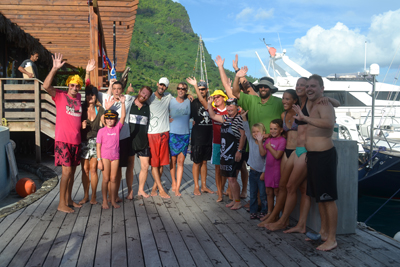 We wish we had more time to explore Bora Bora. It seems like there is so much to do and just not enough time. We did decide to stay an extra day in Bora Bora because our house closing was moved up to 5/17/12. We are still receiving emails today finalizing the sale of the condo. It will be quite nice to be able to leave Bora Bora with the house sold and that behind us. We also have a few extra things to do to get the boat ready. There are four other boats still in Bora Bora so we will surely have company on the way to Suvarov. Once there we will shorten our stay there to 48 hours in order to catch up with the rest of the boats. 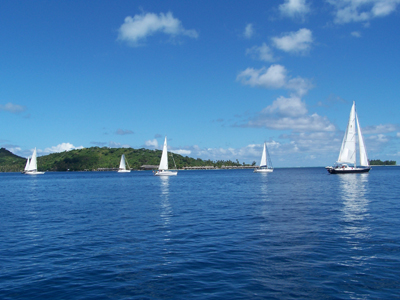 Here is a picture of the start of the leg to Suvarov by the boats that left today. It was quite a sight watching so many of the boats leave. We are off to refuel and fill our water tank. Then we will leave tomorrow afternoon. We are looking forward to doing some real sailing instead of island hopping!
More
Comments
Newer Older
Contents