We again extended our stay till Saturday morning and decided to skip Suwarrow (aka Suvarov) and head straight the Niue to catch up with the fleet. This gave more time to relax and prepare the boat for the trip but more important, it gave us time to make the pilgrimage to Bloody Mary's which is a "world famous" restaurant and bar here on Bora Bora. Though I never heard of it before, several celebrities have. Take a look at the pictures in the photo gallery.

One last note about Mai Kai Marina and Yacht Club (below). We highly recommend it. They have a great marina, great restaurant and great service all around. 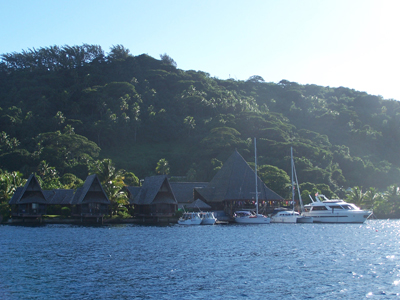 We are leaving Saturday around 6 pm eastern time and have a 1100 mile trip over the next 7-8 days and will try to update the blog along the way. Thanks for all the emails and comments on the blog. It is great to hear from everyone.
More
Comments
Newer Older
Contents