After the Baths took a slip at the Virgin Gorda Yacht Club in Spanish Town Virgin Gorda. We had to check out of BVI customs there adjacent to the marina.

Our last sunset in the BVI, from the Virgin Gorda Yacht Club through the rigging on At Last. 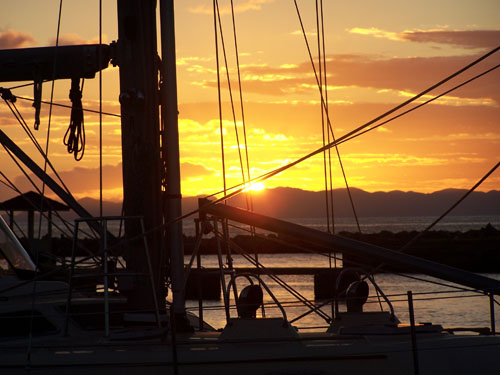 We left Virgin Gorda early at 7:00 am (yes I can get up that early). We were planning on leaving at 5:00 am but Mark let me sleep in. We had about an eleven hour sail to Anguilla. On the way out of the BVI, we passed Necker Island, owned by Sir Richard Branson, the UK airline and everything else mogul. You might recall that his house on the island burnt down a few weeks ago and that Kate Winslet saved Branson's mom from the fire. We have posted photos to the gallery of Mr. Branson's island, his many homes, his huge catamaran, the "Necker Belle", and the remains of the home that burnt down. Mark could not get any photos of Branson himself or Kate Winslet. Sorry about that but we are adding a link to the website about the fire.

Click here to read more about Sir Richard Branson's Necker Island get away, the house fire and Kate Winslet's rescue of Branson's mom

The sail was uneventful but we soon realized that we would not be making it to Anguilla until dark. That meant we would have to anchor in the dark. Not ideal but we had good information on the anchorage and the electronics on our boat has radar which shows up where the other boats are. As soon as we got there we realized there were three huge (over 200 feet) boats in the channel without any lights on (you are usually forbidden from anchoring in a channel, especially unlit). We found a spot to anchor and used hand held walkie talkies to communicate. I was at the helm (driving) while Mark was at the bow (front) of the boat dropping the anchor. When we woke up, we were happy to see that our anchor had not dragged and we were within safe distance of all of the boats around us. We both agreed that leaving at 5:00 am would have been a bit more advantageous.

Along the trip, we have had a few visitors drop in from time to time. A few days ago a few wrens took a breather on our boat while we were sailing to Anegada. Here a larger cousin takes a break on our bow pulpit just before we leave Anguilla. 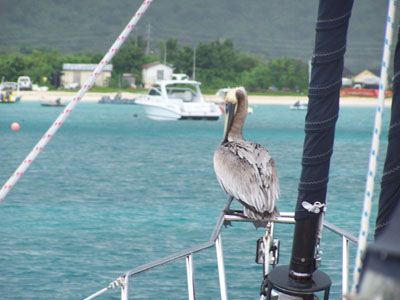 What Day Is It Today? Mark and I awoke to a lively discussion about what day it was today. He was convinced it was Friday while I kept insisting it was Thursday. It is amazing that without internet access or television how easy it is to forget the days. I finally showed Mark a date book I have been keeping to record where we were and what we did every day. He still wasn't convinced given if I skipped one day the whole thing would be messed up. I then produced a receipt of when we got gas in Virgin Gorda which gave us the reference point we needed to figure it out. I guess this is what they mean by living on "Island Time". As long as it is not a senior moment for Janet.

We went to the Baths today on Virgin Gorda. I was insisting we go because I find the whole affair lots of fun. First you pick up a mooring ball along the beach. Then you swim from your boat onto the beach. You are not allowed to bring your dinghy onto the beach. After the swim you enter a very interesting formation of giant granite boulders. The sea washes in between the large rocks and forms pools. You have to crawl, climb ladders and shimmy up rocks using ropes to get through the formation to another beach. Then you go back through the boulders and swim back to the boat. The picture is taken from our boat looking at the beach - yes it's quite a swim.
More
Comments One of Anegada's treasures besides the lobster is Pam's Bakery. We went in search of it yesterday and found it again. The same woman, Pam, has been running it since 1977. She moved to Anegada at that time after falling in love and marrying a man from the island. She makes all sorts of breads, pastries, and pies. Mark took the dinghy in to see her this morning at 8:00 am and brought me back a warm cinnamon roll, right out of the oven, which you can see me enjoying with my morning diet coke. What a way to start the day.

Pam's Bakery located on the beach in Anegada 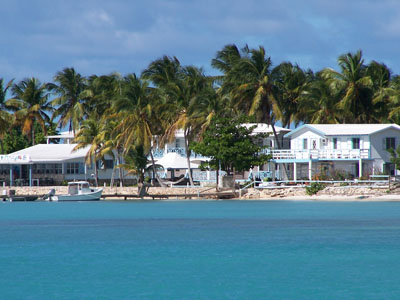 After breakfast we left for Loblolly Bay on the other side of the island. The beach is known for the restaurant, The Big Bamboo, and excellent snorkeling. We had quite a work out with the snorkeling (big waves and current) then we went for a long walk on the beach. Sadly, we found many things washed ashore as we got further down to the more deserted end of the beach like liquor bottles, shoes, and an old boat refrigerator (not kidding). We had a better understanding of why several men were cleaning up the main part of the beach when we got there.

At Last in the only anchorage in Anegada. 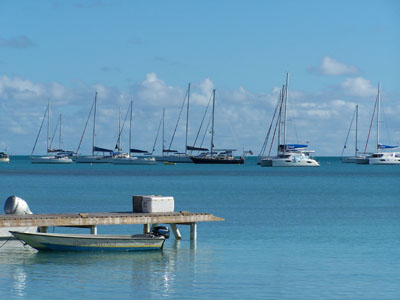 The Best Lobster I Ever Had We finally made it to Anegada. Mark and I were here eleven years ago and finally made it back. It is one of our favorite islands. It is a couple hour sail from the eastern most island in the BVI and it is surrounded by coral. You also cannot see the island from the other islands (its highest point is only 28 feet above sea level) so many people do not venture out to it. It is only 11 miles long and much of it is uninhabited. Mark wanted to return so he could have another spiny lobster which he believe is the best lobster he has ever had. 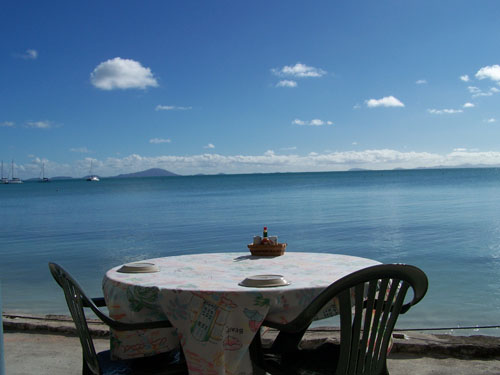 We ate at the Lobster Trap for dinner after discussing with the chef his ability to serve a better lobster than at The Big Bamboo where we ate 11 years ago. He was quite confident that his grilled lobster was immensely better. We made reservations and went for dinner. I think he gave us the best lobsters he had which were HUGE. They were split lengthwise and grilled to perfection. We were stuffed. And yes, I ate a lobster which for those who know me would find quite unusual. I am not a big fan of seafood. I can safely say it was the best lobster I ever had.

This is the Lobster Trap Restaurant. 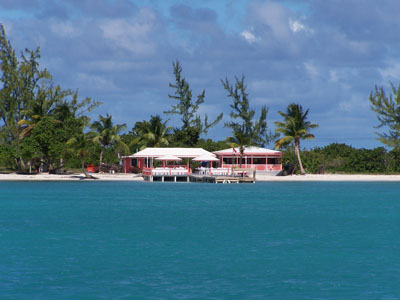 I Know It Is Here Somewhere We didn't make it to Anegada because we couldn't get ourselves moving this morning. We were puttering around on the boat and suddenly it was really too late to leave for Anegada. The island is surrounded by coral reef and getting there is tricky so we wanted to make sure we could get there in good sunlight. We shall try again some other day. Nothing went well today because our next choice was Musk Melon Bay on Guana Island. When we got there the ocean swells were too great for us to anchor there for the night. Then we went to the Baths in Virgin Gorda hoping to swim but the beach had a red flag up indicating the swells were too great for swimming. So, we ended up at the Bitter End in Virgin Gorda. Luckily, all of these islands are close together. 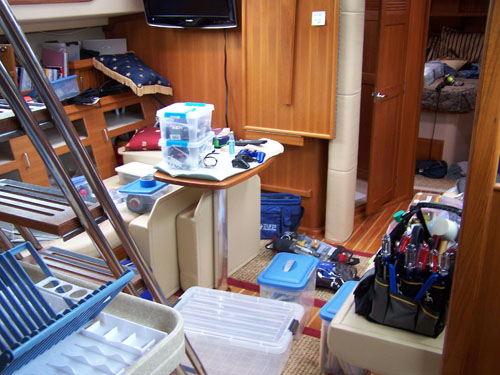 Anyone who knows us well will be shocked to see this picture of the interior of the boat. We decided to go through everything and try to reorganize. The trick is to get the things you need in the most accessible place and get the things you don't need out of the way. For those of you who are not familiar with storage on a boat, most of the compartments for storage are under beds, sofas and floor boards. They are typically deep or long with a small opening. The stuff you put in first may never be seen again. The stuff you put in last is invariably what you don't want to see again. I would estimate that we have about thirty of these types of storage compartments. Mark has been debating making a spreadsheet on where everything is stored which, I kid you not, many people do.

By the way, we added photos of the Bitter End, Virgin Gorda to the gallery.
More
Comments
Newer Older
Contents