Can it get any better than this? We had a fantastic sail to the Tuamotu Islands with lots of wind. We were together with s/v Zoe and s/v Southern Cross the entire way so we chatted with them on the SSB radio once or twice per day. We were planning on going to the island Manihi first but were unable to reach the island before sunset so we kept sailing on to Rangiroa. These islands are the largest group of coral atolls in the world. Each island is a band of land with a lagoon in the middle. Typically, each has a channel which you enter through to reach the lagoon. The channels can carry large amounts of current going in and out. You should only enter the islands during the day due to the incredible amount of coral reefs you need to avoid. When we entered Rangiroa we had about 5 knots of current going through the channel. The lagoon is large enough (78 km long and 24 km wide) that the entire island of Tahiti would fit inside its reef. We anchored in front of the Kiaora Resort which had hotel rooms (huts) right over the water for only $1,000 per night. The view was spectacular and the Resort offered some of the most beautiful sunsets we had ever seen. Happy hour became a must even if a pina colada was $13.00, yes, French Polynesia is very expensive. 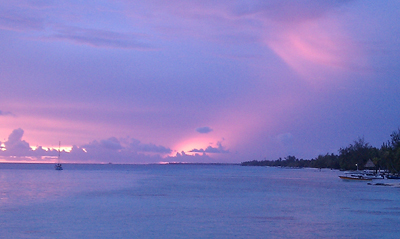 The next day in Rangiroa, we went snorkeling at 8:00 am with our friends on s/v Zoe. We got there early so the tide was slack and we wouldn't drift away. The snorkeling area was nick named the "Aquarium" and it lived up to its name. As soon as we tied our dinghies to the mooring balls there were hundreds of fish around our boat. We dropped in the water and the fish weren't very bothered by our presence but instead seemed quite curious. They would come right up to you and some would even give you a nibble. We saw huge moray eels on this trip which usually stay in their caves but instead would swim right below us. The eels were about five feet long and seemed to be 8 -10 inches around. They weren't very attractive but were quite a site. I felt as if we were in the water in the movie "Finding Nemo" where all of the fish were bright colors and beautiful. There had to be dozens upon dozens of different varieties of fish. And yes, we again were swimming with sharks. They are black tip sharks and are reportedly harmless. Mark had one come up to him within a few feet and harmless or not, he has had enough of shark watching. The coral was also magnificent with so many oysters you couldn't count them.

And then, we went into town to see the sites. Most of the towns in the Tuamotu Islands consist of one concrete main street with a church, couple of small grocery stores, a building selling local crafts and a couple of very small restaurants. We weren't planning on going into town so we had little money and not everyone had shoes. We figured we could afford a beer for each of us and a couple of bags of chips so that became our 11:30 am lunch. We sat at the picnic table outside the grocery store and several local men on their lunch break joined us. One gentleman spoke a little English and the rest of us practiced our French. We have been finding everyone in French Polynesia to be very friendly. We enjoyed their company greatly.

That evening the WARC boats in the lagoon were invited over to Zoe for a movie. They had a projector and let out their main sail. They projected the movie "Master and Commander" onto the sail for an 8:00 pm show time. Five dinghies arrived with beer and popcorn. Zoe handed out fresh baked brownies. All of us sat in our dinghies tied to Zoe and watched the movie. What an incredible experience! We have to do this at home with the Cruising Club of New England!!

While we were in Rangiroa, we also visited one of the Pearl Farms. We received quite an education about how they cultivate and harvest the pearls which is quite a scientific process. The farm we visited produced 1/12 of the pearls in French Polynesia. They produced approximately 300,000 pearls per year but only one to two percent of them were of the highest quality. Pearl farms are quite regulated so they are only allowed to use oyster shells that they catch in a special netting. Once the oyster shells are caught they take three years to become ready to make a pearl. In order to make the pearl, the shell is implanted with a round piece of mother of pearl which is made from another oyster's shell from Mississippi. Attached to this round ball is what is called a host. The host is a piece of another oyster which will actually grow around the mother of pearl ball to make the full pearl. This host gives the pearl its color. It takes two years for the pearl to be made. Once the pearl is fully grown, it is removed from the oyster by prying the oyster open by a couple of centimeters. They cannot be opened more than this amount otherwise the shell will crack. Once the pearl is removed, another mother of pearl ball is placed in the oyster but no new host is needed. The new pearl ball is a larger size ball which the oyster can now accommodate. The total number of times that an oyster can produce a pearl is three times. The final time would produce the largest size pearl. We were able to see the dozen technicians at work adding the balls and hosts to the oysters at a rate of 450 oysters per person per day. It was quite fascinating! Then of course we were allowed to shop in their store. I didn't feel the need to buy any Tahitian pearls because they were quite expensive. I did see a necklace I liked and Simone on s/v Serendipity encouraged me to find out how much it cost. I am usually very adept at picking out the most expensive jewelry in the store. The woman handed me the necklace and showed me the price. It wasn't too bad but still too expensive. Then she pointed to a sign which was in French indicating that all of the necklaces in the case were half off. She got out the calculator and punched in some numbers to give me the cost of the necklace in dollars. Suddenly, the necklace was an irresistible deal of the century.

A Pearl Being Harvested from the Oyster 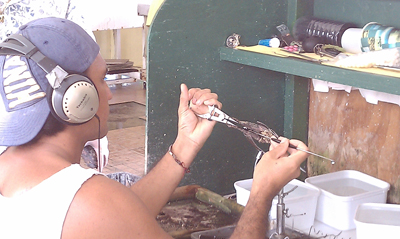 Before we left the Pearl Farm we were given the edible part of one of the oysters which had produced its last pearl. Yes, I had a piece and was more enthusiastic than Mark about trying it. While in Rangiroa, we went to a barbeque at the Kiaora Resort with Magali and David (s/v Ensemble) and I had eaten several oysters which were quite good. The food at the barbeque was very French so we tried all sorts of new things like blood sausage and pig intestine. Since we have been in countries where English is not the primary language for the past several months, we have become accustomed to interpreting menus which are in another language. It's not uncommon for Mark to turn to me after ordering and ask me if I know what I ordered. My typical response is that I am not exactly sure but I am sure that I will like it. It does make for some interesting eating!

Sadly, we left Rangiroa on April 19th for the day and a half sail to Tahiti. We have made arrangements to have our boat hauled out to get the bottom painted. We also have some repair work to be done at the shipyard. Even more sadly, much of our time in Tahiti will be doing work on the boat. We have heard from many people that while circumnavigating you just get to do boat work with a better view.
More
Comments
Older
Contents