What do Pirates, Stromatolites, Gumbo Limbo Trees and West Winds have in common?

There is a pristine beauty and an immense land of ruggedness to be found at the Exuma Cays Land and Sea Park (Bahamas), which is where we've been lallygagging for the last little while.

It truly is an incredible place to be, with the only negative being the lack of connectivity to Cell Service. There's one cell tower at Highborne Cay with the next one being approx 20 nm away at Staniel Cay, which in data miles, is way too much. And in the middle, at Warderick Wells if one is hiking atop BooBoo Hill, or just by the Ranger Station if you hold your hand just right, up and sideways, weirdly so, one can hear the ding of an incoming message. However it's just a False ding, with the hopes of getting news being quickly dashed as the No Service appears on screen and you're left wondering at what you've been missing for all the days you've been here enjoying not being connected to the collective.

At the Headquarters of Warderick Wells there are three mooring ball fields; the North field boasts a horseshoe shaped area and is the centre of activity and the most sought after (just remember to stay in the deeper darker waters when coming in!) There's Emerald Rock which is perfect in the right conditions, and allows for anchoring outside of the mooring ball field, but is totally exposed to the West so given the incoming West wind weather this was a No No. And then there's the South Field (aka Hog Cay) which no one ever asks about, or talks about, or perhaps even knows about! Maybe it's all a bit of a tall Pirate Tale?

When we received a negative on our call request for an available mooring ball in the North Field, we asked about the lesser known hidey hole that is the South Field.

We'd never been, and were a little excited as always, to go somewhere new to us. Given the predicted forecast of a few days of clocking winds but especiall South and West (squally) winds, we were seeking all around shelter and on the charts it looked like a perfect hidey hole, but we still had no idea what to expect, and just how protected it all would be. For real.

The five mooring balls there were certainly hidden from view, and we ooh'ed and aah'ed as we motored our way in, thankful the calm waters that day made for an easy approach and we could spend our time ooh'ing and aah'ing some more until the rapidly approaching mooring ball number five had us back to action stations, tying up and getting settled. 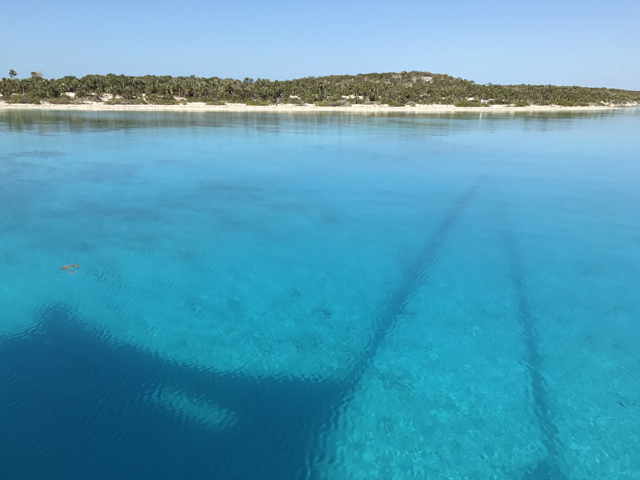 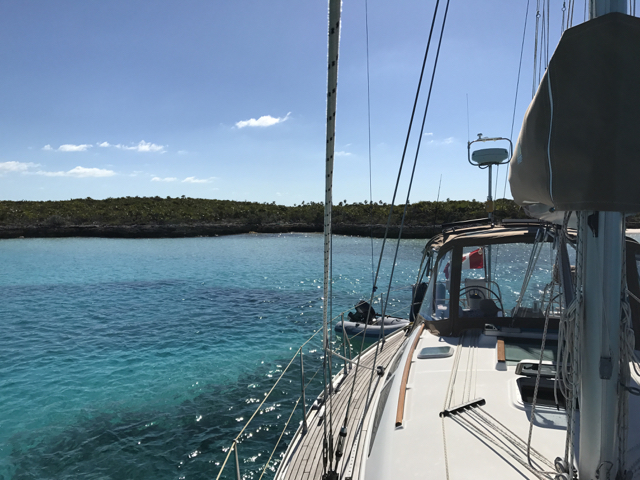 The waters were flat calm and we certainly were impressed by the seclusion of this place. We snorkelled and swam, pointed out the giant rays and turtles going by, snorkelled some more and just breathed in total relaxation knowing we were safe and sound from the forecasted incoming winds. This was certainly not the hub of activity that was the North Field. This was total private relaxation. Five boats and then no more traffic. In the evenings there was not one iota of light pollution and the night sky twinkled alive over our heads and below, the jelly fish held us captive as they bioluminescened their way past us.

There is no anchoring to be had here and a large white buoy bobs up and down in the current, indicating just that. Largely because this area is (one of the) protected homes of Stromatolites. A rare form of life present from the beginnings of this planet we call Earth. We've seen a few in our travels and can only best describe them as layered, almost mossy type, rock formations, which are actually living photosynthesizing microorganisms. I guess.

As we hiked we noticed the trails were plenty damaged form the Hurricane with the ribbons on some of the downed trees indicating no direction in particular. The dried palms strewn about the ground making our steps slightly slippery, the rustling of the curly tailed lizards scurrying away from underfoot, and we continued On On, dodging and certainly not touching, the poisonwood trees.

The poisonwood tree (somewhat similar to the Caribbean Manchineel trees) grows everywhere here, and its sap (containing urushiol) is NOT to be touched. The branches of 3 or 5 or 7 leaves are easily discernible and double so if you notice the smooth bark with splotch and blotchy grey and beige and black spots.

We've read that the antidote to the poison ivy type of painful blistery rash is the sap from the Gumbo Limbo tree (otherwise known as the Tourist Tree), however, no one we've talked to has heard of this, so we're not sure to this day if this is just another tall Pirate's Tale.

As if this isn't enough, hiking on the perilous iron shore is not for the faint of heart. 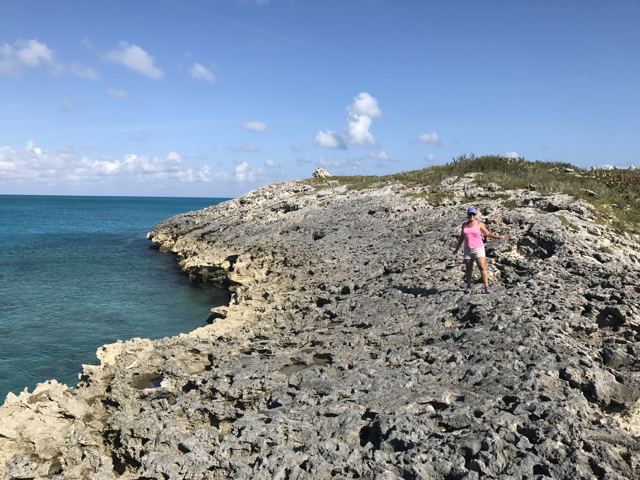 Our eyes were constantly downcast searching for reliable footing, 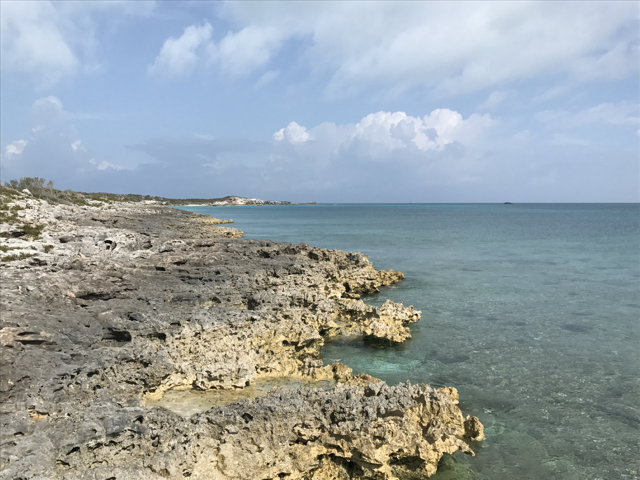 on the disproportionate jagged edges and pinnacles of points of what appears to look like black, grey or beige volcanic rock. More precisely elevated fossil coral reefs, probably millions of years old. Not volcanic by any means, it is actually limestone terrain. And the reason for this type of pock marked moon rock look? Limestone dissolves when exposed to fresh water so think of rainwater as acid as it gently falls or solidly downpours on the limestone ground. 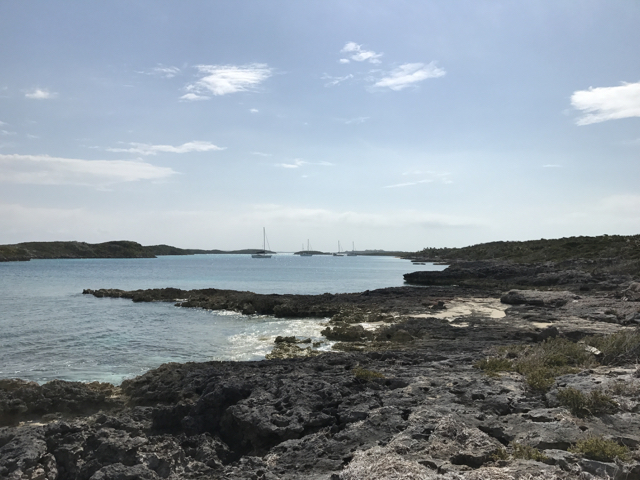 Always and especially watchful of the giant sinkholes, or blowholes, or just holes leading to certain injury if misstepped into. 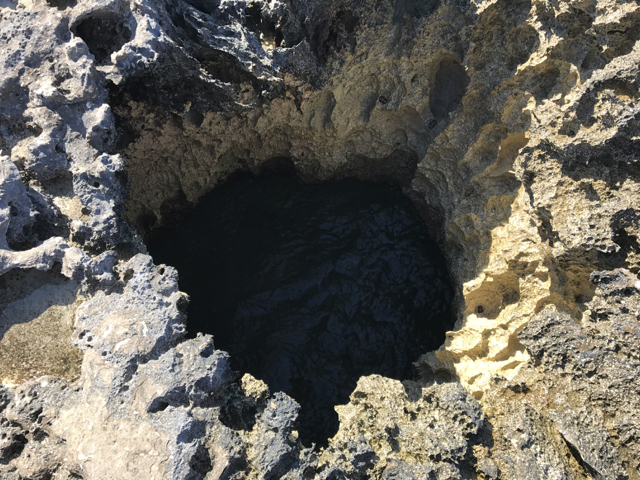 Our thighs and calves getting quite the workout as time progressed and we clambered upwards, and then stepped downwards, sort of like hours spent on an uneven stairmaster at your local gym, but Oh, the views, they would not be broadcast on any T.V.'s in air conditioned gym rooms anywhere. 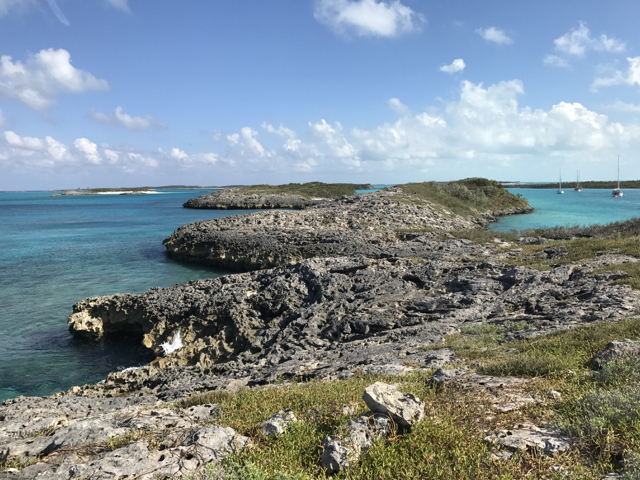 It wouldn't be a perfect hidey hole if there weren't Pirates to be had, and sure enough, it didn't take us long to find the actual Pirates Lair. The sign reads as follows: 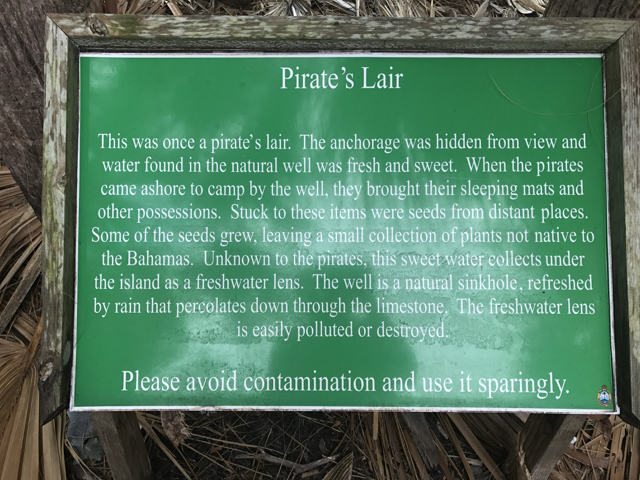 and I can honestly tell you that for the ten seconds I stood there to have my photo captioned, 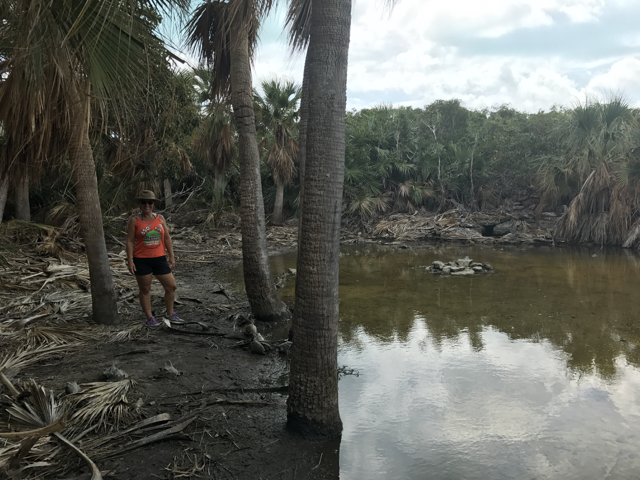 I got covered in mosquitos. I sure wasn't going to start digging for treasure in the slimy brown freshwater pool and I ran outta there some fast screaming "where's the rum" as if it were the perfect antidote to the mossie itches that were quickly developing.

The next few days had us exploring and hiking and swimming and snorkelling, all in the excellent protection that is the Hog Cay hidey hole, talking about days gone by while the West Winds blow.

So what do Pirates, Stromatolites, Gumbo Limbo Trees and West Winds have in common? 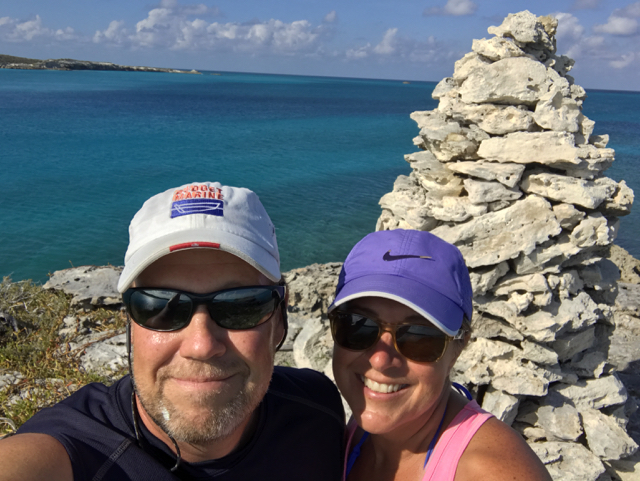