An Invitation to Distant Shores Have you heard of Distant Shores?

Dave and I used to watch their TV show many many moons ago, when we still had a TV and access to Cable. Back when we were still *thinking* about making this dream we had a reality. Of exploring the world with a boat that we would call home. We watched their informative, well filmed & well researched shows with captive interest, drooling at the distant shores they were visiting, captivated by it all. Inspired by them.

We watched & we learned and we dreamt how we would be so lucky as to one day be doing just like them.

When Dave retired, I kept on working. Traffic being what it was I knew that if I left at ten minutes to the hour, I would make it to work well ahead of 7:30 start time avoiding any frustrating lengthy pileups, and able to enjoy my coffee before the start of the work day. But if I left ten minutes after the hour, the roads would have me delayed, stuck behind too many cars at too many red lights.

You know what happened right? Their episodes aired at 7 a.m., just as I would be primping the last double check of my dress in the mirror behind the door.

"Look at this place... " or "Oh Wow Dear, watch how..." Dave would say as he handed me my coffee. Invariably I would stop. And inevitably I would sit down, and finish my coffee as I watched the show which would make me stuck in traffic. Not to mention late for work.

We met Paul & Sheryl in the British Virgin Islands on the 10th of April 2013. You can read all about it HERE

We were thrilled to appear in their newsletter And excited to celebrate the Sint Maarten Carnival with them. 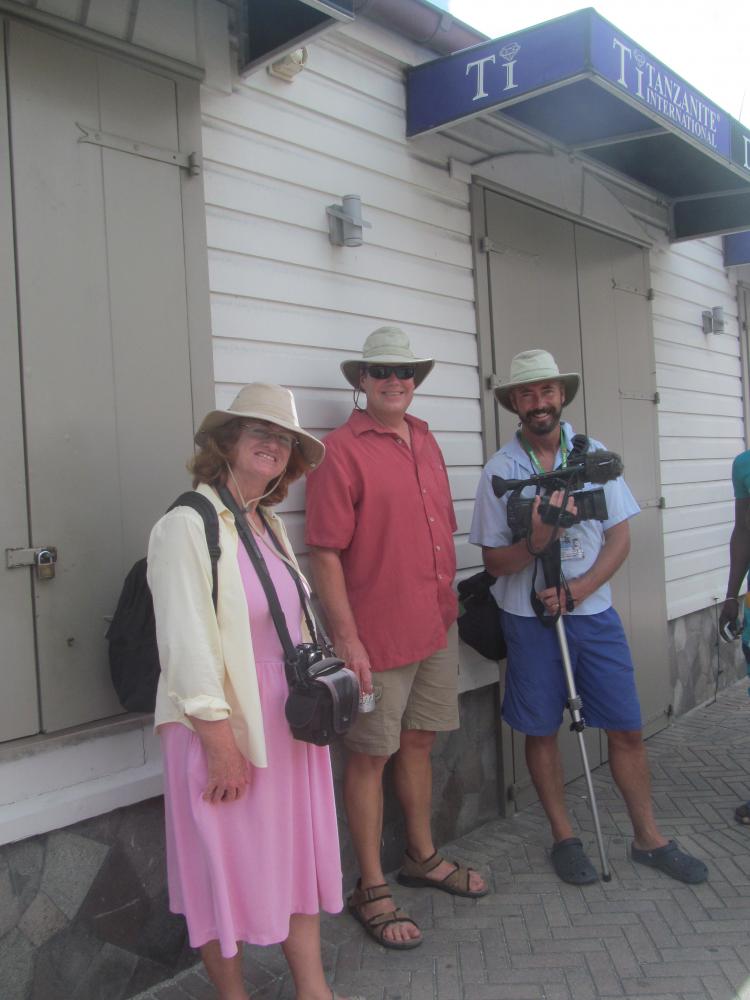 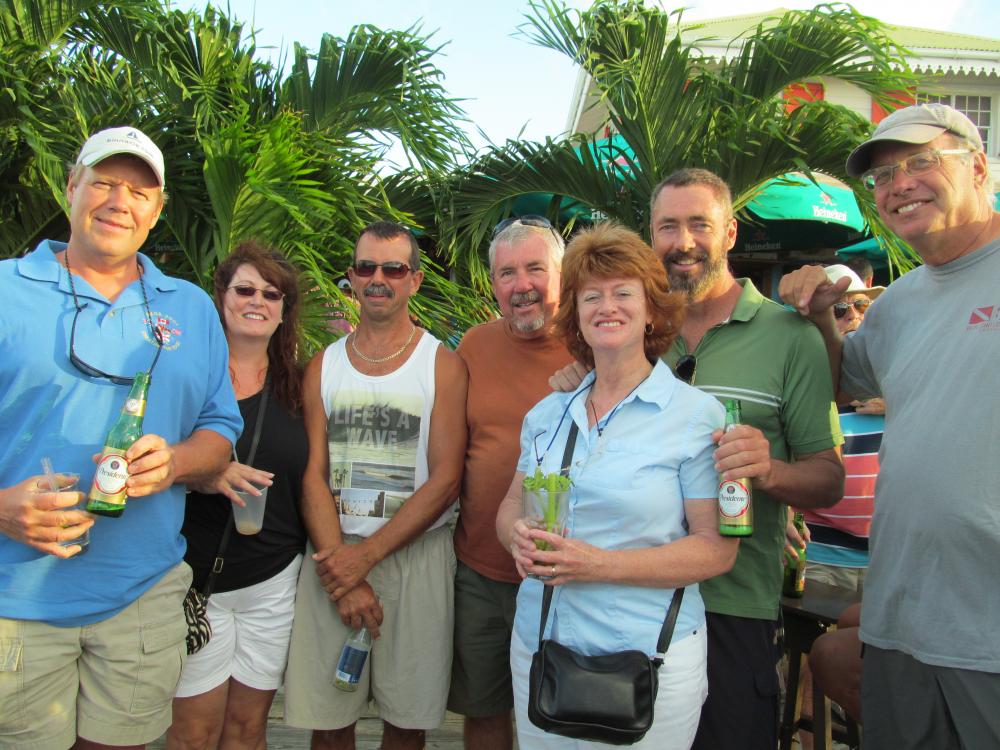 where I obviously didn't get the memo to wear blue!

We celebrated Paul's Birthday with Cake delivered by Deliverance at Peter Island and then hiked all those calories away. We muled them some boat parts when we found out we would be in the same place at the same time. We've met in quiet idyllic anchorages and chaotic busy places, like the Annapolis Boat Show last year. 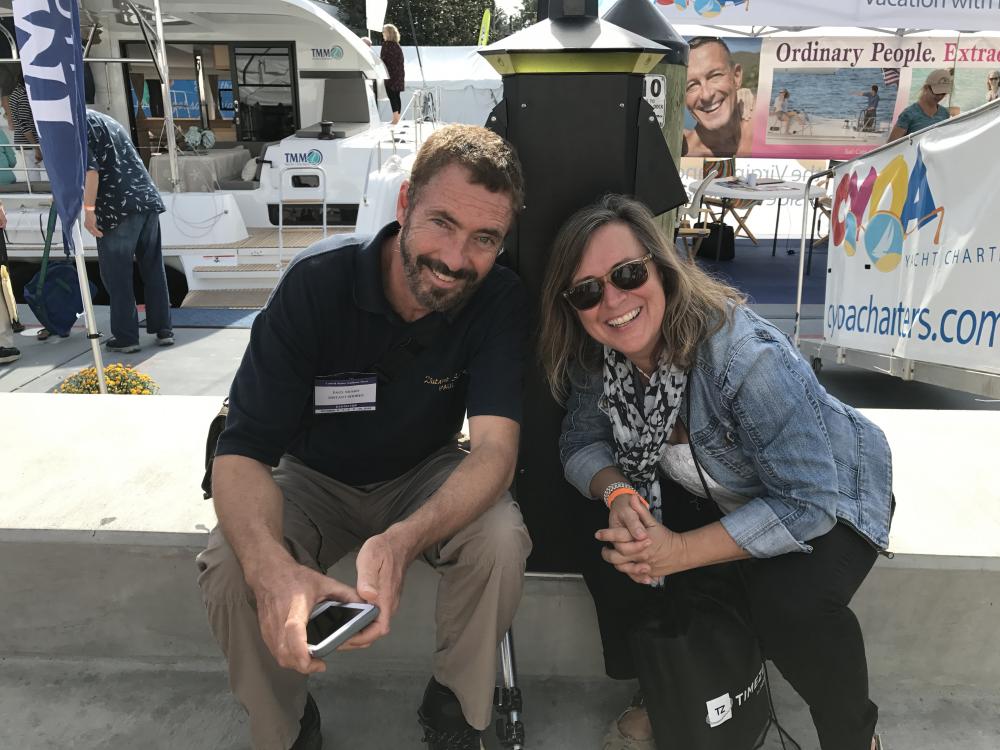 We share a love of travel and sailing, cooking and chatting and Sunday dinners. And we were thrilled when they invited us and our new RV to their beautiful house on the Lake last year. 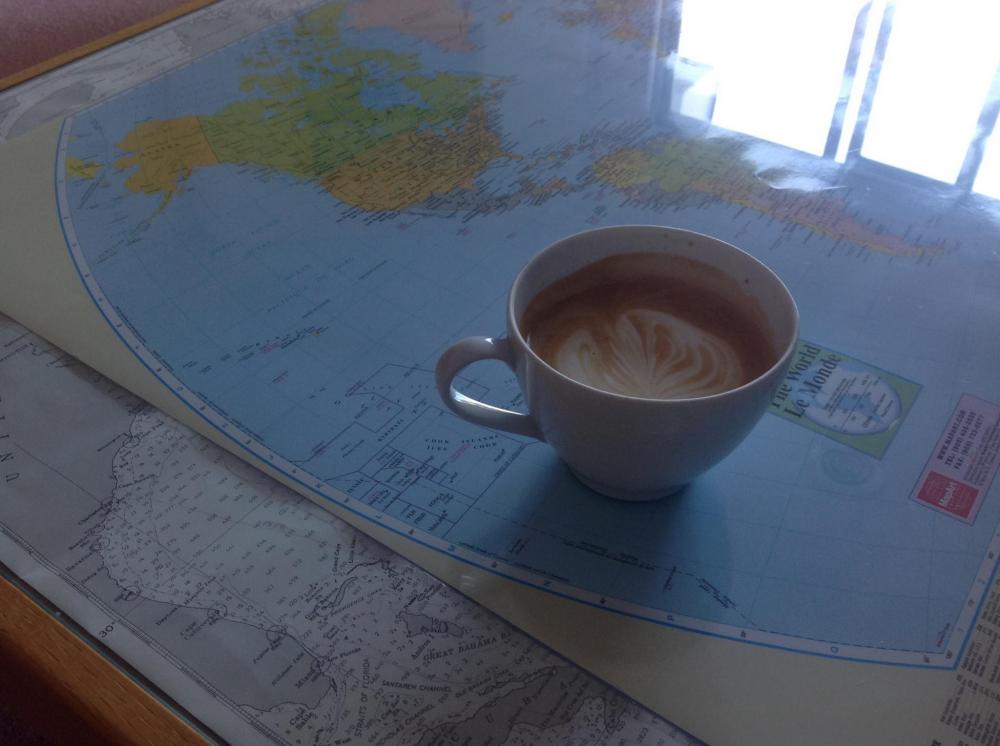 We've truly enjoyed building our friendship across the many distant shores where we've enjoyed reunions with them on.

A couple of months ago we were just going about our business as usual. The day being what it was, we got to bed a little too late, and checked our inbox well after midnight, *just cause*. And almost weren't going to read the email with their name on it. Because we thought it was *just* their newsletter and would be better enjoyed over coffee the next morning. But for whatever reasons we do what we do, the Capt'N clicked it open, and started reading.

He gasped. And then he gasped a second time, a little louder and for effect as he nudged me out of my Sleepy Candy Crush game.

And then we both lay in bed, eyes wide open, fully awake and hearts thumping, all night long.

The Email was an invitation. Asking us if we wanted to help them deliver a Discovery/BlueWater Catamaran from the Canary Islands to Saint Lucia. A transatlantic passage on a luxurious 50 foot Catamaran.

The Capt'N was totally IN. He's crossed the Atlantic, but I figure that crossing a big blue ocean several times on a few military-grey coloured, 400+ foot Naval Destroyers, doesn't really count, does it? As many of you might know, I had no immmediate desire to cross an ocean on my boat that is my home, preferring instead to spend the last four seasons exploring the length and width and breadth of the Caribbean Islands.

Perhaps some time in the future? What's the rush? Right?

Because I *knew* that this would be one of those life events that I would regret if I didn't do! So we emailed our Paul & Sheryl with the reply: Aye, Aye. Count us IN.

Which is totally what changed our plans as we were RV'ing across Canada, heading towards Winkler and the LTV Rally, the only fixed event on our schedule. Which is how we ended up storing the MoHo in Las Vegas and flying home to Halifax for the Capt'N's routine medical appt, somehow perfectly and fortuitously timed to fit in with the start of this Epic Adventure.

The flights were getting more expensive as each day passed. And we waited for confirmation of the boats shakedown cruise where all went well. And then one evening, out of excitement and boredom, the Capt'N Googled then Googled some more. And found a flight from Halifax to Ireland for barely $200 each. And once in Europe, flights are a pittance, so after a few days in Dublin, we booked a flight to London. And then another one to Barcelona. Which is our Wee Adventure before the Epic Adventure. A week's worth of Adventuring for what would've been the total cost of a flight for two direct to the Canaries. Well done Google & the Capt'n for all that keyboard research.

And then we join Paul and Sheryl in the Canaries. And we meet the other two crew-mates, Dan and Craig of CruisingOffDuty.

We shall learn the boat, practice sailing her, provision her and then hoist the sails. For Saint Lucia. And that's THE Epic adventure.

Talk about some serious distant-shore-ing, eh?

Thank you Paul & Sheryl for The Invite. Thank you Distant Shores for the Continuous Inspiration.
More
Comments
Newer Older
Contents