It was a quick stop for us while in Georgetown. Mostly we spent our time anchored in a new to us spot: Goat Cay South, while the West Winds blew during the passing of yet another cold front.

During which time we were able to run ashore for provisions. We needed to stock up a wee bit for our travels and passages, unsure of exactly what to expect and where as we journeyed South and West.

I still shake my head as I look at the food receipts and shudder at the cost. 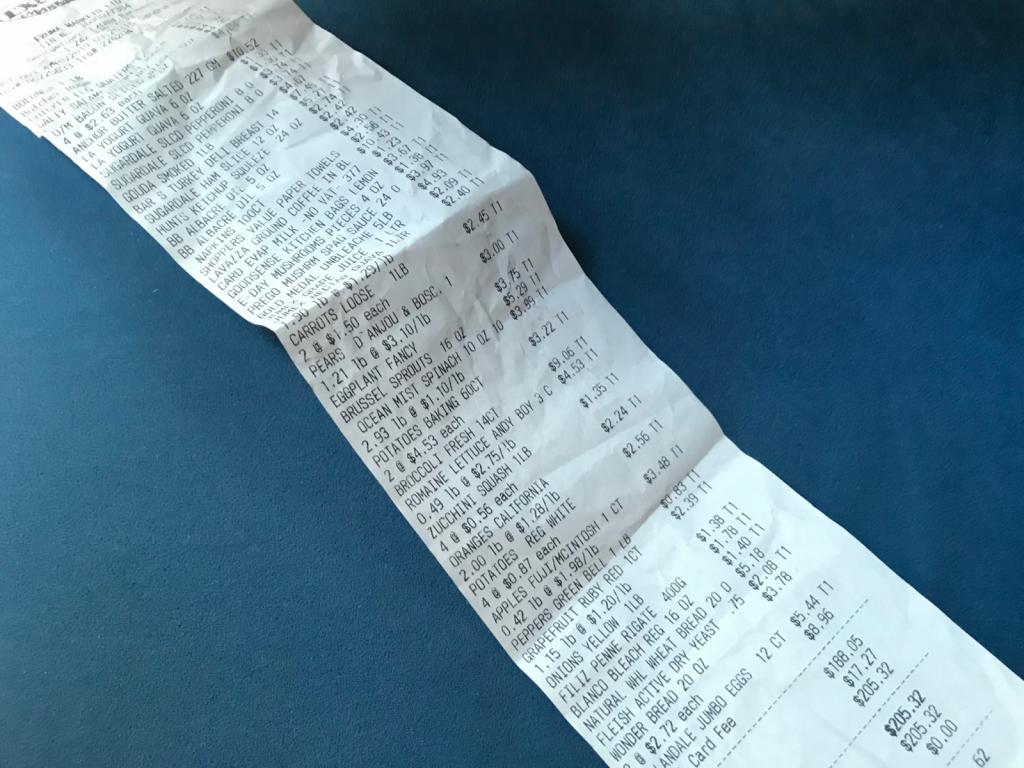 Some basics {{ flour, sugar, yeast, and only one roll of paper towel, because? $5 }}, some chicken {{ wait, where's the beef?? }}, two heads of brocolli {{ ten dollars? Because Fresh !! }} This is the cost for anchoring for free in the sun, sand and secluded beaches that are the Exumas, Bahamas, right? {{ Convert that to Canadian dollars, eh? }}

A top of up of propane, which should last us an extra five weeks, six if we monitored our consumptions of fresh bread, cookies and empanadas. Refuelling by jerry jug, tuning of the rigging, checking of all systems was happening on the outside. 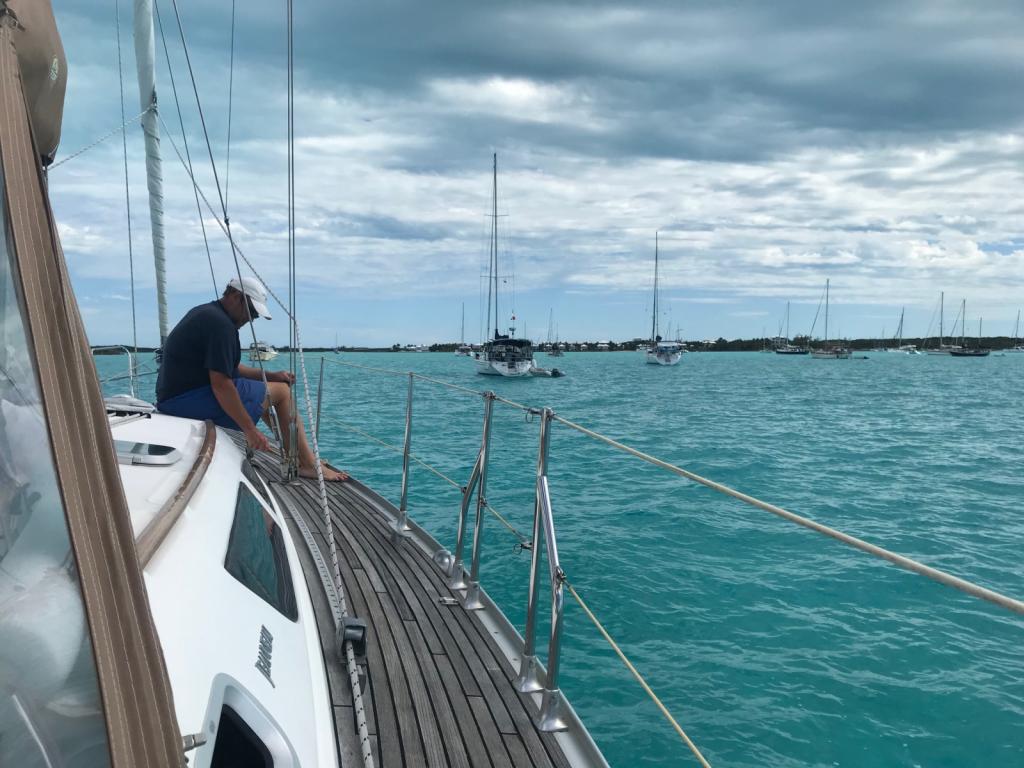 And on the inside, some re-organizing of cabin spaces and storage of movable objects and things you need to do before you Travel and Passage. Like think about moving the ditch bag to a more accessible location, but as with complacency in the protection that is calm waters, soon becomes a forgotten task.

Anticipating being at sea for days on end, and living onboard are two different ways of passaging and travelling.

Just minutes away from the chaotic jumble of boats that is town, is Elizabeth Island, 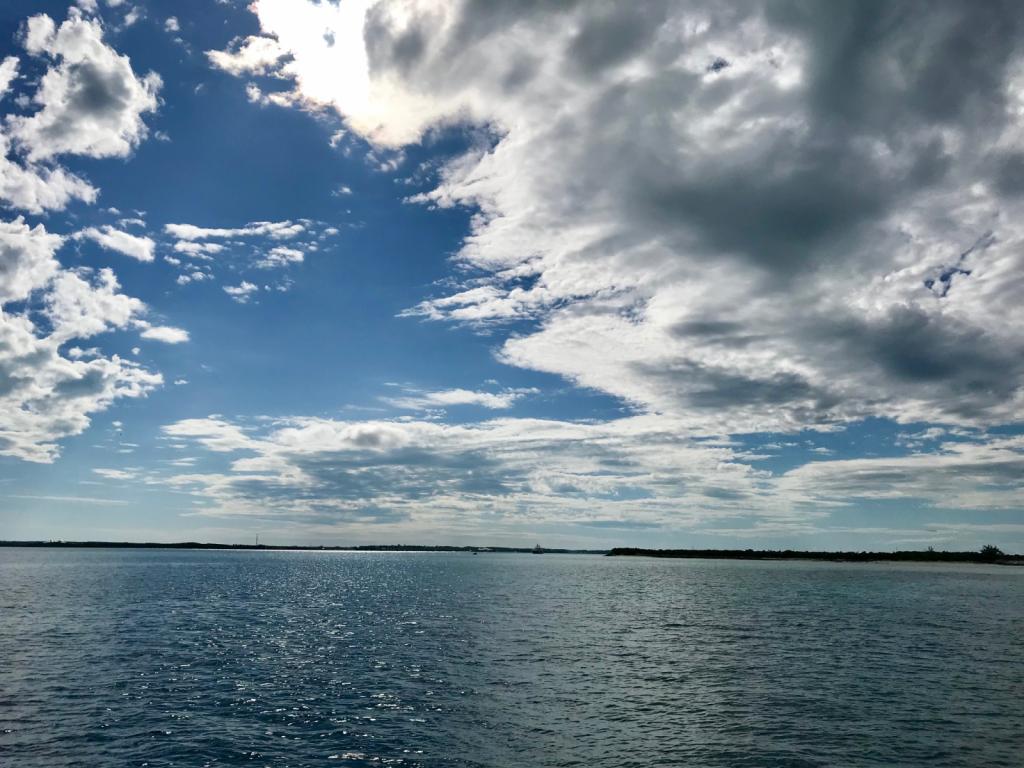 which is where we anchored for the evening. We were missing out on a beach reunion with Friends we don't get to see very often. But we knew we had some chores ahead of us. Prep our dinghy and our boat for travels. A lovely meal that lulled is to an early sleep as we tried to recharge our bodies with a few extra winks of sleep before sunrise. All things that wouldn't happen if we had taken the sunset get together on the beach. Prudence and logic prevail, but another reunion we will regret missing, I'm sure.

Two days later and here we are in Clarencetown, on the South East side of Long Island. 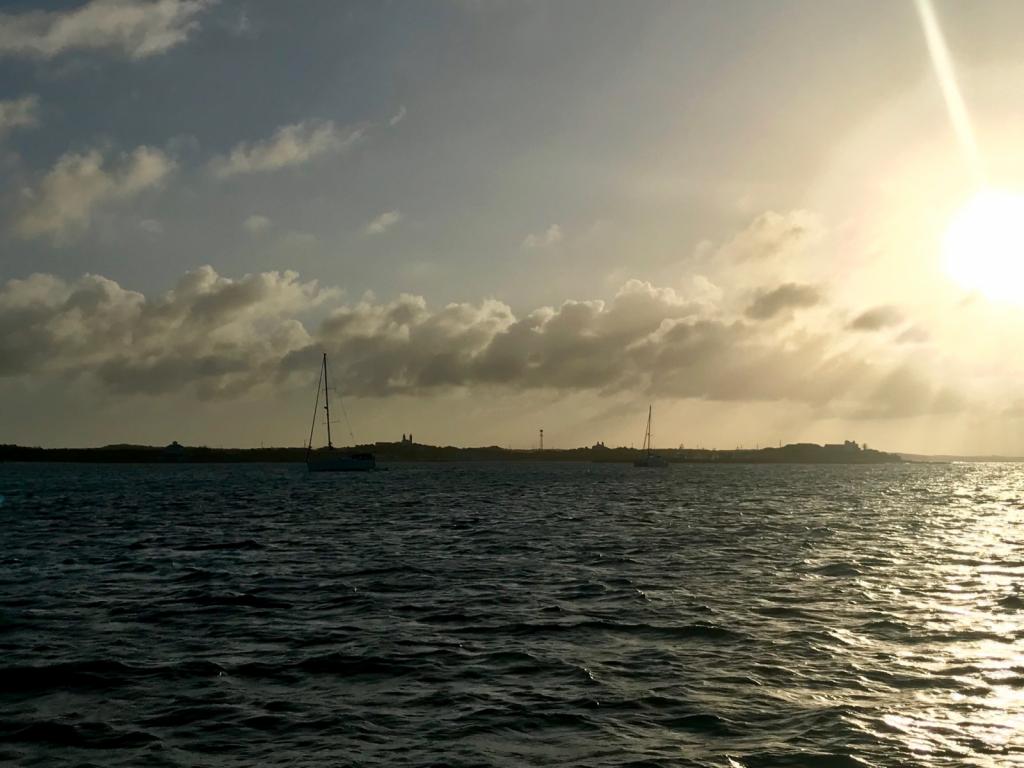 The church steeples built by Father Jerome visible with our naked eye as we sit on our very salty boat, our bodies exhausted, our minds relieved to be here. In the shelter of our sunny cockpit all we hear is the howling of the SE winds and the resulting surf pounding the reef in front of us. The open hatches allowing the boat to breathe after a full day of salty sailing. The sailbag shuddering in the wind and all lines pulled extra tight so as to prevent mast slapping.

The last two days of passaging and travelling have been a reminder of what it means to... passage and travel.

The first day's trip from Georgetown to Conception Island was quite lovely. In rather idyllic conditions if a little too slow type of lovely, with blue skies, blue waters and gentle breezes. We were sailing. Ever so slowly, but we were sailing. The type of slow that had the winds not quite where they needed to be in strength {{ meaning, less not more!! }}, nor in the direction as forecasted {{ traveling around the top of Long Island can be a little uncertain }}, and the current against us {{ sigh, of course }}.

So our early afternoon arrival got pushed back by one hour, and then two... as we had to tack one hour one way and then another hour and a half the other way, just to make the entrance into our anchorage. Patience, my young Padewan, says the successful sailor. Oh, but can't you just taste that icy cold Arrival Beer, like now?

However, our thirst was soon quenched as Arrival Beers were perfectly timed an hour before sunset, and probably a good three hours after we had anticipated and hoping to arrive. 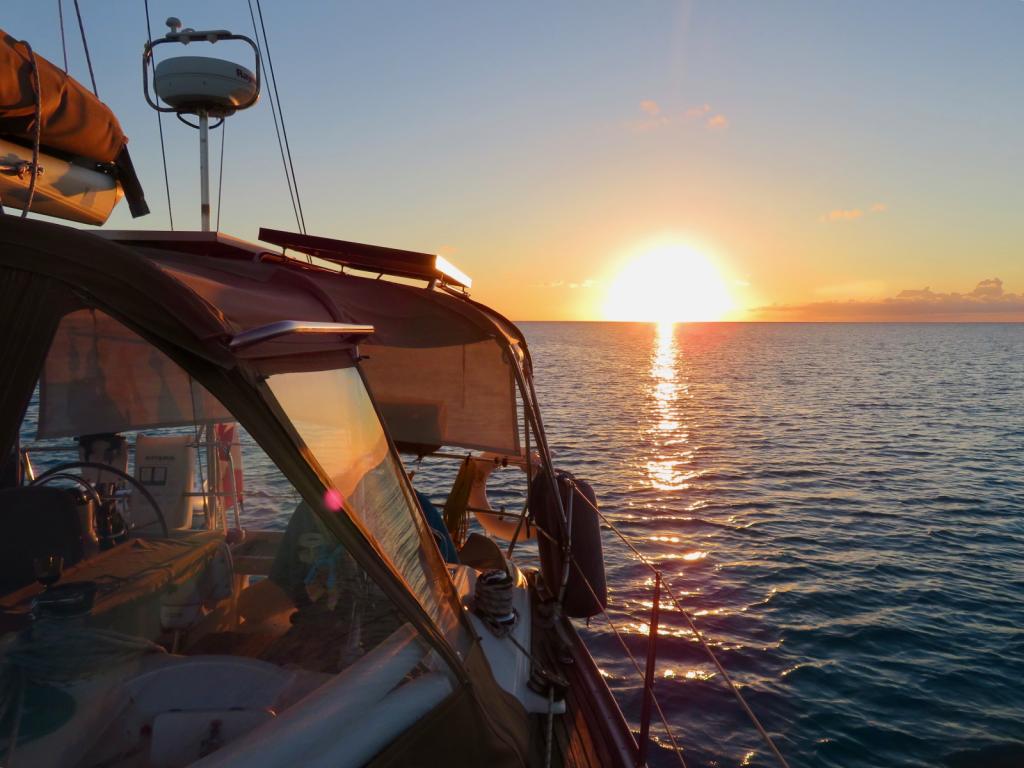 No exploring the anchorage or dinghying ashore for us. 48 nm, sailed in ten and a bit hours. Albeit it being a lovely day, it wasn't quite the ZoomZoom speed on the tack we needed to be on, but that's passaging and travelling when sailing, right?

It's our first time here, and Conception looks absolutely lovely in its isolation. 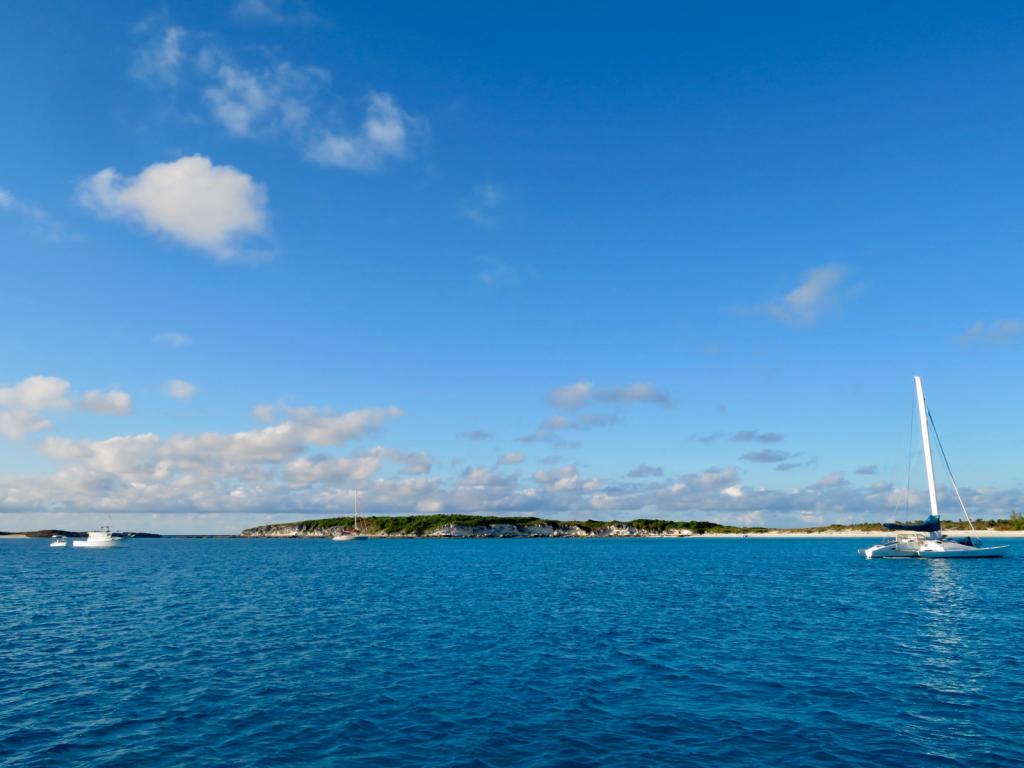 We placed it on our bucket list for if/when we return. {{ Always leave something to come back for has always been our motto }}. 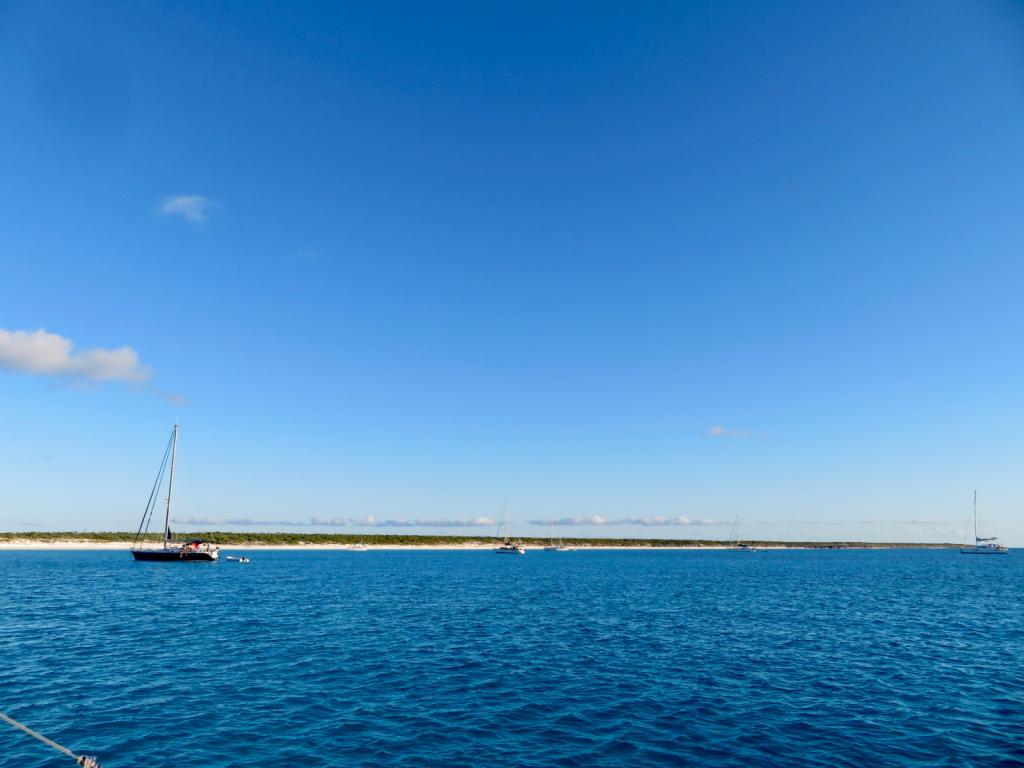 Conception has no cell service and the Capt'N was a little worried about the weather front we had been watching, scheduled to arrive Saturday evening/Sunday. We all know how weather works, right?

Our original plans had us holding up for a few days here while it passed, 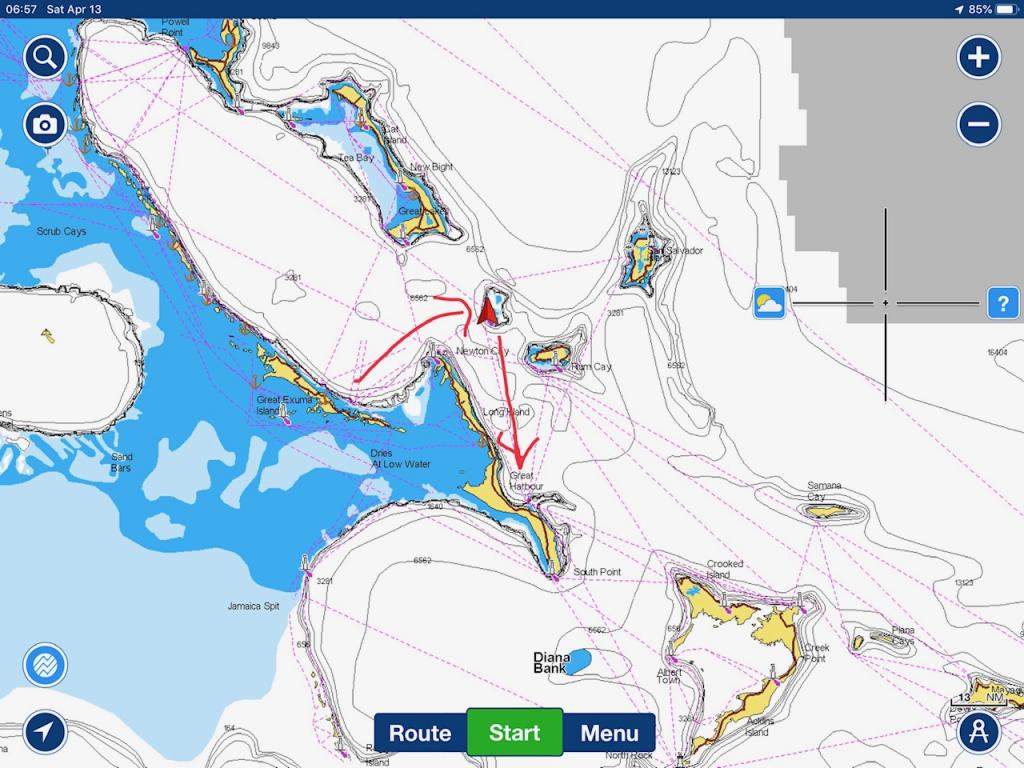 but the careful Capt'N of a sailor calculated our odds and travel time, lack of weather updates as our SSB was again not working, and well, we KNEW it was more smart for us to be anchored in Clarencetown, connected with the cell service collective, waiting for our weather window. {{ Sounds logical and prudent, don't it? }}

Second day of sailing. We got up early, and I boiled up some eggs for lunch. We weighed anchor, and drank our coffee as we headed out with the sunrise, anticipating another day beautiful day of travel and passaging. Our passage time had us scheduled to arrive in plenty daylight hours to scope out the new to us anchorage. In the hopes that the mixed Active Captn reviews of this place would provide us with a safe haven from the winds and seas that were forecasted.

The winds were E/SE, and we were close hauled, beating to Windward. Not my favourite point of sail {{ is it a anyone's? }}, but we were, in all honesty, gliding through the waves not too uncomfortably, but definitely not baking any cookies. A few conversations along the way had us considering our options should conditions worsen earlier than expected. We could go back to Conception? Especially after we heard the morning net announcing turtle tagging happening at high tide in the creek.

The winds were strong, the seas building, and we chose to keep going. {{ I ventured below for our LifeJackets, never leave Port without them, right? }} Should we turn back to Long Island and wait it out in Calabash, leaving our fighting around the top of Long Island for another day? Not really our favourite option, but the knowledge that it was a downwind fast track bailout option if we needed it to be.

The winds were a steady 18-22, seas building with occasional 5 knot plus gusts. We reefed the main before we even thought about it {{ wink wink }} and got into the groove, fighting the current {{ of course }} and taking the occasional wave over the bow. Enjoyed slanted egg salad sandwiches on a tense thigh muscle heel that required much coordination of muscles and one hand on the boat to make it down below, and back up gain,
for extra napkins.

After the halfway point, with about three hours left to go, the skies hazed over, when what should slowly define itself on our port side horizon but a visible squall line. The winds were now a steady 22-25 and steadily climbing, sea states building and white caps tumbling over the incoming swells. Radar revealed a long cluster of colour on the chartplotter screen, a conga line of squalls. Question was were we far enough on the edge of it to avoid the worst of it? The grey clouds were building and we bounced along, our anticipation building along with the darker skies. We saw some patches of blue skies ahead, hopeful that this was just a passing squall and not an early arrivlal of the front.

Two hours left to go, and we gritted our teeth, tensed our muscles and eased out the main as we turned downwind, reefed the jib, and tightened things back again as we came back on course, once again uncomfortably comfortable in the building skies of excitement. {{ Just where was that ditch bag again? }}

One and a half hours left to go, and we once again turned downwind, brought the jib in, started the engine, and upped the revs hoping the extra speed would allow us to outrun whatever nasties the dark skies might hold. Thankfully, when we looked behind us a little while later two of the dark squalls were now an event of the past, with nary a drop of rain shed on oursleves, salty sails or rails that had been immersed in the water a few too many times. We won't even talk of the soaking wet cushions or fenders that splashed the Capt'Ns behind every time a rogue wave hit the fenders the wrong way soaking everything in its wake.

And then, just like that, our legs relaxed as the winds lessened to the predicted 16-18 knots, the white caps slowly dissolving into the gradually diminishing seas and waves. The Capt'N suggested we could oust sails, and after the initial evil eye from me, I knew full well that we'd be going just as fast, if not faster, with sails, so out half jib!

Half hour left to go and we could see masts in the anchorage. We weren't going to be the only ones there. We had scoped out the marina, at $3/foot in case the conditions for anchoring were going to be impossible.

Ten minutes left to go and the very large bay was now clearly visible. The winds still howled but the motion of the ocean immediately calmed down to a slight chop as we made our way behind the reefs and Cay and into the bay.

52 nm and 8 hours later, we found our spot by circling around and assessing our depths, dropping anchor in sand. And then immediately picking it back up as our depths went from 3 feet under our keel to 0 {{ wait, what ? }} as we pulled back to confirm the set of the anchor. Second attempt gave us better results as we brought ourselves closer to Strachan Cay, avoiding the seabed cables, in twice the depth as before. 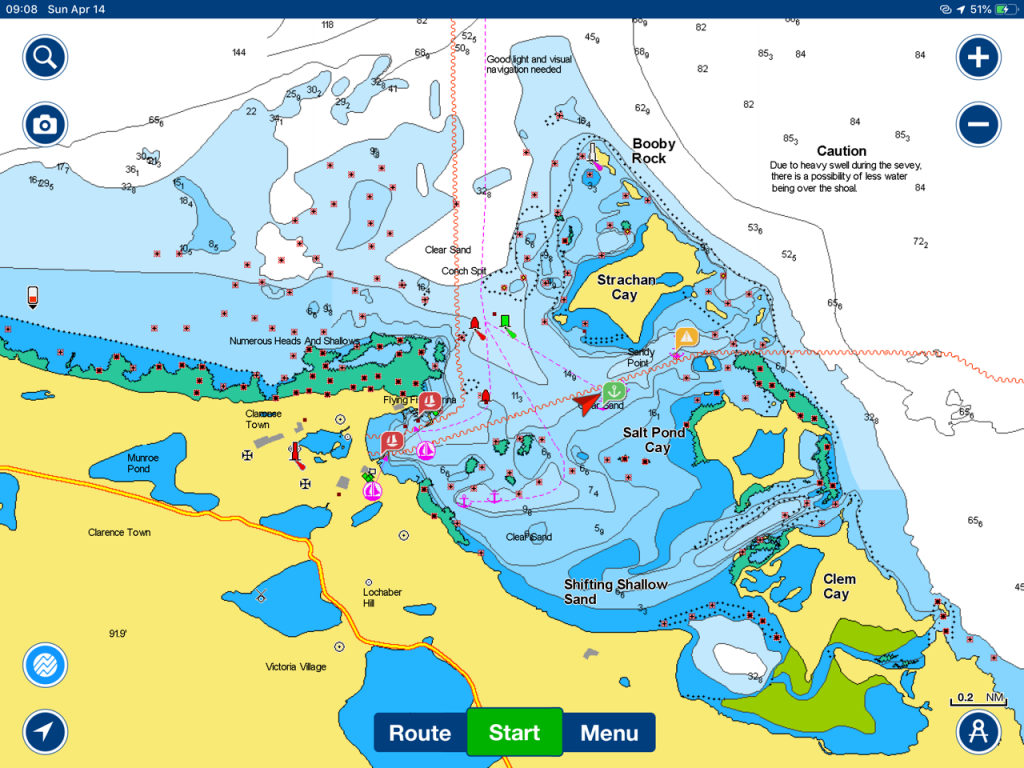 This time IceCold Arrival beers were opened before we even thought about thinking about putting the very salt lines away on the very salty decks and sitting our salty asses down. The last two days of sailing a reminder that not all travels and passages go as planned. That if it's going to happen, it's going to happen out there. And getting our passaging and travelling groove On.

I am dedicating this blog to two very dear people to us that we have both lost in the last two days.

RIP Chester King, friend and mentor to Dave, and Edna Godbout, a mother from another family, to me.

We are grieving that the sun has set for you.
More
Comments
Newer Older
Contents