Wait, what? Didn't I just write that it wasn't fun?

Don't get me wrong, as far as sailing weather windows go, this one was perfect. Sunny during the day. 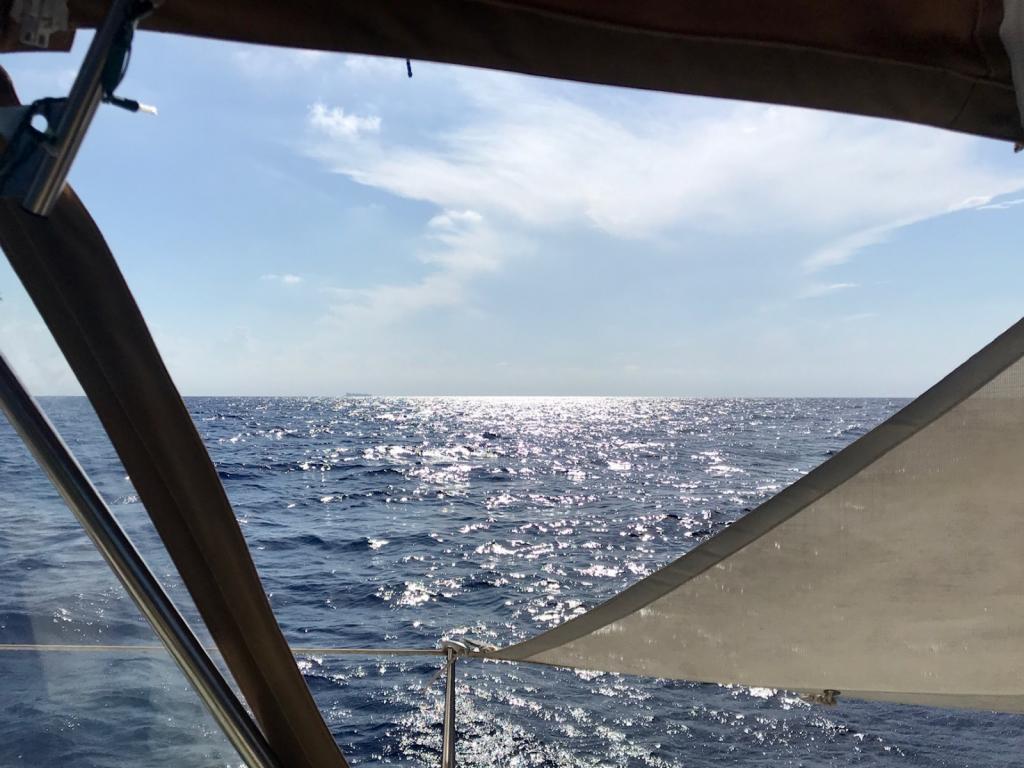 So sunny in fact that we totally replenished our power banks during sunny hours, all sans engine. The sun set with the Cuban mountains in the distance, barely discernible in the dusky haze and horizon. 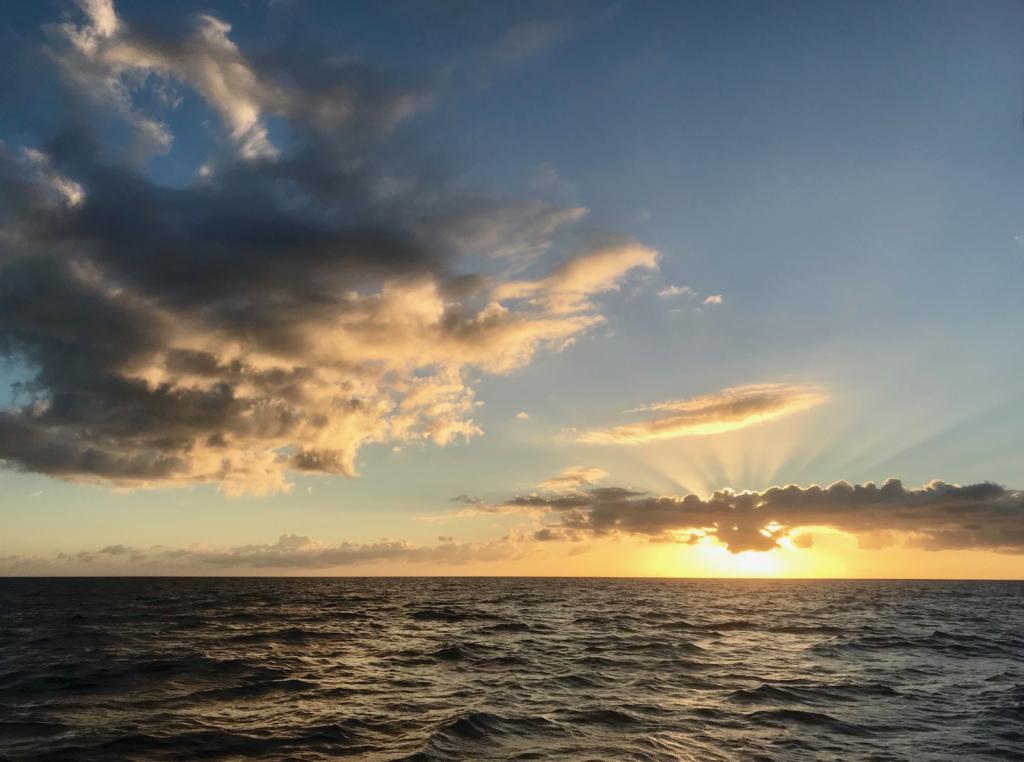 The stars were crazy plentiful blanketing the sky, only the darkness of nothingness peeked through between the bright twinkles. The bioluminescence in the water flitted about as Banyan left her wake, the flashing twinkles of light disappearing into the crashing waves behind us, as we surfed along. The adverse current? Not so adverse as we had thought. It was mild out. And later, an almost full moon rose, illuminating everything, leaving only the brightest of stars out to play. 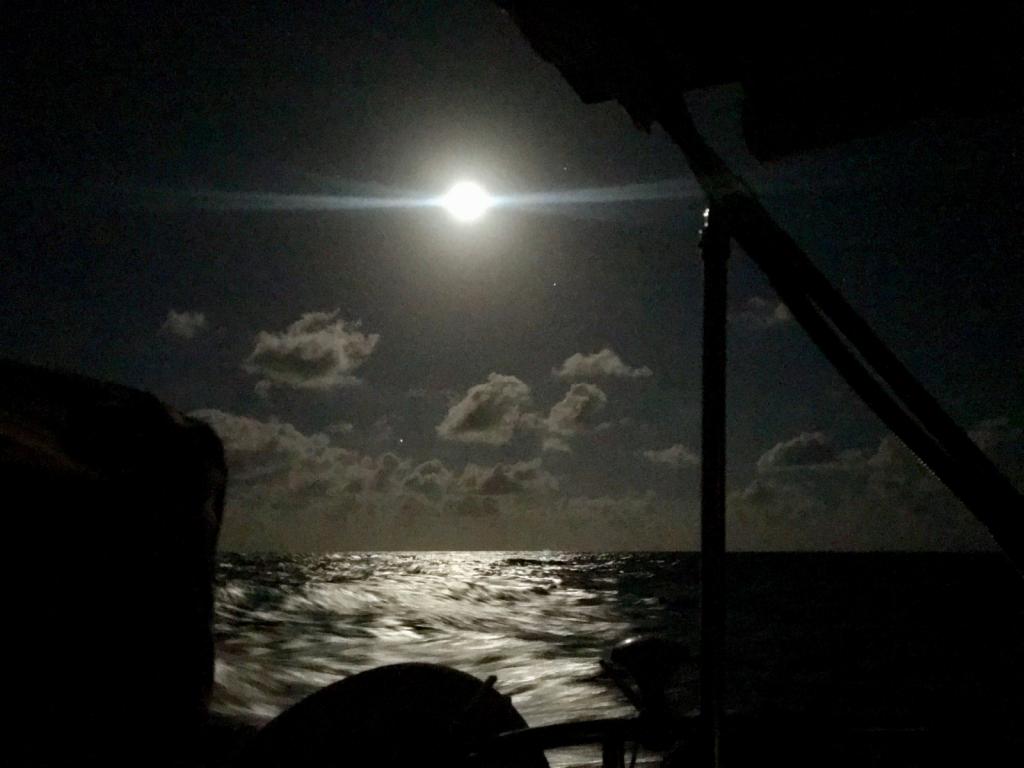 There was plenty AIS traffic en route to keep us busy. 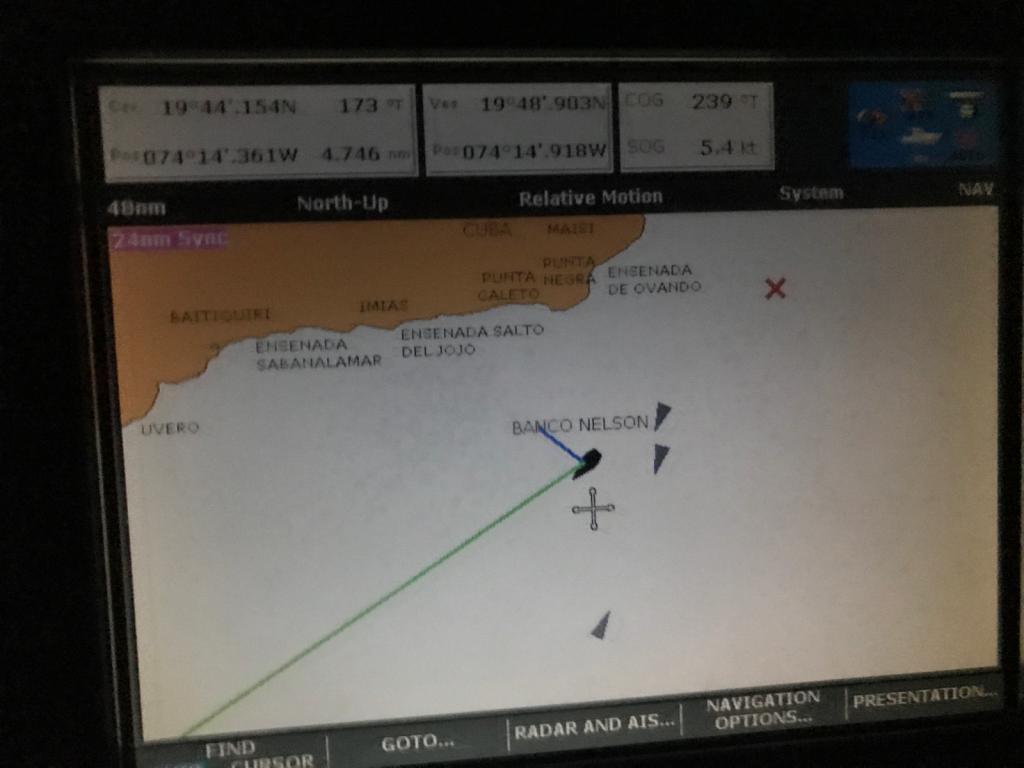 Not on our path busy, or do we need to worry busy, but keeping track of who's going where type of busy. Fun.

Our short time in Matthewtown was simply lovely. It being a long Easter weekend, it was quiet, and even the supply boat was late to the show, arriving Good Friday mid afternoon, to unload the supplies that the whole island showed up for. We didn't get much of a response for getting in to see the Flamingos or Salt Mill, and I guess we didn’t try too hard either, given the windy blowy weather. But we did walk to the Lighthouse, and the General Store and to Customs/Immigration. And for what it's worth, we would return to Great Inagua, to Matthewtown, to this very Dock in fact, in a heartbeat.

We still found ourselves with plenty to do. Worked on some boat projects. Made some meals. Got our ship into shape. You know, everything one needs to do in order to ensure the upcoming 240 nm passage would be as effortless as possible.

We waited at the dock for the weather front to pass, calm itself down. And watched and waited for the right window to materialize, collaborating with Chris Parker for a personalized routing. We had two options, Saturday departure or Tuesday. Saturday was looking nice and calm, the seas probably still disturbed if one were to venture out too early, but patterns were shifting. The sailing window wasn’t long, and too calm would mean motoring. All the way? Nope, didn't have the fuel for that and weren't keen on buying diesel from that ole closed gas station here in Matthewtown either. Tuesday was looking good, but much more brisk and boisterous, and although we would certainly make record times, *I* wasn't keen on boisterous {{ hello, funneling effects? }} and secondly, leaving Great Inagua on Tuesday, would put our arrival on Thursday, and now we’re almost a week later. 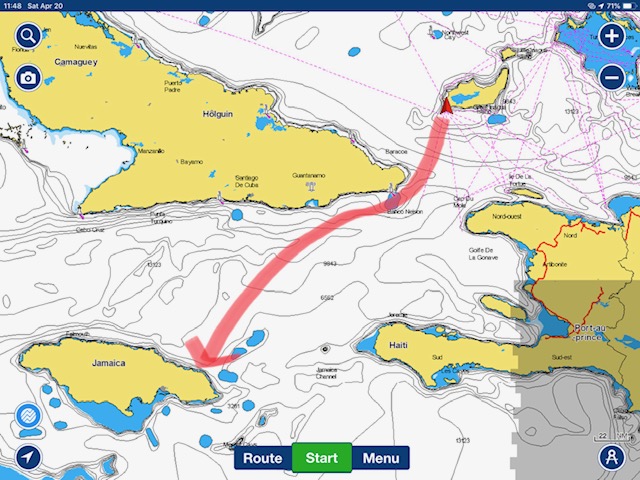 Then the wind died completely on Saturday but Sunday looking promising. So when all that was said and done, we cast off our lines by 10 a.m. on Sunday morning. It was a toss up, forecasts showed wind to sail early in the morning, but then we would run the risk of possibly being caught in a no wind zone. If we left late in the day, we'd catch the diurnal winds along Cuna perhaps, depending on our route, but still the same issue would develop. Somewhere in between lay the perfect angle if we could catch the winds at the right time, we could use them to carry us for most of the way, maximizing our sailing. Taking into account the funneling of winds that happens in the Windward Passage, the narrow waterway between two large masses of land, {{ Cuba and Haiti }} and note the wind shadow caused by Haitian lands. And all that trying to time our arrival in Jamaica for daylight hours. Now I remember why we took physics and math in high school.

Being prepped is easy. Everything else is up to Mother Nature and The Universe.

The anxiety that hits me as we prep for departure always takes me by surprise. A healthy dose of it is normal... after all, these are relatively long distances, perspectively speaking. I would think after all these years and all these nautical miles under my life jacket, that it would all get easier, the anxiety less. Instead, it's more. Go figure. A personal demon that has reared its head that I don't know how to dissolve into nothingness.

I wonder, as I prep the ditch bag, if it's because I'm simultaneously envisioning conditions that will require us to use it? I wonder, as I prep the meals, if it's because I'm envisioning a heel too far to one side to make any type of cooking comfortable? I wonder, as I watch Dave do rounds, checking lines and rigging, talk to his engine, if I'm thinking about all sorts of dramatic fails in our boat which is leading to knots in my tummy that need untangling. The more I know? The more I know I don't know or is it the more I know that makes me worry? {{ sigh }}

And then, like this passage for example, once we settle into the groove, and get a feel for the motion of the ocean, breathe in the warm breezes, feel the sun in our skin, and the salty decks under our toes, then all of a sudden all feels well. At least we're not beating to Windward like the last few passages, a necessary but certain Not Fun evil !

Time passed by quickly on Sunday. Breakfast rolled into lunch (tuna sandwiches) and supper followed right after. Where'd the hours go? When I mention I prepped meals, all I did for the last few nights while we were in Matthewtown was make extra of whatever we were having each night, saving the extra portions. So all I would have to do while en route is reheat, add some goodies, and voila... one pot hash I call it. Simple. Or if conditions were too brisk, we could eat it all cold if need be. Tonight we had leftover rice, broccoli and BBQ chicken to which I added fried onions, carrots. Spices, soya sauce and Sri Racha. Yum.

We settle into watches. The Capt'N is keenly aware of the traffic separation scheme off the E coast of Cuba, at Mayo Point. 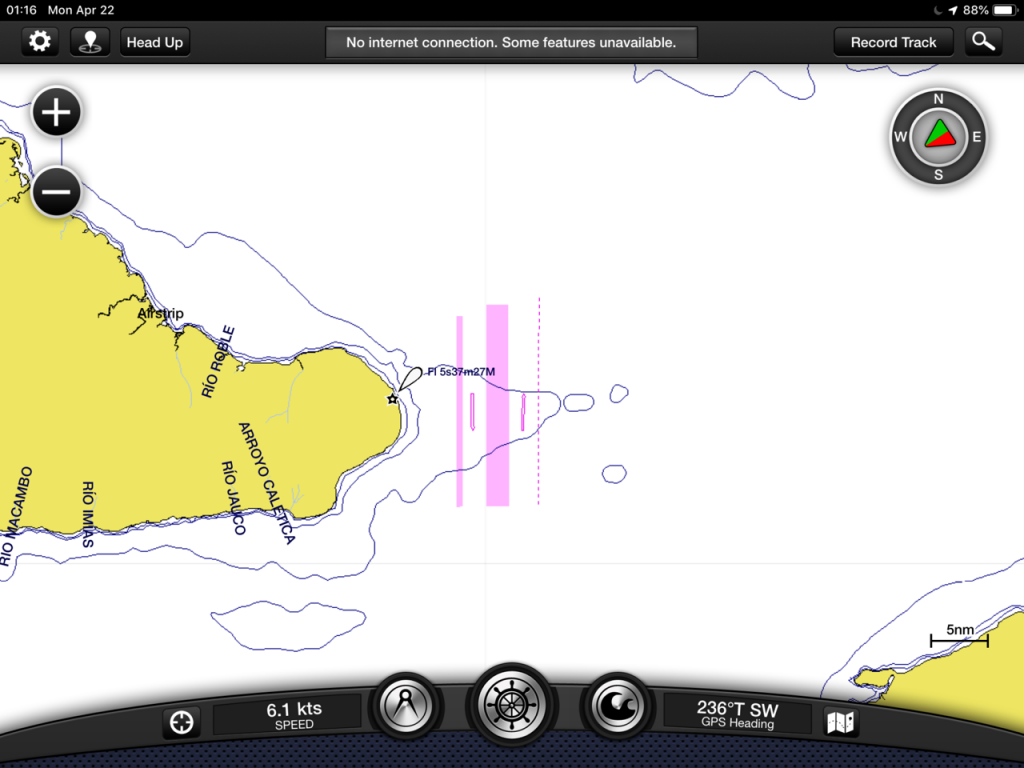 This is a designated large boat transit area, to stay out of. You don't want to get too close to Cuba either, or you may get hailed by their watchful eyes. I try and sleep but can't. He does for a bit. Then it's my turn. And why am I so hungry at night when we've not walked a single step all day?

We're sailing beautifully along, and Banyan's back in Caribbean waters. Water temperatures are 32 C. 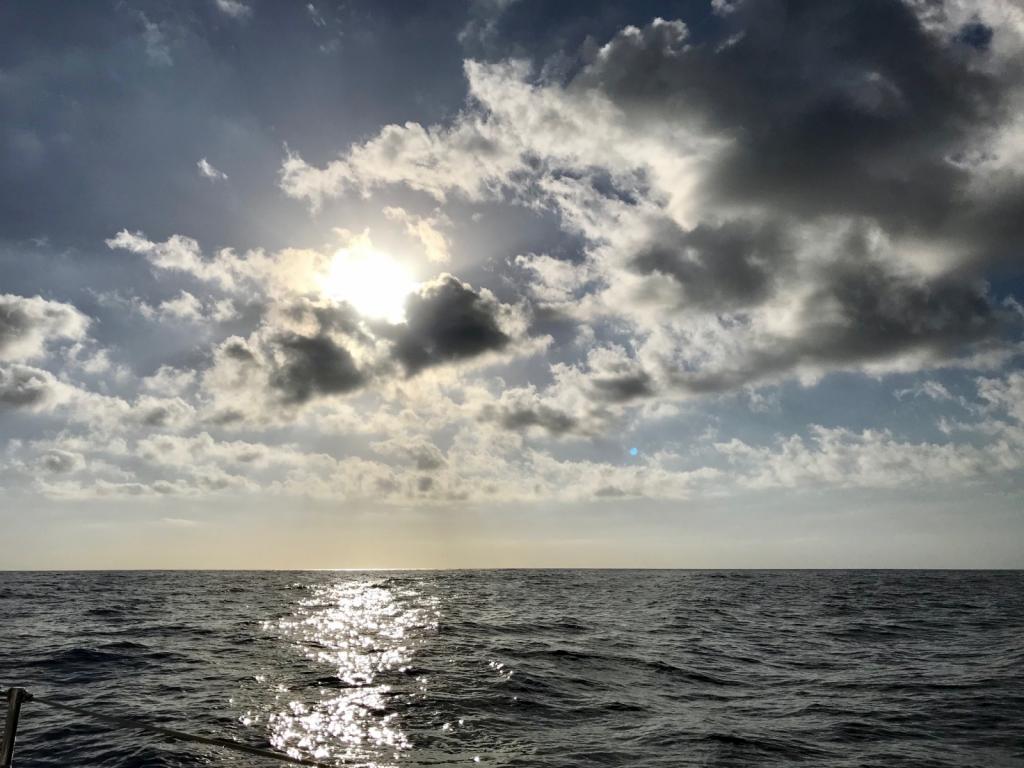 A few milestones come to mind: for me personally, one of them was when we sailed by the Statue of Liberty. Sailing by the oil platforms on our way to Trinidad. But sailing on the southern coast of Cuba? On our way to Jamaica? Never wouldve imagined I'd be doing that! Fun!

Once we're out of the transit area, we turn to starboard, staying out of the line of the cargo and cruise ships. Traffic jams appear! And all along the breezes blow allowing us to downwind sail in, keeping us going at speeds that might require us to have to slow ourselves down {{ as we really don't relish the thought of arriving and anchoring in Port Antonio in the dark. }} Not Fun.

So for now, on reefed job and main, we're speedily moving along a 4.5 nm/hour, which, although the Capt'N is smiling, is not quite his cup of tea, because he KNOWS Banyan could be sailing a lot faster, in these conditions. 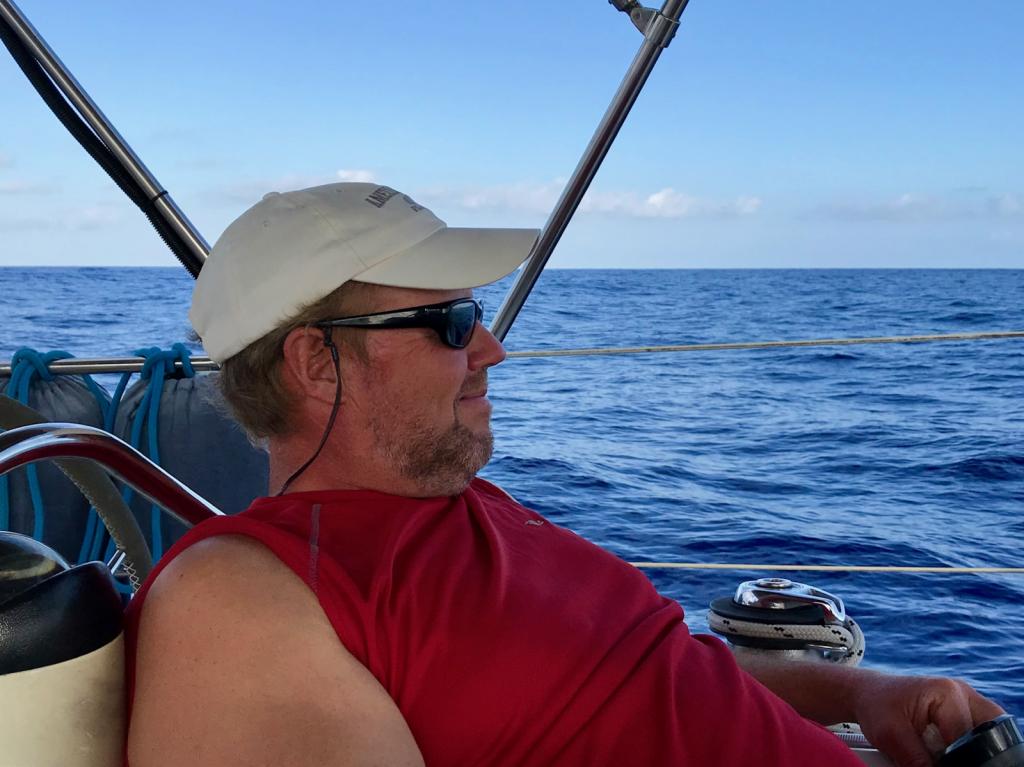 Tuesday arrival during daylight is best, so as not to have to enter an unknown to us anchorage at night, and avoid any holiday overtime fees for C&I.

I finally get my allotted thee hours sleep, but wake up with a wee headache. I stumble looking for Advil. The constant corkscrewing has rendered my body weak and my muscles constantly compensating for the rock and roll of a moving platform. My brain is still asleep because I forget to gimbal the stove, and the coffee brewing goes flying to the ground, brown liquid gold and grains everywhere! You don't need to be a sailor to curse, how could I be so stupid? Not Fun! No damage done except a mess on the floor, under floorboard, walls and carpet. There goes some of that water we just made. Not a fun way to start any morning. Especially because I only had three mornings of coffee rations left, and having to redo a pot? We're now a day short. Not fun.

In the afternoon Banyan had some illegal visitors! Three of them made us their home for a wee while, 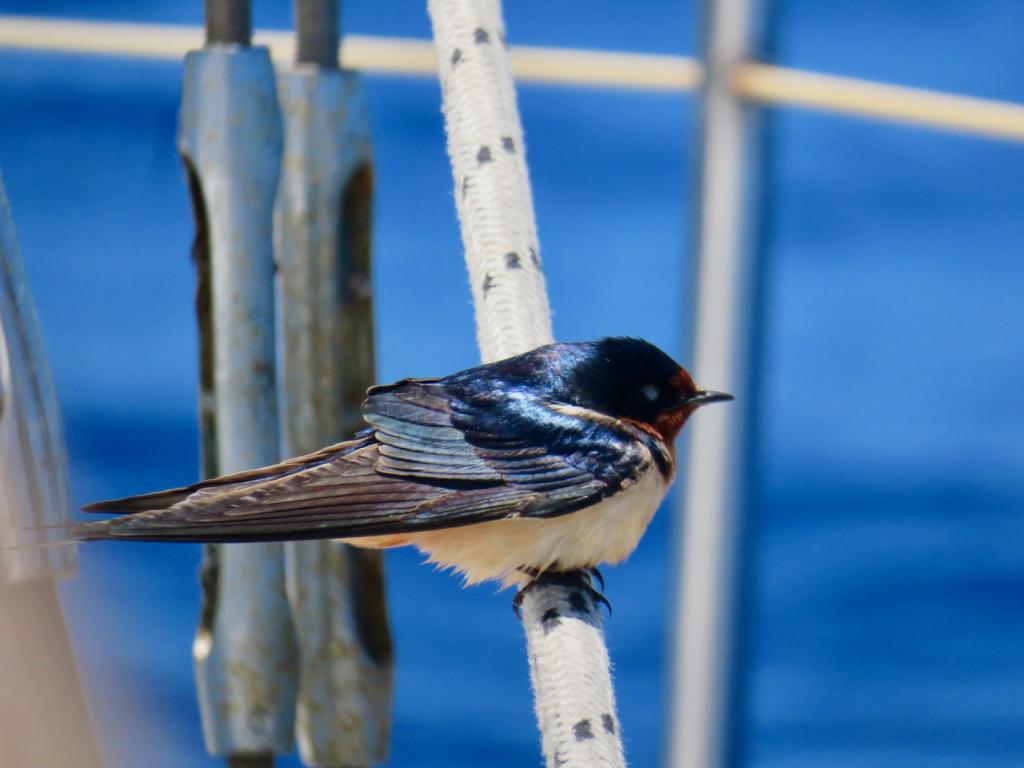 getting a rest and getting a Birds Eye view of our destination, eh? 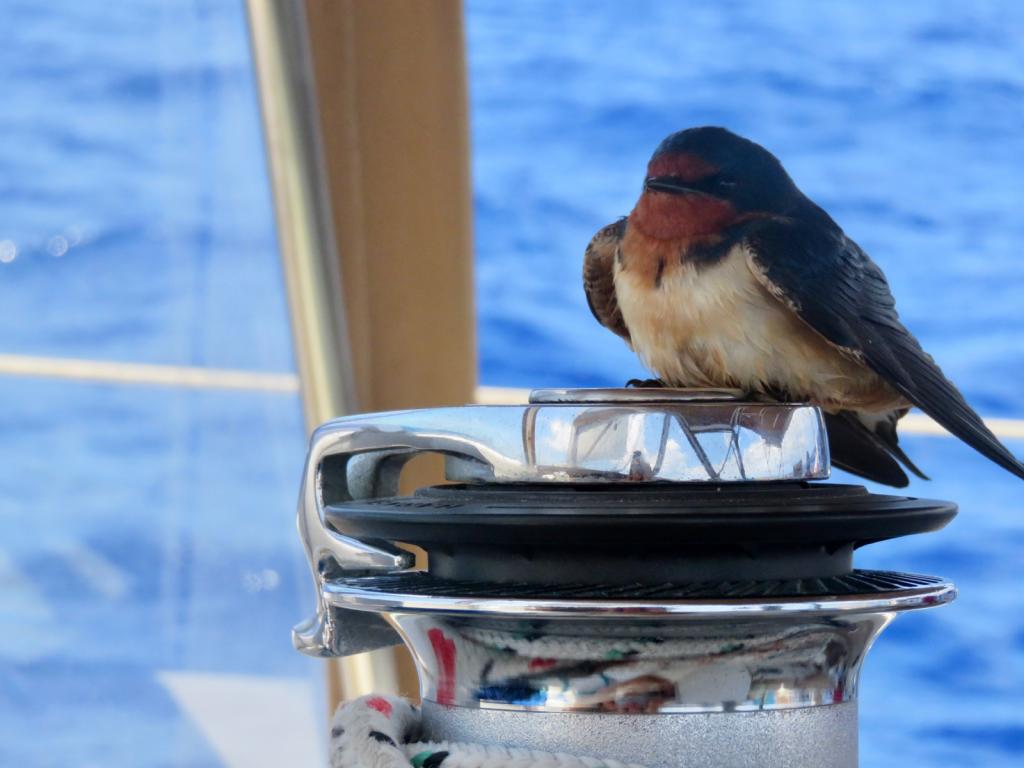 But he got a wee bit scared when he realized he couldn't fly through the Glass of the Dodger, and needed the Bird Whisperer to come to the rescue. 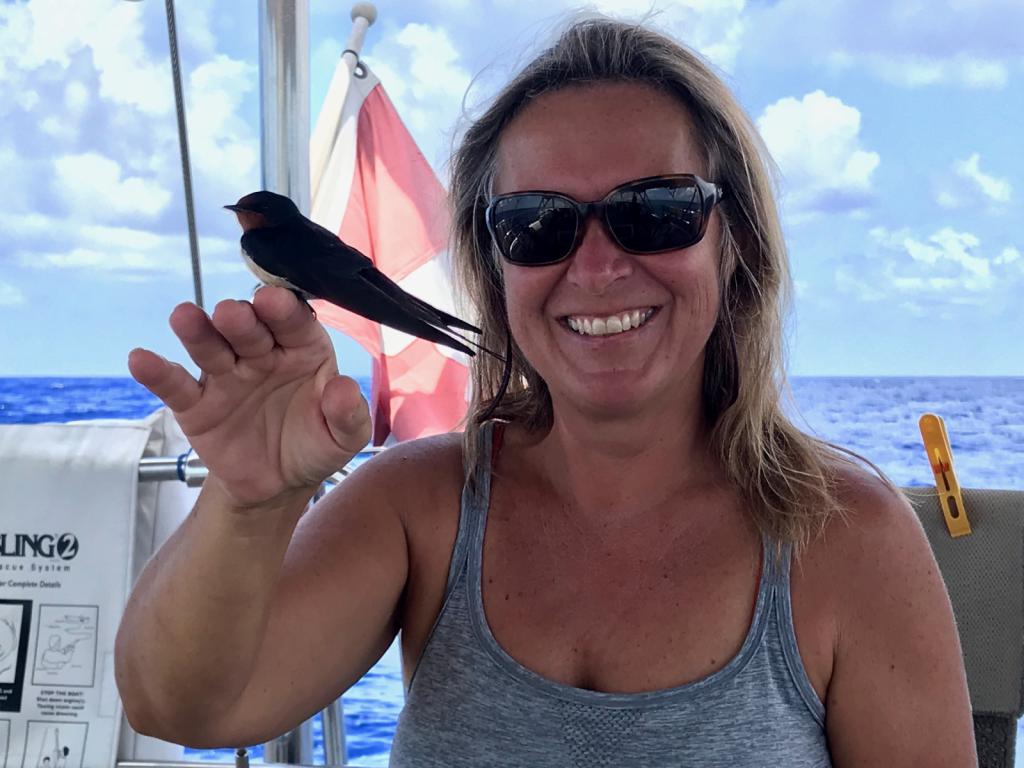 Double the Fun. A card game before supper? Sure, and I won, FUN! Followed by a One pot supper (pork tenderloin, potates, veggies). And then the winds died and we had to resort to motoring. Not enough wind and flat calm seas surround us as we try to avoid the biggest of the sargassum patches. We were anticipating some evening winds, but they never showed. Thankfully we motored at 3.5 nm/hour and the current pushing us at 1 kn, helped keep our speed at 4.5. Talk about efficient fuel consumption. 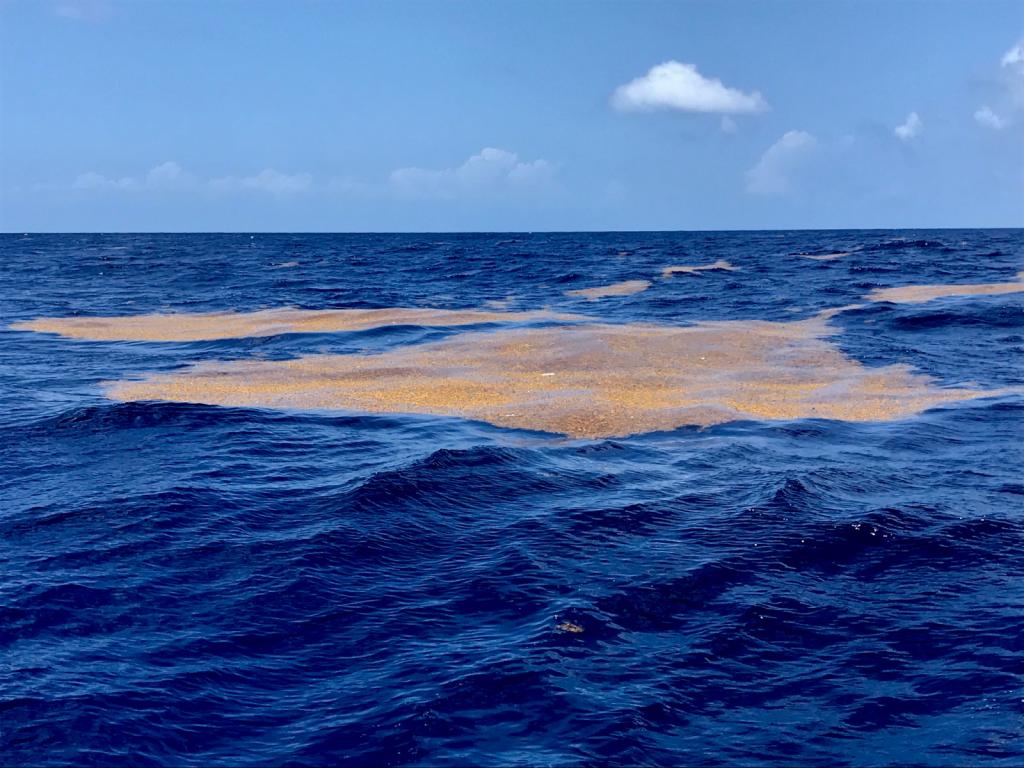 The sunset a great ball of red fire. The stars, even brighter than the night before. The moon-rise in hues of reds and oranges. We do two-three hour watches, grunting and mumbling the passage info to each other as we tiredly pass in the companionway, shedding our lifejackets and embracing our pillows down below. And the person left in the cockpit watches for signs of life out there. Only one non-AIS relatively small cargo ship crossed miles off our bow, headed to Haiti, by the Marpa tracks its radar pings left on the chartplotter. Interesting to see old radar technology at work, fun!

In the distance, heat lightning illuminates the skies every now and then. Not so fun to think about lightning strikes as I look up at our mast. I watch the miles count down, fun.

See the twinkles of Land off in the distance? Land Ho? 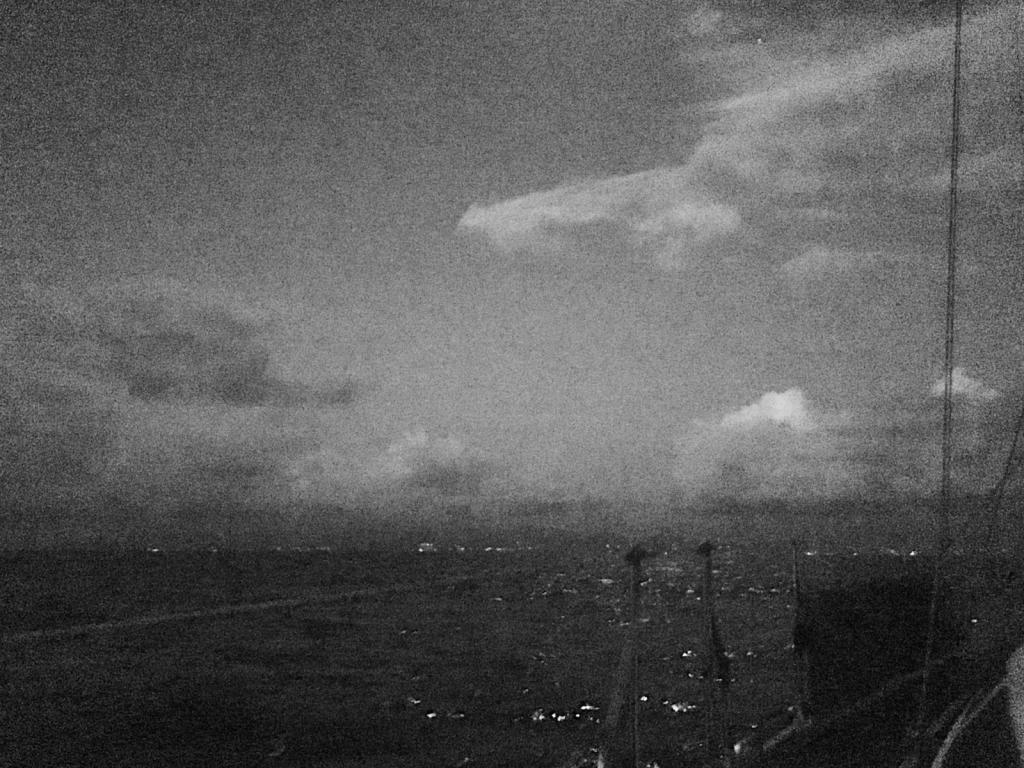 I wake up the Capt'N just half hour short of sunrise. As I know how much he wanted to see the sun rise as we're pointing towards the lush mountains of Jamaica.

We're heading in like Flynn {{ play on words since we're expected at the Errol Flynn Marina ! }}