A Hop or A Skip We've reached the Honduran Bay Islands. Only a hop, skip and jump remain. A Hop to Isla de Roatan, a Skip to Isla de Utila, and a(n) overnight Jump to Tres Puntas/Livingston (Guatemala). However, for right now? This sign says it all! Food and R&R !!

We're OhSo Close, but there's still some miles to be sailed under Banyan's keel. We've reached the Honudran Bay Islands, of which there are three. The first in the line going SouthWestWards, and second largest of the three: Isla de Guanaja {{ pronounced Gwanaha }}, next in line is the largest and probably most famous: Isla de Roatan, and last but not least: Isla de Utila, the smallest of them all.

It's been a series of three long passages to get here. The first being the Windward Passage, from Matthewtown to Jamaica, then we went from Jamaica direct to Grand Cayman, which was relatively easy. The last passage was gnarly, both for the last 24 hours of stronger weather, and the fact that I was rendered useless, there was nothing even remotely HaHa about getting to Guanaja {{ pronounced Gwanaha }}

We'd arrived Saturday afternoon and had no luck with getting money from the ATM, a SIM card, or clearing customs, however, the Port Authority had granted us permission to anchor over in El Bight for the weekend {{ not even 2 nmiles away }}, a much calmer anchorage, "Come back Monday" he said. I suppose in hindsight we could not have bothered, perhaps even have yellow flagged it overnight, and just kept on moving on in the morning but with the HaHa! type of Passage we'd just had, we chose to stay. Rest and Recover.

Besides, Sunday was Mother's Day, and we were anchored right under MiCasa Too. In fact we could hear the mellow tunes wafting down the mountainsides, along with the chirping of so many birds, we couldn't even begin to identify them. Our cruising friends who had come here before us, all raved about this place, "Order the LionFish" they said. Roger that. We sure didn't need a reason to get off the boat, or have something to eat that was not a One Pot Supper Dish. And, Arrival Beers?

We splashed our dinghy, meandered one way, these houses on stilts amaze me, found ourselves a spot, and found the path, and this is what we were soon faced with, which way would you go?

We were still a little tired, our sea legs making us a little clumsy and unsteady, and contrary to my usual OCD tendencies, I didn't even count the brightly coloured steps as we stepped Up, Up and Up. We stopped to read the signs along the way. Look at the views though, first one way, 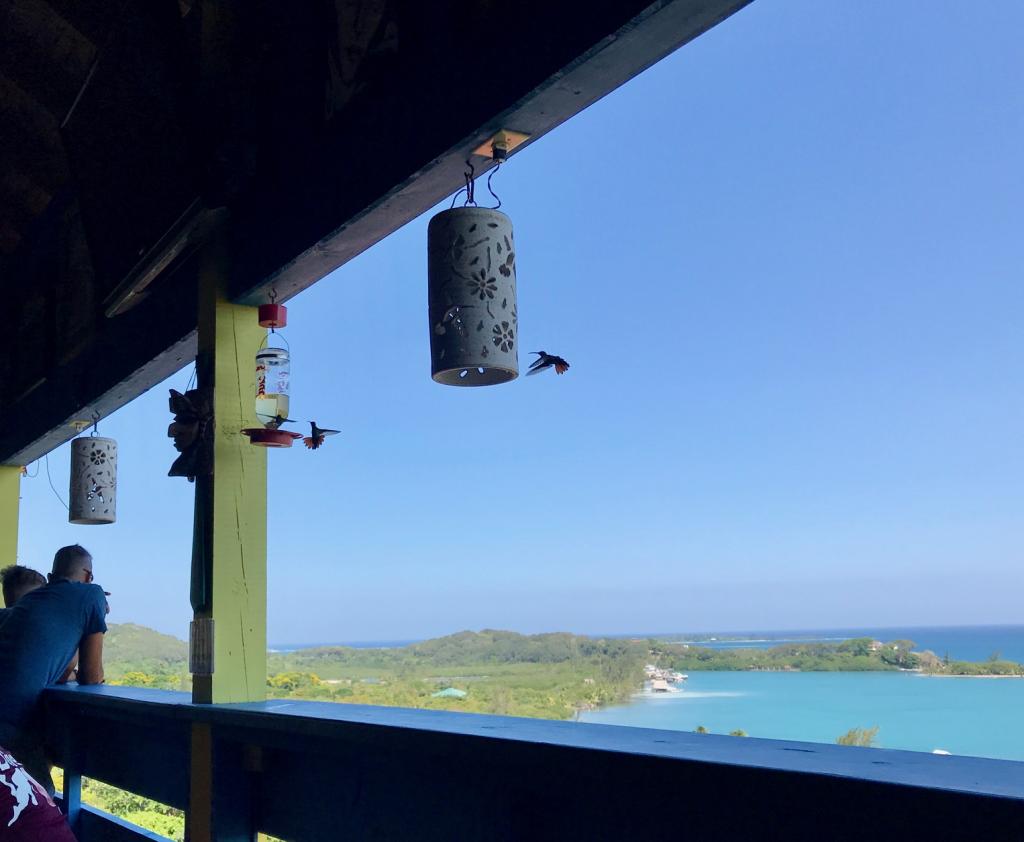 and no end in sight to the flitting hummingbirds. If you squint real hard, you can find us anchored out there in the Bay. We tried to order the lionfish dish, but it was the one plate on the menu they were sold out of. Second choice? The MahiMahi and the Bonacca Style Shrimp. {{ you know we were tired when the Capt'N agreed that we would share !! }} The ambience and atmosphere was lighthearted and fun, the food especially delicious. Lisa's MiCasaToo's pepper sauce was grand, if we weren't soon emptying the boat for storage, I'd have bought a whole case of it.

Off in the distance you could get a clear view of the very intriguing Bonacca Town. This tiny cay is the capital of Guanaja, and most of the Guanajians live here, instead of the large, lush island behind them {{ the one we were presently on, enjoying the views }}. Why everyone chooses to live here is intriguing. Imagine a flat New York City, wooden houses standing precariously on stilts, all meeting the canals of Venice. The roads are about as wide as sidewalks, there are no cars scooters or bicycles allowed here. With time, the village has expanded outwards, all on stilts over water.

History relates that on 30 July 1502, on his fourth voyage to the New World, Christopher Columbus landed here on the North Side of the island. Called Guanaca by the natives but Columbus needed to re-name it {{ of course !! }} calling it Isla de Los Pinos (Island of Pines).

No wonder as the lushness {{ can you really call pine trees lush? }} overwhelm the hillsides. The palm trees by the waterline, followed by dense coverage of pine trees that disappear into the mountainous depths behind. The island has only one road, and the only way to really get around is by boats. There is a channel, called The Canal, that takes you from the South to the North but dare we say? We were kinda tired and it was kinda choppy out there. We're already looking forward to come back next season and spend some time here.

Monday was busy in Bonacca Town. It wasn't hard to find the bank, the only place with armed security guards standing outside. They stopped us from going in, asked us to remove our hats, hand over our phones and backpacks, before proceeding any further. Por favor señor, pump action shotgun hanging loosely over his shoulder, yet his hand at the ready.

I told Dave I'd wait outside, and he handed over his stuff to me. He disappeared inside, and then re-emerged a few moments later. He'd forgotten his passport. He needed to get frisked before they would let him out, grabbed the passport, and re-checked again before going back in. And then needed to redo it all over again, as he mistakenly took my passport in, instead of his.

I spent the time chatting with the security guard, as well as a few locals, all standing around, that were curious about the new gringos in town. All as friendly as could be, telling me about their town and their lives, asking about ours. Their English much better than my Spanish. But even so, I had trouble understanding some of the Spanish words, as they seemed to speak a type of Guanaja-ese, a local patois perhaps?

Once the banking was done, we walked over to the Customs and Immigration, where the door was {{ surprise, surprise }} locked. So off we went to buy a Sim Card instead.

Then back to Customs, where we found the door open this time. Checking in was a breeze with copies of our Tripulantes {{ crew list}}, Passeportes {{passports}}, Boat Registry and our clearance papers from Grand Cayman. He did all the paperwork, and moments later we gave him $5 U.S. per person and he handed us the stamped a.o.k. and with a smile welcomed us, "Bienvenido".

We'd recently been hearing rumours about the Utila officers being AWOL, and so I asked him if he could confirm if we would be able to clear out of Isla Utila in a few days time. He was kind enough to call the Utilla customs to confirm that there would be someone there daily for us to clear us out.

There was a couple trying to clear in along with us, that was having a hard time of it. They had come from Grand Cayman as well, but their Zarpe noted Guatemala as their destination. They had stopped in Guanaja because of weather {{ NoWonder given the experience we'd had }}. They were sternly told to write a letter on why they stopped here and not continued on to Guatemala. In Spanish. The Officer really wasn't smiling at them.

Once done, we then checked in with the Port Authority, a large man with an even larger smile {{ if you got him to smile that is}}. Once again, copies of boat registry, passeports, and tripulantes needed to be produced. He also required two current photos of the boat anchored with familiar buildings in the background, side and back. He did all the paperwork and charged us $10 U.S. {{ 240 Lempiras}}, and didn't have change for our 250 Lempiras either, a bit of a scam, but you know, what'dya do, eh?

We later found out that that couple that needed to write that letter in Spanish? Even the Port Authority didn't take well to their being here instead of Guatemala as their Zarpe indicated. Didn't grant them status to be here, and gave them two days to leave. Ouch.

We hoisted dinghy back on deck, strapped her down, and prepped for an early morning departure, not without first enjoying the Sunset. 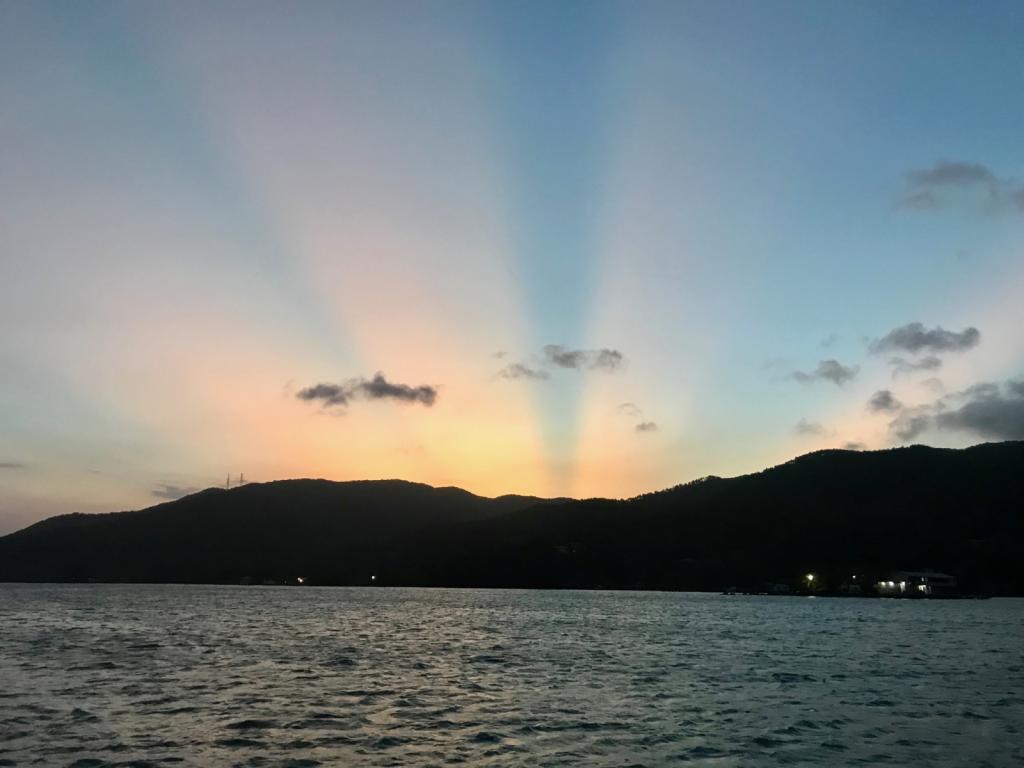 We would either stop in Roatan along the way, hopping the trip in two, or keep going, as it was only 65 nmiles skip to Utilla.

What is it the say about falling off a horse? If you do, you just gotta get back on again? My bout with whatever had me incapacitated during the last passage left it's mark. Both physically and emotionally. I was busy talking myself down into the depths of uselessness and depression, calling myself a Salty Coward, not a Salty Sailor, but then in my Thoughts Become Things mentality, I knew I better not think those words. I remembered and tried to gain confidence in the many miles under my lifejacket and Banyan's keel. I re-visited, with a smile, the many places I've been and seen, how I'd safely gotten there, and tried to find, empower and jump start my abilities.

We headed out at daybreak, into the seas and waves and fetch that is the result of incessant 20-25 knots of wind, gusting 30-35. I was feeling better though, bravely sitting at the wheel, getting my bearings, inhaling the movements and momentum, watching the 2m waves behind us, making sure that Banyan was positioned correctly to ride them down. She's sturdy and strong, and I was the weak one for believing otherwise.

Once we got the boat on course, we surfed along at 6-7 knots downwind. And kept that up for quite a few hours. The skies were blue, the sun was shining, it was all good.

As we approached Roatan we discussed stopping or keep on going, and it really was, for all sailing purposes, a great sail. We weren't overpowered, we weren't in danger, we were zooming along. We chose to keep on going. 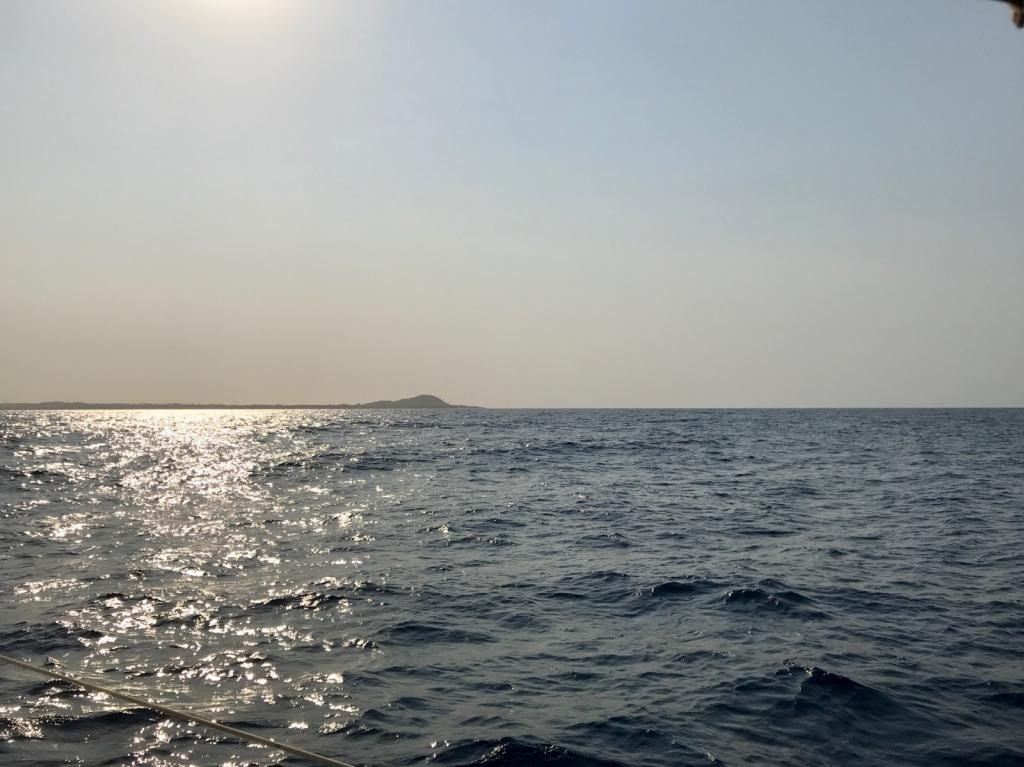 As the day wore on, the winds settled, the boat settled, the seas settled. I settled. In fact, too much so. By 2 we were bopping around with a mere 10 knots of wind behind us. Going absolutely nowhere.

It was on with the engine, the boat must move on. 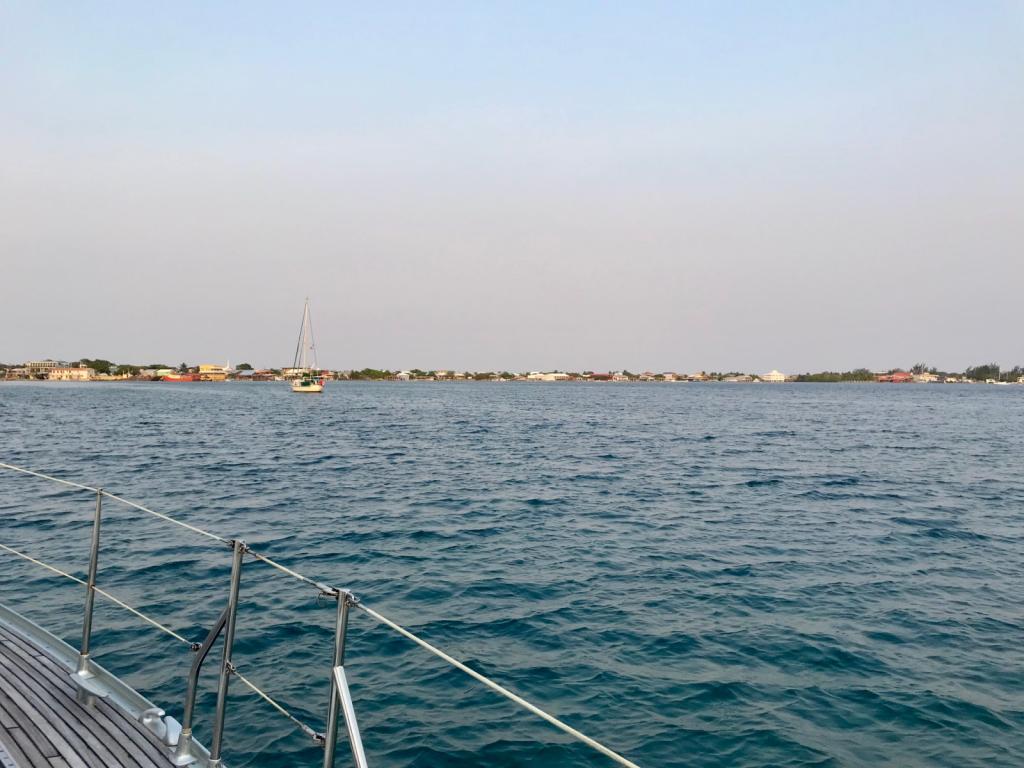 We made a bet as to how many boats would be in the anchorage when we arrived, Dave voicing a dozen and I settled on 8. Neither one of us won that bet, there were 2.

And we knew one of them from our Eastern Caribbean Sailing Days: Gregory and LizAnn of SV Lagniappe!! We circled around their boat waving our hello's, and then dropped anchor not far from them.

Ahh quietness soon descended, only the sounds of the tropical birds in the hazy smoke filled skies overwhelmed our senses.