But where exactly IS home when you're sailing ON, or driving IN, your home, going from place to place, exploring the magnificent Lands and Seas of our beautiful Earth? I guess for all sorts of heartfelt and soul enrichment purposes, home is wherever you are as long as you're with whomever makes your heart sail.

To steer this to all things adventuring {{ but more specifically sailing }}, home sometimes needs to be adjusted pending the seasons, the most important of which, for cruisers, is H-Season. H standing for Hurricane, and the season, climate change notwithstanding, weathering around June to November.

The biggest issue facing all cruisers when planning the season's cruising areas and adventures is that the end of the cruising season, the "home" of the boat, should also be planned, researched and organized {{ preferably well beforehand. }}

Our first year of sailing, and then for several years afterwards, Banyan's H-Season home was in Grenada. The last few years we made Holland Marine, in Green Cove Springs (Florida) home for the H-Season. And now? This year? We've arrived somewhere new and are making Catamaran Marina, Rio Dulce, Guatemala home for Banyan for H-Season.

For us, choosing Banyan's home for the summer is a two fold consideration. A healthy mix between where we want to be, and where does our insurance requirements allow us to be? When we spontaneously chose the Western Caribbean as our end destination, we first needed to do some research. We needed to change our insurance parameters and then find out what our restrictions and/or requirements were? Where and how would we leave the boat?? {{ On the hard? In the water? }}. There were a few more issues to be considered, but those two were really our primary sailing directives.

And that's how we ended up on the Rio Dulce River, gobsmacked, as we motored through the canyon like fjord, the immensely tall, crazy lushy shades of green with the sounds of howler monkeys echoing back and forth, and spent our first night in the calm and quiet Texan Bay. 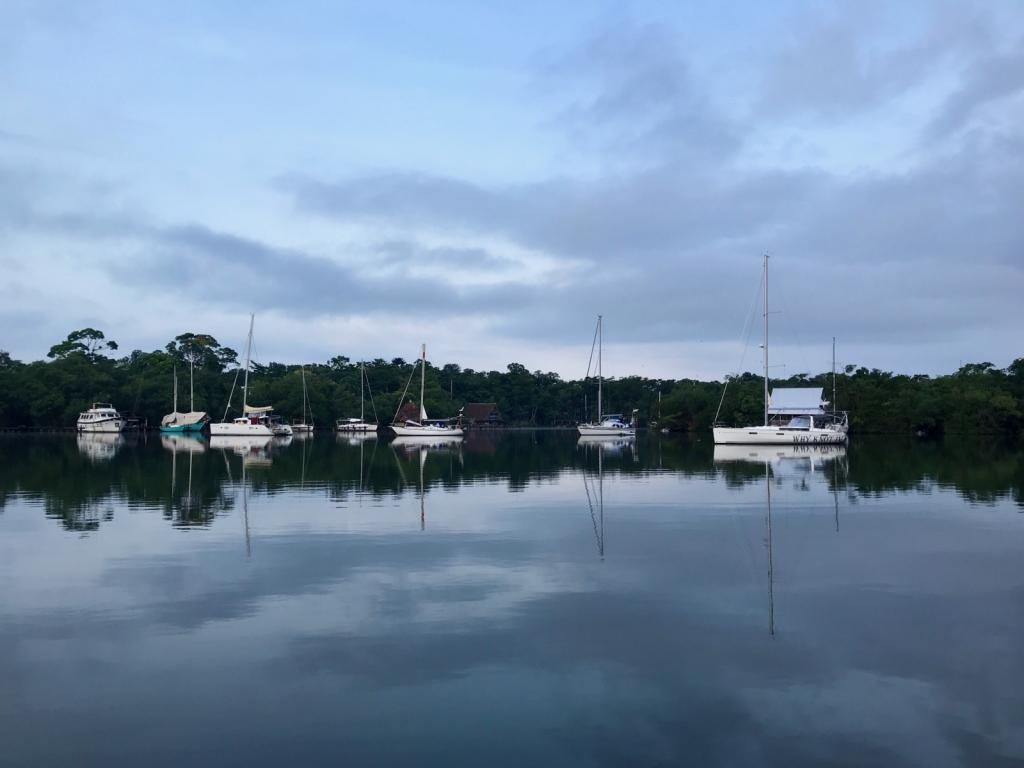 Where we woke up the next morning and enjoyed a seeing a whole different way of life happening around us. The local kids heading off to school for just an example. 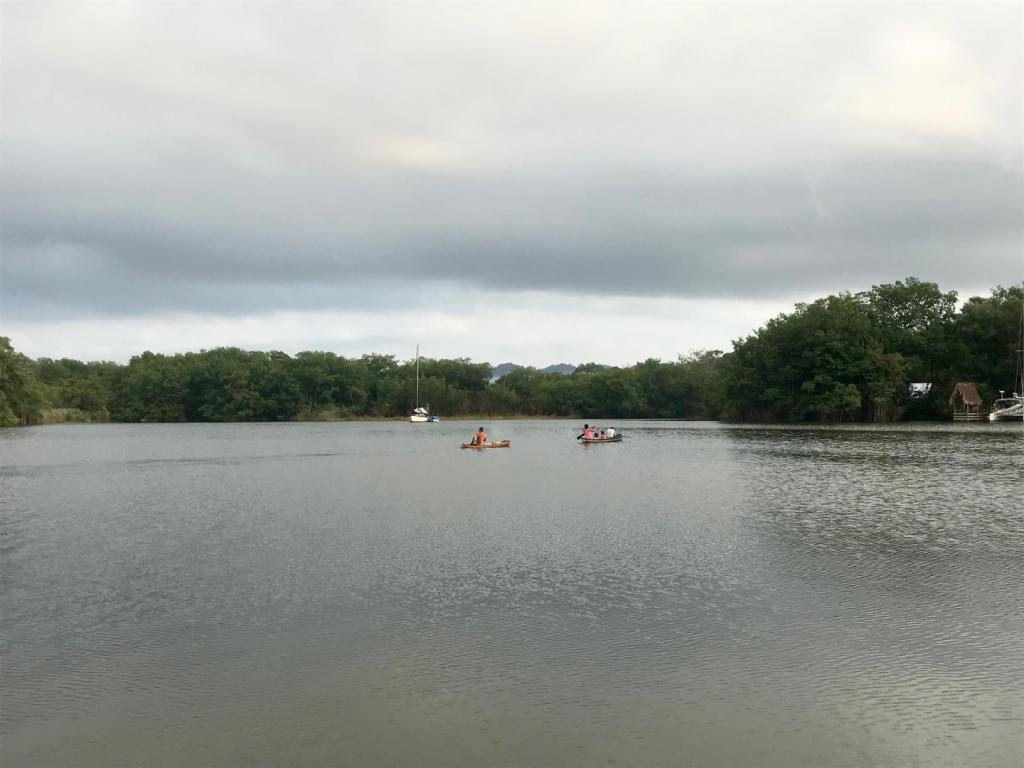 We left a little while later, motoring along, 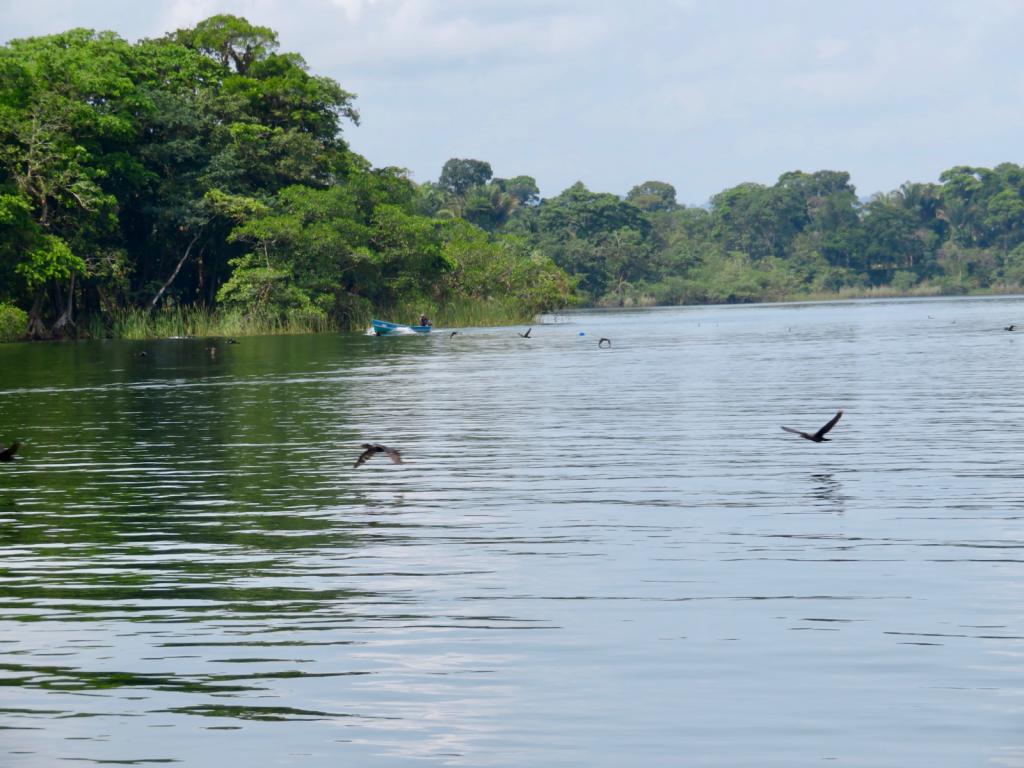 into the peaceful calmness, 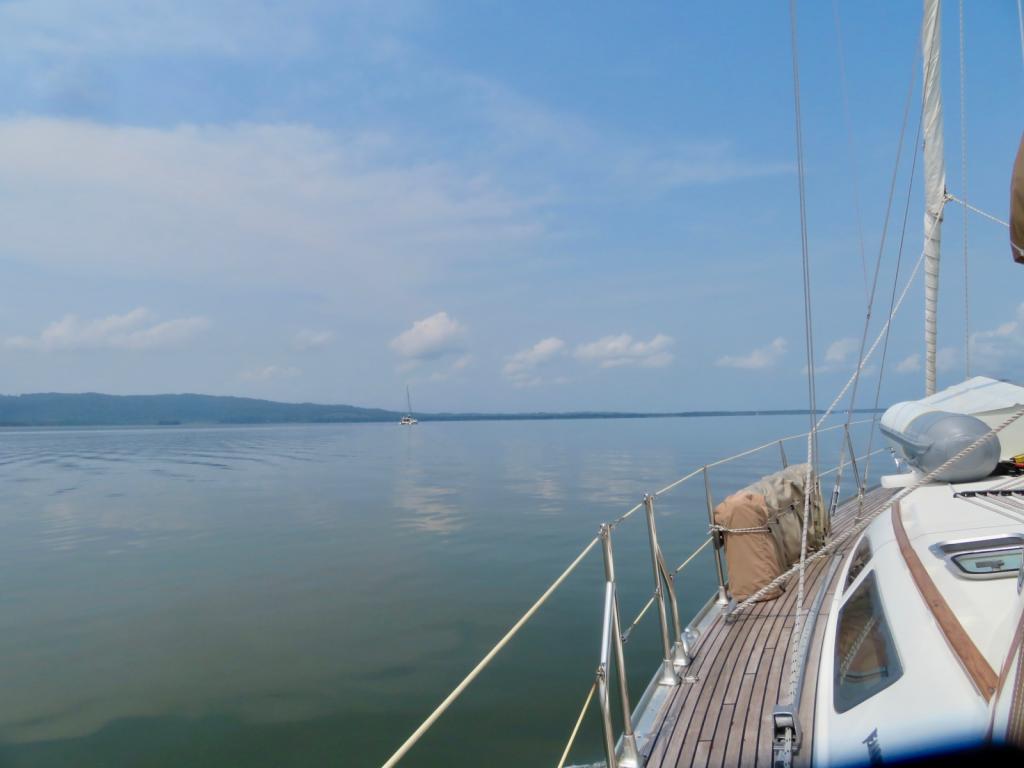 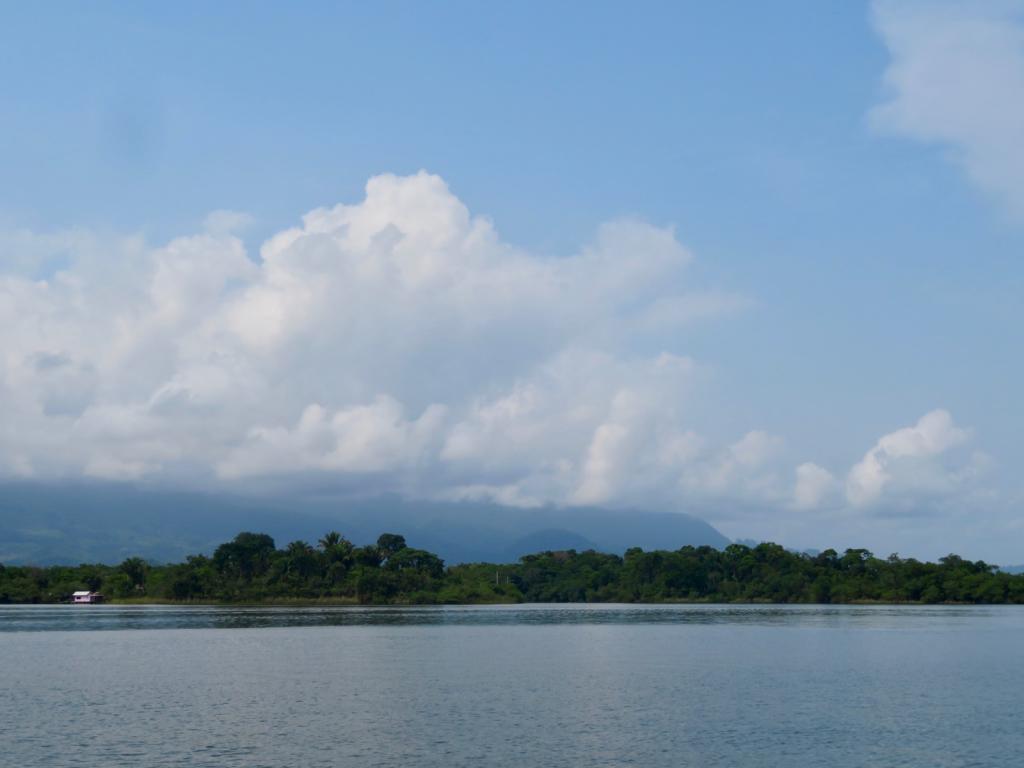 On the 11th of April we left Elizabeth Harbour, Georgetown (Bahamas), sailed round-a-bout a total some 1385 smiles, in a total of some 238 hours. Enjoyed some quick stops in Jamaica, Grand Cayman, Guanaja, Utila, Tres Puntas and then? On the 21st of May, 39 days later, we motored SV Banyan alongside and turned the engines off. 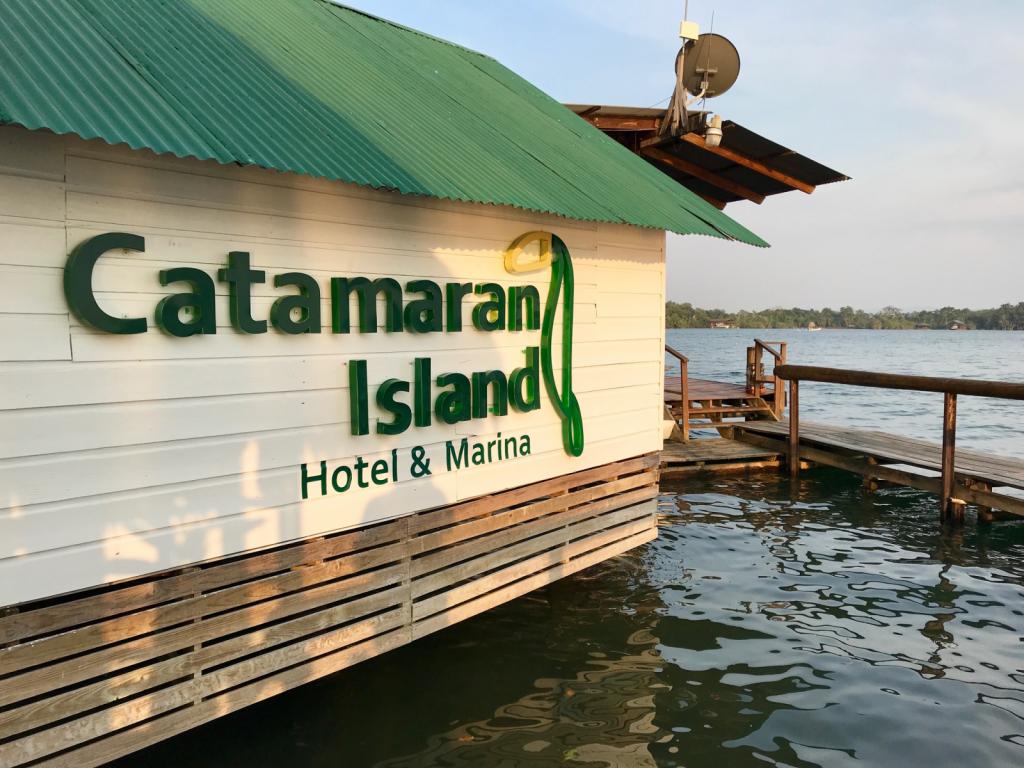 We live in a technologically advanced time, where the information of the world is literally available to us at the touch of the keyboard. As long as there's {{ fast and furious, and not frustrating }} WiFi, anything can be researched, and so when we were looking for the ideal H-Season home for Banyan, our friends told us to point our bow to this place.

Friends' sage advice, previous experience and calls of "Come!" notwithstanding, we immediately liked the feel of the photos we Googled. We wanted IN, and so we booked IN! However, there's nothing like getting here and seeing it all with our own eyes, because sometimes, photos just can't, and don't do it all justice {{ sadly, this can work both ways! }} However as soon as we stepped off the boat and onto our boardwalk of a pier, we were thrilled that it was even better than we could've imagined.

The best part was the crowd of friends and new cruising neighbours standing there, waving hello, waiting to take our lines. Friends we hadn't seen since our Eastern Caribbean sailing days were there with a smile. Made our hearts sing!

The views from our cockpit, 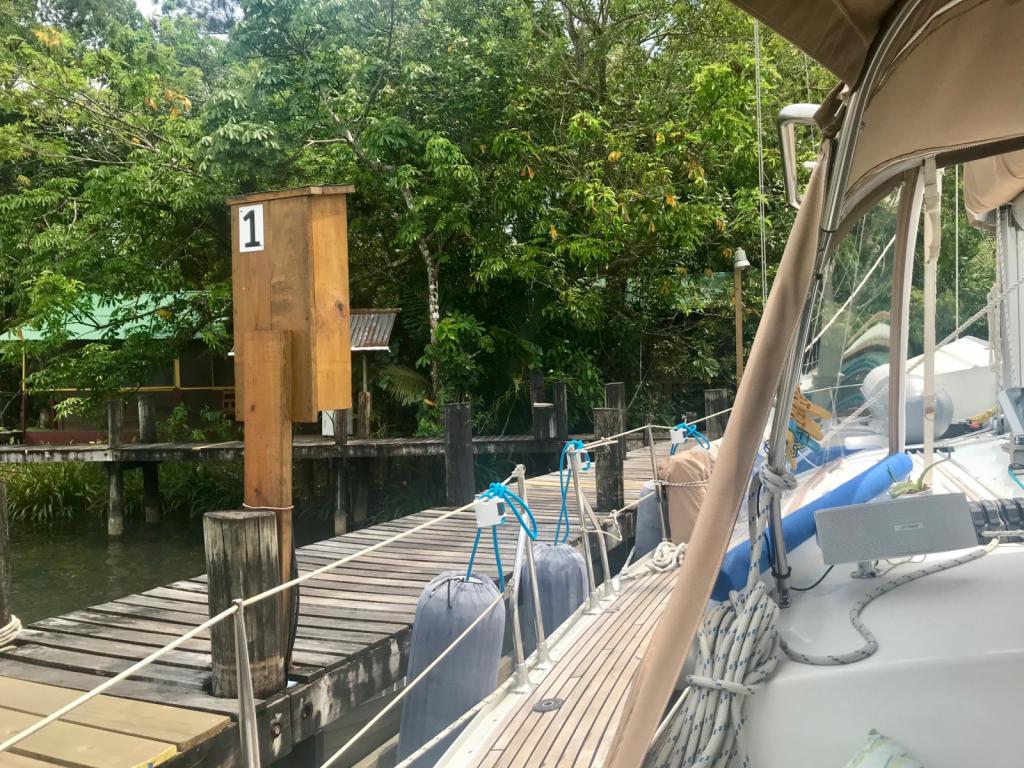 and the views from the boardwalks as we enter the property. 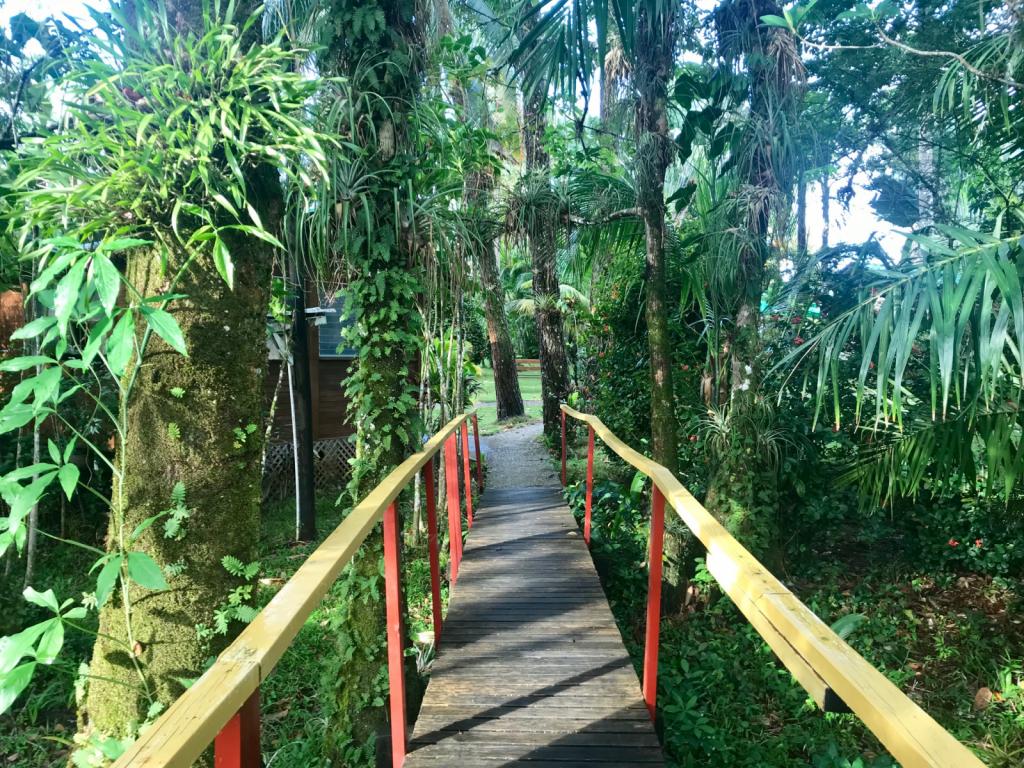 The views with morning coffee in hand. 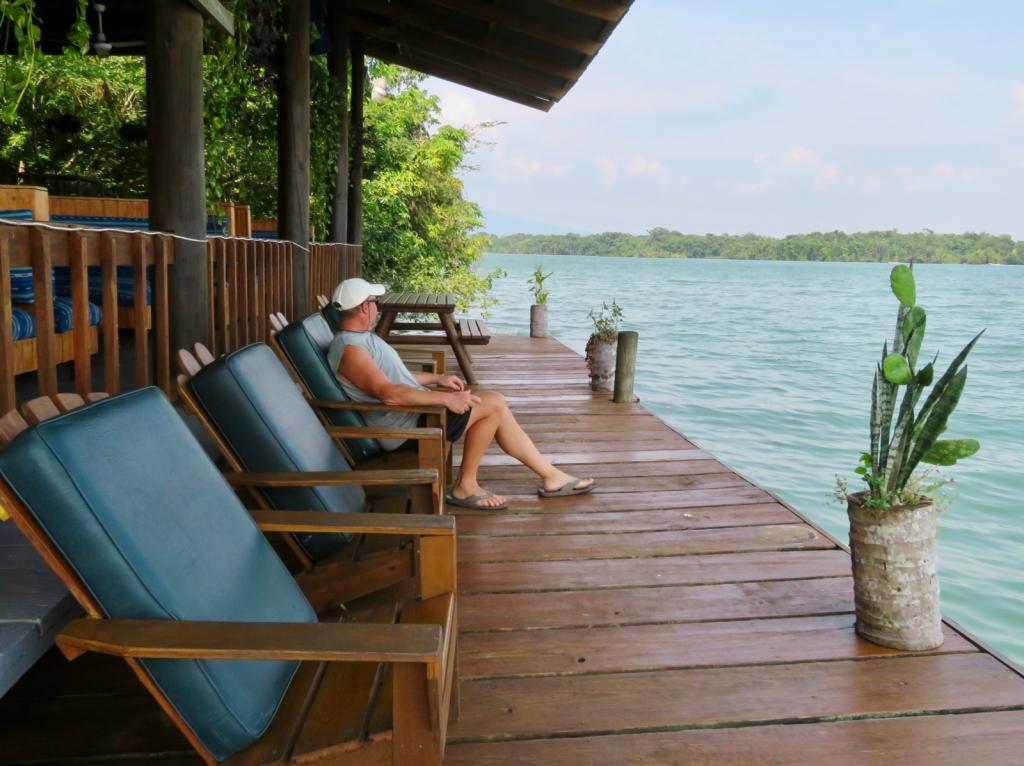 Ahh, we felt like we were home. And there's no better feeling, is there? 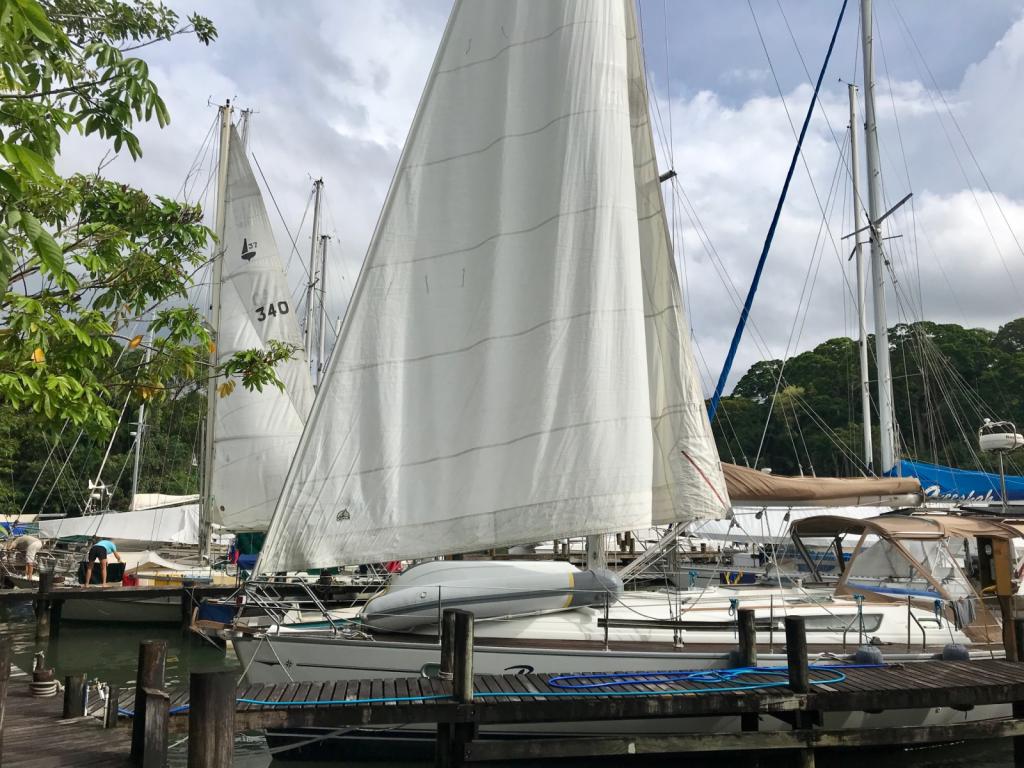 doing what needs doing when preparing our home for our absence, prepping the boat for storage, and all of it in insufferable, hot, humid heat.

The saving grace? Late afternoons were spent at the pool with homemade limonatas, think a refreshing summery drink made of lemon/lime/honey {{ frozen, por favour}}, It sure didn't help that Dave caught some sort of bug that had him exhausted and weak for a few days. Not to be outdone, I also caught something that had me completely out of commission and bedridden for the next two. The dreaded Tourista? Food Poisoning? Dehydration?

We'd planned for everything, except for getting sick! Which Sucked. Thank Goodness for Great Friends who stepped in, and kindly and generously offered their help with things we'd forgotten to do {{ sigh }}.

And that's how we left one Home and headed for another. It all started in the morning with a 4 hour cab ride from Catamaran Marina (Guatemala) to San Pedro Sula Airport, Honduras. 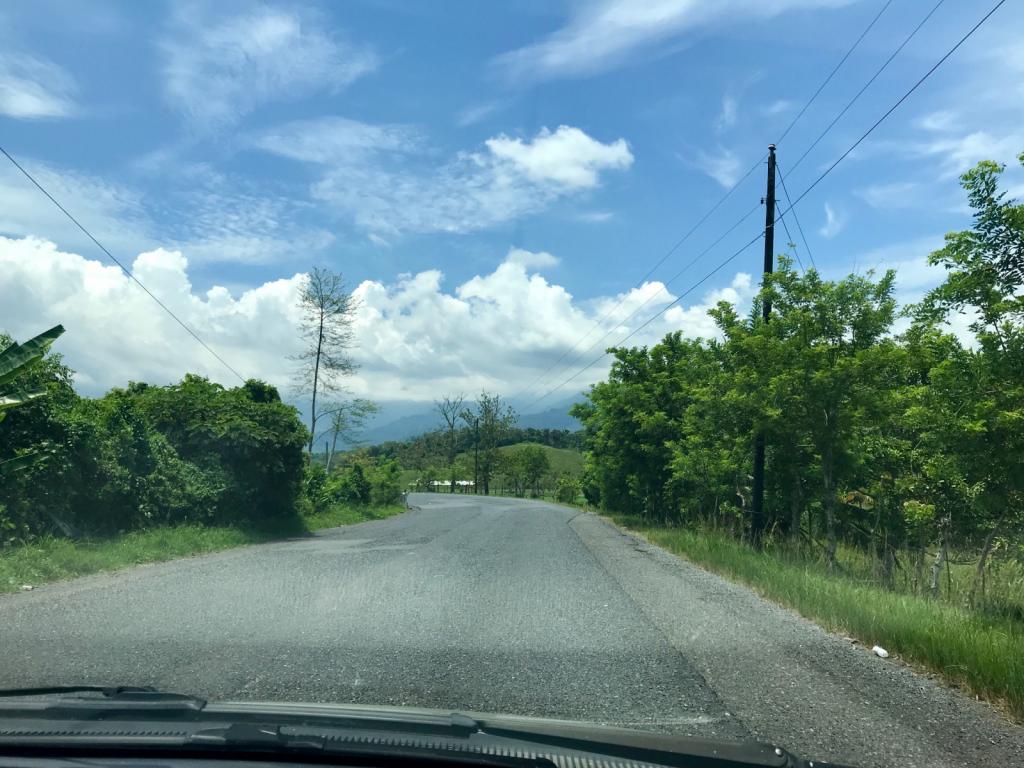 The coordination of timing of our cab ride to the airport and our midnight flight needed to consider that our cab driver needed 4 hours to get us there, and then get back before the Honduran/Guatemalan border shut down for the night. We used Otitours, and were extremely thrilled with the service!

We were picked up at 09:30, enjoyed a couple of hours of a nice air conditioned drive, and then stopped at the border, a busy chaotic set of buildings lodged between the two lanes of road, where we felt we were in a Customs & Immigration Drive Thru.

Go to the first window, where we checked out of Guatemala. Then to the next window right beside the first one, where we checked into Honduras, not without first paying the fee and being fingerprinted. Back into the car and we made it to the airport a mere two hours later, with only a few military checkpoints along the way, the uniformed and armed military men walked around the car, looked through the window at us, we smiled, and they waved us on.

We got dropped off at the airport four hours after we'd left that morning, paid our driver who quickly drove away for the long drive back. We grabbed our bags and went through the doors, entering what felt like a very large freezer, 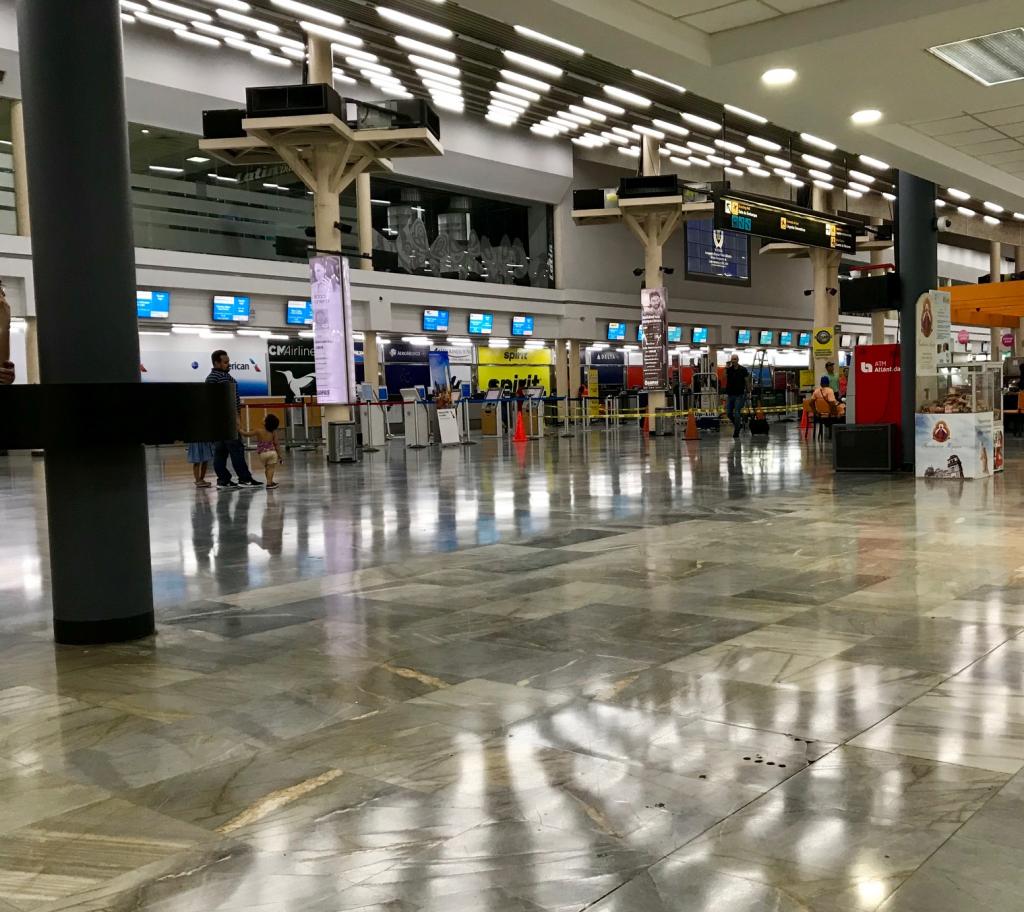 so much so I needed to find my sweatshirt. And socks. Thankfully I packed them near the top of the well packed suitcase.

How do you spend 12 hours in the airport? Eating some Wendy's? Sitting around in the dimly lit generator type of darkness when the power went out, a result of a Torrential Downpour and Thunderstorm happening Outside. Playing a Five Crowns tournament.

Our flight was wth Spirit Airlines {{ a budget airline with cheap flights to Ft Lauderdale, but buyer beware, ensure you read the fine print, or you'll end up paying for a few extras you might not have budgeted for.}} We had paid for two checked suitcases, were relieved to see they weighed in at less than 40 pounds each {{ phew }}, and triple measured the dimensions of our carry-on "just in case".

Our flight left on time, and thanks to the extra dollars we'd splurged for our Big Comfy Seats, we were able to nab a few winks of shuteye, 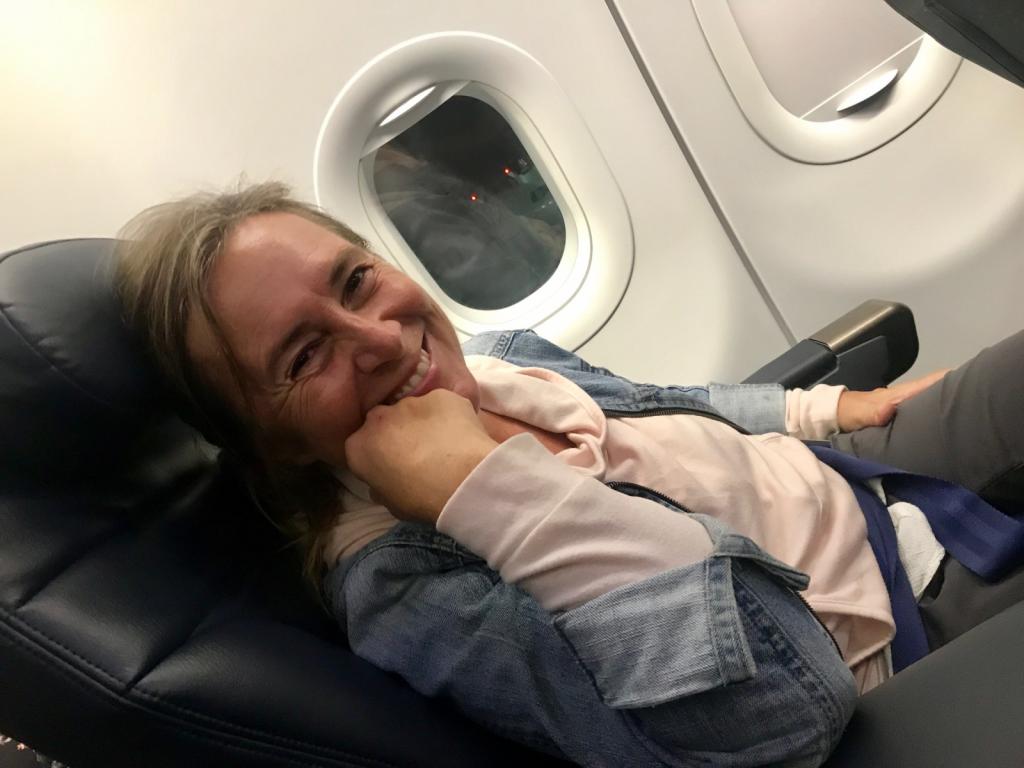 before we arrived in Ft Lauderdale 2 1/2 hours later, {{ add an extra 2 hours of time zone crossings }}, so our iPhone clicked in at 4 1/2 hours after we'd left Honduras. The Flight Capt'N's voice loudspeakered on informing us that the Good News was that we'd arrived 30 minutes earlier that our scheduled arrived time, and the Bad News was that we couldn't disembark for most of that time because the Customs Officers hadn't arrived yet.

The United States allowed us entry after standing in line for some time, and we made our way to the Car Rental building, which wasn't open either. The nearby Starbucks kiosk was, and the fumes of Java helped us patient our half hour wait. The jetlag might've fuzzied our brains into considering an upgrade of our rental car to this, but the better sense {{ or was it the caffeine? }} prevailed.

Our first stop was to visit JT, our Spectra WaterMaker guru to exchange a defective part, and then we were on our way to Premier Boat and RV Storage, St Augustine, to reunite with MoHo, who had been patiently waiting all these months for us. We found her in just as good a condition as we'd left her and once Dave reconnected the battery, she purred to life, with all systems functioning.

Dropped our rental car off, ran a few errands, and then our scenery instantly changed to this, as our six wheels hit the road, heading for Home. Home being Northwards, to where our hearts live, spending some much needed, but not enough time with two of our three kids. And even fortuitously met up with some loved and cherished friends along the way. FUN times.

And then we had to leave. Why? Because we're on an Adventure of a Totally Different Kind this summer.

We've headed to a place famous for red sandy beaches and red soils. For Potatoes {{great, just as we're thinking of going low-carb!}} For being the "Birthplace of Confederation". For the longest bridge in the world over ice covered waters {{ after the intense humid Guatemalan Heat the cool temperatures are a nice change, however, we're really not looking for any ice in our future! }} For 270 kilometres of the Confederation Trail {{ just how many of those can we walk, bike, or jog?}}. For 800 kilometres of beaches {{ just how many of those can we dip our toes into? }}. And for Anne of Green Gables, a novel written by Lucy Maud Montgomery, published in 1908 {{maybe it's time to read it again? }} which is coincidentally found right next door to our new digs.

We've headed to The Island: Prince Edward Island! To spend some time here: "Kindred spirits are not so scarce as I used to think. It's splendid to find out there are so many of them in the world." L.M. Montgomery, Anne of Green Gables

A new Adventure. A new Home for awhile. Stay tuned fellow friends and readers {{ y'all are our Kindred Spirits }} and we can't wait to tell all ya'll about the fun adventures we're going to have.