Toward luxury in Gorge Harbour Resort (back-dated from 09/23) 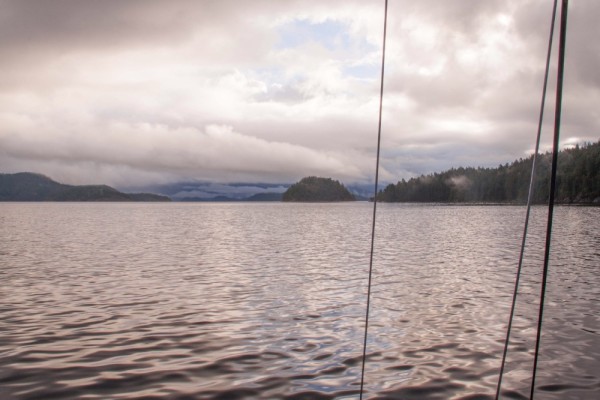 I departed Refuge Cove under the gunmetal cover of rain, but arrived in Gorge Harbour under only cloudy skies on the dying gasps of a southerly breeze. Sheltered from intermittent drizzle under the dodger, I passed several picturesque hours with morning mists fleeing the forested islands in shredded wisps and distant grey archipelagos coming and going through shifting banks of cloud.

My course led me along the northern shore of Kinghorn Island where Vancouver anchored his vessel, Discovery, while he and his crew explored and charted the reaches of Desolation Sound. Just off Mary Point, a little further on, I was distracted into a slight detour by the distant silhouette of a wayward tree that had been uprooted and left stranded, apparently teetering on one of the rocks that fringed the Powell Islets. After weaving my way inside the northernmost of the Twin Islands, I rounded Sutil Point at the southernmost tip of Cortes Island to find ominous clouds encroaching from the south. Though I cranked the engine to carry me at top speed toward shelter, the threat came to nothing. Instead I could see evidence of a modest, but consistent breeze that spanned the waters between Mabrouka and her day's destination, so I set the gennaker for a gentle reach northward.

While I navigate the rocky shores and often narrow passes with increasing, though wary confidence, events arise to remind me that dangers do indeed lurk in these waters. As I hauled the gennaker down out of a feeble breeze that had all but died, I noticed another sailboat a mile or so away whose bare mast and waterline looked to be at awkward angles that indicated something might be amiss. With my sail down and my engine propelling me calmly toward harbor, the changing aspect of the distant boat alternately made me less and more concerned, but just a few hundred yards short of safe harbor, it became definitively obvious that some poor soul had perched his boat on a rock.

I turned back to sea and, with urgency that I hadn't committed to 'til then, headed toward them to see if I could render assistance. As I got closer, I could see even more of their exposed hull, but also the activity of a good sized motor launch that was maneuvering a towing line ashore. My binoculars allowed me to read the name on the stern (which shall remain undisclosed to save embarrassment for the owners) and I was tempted to hail them on the VHF, but they seemed well and truly occupied and I chose instead just to stand by and observe. If they needed my help, they could call me or jump up and down waving their arms.

It wasn't long before they had the boat free of its distressingly exposed position on top of the rock to floating sedately beside it. I watched a while longer to assure myself that there was no evidence of panic on deck and, when this unnamed vessel motored out of sight around the corner, I turned and headed back toward and through the entrance to Gorge Harbour.

Savoring this experience as a cautionary tale to relate in this blog, I got tied up at the resort and prepared to head up to pay my respects (and my fees) to the management for a night's power and moorage. Two steps down the dock, I saw that the once stranded sailboat was itself pulling in across the dock from me, so I turned back to give them that welcoming hand I had so missed in Refuge Cove.

Having been grounded myself more than once (though never on something so unforgiving as an actual rock), it was with some sympathy that I voiced my recognition of their escape. They graciously accepted my commiseration and were open in explaining that it had been the result of an overconfident attempt to survey the little out-islands at close hand. One of the co-owners of the boat was considering buying the islands and thought he could guide the boat in for a closer look. No serious harm was done, though, so they tucked the event into their bag of experience and came on into the resort for some now necessary R&R.

Gorge Harbour Resort is a very nice facility, though their pride is definitely reflected in their rates. Well trimmed gardens around buildings that have shiny bits in all the right places offer all the benefits mentioned in yesterday's post plus a well, if somewhat exotically stocked store, a swimming pool, and what purports to be a fine restaurant.
Comments
Newer Older
Contents