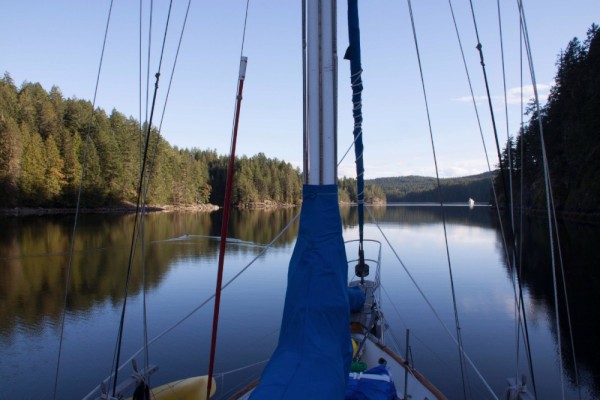 I slipped Mabrouka's moorings in time for the requisite 1pm departure from Gorge Harbour Resort and meandered across the bay past Bee Islets and out the narrow entrance pass. Taking the eastern side of the rocky Guide Islets that stand guard just outside, I set a course that curved further eastward toward Manson's Landing and my grocery shopping errand. There was a slight breeze and a low, grey ceiling that continued to offer the threats of rain it had been making good on with intensity for the last day or so. Jim and Marcia, my new acquaintances from the resort, had departed ahead of me heading for Manson's as well, so I looked for their boat as I approached the ramshackle public dock. When I saw them heading up from the south, I recalled that Jim had wanted to try his hand at fishing. Thinking that I might be thwarting their plans for mooring over night by scarfing up the last spot, I hovered 50 yards off awaiting their arrival so that we could drift in consult before I made my way in. Jim said they'd be safe on the shallower shoreward side of the dock and offered to tie up quickly, then help me wedge Mabrouka into the one remaining, but tight slot on the outside.

They dissappeared around the end of the dock and behind a screen of other boats, announcing with a telltale clatter that the barbecue mounted outside their starboard rail had met with some minor calamity on their approach, but it was only a few minutes before they were otherwise safely secured and standing ready to receive my lines.

What I'd thought would be enough space between a large, unkempt ketch and a smaller, blue cutter turned out to be adequate only by snugging Mabrouka's bow in so that her sprit was tucked inside the ketch's stern and my dink hung on its davits outside the cutter's bow. We couldn't pull Mabrouka far enough forward for me to access the dock via the lifeline opening a little aft of amidships, so I clambered over the lifeline forward toting a backpack stuffed with cloth grocery bags. Jim and Marcia decided to walk up to the co-op with me for grocery shopping of their own and we climbed the ramp together.

At the top of the dock we were gently confronted by a trio of travelers toting roll-away luggage down to the dock, apparently anticipating pick-up by a local water taxi. The one that seemed to be in charge reminded us that the spot I'd tied up in was for pick-up and drop-off only. The yellow stripe emblazoned with "15 Minute Mooring Only" had been hard for me to miss and relatively easy for me to ignore, but the man seemed satisfied when we acknowledged his advice and swore we were only going up for a quick grocery run. In any case, the float plane spot at the end of the dock was clear and provided more than adequate access for the taxi. Jim, who claimed the advantage of local knowledge gleaned from friends on the island, tried to settle my conscience by claiming that this unofficial dock marshall was only suffering from an inflated sense of self-importance, but it was still with some measure of residual guilt that we set a brisk pace for our mission to the co-op.

Arriving at the top of the hill, I learned that the bustling metropolis of Manson's Landing boasted not only a co-op, but a grocery story as well. Burdened with images of high-priced organic produce, I told my friends I'd opt for the grocery store. Even though I checked out the co-op afterwards just to be sure, grocery shopping on Cortes Island proved to be a dissappointment. Don't think it was only that the stock was dominated by unfamiliar brands. I am fully aware that that's something a foreigner such as myself just needs to get the heck over. Rather, the grocery was a small place that just couldn't accomplish everything it was attempting without enough space to do so. It just isn't possible to offer liquor, hardware, meat, fresh vegetables, and DVDs for rent, not to mention a satisfactory array of staples in the space of a mini-mart. They did have one steak, a nice looking ribeye, but I was put off by the $15 price tag. There was no cereal to be had that I could see and apparently parmesan cheese is not on the local diet. Anyway, I gathered up enough to subsist on for another week or so, and stowed it in my backpack (the extra grocery bags being all but superfluous) while the checker rang up the bill. I did treat myself, as is my wont, to an icecream bar and all was right with the world!

With a backpackful of groceries and a dozen eggs in one grocery bag, I strode with minor urgency back to the dock to free its loading zone of Mabrouka's overstaying presence. Jim and Marcia came along soon after, so they, along with their friend, John, ensured I got cast off without mishap. With a wave farewell to new friends I might never see again, I headed northwest to negotiate Shark Spit.

The southwest side of Cortes Island is turned into a semi-colon by Marina Island, the northern tip of which stretches a fin of sandy shoal upward to within a hundred yards or so of its larger neighbor. The passage is well marked with a red and white pillar that stands on a rocky jut from Cortes and two black and green buoys marking the spit. Charts show sufficient depths for Mabrouka, even at low water, but only if I properly managed a jog here and a jig there. Success, and Mabrouka could put another notch on her stick counting narrow, shallow passages under her keel. We were soon fully powered up and heading around the west side of the island, only having to give way briefly to a BC ferry that had ducked quickly into and out of Whaletown Bay to service the local residents.

I wanted to spend another week or so exploring Desolation Sound and its environs, but hadn't selected my next destination. Keeping one eye on the waters ahead and another on my Dreamspeaker guide, I quickly read up on anchorages within a couple of hours' run. Von Donop attracted my attention with its long, narrow reach three miles southeastward, slashing two-thirds of the way through the northern half of Cortes Island. It harbored cascading tidal rapids and, among larger bays, many nooks and crannies to drop anchor in. So, with the genny set to catch the assistance of a light easterly breeze that was being encouraged by a sluggish afternoon sun, I motor-sailed up Plunger Passage between Cortes and the Subtle Islands, foresaking Coulter, Carrington, and Quartz Bays for Von Donop Inlet some six nautical miles northeast up Sutil Channel

The deceptive shorelines of Desolation Sound had baffled me before. Approaching Roscoe Bay, the course I had plotted seemed to want me to dash Mabrouka against the rocky cliffs right up until the last few hundred yards when the entrance finally revealed itself. Assisted by my oblique angle of approach, Von Donop was doing the same. Once again the charts proved themselves right when a deepening cleft in the steep shore unveiled a notch of sky as I faithfully turned southeast at the appropriate location and headed into the narrow defile. Three-quarters of a mile in, the chart showed a mid-channel rock that demanded I keep close to the bouldered right-hand shore through a shallow, but adquate passage. Then the inlet opened up wider and deeper for the remainder of the way to its head some two miles further on. The southernmost anchorage offered a trail to Squirrel Bay on the far side of the island, so that's where I dropped a 6 pm anchor into quiet waters with only one other boat in sight.

Though I'd anticipated that steep-sided inlet walls would steal it from me early, there were only moderate hills to the west of me and the evening light held sway until after seven. While dinner heated on the stove, I stood on deck and sipped my sun-downer, enjoying the reflections of wooded shores and darkening skies on the calm bay. I'd skipped lunch, and wolfed down a previous night's spaghetti and carrots over a couple more chapters of The Curve of Time. The cold afternoon had put a chill in my bones, so I decided I would revel in a hot shower before climbing into bed for some more reading. Night was closing in and the attraction of a warm bed was irresistable. Cap Blanchet's stories didn't keep me awake for long.
Comments
Newer Older
Contents