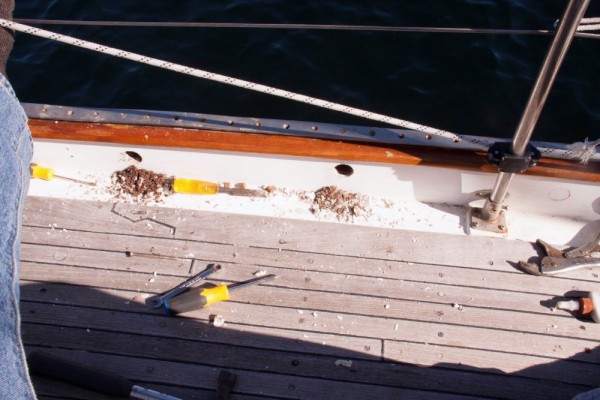 Today has been primarily a project day. A short section of Mabrouka's port side genoa car track has been lifting up, not surprisingly right under the genoa car. This is NOT a good thing. Left unattended, it is very plausible that the load from the sail could, starting at that weak spot, cause the whole thing to zip itself right up and off the boat, flinging screws and heavy genoa cars every which way. Some of those which-ways could hurt, ...alot. My intent was to try to avoid that situation.

I was surprised to see when I got up that my some-time neighbors on VortiSeas and Seascape already weighing anchor, even though the morning mists were still clinging to the trees and had to be wiped off their dodger windows with a towel. This must be a tough bunch with such an early start after their boisterous evening. Well, more power to them, ...except they're in sailboats. Oh, what the hell.

The day was brightening up, though, and before I got into my project I decided to make a dinghy run to the nearby town of Squirrel Cove just to see what there was to see. Apparently, though, most of their commercial interests shut down with the beginning of September, so all to be seen was their general store and a somewhat over-zealous information kiosk on the local shellfish industry. I bought a few groceries and inquired after the nearest holding tank pumpout. Contrary to what one might think, since every notice board at every public building in every little port around here exhorts us yachters to use our holding tanks and NOT pollute their waters, there are none to be had north of Lund, more than ten miles south on the west side of the Malispina Peninsula. It just seems odd. With just little ol' me aboard Mabrouka, I can go (literally) for a week, maybe two before my holding tank is full. Most people cruise as couples at least, often with six or eight people on their boats, spending week or more in Desolation Sound. Wouldn't it make sense for the authorities that are charged with issuing and enforcing the edicts for proper waste disposal to provide a pump-out site somewhere in the area? Anyway, ...those are the thoughts that the town of Squirrel Cove inspired.

My plan for repairing the genoa track was put into action when I returned. I had to remove all the screws holding it down so that I could lift up the track far enough to get to the wood under the damaged section. I'd hoped I would just have to drill out and plug that one spot, resetting the screw. No such luck. First of all, several screws were a little cantankerous about coming out in the first place. Some good old fashioned, heavy duty persuasion overcame all their various arguments and I successfully drilled and plugged the defective location. Oh, oh. Putting it back together again, I found other screws that didn't seem to be biting into the wood.

If you look at the picture above, you'll see some big one-inch holes in the inside of the bulwark. Every fourth screw is actually a machine screw, not a wood screw, i.e. it's made to thread into a nut, not the wood. The location and shape of the holes I had to dig out had made me think that the builders had embedded a round bar or pipe that had been drilled and threaded to suit the machine screws, then set crossways into the hole into the bulwark. Maybe you know, like the little bits Ikea gives you to assemble that Swedish-slick, do-it-yourself furniture. Nope. Mabrouka's Chinese craftsmen had just used that big hole to put a little nut on the end of the screw, then plugged it up with epoxy. The nut was no longer being gripped by the damp, rotting wood and wouldn't hold on when the machine screws were retightened. All I could do was scrape out the soft stuff, then add a washer to distribute the load, and hold the nut with an open-end wrench while I reset the scrrew. Presto: temporary fix. I'm sure it will hold for the time being, but I have a bigger project ahead to complete the job.

Afterwards I rewarded myself for a job well done with a beer and a snooze in the afternoon sun.

That's all for today's actual events. Shocking, I know. I seem to ramble on so. But there was one tidbit I left out yesterday, thinking I'd probably already worn any readers I had left plum out, so I'll wrap up with that today. I do go on and on about petty things. Spider webs, for instance. Ranting about how they probably have all sorts of scraps left on them from spider dinners. Complaining about having to disrupt my idyllic walks through the woods to wipe them off my face. Well, another thing is that I just can't seem to keep them off my boat. Even if I've succeeded in sweeping off all the actual webs, a constant campaign, they still cling to the rigging and fittings in long streamers, shimmering in the sun. I waiver between inspired patrols around the boat to brush them away and lazy resignation to the uselessness of the effort.

Yesterday I was just sitting at the helm, glaring at the webs flailing from Mabrouka's shrouds, while I tended faithfully to my steering duties and grumbled about all the injustices of the natural world. Then I stumbled on an epiphany. Motoring down Lewis Channel, I had been gazing up at the silhouette the afternoon sun was making of the ridge along the east side of Cortes Island, when I saw those very same streamers drifting solo on the wind. The damned things are EVERYwhere. I could see them a hundred feet up. I could see them in clumps. Big ones. Little ones. Are they actually evidence of the balloon spiders I'd heard of, or do spiders just spew random test strands of web into the air, like a spray painter testing his spray gun. Pffft, pffffffffft!

Perhaps you're thinking I've lost it, that I've gone and developed web-o-phobia. On the contrary. The strands floating on the breeze were really quite pretty, drifting golden streaks of corporeal sunlight. I think that, instead of fighting the obvious inevitability of it all, I'll treat them like ribbons, ...Mabrouka's awards for her freedom on the high seas, festooning her mast and rigging for all to see. There. How about that for a rationalization? I'm so proud! (PS - Let it be known among the spiders of the world that their webs are STILL not welcome on my boat and will be destroyed without pity!)
Comments
Newer Older
Contents