Finally, back across the Straits of Georgia

Getting up and about in the morning, I put on rain gear, grabbed my camera, and headed out in the dinghy for a photo tour and to stop by the Safari Quest to check on their plans. It was raining pretty steadily and I thought their clients might not be up for the discomfort of hiking through mud and damp forest. They were loading up the shore boats as I approach though, so the game was obviously still on. I floated nearby for a few minutes, chatting with Ian and their captain, and promised to meet them ashore. 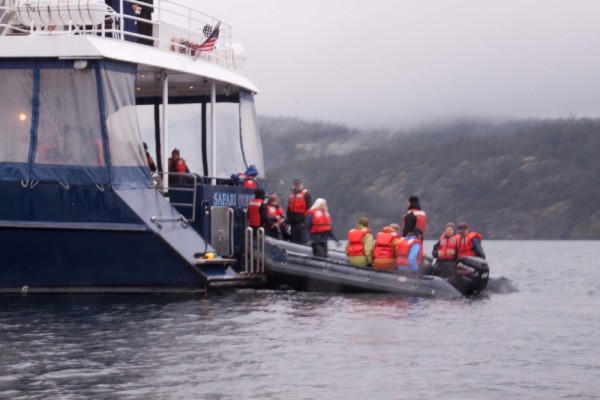 Jedediah Island is an interesting place, with homesteading history that dates back to the late 1800s and First Nations history that, of course, goes long before that. It is known for a population of wild goats and sheep that are thought to have been left originally by early western explorers as self-sustaining supplies of fresh meat for their crews. There are still remains of the house that the island's most recent residents left behind when it became a Provincial Marine Park in the 1990s. The island was purchased using funds from the Dan Culver Follow Your Dreams Foundation. You'll find a stirring plaque dedicated to Dan Culver on the rocky point in front of the old house. It describes a life of adventure that ended descending the slopes of K2 in 1993. 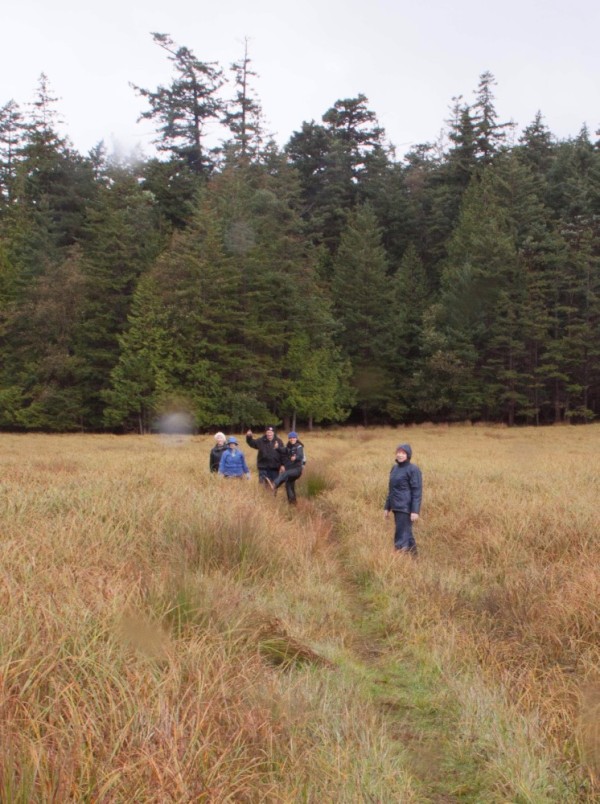 It was fun tagging along with the Safari Quest's tour groups. The guides were the youngest of the bunch, with the clientele made of of "adventurers" that, I'm sure, averaged at least several years older than I. I have to say that I was entertained by these intrepid souls who were, most of them anyway, concerned about getting their shoes and pants wet trudging across the marshy flats, but they were all nice people and I had a good time sharing with them. Still, Nanaimo was calling and I left them meandering along the trail back to get myself out to Mabrouka and the anchor hoisted to continue on my own adventure. 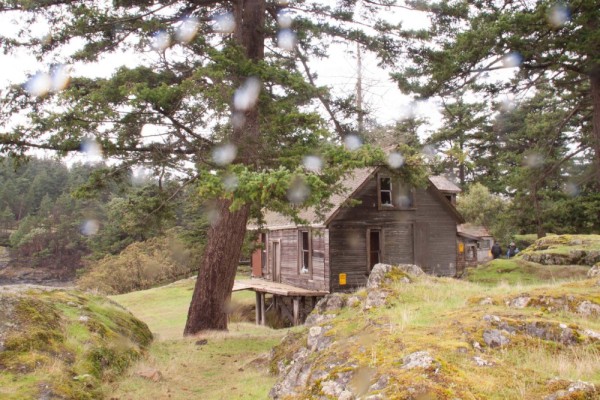 I suppose it was something after noon when I had Mabrouka's bow pointing out of Bullock Passage and into the Straits of Georgia. Disappointingly, the seas had not abated much, even though the winds had been predicted to drop markedly by the afternoon. As on the day before, the occasional wave sent water sloshing down the deck, but this time a few times it became even more dramatic. Once even brought enough water aboard that it ended up draining out through the footwell around my helm station. The only indication that Mabrouka was at all disturbed by this was her even slower pace than yesterday's until, her bow leaping up over one wave and diving into the next, her engine began to stall. With a sickening feeling in the pit of my stomach, I watched the tachometer needle dip, rise, dip, and then drop to zero. The engine had quit.

Taking a few seconds to quell my brief urge to panic, I unfurled the genny and, without broaching in the steep waves, managed to get Mabrouka turned back downwind and headed back in through Bullock Passage and the shelter of the islands. The relatively easy down wind, down swell run to safety made it seem almost cowardly to head back in, but to single-hand Mabrouka engine-less in such conditions seemed foolish to me, so discretion won the day. On the way in I pondered how I would manage to get anchored up with no motor. Ideally one of the several bays in the lee of the islands would allow me to sail up into the wind, drop the hook, and drift back onto a secure anchor out of the wind. Scoping out the situation as I reached with only the genny up into the lee of Bull Island, I noted that the wind was being funneled around so that it blew only into all the suitable anchorages. Boho Bay offered the most down wind working room, though, so that's where headed. I furled up the genny and hung the anchor off the bow with about 75 feet of chain out. Abandoning my fate to a wind that blew me into shallowing water, the hook began to catch at about 50 feet depth and it pulled the bow into the wind, so I let out more chain, ending up with a nice secure feeling with about 225 feet of chain out and the lee shore a good hundred yards away. Ah. Time to breathe normally again.

I had a pretty good idea what my engine problem was and it wasn't long before I'd confirmed that it was based in my own neglect, ...I hadn't changed my fuel filter in a long, long time. Surely pounding through waves had aggravated the problem by stirring up sludge in the bottom of my fuel tanks, but the filter was clogged and had starved the engine of fuel. That's an easy fix, though, since I had a spare filter aboard and it only took me about an hour to swap the filters, bleed the system, and get the engine running again. After some nice, calming comfort food for lunch (a grilled cheese sandwich and a hot bowl of beef and barley soup), I hoisted the anchor and set off again.

Nanaimo was still in my sights as, nosing out of Bullock Passage once again, I found the seas and wind much decreased. Another boon was in store, since area Whiskey-Golf was no longer active. Whiskey-Golf is a zone of about 50 or 60 square miles that spans half the Straits of Georgia just northeast of Nanaimo and is a damned inconvenience for making the transit with a northerly wind. It is reserved for naval exercises and, when in use, is prohibited for passage of non-military vessels. Closures are announced via the Canadian Coast Guard's continuous marine broadcast and, according to previous broadcasts, it had indeed been closed that day. It would have been a very uncomfortable passage to sail around it, since it would have involved sailing beam-to these treacherous waves. I checked in by radio with Winchelsea Control, though, and was pleased to find that exercises announced for the day had completed and I could proceed directly to Nanaimo. That was a difference of a good 15 or 20 miles, so I was one happy camper, ...er, uh, sailor. 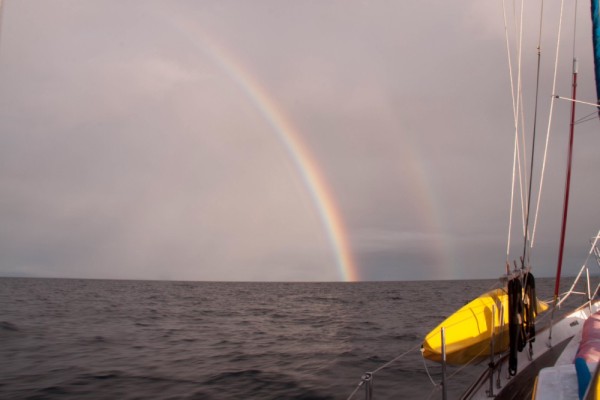 Still, it was after 8 pm and dark as pitch as I approached the islands outside Nanaimo Harbor, and I slowed down for a nervous approach. All went well, though, and I made it through the commercial harbor dotted by anchored tankers and cargo ships and criss-crossed by ferries to tie up at Nanaimo Yacht Club a little after 9 pm. It had been a long, arduous several days and I was happy to settle in, secure to a dock for the night.
Comments
Newer Older
Contents