Although I lingered in Nanaimo for a day recuperating (i.e. being lazy) and running errands, I was nurturing a growing desire to be back home. I suppose that's the most striking thing I have to say in this blog entry. Many might consider it a shortcoming of mine, but I've never really missed specific places or, I hate to say it, people. Even as a kid off at week long Boy Scout camps, I never got homesick. I don't know why that is. Goodbyes, to me, are almost always see-you-laters. There are only two instances I can remember when I had any feeling of permanent parting from someone.

The first was a complete surprise to me. It was saying goodbye to my roommate after graduating from college. Without getting into all the unique details about Webb Institute, it's only important to know that Rich and I roomed, studied, partied, and relaxed together for four full years. His parents' home was a frequent weekend retreat for me, a displaced California boy in an alien New York setting. I hope I'm not embarrassing him in saying this out loud in public, but I remember suddenly choking up as I climbed into my parents' motor home for the trek back west. He and I still keep in occasional contact and, I think he'll agree, share a special connection that is not dimmed by time or distance.

The other was in seeing my family go through the departure gate at Dhahran airport when Erika took the girls back to the US prior to our divorce. Oddly, it was seeing our black lab, Jose, in his cage going through the rubber flaps of the luggage conveyor that set me off. I think I actually cried that time. Enough said.

Over the last few days since Squirrel Cove, perhaps partially because I was being frustrated in my attempts by the weather and my wussy-ness in confronting it, I had been feeling an increasingly strong pull southward to familiar places and familiar people. The people I'd met and the adventures I'd had in Princess Louisa, Desolation Sound, and the Gulf Islands had been fun and fulfilling, but I was anxious for something I could call home, if only in the vaguest sense.

An early look out my salon windows on Friday morning was met with a curtain of grey that hovered only a few hundred yards off the dock, so I had to cool my jets a bit. The fog had lifted enough by the time I had outfitted myself with warm clothes and a hot latte, though, so it seemed a doable do to meet my 9:25 am appointment with slack water at Dodd Narrows. Mabrouka shed her bonds to the dock, only briefly accepting their restraint again at the holding tank pump out float, and we were on our way. The rest of the day after, once again, negotiating the eddies of the Narrows, could be compared to a long freeway drive home from a camping trip. I experimented with the comfort of various perches behind Mabrouka's wheel during the ten hour motor south down Trincomali Channel, through Pendrell Sound, and across Boundary Pass to Friday Harbor on San Juan Island. Mount Baker's perpetually snow-capped head greeted me early, looming above Saturna Island. Then, emerging from Navy Channel with Pendrell Sound opening before me, the distant silhouettes of the San Juan Islands lured me onward. 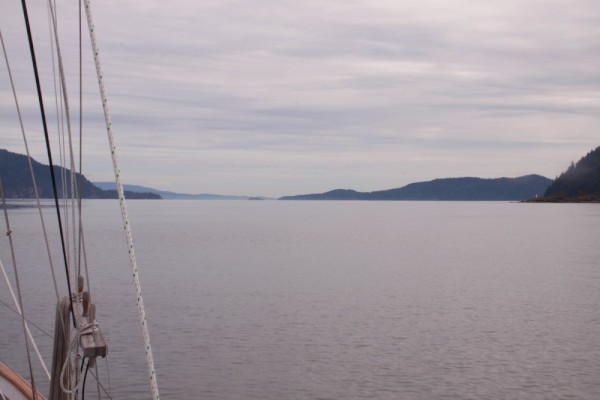 Evening was dropping over San Juan Island when I pulled up to the US Customs dock in Friday Harbor just after 6 pm. The interviews I had conducted with friends and acquaintances to prepare for this evolution turned out to be only marginally adequate. Equipped with my Canadian entry log number, my passport, and Mabrouka's documents, I stepped up to the phone box on the dock and picked up the hand set. I was actually fairly pleased with myself for most of the conversation with the customs officer who answered, although the end of the conversation left me a little worried. I'd been able to supply all the necessary information and give the right answers to his questions about fruit and booze, but I was apparently missing an all-important decal. It turns out that, since Mabrouka is over 30 feet long, I should already have paid an inspection fee and should be displaying a decal in my window attesting to that fact. I was left in a minor state of anxiety as I waited for him to walk down to Mabrouka.

When it comes down to it, Officer What's-iz-name was nice enough. I'm sure he felt he was being nicer than I deserved, but somehow his condescension made me feel a little childish, even comparing my newly acquired status of sixty-year-old to his piddly 30-something years. Why had I arrived at the dock after 6 pm if I knew the Customs Office operating hours? (Well, I thought it was just an after-hours phone thing.) Why didn't I get on-line and properly study the requirements for bringing my boat back into the US? (Well, I thought I'd gotten complete information by talking to quite a few experienced friends who'd done it many times before.) Anyway, he seemed only to want me to appreciate that he'd been working late and didn't mind (much!) helping me out after hours. He'd pre-filled out the form that would equip me with the necessary decal and all he required was my credit card number and a signature. With a promise to read the customs pamphlet he'd given me, I skulked back aboard Mabrouka and moved her over to the reciprocal dock for the night.
Comments
Newer Older
Contents