11 October 2013 | Eagle Harbor, Bainbridge Island, WA
Roy
It's Friday morning and I'm now back in Eagle Harbor. I've been fiddling with day-by-day blog entries to cover the last several days, but decided I was droning on with nothing really to say. I highly doubt that any of you are in need of daily accounts, so I won't try to relate the mundane.

Briefly, my brother and his friend, Louie, came down for breakfast Tuesday morning. That was good. I caught up somewhat with blog entries, getting Mabrouka finally down through the gales on the Straits of Georgia, south of the Gulf and San Juan Islands, and here to Gig Harbor. I visited the Harbor History Museum on Gig Harbor, ...highly recommended. Wednesday I motored across Commencement Bay to Tacoma where I took a reciprocal slip at Dock Street Marina and had dinner with a friend that evening. Yesterday, though I tried several times to sail, I ended up just motoring north and dropped anchor here in the late afternoon.

If there was any excitement to the day, it was to see one of the big Manson floating cranes wedged in between the docks at Eagle Harbor Marina, standing a giant's pose over the yachts that live there. It seemed better to stay out of their way, so I didn't go over by dinghy last night, but I did swing Mabrouka in close enough as I entered the bay to see that they had the old wooden tug, Chickamauga, being held afloat by their main hoist. I guessed she'd sunk at the dock and they were hauling her back to the surface so someone could patch up the leaks and remove the oil from her tanks.

The crane was gone by this morning, but I did putt over there to confirm my conclusion. Yup. I was right. Though still in her slip, she and some remaining debris were encircled by a floating oil boom, there was a variety of junk on deck, and her ports and doors were all open to let air circulate through her sopping interior. Her hull also seems to have suffered from the stresses of being hoisted back to the surface, with bulwarks and rub rails crushed in where the straps bore on her hull. So sad.

You can read up on the Chickamauga's storied past in this Bainbridge Review article. She'd been my neighbor at Stimson Marina and I even allowed the white bulkheads and red trim of her wheelhouse to charm me into indulging my romance with all things nautical with some early evening photographs. 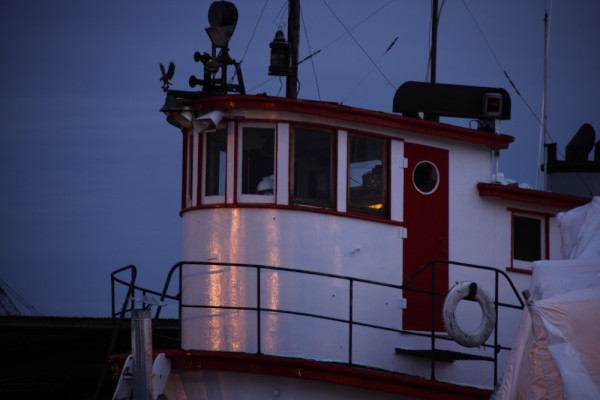 Her present state belies the cosmetic treatment she'd received and the lack of care given to this grande dame has now proven to everyone that her 100 year old wooden hull needed much more than that. I have the vague suspicion that Stimson kicked her out, so it was with some interest that I'd seen she'd moved to Eagle Harbor Marina earlier in the year. She may actually have been in the very slip I'd occupied there some years before. The article referenced above implies that her condition was misrepresented when Eagle Harbor Marina agreed to give her a slip. This incident is apparent proof that old vessels like the Chickamauga can be a liability for a marina. I wonder what her future holds. My guess is that it's very short.

I found it very chilly and have hunkered down reading aboard Mabrouka most of the day. Odd, because its still in the high fifties. Just goes to show that it's time for me to be headed south and next summer will be none too soon. Though I'd anchored out yesterday, I've since moved to the Tyee YC dock. The first thing I did after tying up and connecting the shore power was to shut the companionway and turn on the heater. I'm much happier now.
Comments
Newer Older
Contents