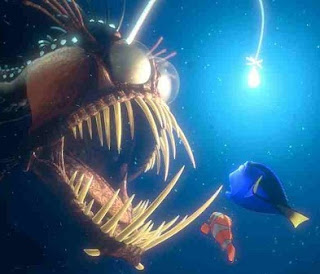 
I was at one time a technical-person-in-training but, after a brief period of supposed professional status as an actual engineer, over a few decades devolved into a project manager, then into a retired person. This has been my own way of seeking a lower level of entropy. The search for a career that actually paid a salary led me to Webb Institute where they force fed me enough temporary knowledge to propel me to the more energetic state of naval architect. In the intervening years, varying degrees of gorging and starvation now find me striving to be the artist that I really always wanted to be.

So, for those technically minded of you out there who might hope to be stunned by this description of my power system upgrade, please try to restrain your disappointment. Here goes:

Last summer's cruising emphasized a deficiency that I'd known of for years, the crux of which was that my battery bank, even with the help of two 130 watt solar panels, couldn't sustain my 110 volt power demands. It was the refrigeration system that I saw as the major culprit. I could pare down my use of the TV and the 110 volt outlets, but refrigeration seems kind of necessary. The system had been on the boat since before I'd owned it, so was well over 15 years old. I'd always thought about replacing the compressor with a more efficient 12 volt unit, but skin flint that I am, I couldn't bring myself to force it to walk the plank and settled on the coward's strategy of letting it suffer a natural death.

Then the doity bastitch went and died without telling me. Actually, I suspected, indeed secretly hoped the compressor was on it's last legs, so had gone ahead and purchased a Cool Blue unit at the Seattle Boat Show. If it hadn't been for the long, cold, blizzard-plagued Seattle winter, I'm sure I would have smelled the decaying corpse (sour milk, moldy cheese) some time ago. Fact is, it was a mild winter, but one cold enough that the food didn't turn into biology experiments at a fast enough rate for me to suspect that my refrigeration had, indeed, already deep-sixed itself. I conned a refrigeration technician to come to the boat to see if he wanted to pay me big bucks to harvest my old freon, but was embarrassed to hear that I didn't have any to harvest. None. Nada. Zilch. Oops. Oh well, I was able to cut the old refrigeration tubing away with a free conscience, if only I can get over the guilt of having maintained the system so poorly in the first place. I must own up to my share of responsibility for the hole in the ozone layer. If you're a glutton for punishment you can see my earlier post of April 11th for more.

But I've digressed and elaborated on a story that has already been told. To get back on track, ...oh, wait. One more digression, this one not so lengthy. I also bought a single-side band (SSB) radio at the boat show. I won't explain that here other than to say that it sucks up a lot of power when transmitting my wisdom and pleas for help across great expanses of ocean. The package of shiny new components included a not-so-shiny manual that attempted to instruct me in the finer points of SSB installation. One pearl of wisdom it shared was that the radio should be connected directly to the battery by a single cable with no joints and not more than about 8 to 10 feet long. With the locations available to me for the radio, THAT was SO not hap'nin', so I hit on the idea of adding a separate battery. While I was at it, I'd switch all my instruments over to be powered by that battery.

So, now back to the main saga. I'd decreased my 110 volt load by switching to 12 volt refrigeration (a more efficient one at that) and now only have my outlets and my microwave that require AC power. I also doubled my main battery bank power by adding a second 260 amp-hour battery. The new battery for the SSB, dubbed the Comm(unication)s battery since it also powers my navigation instruments and the VHF radio, provides an additional 140 amp-hours of power. 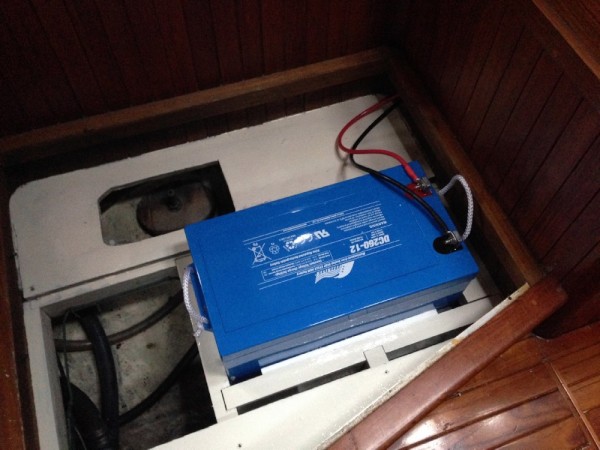 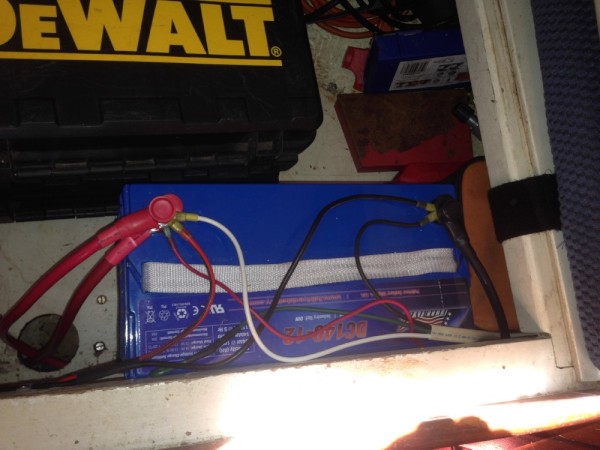 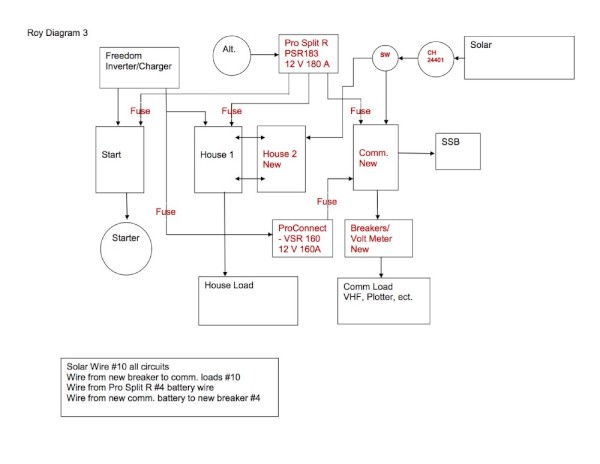 This was all well and good, but the new kids on the team had to learn to play well together, so I called in Coach Ed. Coach Ed (Ed Foster) has been helping me electronically on Mabrouka for a couple of years. I've bought solar panels, solar panel controllers, batteries, and LED light bulbs from him, but now solicited a higher level of his expertise. Ed listened to my layman's description of what I had and what I wanted, then tried to explain to me how to get there. That explanation included the cool wiring block diagram shown here, although it went through several iterations. Note a couple of boxes with red lettering (all the new stuff has red lettering) labelled Pro Split R and ProConnect. These are the ringers that Coach Ed called in as co-captains for the team of batteries. They decide who needs power when and how much. That way my various sources of electricity, the solar panels, the engine alternator, and shore power, will keep all the batteries charged at the right levels without burning anything out. There's even a solenoid (the one labelled CH 24401) that cuts out the solar panels when the engine is running. 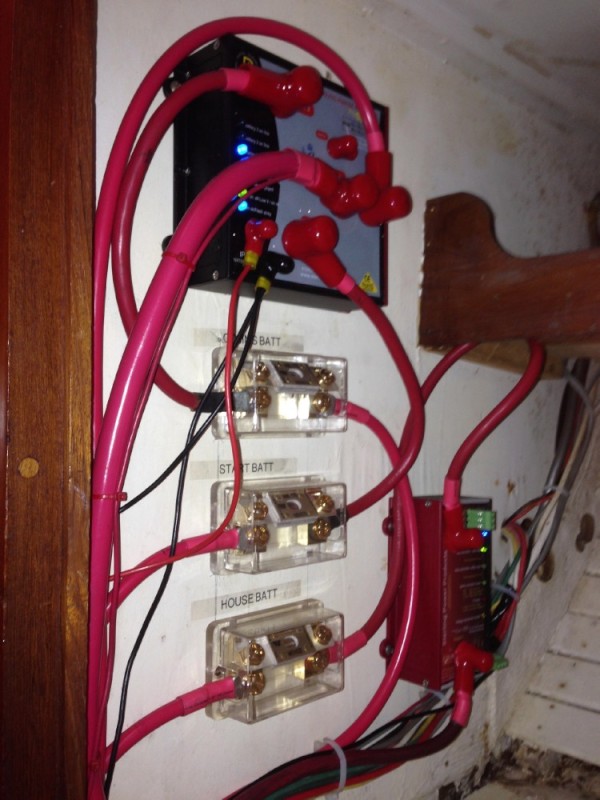 So, as with the SSB installation, I received a big pile of brightly colored stuff and had to figure out what to do with it. Well, the new batteries weren't so brightly colored, but they were heavy enough that my face made up for that when I put them in the boat. I got to cut wood up and put it back together again to make the batteries fit. I got to pull out and throw away all sorts of grungy old wires that had outlived their usefulness. I got to take all my cabinetry apart (again!) and run nice, thick red cables all over tarnation. I got to crimp lugs and electrical connectors onto a zillion wire ends using my fancy new wire strippers and crimpers. Oh joy, I even got to solder some wires! 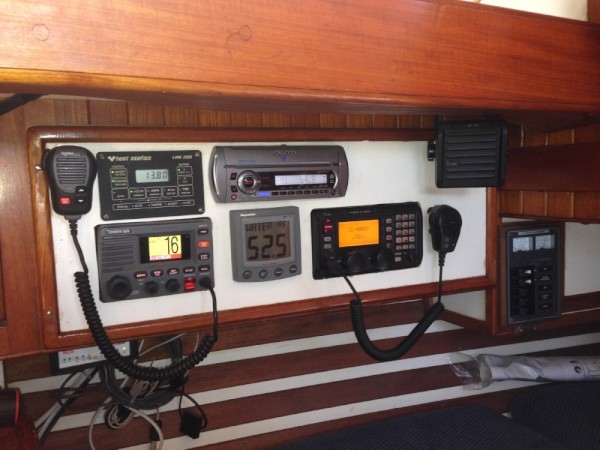 The system has now been commissioned and seems to be working fine. I only hope I have not added undue complexity, although my mission of providing a separate battery bank to support critical communications systems seems to be a worthy goal. I can look over at the cheery face of the new Comms breaker panel any time I want and I am inordinately fascinated by the flashing yellow, green, and blue lights on the Pro Split R and the ProConnect, so that makes it all worth while.
Comments
Newer Older
Contents