15 December 2014 | Ensenada des los Muertos, Mexico
Roy / Sunny and not too warm
Yes, it's finally come time to say goodbye to La Paz. After a couple of days luxuriating in Marina La Paz's facilities, we'd spent enough time washing and polishing Mabrouka, filled up her water tanks, and stocked her larders. We'd even delayed another couple of days in order to join Jared, Amanda, and Kevin for the Seahawks victory on Sunday afternoon. That gave Mitch and I some time to go walk-about and get away from the touristy malecon. 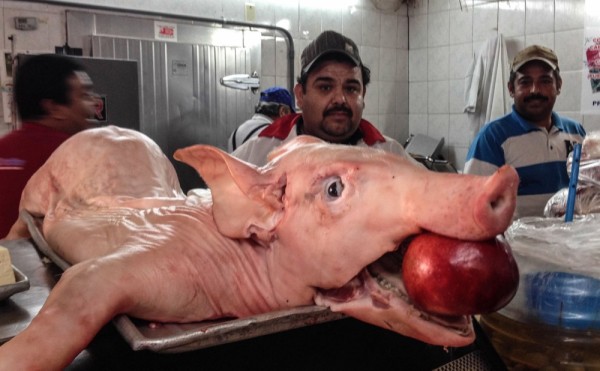 Our plan was to join Friday in departing La Paz on monday morning for Los Muertos, then jumping off for Mazatlan from there the next day. Anticipating a good eleven hour transit, we upped our anchors around 6:30 to make the long motor northward out the channel. Leaving the last buoy behind, we had enough wind from the right direction to motor sail most of the way up to Canal de San Lorenzo, then set our genny for good as we made the turn eastward. As we followed the coast past Punta Bulle and then turned south down Canal de Cerralvo, we set the gennaker for a nice long run toward Punta Arena. With a hot sun and a cool breeze, the afternoon hosted a perfect sail.

We made Ensenada de los Muertos early enough in the evening to enjoy some relaxation on the bay. Eventually we launched the dinghy and picked up Jared and Amanda for a ride ashore for drinks and dinner at the little cantina.

I'd tied my usually dependable bowline knot to the dinghy's bow line and dropped an anchor up the beach when we landed, but my heart sank when we came back after dinner and the dinghy wasn't where we'd left it. Even though we walked hopefully up the beach, it did not appear no matter how far we went into the darkness. After a minute or two we turned back to where the dinghy should have been and found only the anchor line with no knot and no dinghy at the end. Peering out into the bay, we could just see the haunting glow of its reflective tape teasing us from some hundred yards off shore.

Here's where I really appreciated the vigor of youth. Although I had to endure some chiding for my sloppy seamanship, it was only a little and Mitch quickly offered to swim out and recover the boat. I equipped him with my head lamp, not only so that he could see, but so we could track his progress and assure ourselves that he hadn't disappeared into the foam and splash of a great white snack attack. Thanks, Mitch. You risked your life for us.
Comments
Newer Older
Contents