An Introduction to Mazatlan 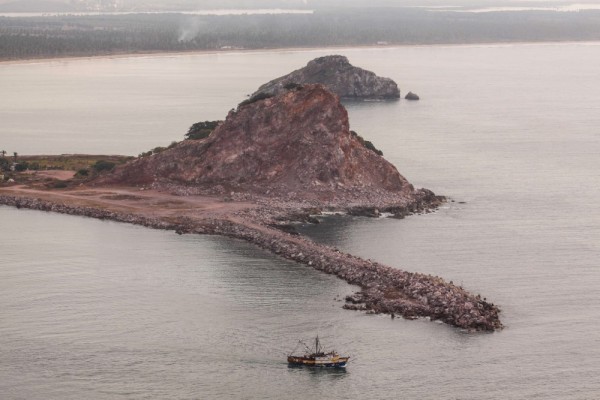 Jared and Amanda took Friday in search of more luxurious accommodations after the sun had been up for only a few hours. They're much more in the mood for city life that I am, so we stayed put on the bay behind Isla Chivas. Armed with a little bit of local knowledge from a cruiser that was departing the bay for further south, Mitch and I dinghied ashore and walked a short way into the town that we suspected was hidden behind the palapas lining the sandy shingle to the north.

The road was rutted and humped, with small outcrops of stone that jutted up through the dried red clay. Both sides were lined with roughly made concrete buildings in various degrees of construction and disrepair, but green trees and the spindly round trunks of palm trees pushed themselves up through dirt and scrub, and the dusty shadows were often brightened by bougainvillea festooned in delicate pink, red, or white flowers. Backyards cluttered with spent pangas, and half-done construction projects had sleeping dogs lying guard in the shade.

Whaling must have been a one-time industry for this town, because we saw a massive jawbone abandoned atop a plywood table and a giant's necklace of vertebrae the size of truck rims was strung from the crotch of a tree. Some of the shacks purported to be restaurants and beer joints, but it was hard to imagine anyone feeling like they were being invited into luxury and service, much less even a modicum of comfort under parched eaves of brown palm fronds scattered over spindly lattices of bamboo and branches.

We turned a corner, though, and concrete appeared. This bow to modern construction techniques sported buildings with actual doors and windows set in white-washed stucco walls. Going-concern business establishments were emblazoned with the colorful Mexican brewery art. There was an infrequent car to avoid as it trundled by and a couple of pick-up truck taxis worked purposefully down the street, its customers twisting to gaze at we two gringos from bench seats along the sides. A truck laden with fruits and vegetables kept pace with us at intervals, stopping to vend pale oranges and deep green cucumbers to patrons along the way from a scale perched on the tailgate.

Eventually we selected an establishment for our own patronage from one of the less dubious along the way and were greeted by a white-shirted gentlemen who led us through a shaded restaurant busy with empty white plastic patio tables and chairs. We chose a spot nearest the beach front side and settled in with beers and menus. Our orders were modest accompaniment for a second beer each while we fended off an intermittent parade of vendors hawking carvings, t-shirts, and woven blankets. A couple of them tugged super heroes down the beach that drifted aloft behind them from small parachutes. Batman and Spiderman, among others, could be had for, I'm sure, only a handful of pesos.

It was a scene of constant entertainment to watch the sunbathers, stretched out on chaises parked contradictorily under the shade of beach umbrellas, variously fending off or entertaining the approaches of the gnarled women and desiccated men who made their paltry living off the tourists. One man (I later learned that he'd been a frequent customer of this particular vendor) had on the order of fifteen or twenty blankets unfolded, held out for display, then set aside in a heap before he'd selected his favorite. It was a good-hearted exchange, though, and the gringo helped fold the wares while the vendor's small boy drank a coke and played in the sand beneath the umbrella.

This was the living fore-drop to a scene that encompassed a broad, tan beach constantly being pawed at by small waves arising out of a pewter bay that shimmered with bright gold sparks in the early afternoon sun. Mabrouka floated small, but regally a half-mile in the distance with Goat and Stone Islands bookending the view. A few bathers were attempting to belly board on the meager wavelets while six or eight tourists at a time were hauled out across the flat water at high speed atop inflated yellow banana rafts. A lifeguard (we were surprised to see that service here at all) motored a quad down the shore with a quiver of flag poles under his arm, planting them every hundred yards or so to warn beach goers of rip tides or stingrays or jellyfish. None of the banners offered symbols emphasizing the danger of excessive ultraviolet.

Our midday meal consumed, we stepped off the restaurant porch and out from under the palm-thatched awning to walk back along the beach toward the boat. The town was even somewhat attractive from here, turning a Mediterranean face of cool shade and cold drinks toward the waterfront instead of the dusty, parched backside it showed to the street.

Mitch and I wandered down the sloping shingle to the breakwater and out to the small cove where we'd beached the dinghy. Starting Mabrouka's engine and upping her anchor, we motored around Isla Chivas and to the other side of the breakwater to moor at Club Nautico just inside the commercial harbor. That would give us better access to Old Mazatlan, our next target of tourist opportunity.
Comments
Newer Older
Contents