Anchorage off Club Nautico is not luxurious, but it is cheap and provides much better access to Old Mazatlan than the marinas up in the Golden District north of the city from where it's a 100 peso taxi ride into town. At night, when music strides around the bay from neighboring restaurants, one can almost see back in time ten or twenty years when the club's huge round arcade, sheltered beneath its broad red tiled roof and standing proudly behind a row of shiny Med-tied yachts, was only beginning its downslide from cruising Mecca-dom. I can imagine knots of Izod-shirted sailors luxuriating in the cool, Mexican evening air with pina coladas and cervesas while they swap tales of Gulf crossings.

Now there are no boats moored at the sea wall and only a couple of dinghies at a time tie up to its dilapidated float to brave the walk up the creaky, rusting gangway to the parched cement patio. The promenade is lit only by a few bare, incandescent bulbs and it must have been many years since a prize marlin has hung in the stocks in front of the club. The blue and white stuccoed walls still echo the moonlight, but the reflection is marred by failing plaster and muted by the dusty patina of years. Now fifty pesos a day gets you access to brown-tinged bathrooms and showers, a spigot for undrinkable fresh water dispensed through hoses furled in lazy coils on the pock-marked boat ramp, a corner in which to pile your trash, and a friendly local who poses as night security. 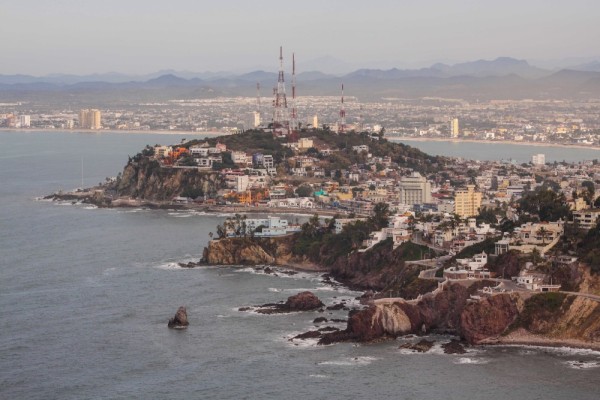 I've taken the walk and, lately, ridden my bicycle several times into the city, skirting up and around one side or the other of a rocky knob of residential area, or along the commercial wharves where the water taxis and ferries load and unload passengers from Stone Island and La Paz, then through the outer streets of town. The road on the sea side of the hill is the scenic route, topping rocky shore with a cement rail that offers jutting view points along the way. The biggest one harbors souvenir and drink vendors to help the tourists pass the warm, sunny days.

All roads from Club Nautico seem to lead into Mazatlan's historic district. I've been in most days in the week or so that I've been here and am just starting to know the area and its people. Even more than in La Paz, I think of Mexico as a country of color. The reds and yellows and greens and blues here are magnified by the bright sun, even in winter. Night time in the city is lit mostly by incandescent lights that give a golden tinge to all the edges and bolster the brown-skinned faces with a healthy tone. 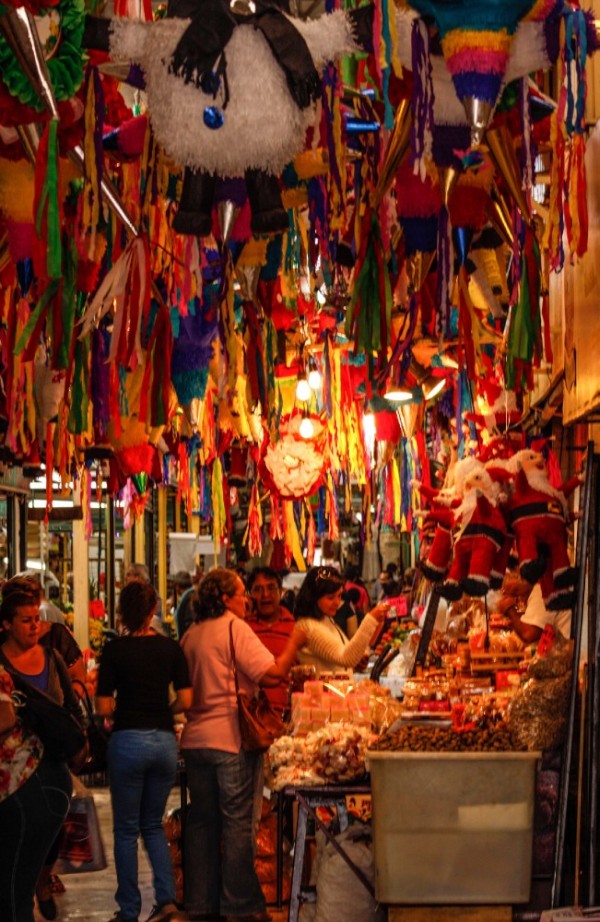 Life teems here. The streets, shops, and squares are always roiling with people, few too intent on their own business not to look up to swap a smile and an "Hola!" Though there are abundant stores displaying modern wares in cases ablaze with fluorescent light, I haven't found a supermarket here yet, just street vendors and the open air market.

A walk through the shopping district is cacophonous with music blaring from the shops, from traditional Mexican to hip-hop. If I spoke Spanish I could offer you a more definitive description, but there appears also to be a living to be made in equipping your car with a pair of roof-mounted bullhorns and blasting political or marketing messages through the canyons of buildings and homes of Old Mazatlan. 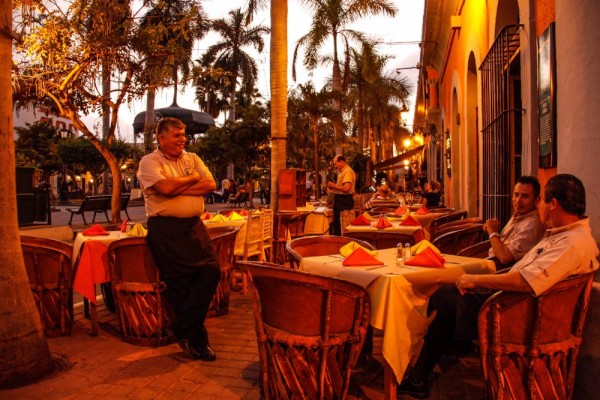 I'm not a late night person, but it seems to be true that dinner hour really doesn't start before at least seven or eight in the evening. At dusk the waiters and maitre d's are still chatting at empty tables that have been prepped for the onrush of diners and night vendors are still setting up their tables on the squares. A few people are strolling, but it's a lull between afternoon shopping and evening social hour. 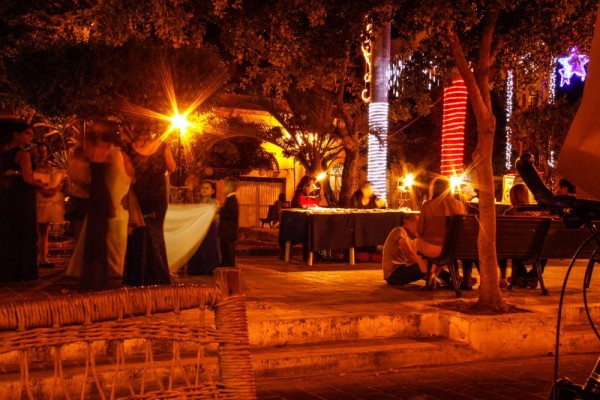 Last night I sat down at a sidewalk table outside an essentially empty square-side restaurant at seven and things were only starting to crank up around eight. The square had filled with wandering couples, at least two wedding parties spilled out from their indoor venues for photo-shoots, people shopped for nicknacks among the crafts spread across the folding tables, and benches filled up with young women chatting their evening gossip.


I've come to know Mazatlan only by her gaudy dress, but her curves, style, and poise hint at a mature, sophisticated lady who welcomes the world and offers enchantment to any who linger to spend time with her.