Visitor from the Frigid North

It's been so long since I've added to this blog that I had to go back through my most recent entries to recall what lies I've told. Thus, I discovered that I'd ignored Mitch's participation in my Old Mazatlan explorations. (Apologies, Mitch.) He did inspire several forays into town, not the least of which were his multiple attempts at becoming an actually legal tourista. The border authorities kinda skipped the visa process when he drove into Tijuana with his brother. Then, when he tried to fix the problem, they made it just too hard to correct their mistake later. The best they could do was offer to deport him so that he could come back in properly. Isn't bureaucracy a wonderful thing? So, Mitch explored with me under cover for a couple of days, then packed up his sh*t into two back packs, one HUGE, one normal and we had a fond farewell at the Club Nautico dinghy dock late one Sunday night. He was off on a southbound bus to meet friends and climb the second (?) highest peak in Mexico, then embark on a hazy plan to become a reverse wet back working on a truck farm down in Guadalajara somewhere.

On December 30th my daughter Emily would become the first state-side visitor of my cruising life. Enrique arrived early in his taxi to pick me up at the marina as promised and delivered me to the terminal in plenty of time. Unfortunately, US Air didn't do the same for Emily. I had entertainment, though, since someone else had arranged mariachi to greet their guests. It was a disappointment that Emily didn't come through while the performance was still under way. I would have liked to claim that I'd ordered them for her.

Back on Mabrouka I got Emily settled in and we set off on a week of visits to Old Mazatlan, great meals out, tourist shopping, poaching sunshine and beach-side chaise lounges at nice resort hotels in the Golden Zone, and several 10 mile, 10 peso (66 cents) bus trips along the malacon to explore down town.

Though Emily had arrived on December 30th, I hadn't made New Year's Eve plans. Fact is, I'm not much of a New Year's Eve-er, but there was a night of music and food to be had at the nearby Chill and Grill, so it didn't take much encouragement from Emily for me to book a table. I had high hopes for the music since I'd heard some really great rock-n-roll rolling across the harbor from the place on Wednesday afternoons. What we did get was a pretty good acoustic guitarist, but he was, frankly, a bit of a sleeper. Anyway, he didn't keep our attention for the four hour trip from dinner to 12 PM. Emily was more interested in the throbbing base from the techno that was imposing upon our evening from across the highway. Needless to say, we didn't make it to midnight and went back to Mabrouka for (disappointingly for Emily, I expect) a DVD. That didn't keep me going 'til midnight either. What an old fart. 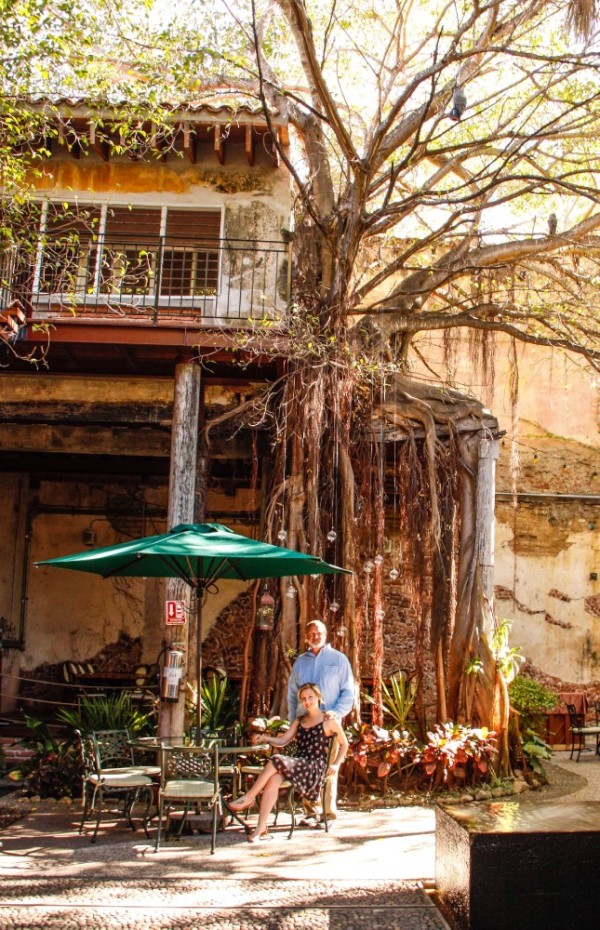 One of our nicest down town discoveries was the El Presidio restaurant a couple of blocks west of Plaza Machado. We had been browsing graffiti and street art on the exterior walls of abandoned buildings and alleys in the neighborhood west of the plaza and Emily had discovered some entertainingly inappropriate tags that she chose as a backdrop for Facebook selfies with her smart phone. I had anticipated photo-ops myself, and had lugged my Canon and a tripod along. Doorways are a common attraction for amateur photographers since they hold still for you and offer fairly static variations in color and lighting that allow the untalented to play with camera settings at their leisure. 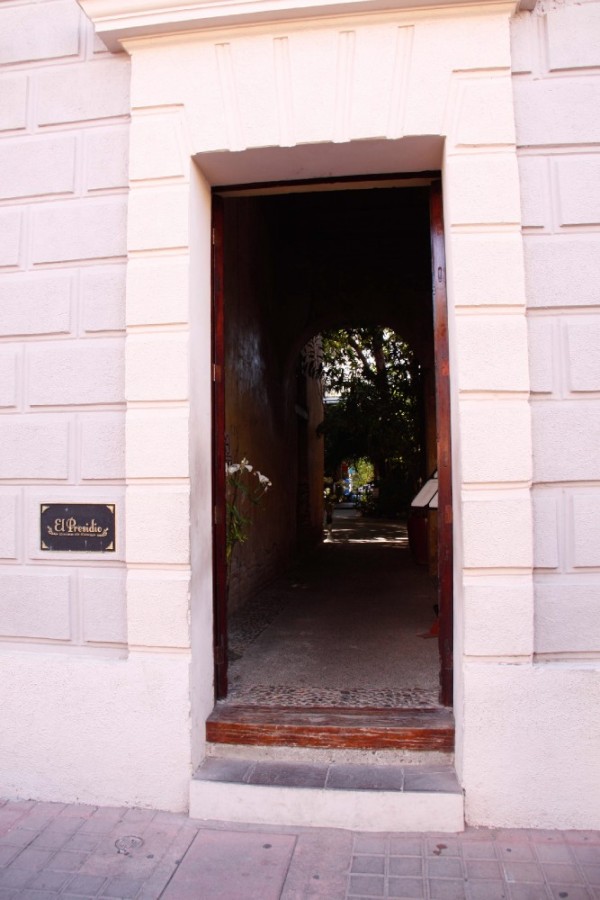 I'd found one across the street from Emily's photo shoot. It was a dark hole in a broad expanse of wall that boasted a modest burnished bronze plaque outside, giving an air of restrained elegance that contrasted with the street art only 15 yards away. After clicking away a few shots, the subtle drama of the entranceway pulled me in where I was greeted by three attractive young ladies who were stationed semi-formally in black skirts and white linen blouses beside an elaborately lettered menu displayed on an easel inside the door. One that spoke English escorted me, with my camera and tripod, down a rustic corridor and into a huge shaded, but open-roofed interior dominated by dilapidated plaster walls that were patch-worked in rough brick, with contrasting terra-cotta tiled patios and dramatic stairways that found their way up past the arching branches of the large fig trees that grew up through the ruins. The cool, shaded setting echoed enchantingly with the quiet chatter of splashing water and the whisper of leaves.

A more skilled photographer could have spent hours in photo-shoots there. It became apparent that the hostess had been trained to keep her restaurant from becoming a mere backdrop for local photographers, since she immediately informed me that I couldn't take pictures unless someone in my party was in them. The place was whispering devilishly in my ear to be photographed, so I went back outside and lured Emily in for pictures. I hadn't planned on staying to eat, but the ambiance was so enticing that we did decide to have a couple of drinks and came back a night or two later for dinner. I have since recommended El Presidio to several friends and "liked" the restaurant on Facebook. Enter "El Presidio Mazatlan" in FB's search box if you'd like to see more.

Our other favorite destination was the "old" Pueblo Bonito in the Zona de Oro just south of the marina. We'd put on our bathing suits, throw towels over our shoulders, pack reading material and suntan lotion, and walk the mile or so from the marina to the big resort hotel. I don't think we were unwanted or even unusual in "sneaking" through the lobby to the beach behind the hotel. No one questioned us as we walked past reception, around the pool, and down the seawall steps to cop a couple of chaise lounges in the sun and enjoy free entertainment throwing a borrowed Frisbee, playing in the surf, watching the other tourists, and fending off beach vendors. All we had to do was bring our own towels. In any case, we made up for our imposition by buying lunch and cocktails.

Emily and I spent a grand week together, shopping and touristing and eating out and generally lazing about, so it was sad to send her on her way.
Comments
Newer Older
Contents