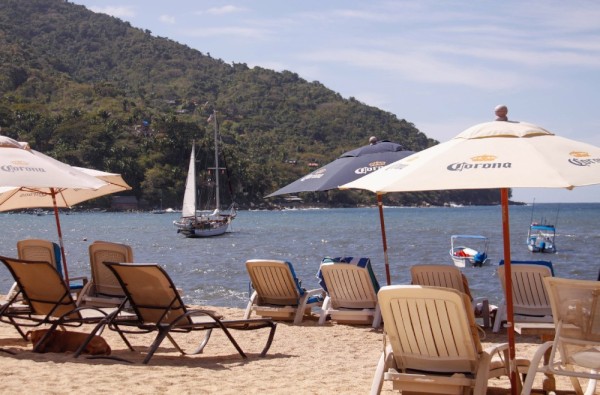 It may seem like I'm abandoning my newly minted guideline of fabricating these blog posts on a strictly topical basis, but Yelapa epitomizes a special cruising topic beyond its eminence as a cruising destination, at least for me at this point in my experience.

Even before I'd actually visited there, rumor had risen in conversation that it had been a favorite haunt of such iconic music celebrities as Steven Stills and Frank Zappa. Someone like me, uninitiated in the smokey, ethereal atmospheres of rock'n'roll stardom, can certainly imagine these notorious figures lounging lankily beneath an out-of-the-way palapa with a beer in one hand and a slender grey twirl of smoke climbing up from the brown twist of a joint in the other. At least half an hour surfing the web has failed to confirm this, although I did find one travel article whose writer vouched personal sightings of both Peter Coyote and Hilary Swank while touting Yelapa's place of idyllic prominence as among the best of primitive resort destinations.

If it lends any credence to Yelapa's status as a hideaway for the stars, I've actually graced it streets twice myself! The first time was aboard Mabrouka with the company of Kevin Rhone, and the next was on Kevin's motor yacht, Andante, with friends Amanda and Jared from Friday, my one-time crew member, Heather, and Nick Hollis who'd soon be setting sail for French Polynesia aboard our friends' boat, Apropos. Assuming this meager couple of visits were sufficient to typify the general experience, I will extrapolate to describe the thousands of Yelapa landfalls that occur by private yacht every year.

Approaching from across Banderas Bay, Yelapa's bay, though good sized, doesn't really stand out against the background mountains until you're already less than a mile out. Sidling up by tourist panga along the craggy tropical coast from Puerto Vallarta, it must come as a surprise when you round it's rocky eastern point.

Our first definite sign of Yelapa's existence was the sight of a panga bashing it's foamy way towards us through the sharp swells we'd been riding in with the northerly breeze from La Cruz. The boat's driver might be the front-line representative of any of the town's several beach-side palapa restaurants that knit the fabric of their livelihoods out of the pesos of visiting tourists, and the usual pitch offers the duty-free use of a mooring buoy and a ride ashore in exchange for exclusive restaurant patronage.

There are no docks or piers available along the shore for mooring anything like Mabrouka and the restaurant buoys, marked as they are by two or three weather-worn plastic jugs tethered like bland carnival balloons just outside the surf line, are enough to raise a nervous bubble of bile in even the most trusting of sailors. However, relying on one's own ground tackle to hold in the notoriously uncertain anchorage doesn't provide much more confidence, so it is common enough to take up this patronage-for-moorage deal as being as good as anything. It's certainly convenient.

So we accepted Edgar's (or Eduardo's or Ernesto's?) offer and followed into the bay as he stood posed in his unusually pristine panga like George Washington crossing the Delaware. Lunch, it seemed, would be at Domingo's whose tongue-in-cheek signage boasted going concerns in London, Paris, Rome and, yes, Yelapa. Ten or fifteen minutes later we found him drifting by his buoy waiting to hand us the tag line with which, with no small amount of trepidation and an attendant helping of either foolishness or bravery, we hauled the mooring pendant up out of the mysteriously dark water and tied it off to Mabrouka's bow.

Edgar expertly maneuvered his hard, fiberglass hull, with all its sharp edges heaving and surging and yawing threateningly, to Mabrouka's side in the substantial swell for Kevin and I, in two separate approaches, to leap aboard. Then we got the E-ticket ride ashore as this ebullient stranger, into whose hands we'd given our lives, first warned us to brace our feet against the forward seats, then, timing the swells for a few staccato heartbeats, twisted the throttle to it's full fifty horsepower and drove the twenty-five foot panga in through the three foot breakers at least two boat lengths high and dry up the sandy slope.

With post-traumatic bravery, Kevin and I exchanged some expletive expressions of relief and jumped jauntily over the gunwale onto the dry hot sand. Edgar had advised us that Domingo's was a family-run business, with an uncle at the helm and brothers and cousins working the kitchens and tables. I don't know whether the family entourage included the two or three men that, within the thirty seconds it took us to amble from boat to plastic lawn chairs in the shade of Corona-emblazoned beach umbrellas, offered to sell us pot, but I wouldn't have been surprised. Fine, upstanding cruiser-tourists that we are, we declined to support the local economy in this way, but soon took up Edgar's cousin's offer of passion fruit and mango margaritas as we scanned the menu's selection of seafood sampler plates and shrimp quesadillas.

>
I've used up a lot of reader patience in getting this far and there's still so much to relate, so I'll go on past our delicious meal accompanied by more, less exotically flavored margaritas and move toward exploring Yelapa itself.
Comments
Newer Older
Contents