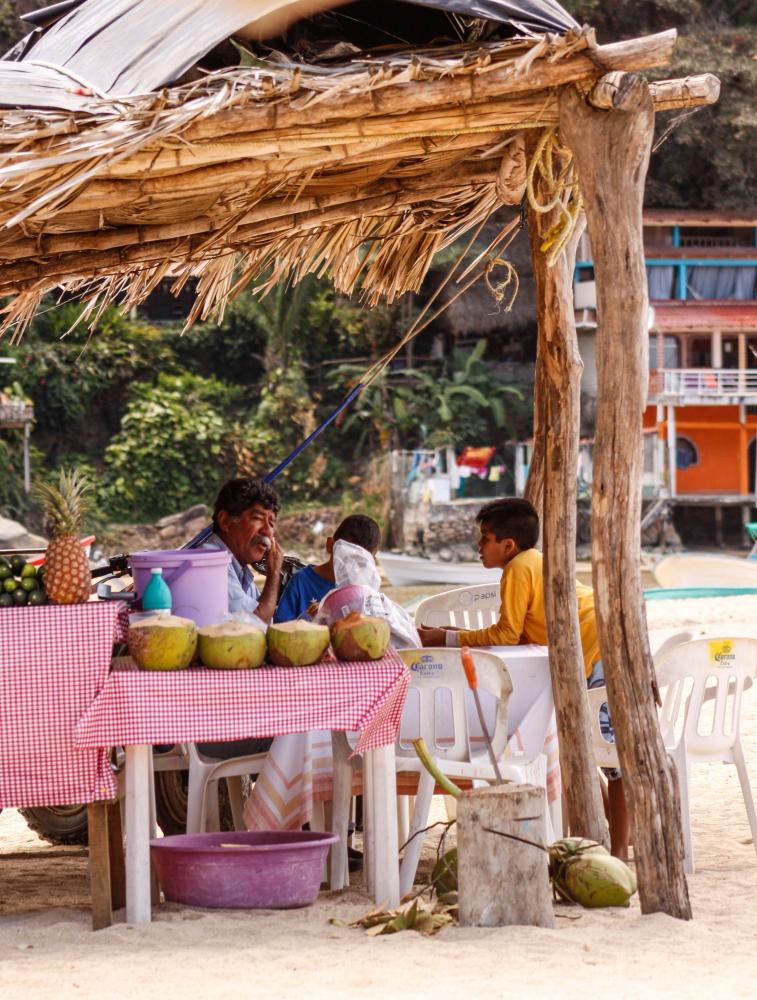 Yelapa’s beach head is dominated, like virtually every Mexican coastal town I’ve ever seen that has a modicum of shoreside sand, with shady palapas erected out of bamboo or palm trunk pillars that support a lattice work of bamboo and assorted branches. These are thatched with ranked layers of palm fronds and fronted with ranks of Pacifico and Corona umbrellas. Dining furniture is unwaveringly comprised of flimsy white or green plastic patio chairs and tables, most often spread with red or green table cloths that are held vaguely down against the sea breeze by an array of salt, pepper, and picante sauce containers. Although the food is generally pretty good and the service typical Mexican cordial, it’s the shade and the cold drinks that are the primary attraction. 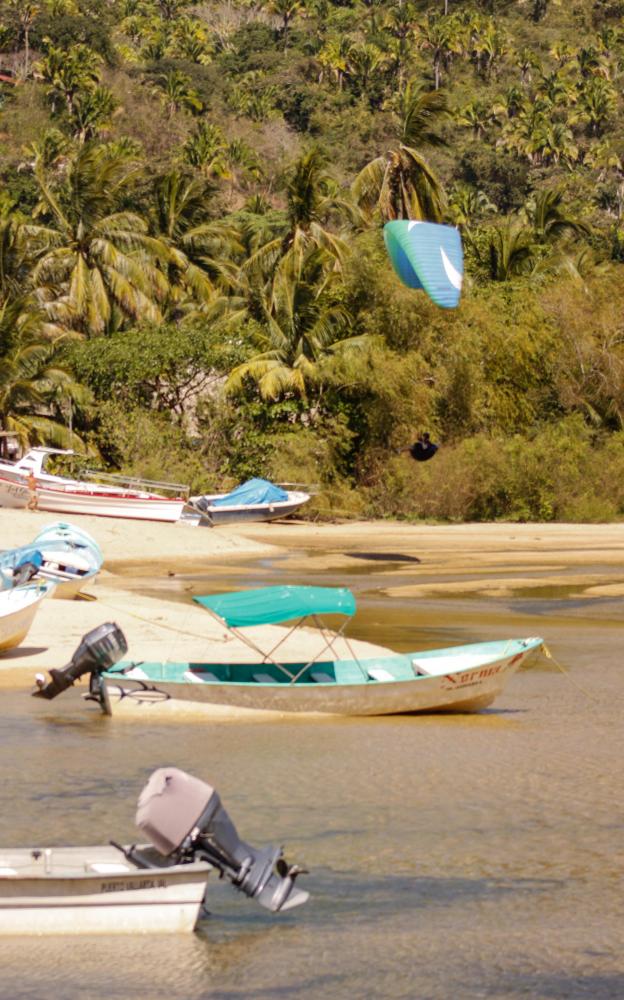 After doing battle with the usual seaside parade of wizened indigenous women and parched old men (one claiming to be one of Edgar’s uncles, …that’s another blog topic of its own) hawking all sorts of trinkets and gewgaws, we levered ourselves out of this warm, but shady setting and braved the glaring sand to walk down the beach toward town. On the way we paused to watch as several paragliders maneuvered their colorful canopies into an upwind approach over the lush, green tropical slopes to land on the narrow nape of beach between the estuary and the bay. Trudging onward under the distant gaze of blue herons, snowy-white cranes, and buzzards with their scaley, red heads, we crossed a narrow rill of water escaping vigorously through the shore into the ocean. On the other side we found hand-painted signage to point us toward the town and the waterfall. 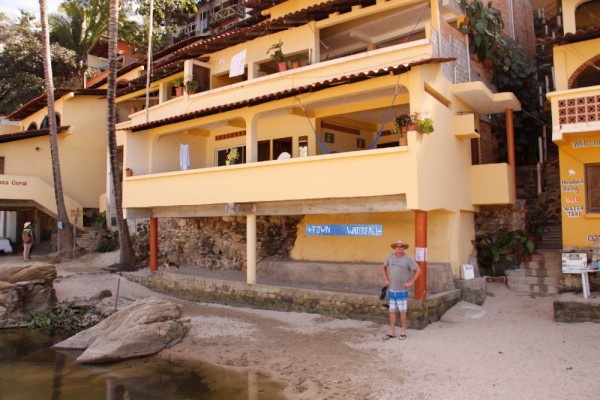 The uneven, winding concrete steps tunneled upwards through a narrow, crevice-like passage that opened out past a dusky wooden door framed in red painted brick and onto a cement pathway that continued to climb in more gentle slopes and occasional steps up into town. Widening as it led us on, the path was bordered by lush hillside on the left and a jumble of rough buildings on the right. Helter-skelter as they were, the homes and businesses were mostly well maintained, often bragging the bright blues, yellows and greens I’ve come to expect of Mexican towns. Now and then the buildings were interspersed with a half-finished or abandoned structure, but the overall impression was of a town that was happy and at least modestly prosperous. Even the incomplete buildings seemed to speak of hope suspended, not abandoned. 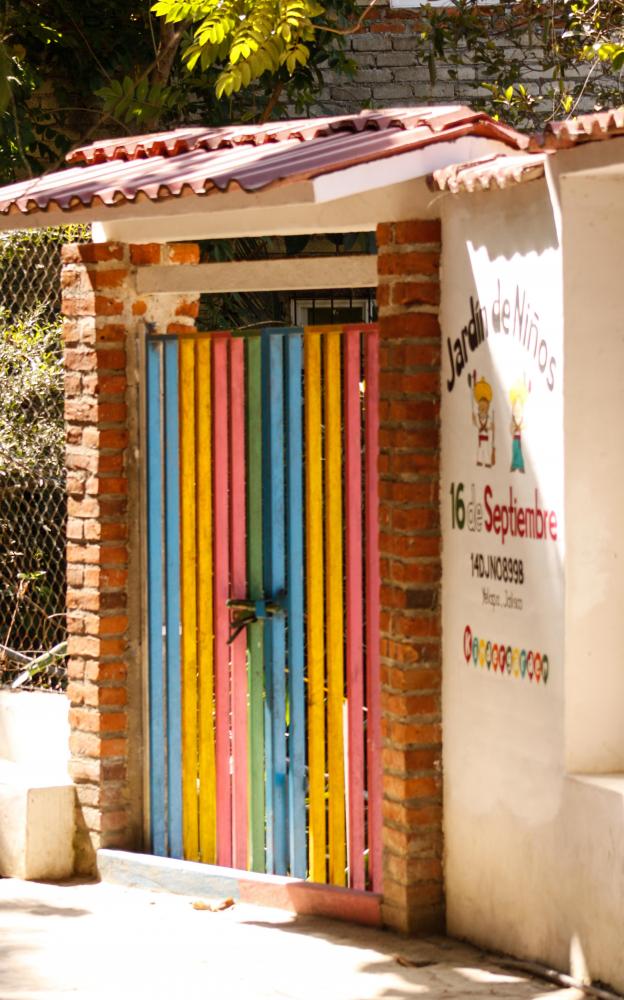 On our first visit, Kevin and I wandered aimlessly through Yelapa, admiring the relaxed, Third World ambiance. After a stop for beers and a pee at a cool, verandaed restaurant/bar, we finally had to turn around to make our appointment with Edgar for the shuttle ride back to Mabrouka. The second time was aboard Andante, and Jared, Amanda, Nick and Heather, Kevin and I started in much the same way, with lunch and drinks in the shade of Domingo’s Pacifico umbrellas, but somehow we ended up with more time and could indulge in the walk up to the waterfall just above town.

It’s a cool stroll that climbs up a gentle slope along a paved path past a sparse procession of buildings in various dubious states of either construction or decay, …it’s hard to tell which. The chilly pool sat like a jewel enveloped in refreshing mists that drifted off the flowing cliff face, making the grey rock walls of the grotto glisten in the half-light. The small grotto was draped in dark green and brown curtains of looping vines, broad-leafed trees, tall palms, and quivering ferns and a patch of sunlight hovered overhead to highlight the modest white beard of water that tumbled down from the mountain. 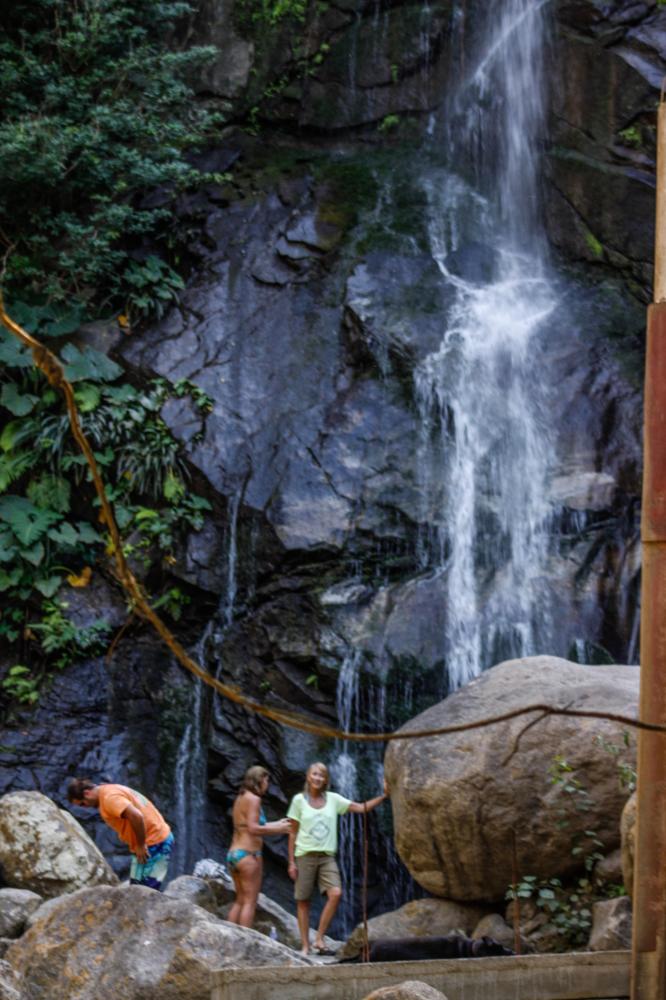 I guess our mid-March visit was not coincidental with the tourist season, because we were virtually the only visitors. Even so, a knick-knack concession had it’s tourist wares spread in hopeful display just down the trail and the small, pool-side bar offered ice-cold beers for refreshment as we sat on the flimsy white plastic lawn chairs to take our pleasure in the cool half-light of the rocky patio overlooking the water.

Yelapa certainly exhibits a more tropically exotic feeling than most of the places I’ve visited in Mexico so far, but it is perhaps indicative of the welcoming nature of what I expect to encounter all down the mainland Mexican coast. I would like to have stayed to enjoy the town for at least a couple of days, but the dubious anchorage is discouraging of that. Chacala boasts a lesser example of Yelapa’s welcoming atmosphere. It’s just a casual day or two’s motor-sail to the north, but with a much more welcoming anchorage. In any case, Yelapa should not be missed.

Partly, I think, it’s the moderately sized bay with its parenthesis of palapa-rimmed beach that makes up the idyllic scene that Yelapa typifies for me, but what gives it life is the content human activity. The fishermen are constantly charging through in their pangas, driving up on the sand to discharge the catch of the day to confederates on the beach, then hauling their boats out to trailer them home or heading back to sea for more fish. Then there’s the trickle of vendors trying to make their subsistence livings with hats piled on their heads, blankets slung over their shoulders, or trays overflowing with charms and bracelets to sell to their tourist benefactors.

These shore-side towns, universally modest, but filled with colorful, bustling, noisy life and buildings painted to match, do much to recommend visiting Mexico, whether by boat or any other means.
Comments
Newer Older
Contents