Spankings and the Wild Life

23 September 2009 | Neah Bay to San Diego
Craig
The bad news is that it was a hard spanking; the good news is that it only happened once. It happened off of Cape Mendocino. The forecast called for 10 to 15 kn of southerly wind, but what we got was 20 to 25 kn. The bigger problem was that the waves were forecast to be 8 to 10 ft swells with wind waves laid over top with a period (i.e. time between crests) of 12 seconds. What we got was a very confused sea with 2 to 3 seconds between wave crests! Since we were headed south, we were bashing into the waves. It was very uncomfortable and before we accepted the fact that we had to drop our speed to only 2 or 3 kn, there were a few times when the front half of the boat was out of the water. 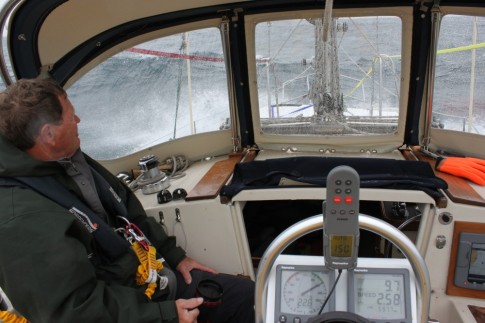 After four hours with very little progress it was clear that we were just beating up ourselves and the boat, so we tucked our tails between our legs and ran back downwind to Humboldt Bay. In the end we had a nice day in Eureka, CA sightseeing, doing laundry and recuperating (i.e. sleeping!).

Overall it was an uneventful trip from Tacoma to San Diego. A highlight for me was all our wildlife encounters. The first one was in Neah Bay, in the morning before we left. Ed and Vern were standing on the finger dock near the back of the boat when an eagle swooped in from behind planning to land on that dock. It was surprised by their presence and skidded across the narrow dock before falling in the water. It was unable to fly out of the water but it kept flapping its wings, except when a dog came over to investigate the eagle hid under the dock. It was going to drown. Wayne saved the day by using a boat hook to give the eagle a perch underwater and then lifting it clear. That's one eagle that needs some spectacles for his "eagle eyes" and water wings might be helpful too. Perhaps we just interfered with natural selection. Hmmm... 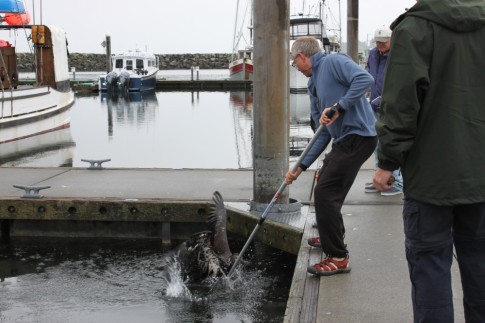 We saw lots of dolphins. Regularly on night watches dolphins appeared and put on a little show. They would arrive two or three at a time. The first time, one of them surfaced not 5 ft from the cockpit and let out a loud exhalation of breath. It made me jump. I got the impression that they were trying to get my attention - they had it! After that they darted up to the bow and surfed the waves. But mostly they would leave and then come zooming back toward the boat perpendicular to our travel and dive under the keel. I wonder if they were hunting small fish that tagged along under the boat?

The whole dolphin show was made completely magical by the bioluminescence in the water. Every disturbance of the water left a neon green trail, including our wake and the dolphins' wakes. A few nights it was bright enough that I could watch the pumping action of a dolphin's tail as he raced along beside me. Sometimes a pair would corkscrew around one another. For anyone who hasn't seen bioluminescence before, picture the pixie dust trail left by Tinkerbell in Peter Pan. It's exactly like that only green with bright flashes from time to time.

We saw dolphins in the day time clearly eating at "bait balls" of fish. The largest was somewhere between 20 and 40 dolphins that all converged on an area where were fish jumping and birds were congregating. A few groups of the dolphins swam right under the boat on their way there. We eventually saw them jumping clear out of the water as they gorged themselves on the fish.

Unfortunately we saw (and worse, smelled!) way too many sea lions. In San Francisco I had the misfortune of choosing Pier 39 marina as a place to drop off Wayne and spend the night. As you can see from the photo, the "neighbors" were too close and too many. At one point Ed counted 20 of them on the finger dock immediately beside Journey. We heard them barking away all night. 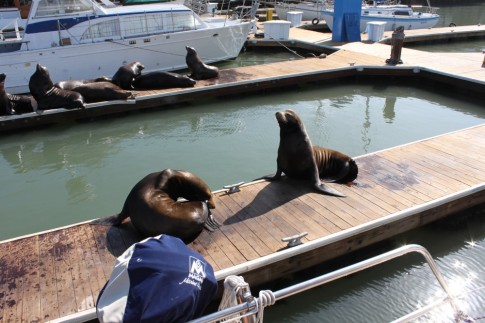 We saw three for four whales. The best sighting was an hour before San Diego where we saw one with a big grey back.

There were lots of other good things about the trip, like sailing under the Golden Gate Bridge and being spitting distance from a submarine as we came into San Diego's impressive harbor. The navy security boat charged at us and positioned their 50 caliber machine gun between us and the sub, but they were actually polite over the loud speaker once they realized that we were trapped by a slowing powerboat that had reduced our ability to get the heck out of the way.

We had a couple great sailing days and heard tons of interesting stories. That's the benefit of having a few crew members who you haven't done too much with before - you haven't heard all their stories yet!

It was a great trip. The only disappointment was that the weather was cool and grey for most of it and the wind was either too light or from the South (a direction it's NOT supposed to come from very much at this time of year). But the motor got a good work out and it's purring like a kitten. Feed it a steady diet of oil (it's British after all) and it's happy to move us along at a good clip.

For now I'm enjoying the warmth of San Diego while I work though a huge list if boat jobs and work jobs. 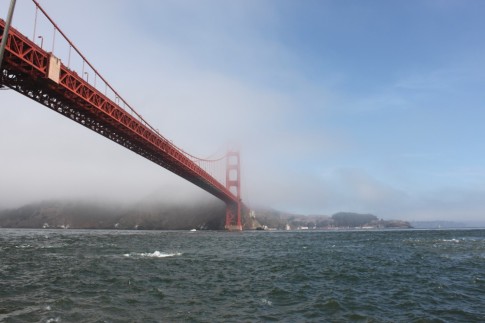