After our 5-year, 19,000 nautical mile odyssey from Maine to the Galapagos, French Polynesia, Hawaii and Alaska, we are putting our beloved Centime up for sale. She is an amazing cruiser for those like us who dream of adventure. We will miss her dearly.

Centime is a true bluewater beauty ready to sail the world. Made in South Africa and custom designed by world-renowned naval architect Dudley Dix, she is highly capable of navigating rigorous weather. Stunningly elegant and artfully crafted, Centime offers traditional lines above the water and a fast modern fin keel and sleek underbody. Her classic design starts with her clipper bow and follows through her graceful sheer, classic tumblehome, horseshoe cockpit and champagne-glass stern. Her cabin is well appointed with Corian countertops, numerous oval bronze ports and a bright interior. Handcrafted features abound, made from Burmese Teak, holly, birds-eye maple and mahogany.

Fully outfitted for safety, ease of handling and extended passage-making she offers a robust stability curve and can be easily managed from the cockpit. Maintained to exceptionally high standards and outfitted for world cruising she possesses a reliable Volvo engine, large water and fuel tanks, solar panels, wind generator, a high-capacity watermaker, autopilot, self-steering wind vane, AIS, SSB, satellite phone and has been recently refitted with over $70,000 of equipment and upgrades.

Shearwaters have won the Cruising World's Design Awards and Annapolis Boat Show's "Best Traditional Voyagers" and "Best Cruising Boats." Once you sail Centime you will understand why the former editor of Cruising World chose her sistership, Ithaka, as her own private yacht.

"After seven grueling months of boat shopping, when we stepped aboard this vessel, we had the good sense to buy her on the spot." Benadette Bernon, on s/v Ithaka, Centime's sister ship.

Centime is listed at $175,000 with Swiftsure Yachts in Seattle. For more information http://swiftsureyachts.com/products/centime-shearwater-39-cutter/ or call Pete McGonagle at 206 378 1110.
More
Comments

East of Bora Bora in French Polynesia lies the lush island of Taha’a. She is a high, green tropical island of volcanic origin, surrounded by a circular lagoon, fringing reef and numerous small islands called “motus.” We snorkel through a pass between two motos where the wild South Pacific enters the calm lagoon, bringing in cool water and nutrients to feed this abundant ecosystem.

Entering the pass at the far end, the current sends me drifting over an undersea garden. There are thousands of reef fish of every color. Schools of yellow, black and white striped butterfly fish swim up to me as I enter, like it’s a Disney movie. Iridescent blue juvenile damselfish that grow into bright yellow adults (how does that happen?) dart in and out of purple coral. Orange and white clownfish, Nemo’s cousins, swim through two and three-foot wide bright pink anemones. Artistic Picasso fish have cream-colored backgrounds painted with pastel pink, blue and green markings. Bright blue-green parrotfish with pink stripes and lime highlights look at me with their yellow eyes like they are in love, or at least posing for a photo.

With the clear water and natural abundance it is ten times better than swimming through the New England aquarium. Dennis and I linger and drift, and then repeat the process, until we shiver and head back to Centime for hot showers and soup.

The candid photo below illustrates how Dennis feels about this experience.

After the Coral Garden drift snorkel (see above)

...I captured this candid shot of Dennis after our snorkel - pure bliss.
More
Comments

Tonight there is a Polynesian party on the more remote island of Tahaa. The music is in full swing with energetic drums, guitars, ukuleles and singing. Hips are swaying on the young and old, on Polynesians and international travelers. What started as a banquet with many kinds of fish in delicious sauces, and fresh local fruits and vegetables, has erupted into a frenzy of dancing: beautiful women with gyrating hips, their long dark hair entwined with bright flower crowns. The men, muscular from hard work, keep the beat on drums and pounding feet, some twirling sticks of fire. We eat, drink, dance and sing until 1:00am when the Polynesians carry home their young sleeping children.
More
Comments 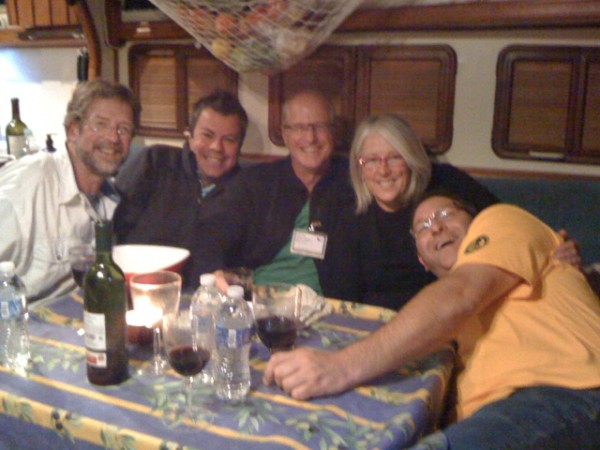 Awesome dinner on Centime. This is Michel, Danielle, Donato, Jim and me. Donato made an amazing frittate.
Added 4 February 2012