It's taken us 37 hours but we've done it... we've crossed part of the Bay of Biscay and arrived in Santander. It is quite an achievement for us given that we've never been at sea for so long with just the two of us aboard on a two hour on and off watch system.

The Bay of Biscay is notorious for huge swells, rough conditions, a continental shelf where waves form as the seabed comes up from 2000+ meters to 150 meters in a relatively short distance. Needless to say, having read the pilot books about the Bay of Biscay we definitely didn't want to scare ourselves stupid so with no time schedule to dictate our departure, we were able to be selective on weather conditions.

The gods must have been looking down on us as the forces of nature seemed to align. Firstly, we could leave La Rochelle at first light (therefore spending only one night at sea) and make full use of the six hours of spring tide which was actually going the right direction - out from La Rochelle and in between Ile d'Oleron and Ile d'Rea. The wind was also predicted from the North/North East for the next few days - this too was in the right direction.

Our chosen port of Santander (access all tides and sea conditions) allowed us to set more or less a direct course from the north west tip of Ile d'Oleron to Santander, missing the firing range that exists approximately 30 miles off the French coastline from Royan to Capbreton - we certainly didn't want to be passing through a firing range and become a target!

Aiming for the port of Santander also gave us a contingency if the wind and/or swell got up - we could head towards Bilbao to the east and Gijon to the west which are also accessible at all tides and sea conditions.

At 6.00am we departed La Rochelle and within a few hours we were passing the Chassiron Lighthouse just off Ile d'Oleron making our way South.

From a sailing point of view, we initially started out with just the mainsail as using the genoa caused us to yaw which was pretty uncomfortable. By early afternoon the wind dropped so we took the opportunity to try out the cruising chute for the first time since taking ownership of Flirtie. What a difference that made to the motion and to our speed - excellent and it looked lovely too. 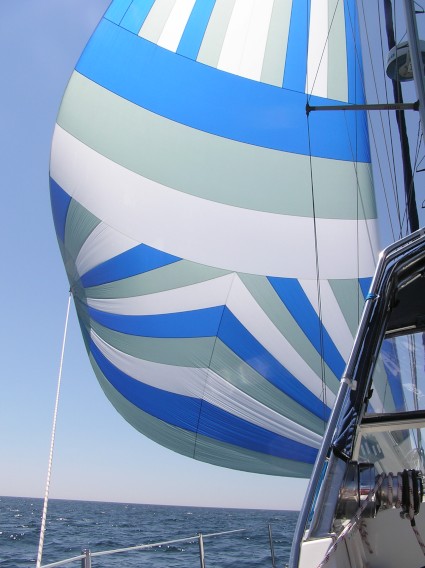 Dolphins joined us several times throughout the first day, during the night and again the following day. They kept us entertained whilst we oohed and aahed. We never tire of seeing these wonderful animals. 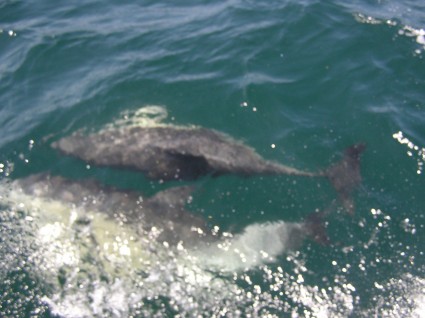 By early evening the wind had returned and we were able to sail on a beam reach with mainsail and genoa, steaming along at 6.5 knots - fabulous. Overnight and for the majority of the next day the wind dropped as predicted so we ended up motoring or motor sailing until we reached Santander.

As the depth increased to over 124 meters the depth sounder alarmed and kept sounding until we eventually found the instructions and turned it off. From this point, the sounder could only capture movement below the boat. At one point, it captured a depth of 3.5m as one of the dolphins dived underneath.

Apart from looking at the chart/chart plotter we didn't notice when we went over the continental shelf as it was dark. The next morning you could clearly see the difference in the sea as it was blue and very clear.

During the night the VHF radio came to life with a weather forecast which was pretty exciting as it was being transmitted from Spain and spoken in English, albeit very fast indeed. That's the first time in two years we've heard a forecast in English.

The sunset and sunrise was just beautiful and it was a first for us to encounter a sunset and sunrise within a 24 hour period at sea with no haze, cloud or hills to distort the sun. The night sky was clear with bright stars and a moon that light up the sea - truly magical.

Lunchtime the following day, approximately 30 miles off from the coastline of Spain we started to see shadows of the mountains that stretch across the whole of Northern Spain. Seeing this mass of land played havoc with the mind as it looked so close however it took us another five hours until we actually arrived on the welcome pontoon at 'Marina de Santander'. We went to report to the Capitania to find it shut on a Sunday so feeling very tired and weary we returned to the boat, had some dinner before early to bed.

Would we do anything different? Yes. In the conditions that we had we would change our watch system to three hours on and three off as two hours didn't really allow us to sleep.

The next morning we reported to the Capitania who were extremely helpful and friendly. We were allocated a berth and told that a 'marinero' (marina assistant) would help us moor up. We were also given a town plan and recommendations on places to visit along with the bus timetable and a map showing the bus station. What an excellent service.