Photo: The statue of Christ of the Mercy watches over San Juan Del Sur...

From Puesta Del Sol we had choices, the main one being our flights to England - both Dave and myself wished to fly back to the UK for Christmas. We had pre-booked tickets from San Salvador, but on a practical level that meant returning north from Nicaragua to the Bahiá Del Sol. Neither of us wanted that - though we had made many good friends in Bahiá Del Sol, El Salvador had not been a massively overwhelming experience during the year we had spent there. We'd had problems, first with our cat Nellie hunting and bringing cockroaches onboard - which had been a devil to get rid of, then Dave had been quite ill with Dengue Fever. On top of that we'd been struck by lightening. Though it was easy enough to get to the airport from Bill & Jeans buoys, we'd since made the decision to leave El Salvador to head southwards through Nicaragua and Costa Rica to find somewhere to leave Sänna whilst we travelled back to England. We figured that we could somehow get flights back to San Salvador so that we could use our original return flight tickets to the UK. We soon found that indeed we could travel back north - but not easily, everywhere we looked involved long four or five hour drives to regional airports using buses, taxis or rental cars for connecting flights to El Salvador - and all the marinas we investigated in Costa Rica were incredibly over-the-top expensive and we now had our bitter insurance battle with our insurers Allianz over our lightening damage. None of it looked easy - so we made the reluctant but sensible decision to return northwards to the Bahiá Del Sol to once more tie up to one of Bill's mooring buoys.

We were sad to leave Nicaragua. On the evening before our departure from Puesta Del Sol we re-affirmed to each other that our decision to head north was right, it made total sense. We planned to rise early to catch the morning tide, Top Cider had already grounded on the sandbank when they left a few days before so we needed as much tide water as we could to reach open sea. I awoke to find Dave already up and about, he brewed my morning tea then sat himself down.

Let's head south, he said. I was surprised, then asked why. He told me he didn't like the thought of yet more time in the Bahiá Del Sol, he said that although everything made sense to go back north he wanted to head south. We'd work things out and something would turn up. I thought about this for only a second or two then agreed - all our planning and deliberation during the past week went out of the window. We already had our departure papers and Nicaraguan Zarpe international clearance for El Salvador - though we could easily change these to head south to Nicaragua's southern border with Costa Rica. We could get a new domestic Zarpe to then exit Nicaragua in San Juan Del Sur. Our passports could be stamped out there too. We untied Sänna, drifted out into the channel and told Singularity that we were heading south, not north.

The first big problem we had were the Papagayo winds. These infamous winds gust up to forty knots or more most days and would be against us. Blowing from the Caribbean side of Nicaragua and Costa Rica, these winds present a real challenge, a challenge discussed almost daily by American and Canadian sailboats back in the Bahiá Del Sol. The best plan to tackle the Papagayo's, we were told, was to wait for a weather gap then go for it over a few days and nights - but we would not have this luxury with our sudden decision to leave Puesta Del Sol. Dave made the point that we'd sailed strong headwinds with big seas numerous times before, Sänna was in her prime heading upwind, we could just deal with it. We estimated a two day overnight passage from Puesta Del Sol to San Juan Del Sur, most of it in the Papagayo headwinds - the distance was around a hundred and forty or so miles.

To begin with we had good downwind sailing with around fifteen to twenty knots across our stern - nice sailing. Then, just off the Estero La Garito river estuary, the winds backed then veered suddenly in almost every direction before settling to blow through fifty to sixty degrees off our port bow. In the short distance of about half a mile they blew up from five to well over forty knots. Wow! The main problem with these Papagayo winds is that they're not constant, they gust. They gust suddenly, from ten up to fifty knots in just a few minutes so it's difficult to set your sails. Constantly reefing and unreefing is fine if you have a good strong crew prepared to work relentlessly through the night - but when there's just the two of you with the skipper insisting on restful sleep then it becomes hard work trying to keep a constant boat speed through difficult seas. We'd made the prior decision to set our storm sails then just accept the slowing down during the intermittent lulls. Sänna always sails best with her storm sails set so we unfurled our inner staysail then reefed the main with one reef, furling away our main headsail tight. We would be on a constant starboard lean through rough seas so we tied everything down below, we would be in storm conditions throughout the night. I made up a single lean-to storm bunk, meaning that one of us could sleep while the other stood watch. Then we remembered how many times we'd done this before, sometimes for many long weeks when we'd crossed the big oceans to be here. We were actually quite excited.

It can only be said that we experienced glorious sailing all the way to San Juan Del Sur. We had both forgotten how much we love upwind sailing, much rather the constant lean-to of the boat to rock'n'rolling our way infuriatingly downwind. Sänna is designed with a fin keel and spade rudder - not every sailor's cup of tea, many sailors prefer the comforting safety of long bilge-keels with supported skeg rudders - but at the expense of sailing good-to-wind upwind. That's not for us, we'd made a conscious decision to find a boat to circumnavigate eastwards against the prevailing winds... so Sänna's keel design is an important factor in what we are trying to do. She's sturdily built to high German standards, we've never to date experienced undue problems. Right now we experienced the most invigorating sailing since we'd left Port Townsend for San Fransisco over two years before.

I took the first overnight watch while Dave slept soundly below. It was rough going but everything was under control, I did not experience any problems through my night watch. We had the occasional big wave break over our bows but Sänna generally cut through the waves with comfortable ease. Around two in the morning I woke Dave to take over the watch. I told him there was nothing to worry about so far and that we were making good speed. I then went down to sleep below. In the morning, I woke to glorious sunshine with Dave fast asleep in the cockpit. I gave him a strong piece of my mind, this is not good sailing practice at all, he would be summarily dismissed from most crews for falling asleep on watch. I looked around, we were still on course courtesy of the autopilot, we were about a mile or two offshore. Sänna was taking everything in her stride, pounding through the seas while leaned over to starboard with almost dry decks, the winds blew between twenty-five to forty-five knots with the seas reasonable okay because we had the distant shelter of land, meaning that the predominantly offshore winds didn't build up into rough storm seas. The winds backed and veered from time to time between fifty-five and forty degrees - good angles for sailing upwind. Sänna will normally sail well down to even thirty degrees off the bow.

I made a porridge breakfast with a decent cup of Yorkshire Gold tea. We would easily make San Juan Del Sur by mid-afternoon, it has a nice wide bay entrance with a good sheltered anchorage. Approaching the bay our radio suddenly crackled into life with Ankyrios calling up - they'd been watching our approach for a while on their AIS. We knew they were in San Juan Del Sur with an incapacitated engine - courtesy of the panga fishermen with their long lines. Ankyrios is a catamaran with two engines, they'd limped into harbour on their one remaining engine. We dropped anchor around three boat lengths from Ankyrios, while talking with them on the VHF there was banging on the hull - the Nicaraguan harbour officials were here already after only fifteen minutes of dropping anchor.

Nicaraguan officials are fine and friendly. There were four of them, the harbourmaster, customs officer, immigration and the health official. We explained that we were not entering Nicaragua, we'd sailed down from Puesta Del Sol having already checked into Nicaragua there. They inspected our papers, drank coffee then we talked about Nicaragua and England for around an hour or so. Nicaragua is an exceptionally friendly country - we were told to contact them again when we decided to leave for Costa Rica. Our biggest problem was that we both loved San Juan Del Sur immensely, it's a laid-back backpacker's paradise with everything we needed, we could get ashore easily by landing the dinghy at the cruise dock to walk five minutes into the town, there were great places to eat and drink and it was so cheap.

We stayed in San Juan Del Sur a few days, most days with the Papagayo's howling away even though we were well protected. We vowed that we would come back to San Juan Del Sur but, of course, we never will. We never do. We always say this - if we counted all the places we would one day go back to then Bob's your uncle. We both agreed that we'd made the best decision to head southwards rather than back to El Salvador. 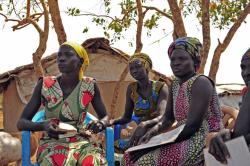