Photo: The rainstorm looked nothing much until it hit us...

Daylight faded rather too quickly, Marie pointed to what seemed to be a rainstorm off our port side, it looked strangely ominous but not that threatening. We had seen storms like this before, there was no lightening or dark heavy thunderclouds, there was nothing that bothered me unduly, not that deep pitch in your stomach when you know you're going to get hit unless you do something. I looked at the sails, by this time both our main and headsail were full out, their shapes filled out nicely. We had unreefed only a few moments before, now we made around five knots or so through the water in about ten to twelve knots of breeze across our stern quarter - we should easily be able to drop anchor in Playa De Coco sometime after dark. We were both relieved to be sailing well after finally shaking off the Papagayo's rounding Punta Elena - the heavy stuff was now surely behind us. Marie said maybe we should reef down if there was some bad rain heading our way. I looked again, maybe we would get wet but it really didn't look that bad. Much better to get into the shelter of Playa Coco - it would not be easy anchoring in the dark with all the moorings there.

A few minutes later Sänna heaved hard as the breeze suddenly veered off to our port bow, the sails flapping wildly out of control. The wind blew crazily in a new direction, from ten knots of breeze on the wind vain, I watched it climb - in the half light I saw it increase to twenty, thirty, forty knots, then it climbed to over fifty knots and hung around the sixty figure all in a few moments. We had not encountered anything like this since the lightening storms back in Mexico. This was the thing - there was not the dreadful warning of lightening and thunder that suddenly drives bad winds against you. By this time we were in dire trouble - all in the space of less than thirty seconds. Then came the torrential downpour rain. The autopilot alarm burst into life, screaming warning beeps into the chaos as the rudder disconnected from the pilot, the pressure on the helm was too great to hold a course when the vice like windstorm gripped us. By now there was serious risk of losing our sails, they flapped wildly, they would tear themselves apart if we didn't get them under control quickly. The boom swung full across the boat, then the main sheet snapped taught, almost breaking. The noise from our near shredding sails was indescribable, you can't explain that to anyone. Sänna pulled full into the squall as the sails filled with nearly seventy knots of wind. She couldn't take this. We started to lean over to starboard, neither of us wore our life vests and Sänna was beginning to go over. I grabbed the helm to steer out of the wind - no response, the force of the wind was far too great. I screamed to Marie to let both sails go, but she was already ahead of me - the boom and sheets flayed loose as she let them go - good one Marie. Well done. She probably saved us. Sänna then leaned and leaned, the starboard deck was in the water, the sea poured through the open portlights - much more of this and we would easily capsize. I couldn't control the helm, we were at the mercy of this devil wind that was surely going to sink us. The bows crashed under the water - the storm wave cascaded through, flooding the cockpit, Marie turned and stared - she knew we were in bad trouble. I looked back hard, I could see in her wide eyes that she thought we would go under. I tried with all my strength to steer the bows through the wind to heave-to. No response. The gale had us firmly in its grip. I turned the helm to somehow get downwind, again nothing happened. Marie winched the sails hard in, she was thinking straight, she got the lines tight under control. Another huge gust - we once more leaned right over to our starboard side with yet more green sea inundating below.

It wasn't the sea - there were no breaking or rolling waves to capsize us. In my mind I knew we were going to be ok, whenever Sänna leaned hard over the wind blew off the top of the sails, we always came back up - it was the volume of water down below that might sink us. I pulled and pulled on the helm, Sänna began to come around - Marie instinctively eased the sails as we came off the wind, Marie was a gem, once more she was the big game changer. The rain by now was torrential but we didn't mind that, it washed the salt-cake from our eyes. Where had this rainstorm come from? It was the dry season, it hadn't rained for weeks.

Then it passed, as quickly as the wind came it died. It rained and rained but the wind dropped like a saturated sack. Sänna came fully upright - we quickly dropped the sails to start the engine, I was out on deck furling in the mainsail, I was absolutely sodden wet in nothing but a tee shirt. Every damn thing came under control. Then our navigation lights suddenly cut out - it was tar-black and we couldn't see a thing. We were around two hours out from Coco, later in the darkness of the moonless night we motored in around the headland without navigation lights. Marie stood rain-soaked on the bows to guide us in, she told me when to drop the anchor. Then we checked everything, Sänna was ok, where was the water below that would've sunk us? Everything was dry.

Read more about the mishaps and mayhem of Nellie, The Ship's Cat 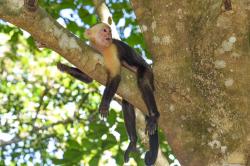 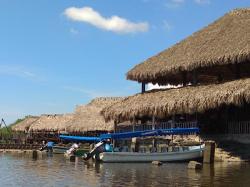 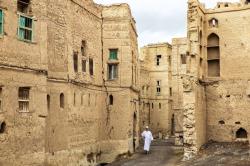