We sailed the nine miles or so from Bahiá Ballena to the Curu Wildlife Refuge relatively easily, the breeze being just enough to drive us along the rugged coastline through a nice flat sea. We were in no hurry to make the anchorage and by staying close inshore we could take in the spectacular rainforest landscape hemmed in by rugged granite cliffs that have long been ravaged by the relentless power of the Pacific Ocean. We rounded the headland to drop anchor about ten boat lengths or so from the beach, the bay was calm and well protected by the high island of Islas Tortugas less than a mile offshore - but we would once more be faced with a beach landing pounded by the surf to get ashore. The Curu wildlife refuge, though a vast area, is smaller than the tourist-ridden Manual Antonio Park further south, much quieter, more hidden and secluded. We'd anchored here because of the large colony of white-faced capuchins and incredibly noisy howler monkeys that lived wild in the pristine virgin rainforest of the Nicoya Peninsula. Of course, I had my own reasons for visiting the rainforest hereabouts...

Many years ago, in my construction contracting days in the north of England and Scotland, I owned two pet capuchin monkeys. White-faced capuchin monkeys in fact, Pablo and Fred. Nowadays, keeping a primate for a pet is against the law in my country and rightly so - it's no life in captivity for any primate, even in zoos they're not often kept in the right social conditions. I tried my best to give Pablo and Fred a life of relative freedom - Pablo travelled around various construction sites with me, he even possessed his own little tool-belt and hammer. He was happy enough scampering up and down the scaffolding causing a nuisance, but nighttime usually meant confinement in his small cage inside some dilapidated contractor's bed & breakfast somewhere, so Pablo was really my show off plaything - these days I know in my heart it was all wrong.

For a monkey Pablo caused a lot of trouble, his habitual trick of shaking a cooing admirer's hand while using the other hand to pull down their fly zipper to search inside for the green grapes he loved - a trick taught to him by mean-minded scaffolders working on a Glasgow hotel, lead to lots of embarrassing confrontations and sometimes intervention by the local police. Meanwhile, not so tame Fred, he escaped. He picked the lock to his garden enclosure one night and was gone. He lived through the hot summer months by climbing drainpipes during the night, entering houses through open windows to then rummage through bedroom jewellery boxes for the shiny objects he loved - often with the occupants asleep in bed. He made the local news big time during his long stint of freedom, becoming an overnight celebrity with a growing number of excited followers. So I myself was keen to see white-faced capuchins swinging free and happily content in the wild.

We anchored overnight so that we might get a good early start into the forest, there are numerous marked paths to choose from but first we would have to pay a fifteen bucks entrance fee at the ranger station - the money goes towards the upkeep of the national park and is well spent. After a good evening meal of pesto pasta with tomato bruschettas followed by a cool evening swim, we turned in for the night - but it was not an easy sleep. It was calm enough out in the bay, but howler monkeys rise extremely early before sun-up and don't much care about sleeping Englishmen. The loud whooping roar of a male howler carries a long distance from the treetops - and for every decibel of hormonal driven testosterone there is an answering crescendo of noise from every male in a wide vicinity. The noise has to be heard to be fully believed.

The ranger station opened at seven in the morning, landing the dinghy was this time quite straightforward and, other than a long drag up the beach beyond the surf line, we were ashore dry and kitted out for our long day trekking in the rainforest. We left most of our possessions that we would not immediately need in a beach bag hidden inside the dinghy, forgetting that capuchins are avid thieves beyond the reach of normal law and order - a fact that Fred's thieving instincts should have taught me only too well, it had taken me two years to pay off the fine from the hoard of Fred's stolen jewellery eventually recovered by the Nottingham police.

From the ranger station we had choices, the longer trails that followed the cliff edge around the bay would be too taxing given the limited footwear we had, so we decided to follow the river that emptied into the bay - though the ranger warned us that crocodiles habituated the waters and that we must watch our step. We refused the offer of a guide on the basis of the fifty bucks charge - Costa Rica is not known for its cheap cost of living, although we felt bad in some ways because these guides need to make their living. Nevertheless, I felt I was enough of a monkey expert to make our way through the park under our own steam. I was completely wrong of course, but fortune favours the brave.

We followed the trail by the river, it was easy enough with the coolness of the forest providing relief - the canopy shade shields out the sun and being the dry season, the relentless humidity of the monsoon wet was not yet a problem. These were the nice trekking conditions that we thoroughly enjoyed. We quickly came across white-tailed deer, armadillos, then fascinating trails of millions of leaf-cutter ants scurrying along with pieces of tree leaves they've cut free to return sometimes a mile or more back to their huge complex nests built to accommodate the demands of one single queen. Also in the forests are numerous snakes, including the ubiquitous Boa Constrictor as well as a good number of poisonous species too. In the distance, the howlers began their mid-morning crescendo roar.

We quickly found them, we just had to make our way to where they were. The howlers were high in the trees, a large colony of around a hundred or so. The noise was mind blowing whenever one of the males kicked off, we spent around an hour tracking them through the forest as they moved along through the trees. Later in the afternoon, conscious of the rising tide and our dinghy left on the beach, we made our way back to the ranger station where we could eat in the small tica restaurant serving local traditional food. Whilst there we were suddenly inundated by large numbers of capuchin monkeys rampaging through the camp stealing food from other visitors, they tried to sneak into the restaurant kitchens before deftly opening visitor's bags to rummage inside - that's when we suddenly remembered we'd left our bag inside the dinghy tied up on the beach. Too late, I pelted along the beach to scatter a large troop of capuchins that hastily escaped high into the trees - along with various items of our food and clothing, Marie's sunglasses and spare flip flops. Yup - thieving Fred would have been proud.

In the evening we returned to the beach with wine and beer, we sat watching the fabulous sunset joined by a group of young women who were camping in the ranger station lodges. From time to time we were also joined by more curious capuchins venturing onto the beach to see what they could find. It was such a nice location that we stayed anchored for a few more days, relaxing before once more making our way southwards to Costa Rica's border with Panama. Costa Rica is a nice country, it's relatively expensive with few facilities for sailboats which in many places do not seem to be welcomed, but the wildlife is there in incredible numbers if one takes the time to get ashore to explore the remote locations that being boat bound allows. 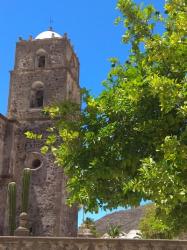