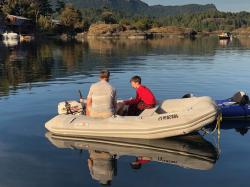 A Quick Cruise Through The Gulf Islands A Quiet Evening in Pirates Cove Last night in Pender Harbour
Today we drove from Whistler to Pender Harbour to begin our new chapter in cruising... Coastal British Columbia. After wintering at the dock of Rollie and Evie Rolston, Estelle was ready for her new adventures. Having arrived late in the afternoon, we just did the essential loading and unloading that allowed us to make supper and find space in the berth for sleeping.

19 April 2017 Pender Harbour
With a forecast for rain, we jumped up and began the job of getting the sails on before the rain began. Fortunately it kindly held off until the job was finally done in early afternoon. Installing the main became more of a project than necessary as the installation of the new Mack Pack was a slow project due to some unclear instructions. But all was complete, all loading and unloading complete in time for dinner.

20 April 2017 Pirates Cove, DeCourcy Island
By 0900 hrs we were casting our lines off to begin our first BC cruise. The plan was for a short cruise back to Strait Marine where we launched last fall. Cruising in BC can be a cool affair, even in summer, so we have ordered a complete cockpit enclosure.
Motoring quietly out Pender Harbour, we passed countless small marinas telling of how busy the small harbour would be in mid-summer. But today we were alone in the harbour. Bearing off, we laid our course for Silva Bay, a small harbour just off the southern tip of Gabriola Island, about 25 miles away. Even in the calm airs the temperatures were cool enough for us to dream about our new enclosure. Our course required a slight dog-leg in mid strait to avoid "WG" zone, a naval testing zone. We watched two military ships moving back and forth in the area and were told by "Winchesley Control" that the area was active, so we stayed well clear. Approaching Silva Bay, we noticed in the current tables that the current in Gabriola Passage had just turned in our favour and was running at just two knots. So, rather than stop in Silva Bay and have to wait tomorrow for slack, we decided to head through. The Gulf Islands cruising area is an area off the east side of Vancouver Island extending up to about Nanaimo. The cruising area is primarily created by four islands running in a south-east direction with "passes" between. And currents in the passes can run up to 9 knots, so have to be taken seriously.
Safely through Gabriola Pass, we motored down into Pirates Cove, a tiny harbour with a provincial park ashore. We were told by "John", one of about 10 people living on the island permanently, that in summer the tiny harbour could have up to 70 boats in it, jammed in cheek to cheek. To manage it, there are chains along the shore requiring an anchor off the bow and a stern tie ashore, all managed by a busy harbourmaster.
Ashore we went on a nice hike and met a group of early season kayakers out for a cruise. Back aboard, we sat in the cockpit until the cool evening air drove us below to the cabin warmed by the espar heater. 21 April 2017 Glenthorne Passage, Prevost Island
Today we woke to another dry day, a rarity this spring, and headed out on our way south. The plan is to be close to Active Pass for Sunday morning when we will head across to the Fraser River and Strait Marine. Porlier Pass
Again in calm airs, we motored down winding through the islands and passages until we rounded up in Ganges Harbour. Ganges is clearly the social and boating center of Saltspring Island. In the busy little harbour we worked our way in between the mooring field and the seaplane taxi lane. We dropped anchor and took the dinghy ashore where we found a pretty town with everything a cruiser could need... grocery store, bakery, specialty coffee, wine/beer and basic marine supplies. And we supported each one, ensuring an excellent meal for our 44th anniversary. Back aboard, we decided to find a quieter spot for the night and motored 3 miles across Captain Passage to drop anchor in Glenthorne Passage where we shared a protected anchorage with two other cruisers. In spite of the forecast for 20-30 knot winds, we enjoyed a quiet night. 22April 2017 Montague Harbour, Galiano Island
In the morning we wasted no time in getting underway. In spite of the lack of wind in the night, the forecast was still for even higher winds and heavy rain to start in the afternoon. So we were underway and motoring into Montague Harbour by 1000 hrs. Montague Harbour is surrounded by huge cliffs in all directions. In the north end, we picked up a mooring from the provincial park and headed ashore to hike the park's well kept parks. Although the rain did begin, we were sheltered in the dense foliage of the park. And we could feel the wind begin to rise. After an excellent hike, we were back aboard and battening down for a nasty afternoon. Driftwood Art, Montague Harbour Provincial Park
A quick check of conditions out in mid-strait confirmed that the winds really had gotten up to gale force. But in the shelter of the surrounding mountains, we had only a few light gusts. So by mid-afternoon we were headed ashore into the small village of Montague Harbour in light rain and breeze.Montague Harbour does not take a full day to visit. In fact, a 20 minute walk allowed us to see its sights. So back aboard for the evening, we tucked down below, again talking about the anticipated benefits of our new enclosure. Today's plan had two objectives... Plan A, get through Active Pass at slack and Plan B, enter the Fraser River at its lowest outflow, about 3/4 hr before high tide. Plan A worked, sort of. Dropping the mooring at 0910 hrs, we motored out Montague Harbour and down to the entrance of the pass. The currents felt right, so we headed in... followed by the Spirit of BC, one of the BC ferries between Vancouver and Vancouver Island. And just to make the morning more entertaining, Victoria Marine Traffic (listening to us talk to the Spirit of BC), suggested we contact the Spirit of Vancouver Island, entering the pass from the other direction. So, we just tucked into a small cove and watcher the ferries pass in the narrow confines of the pass. Spirit of BC entering Active Pass
Once outside, we set our course for the mouth of the Fraser. But our plan to arrive 3/4 hr before high tide was soon abandoned as we rushed across the strait in a 15 kt beam reach. A beautiful sail. At the river mouth we waited for a tug and tow to exit, and began chugging up the 6 mile channel, against a 3 knot current. But at 1500 hrs, we were safely tied to the docks of Strait Marine. Cruise over. From here, not sure. We're here until the canvas work is done, probably a week. Then, depending on weather, we will begin cruising further north... Desolation Sound and the Broughtons, always weather dependent, but with our new enclosure...