04 August 2017 | Van Isle Marina
Sunny, warm, 16C
June 3
Fisherman's Bay, Lopez Island
Like the Gulf Islands, anchorages in the San Juan Islands are everywhere, so that sailing distances are short. Today's plan was to sail to Fisherman's Bay on nearby Lopez Island, a distance of just 6 miles. So after breakfast we took the dinghy ashore on Shaw for a walk and look around.
Blind Bay, our anchorage, is on the north side of Shaw Island. And at the bay's mouth is the ferry landing and a small marina where we tied u the dinghy for a walk ashore. Shaw Island, in the midst of the San Juan group, is the least developed. According to the girls running the vegetable stand at the landing, the winter population is about 50, and in summer swells to 200, very low by comparison to the adjacent islands. And our walk down the only road leading away from the dock confirmed the solitude. In a walk of about an hour, we met one truck, with a friendly wave. In fact, the two deer we met were the only signs of life past the landing.
The landing seems to be the commercial hub of Shaw Island. It contains the ferry landing, a very interesting general store, a temporary veggie stand, and very clean public washrooms. And that seems to sum up Shaw Island. Very nice for a quiet visit. Back aboard, we prepared to get underway. We will return to this very special spot.
Having exhausted Shaw Island's attractions, we headed out for Fisherman's Bay on Lopez Island, just 6 miles away. We timed our departure to arrive at the entrance to Fisherman's Bay at high tide as the guide warned that the poorly marked outer channel was shallow. And it was right on both accounts... poorly marked and shallow. But we made it in where, again, we found lots of room to anchor.
Taking the dinghy ashore, we landed at one of the two marinas on shore. Ashore, we were met by a couple of local boaters. After chatting with them, one introduced himself as Mike and asked our plans. When we told him we were planning to walk into the nearby town of Lopez for some groceries, he said it was too far, and offered us his car. He told us where to find it, saying the keys were in it, and just return it in the same area when we were done. So we had a nice tour of the area and took full opportunity to replenish our supplies. The night was forecast to be windy, but in the excellent protection, we had a pleasant night. June 4, Sucia Island
In the morning, waiting for high tide to exit, we were ashore again and rented bikes for a tour of the area. We had the morning to bike the area, finding a nice trail in a saltmarsh, and some nice quiet roads. In the early afternoon, just as the tide was reaching high, we inched our way out the harbor, again with the depth sounder chirping warnings about shallow water. Outside the harbor, we hoisted sails and headed for our next destination, Sucia Island.
Heading northeast, we ran back through Upright Channel, through Obstruction Pass and out into Rosario Strait (the British proposal for the boundary). We had an excellent romp up the strait, rounding Laurence Point where the wind slowly died. Drifting into Echo Bay, we picked up a mooring just off Sucia Island. The island is a state park with a number of moorings. Again, early in the season, we had lots of choice. We just settled in for the night. June 5
Stuart Island
In the morning, we launched the dinghy and went ashore on Sucia Island for a hike. Being a state park, the island has both camping sites and lots of trails. We found a payment box and deposited our $20 for the mooring and explored the island. The island has three main anchorages and our stumbling the trails (no maps) took us down to all of them before we found our way back to the dinghy after a 2.5 hour hike. Sucia Island is much more rugged that we expected, so we were glad to be back at our starting point. Hiking on Sucia Island
In late morning, we were off. In a flat calm morning, it was an opportunity to charge the batteries. Just outside the anchorage, we were met by a US Coast Guard patrol who asked us all about our documents. But after a few minutes, we were underway again. In this area, with the border just a mile away, there are hundreds of boats drifting from the US to Canada and back. In fact, our route to Stuart Island, our destination, was 13 miles. But the closest anchorage we could have selected was just 6 miles away, on (Canadian) Saturna Island.
Chugging down Boundary Pass, we entered Prevost Harbor on Stuart Island in late afternoon. While much of Stuart is private, there is, again, a state park with moorings and a dock. So we picked up a mooring and settled in. We took a short walk ashore. Although most of the island is private, there is a public road. So we planned a hike for the morning.

June 6
Van Isle Marina
The last day of our cruise. But with only 8 miles to Van Isle Marina, we went ashore in the morning for a walk. Hiking the park trails to the public road, we took off exploring. Stuart Island has a very steep hill in its center, and for some perverse reason, the road heads straight up it! So after a 45 minute uphill hike, we were grateful to find not only a bench to sit down, but cold water for the taking. Run by the island community (probably less than 40), the former school has been converted into a museum, and with a few mementos on offer. I was interested to find the original settlers graveyard, but after wandering around in the woods for a while, we tired of giving blood to the mosquitoes and retreated.
Back aboard, we headed off for our final destination, Van Isle Marina. And a short two hours later, I called Canpass to clear customs. With our Nexus cards, one phone call and we were cleared.
Tied up, we began the process of preparing Estelle for haulout and a 3 month hiatus on shore. 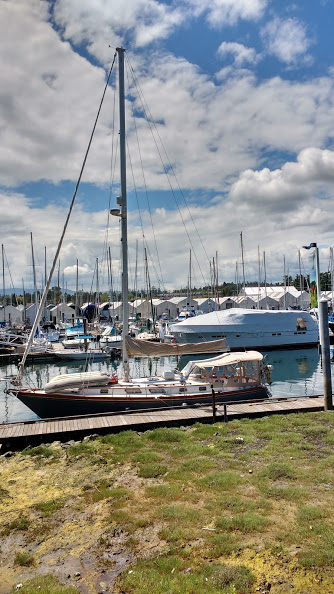 
So Estelle is now in the yard at Van Isle, awaiting our return in the fall. Plans are to return in early September and cruise until the weather tells us to stop. Then head for our new berth at the Vancouver Rowing Club for the winter.