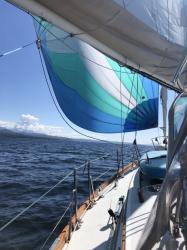 We woke in Turnbull Cove to another morning of light fog that quickly burned off leaving another cloudless day. After breakfast, we took the dinghy ashore for a short but steep a 3/4 mile hike up to Huaskin Lake. BC Forestry has built a large raft that you walk out to on a ramp. Jeannie swam in the (to her) warm water, but it was just below my threshold, so I just dipped my feet in and watched. Back aboard we prepared to get underway, and watched in astonishment as boat after boat streamed into the cove. By the time we left the numbers had swelled to ten. Time to seek out even more remote anchorages!
So we set off for Drury Inlet. I thought I had timed our travel to arrive at Stuart Narrows at slack (our last set of rapids), but our speed wasn't what I planned. But we chugged on. According to the current tables, slack was at 1;55 pm. But by the time we arrived at 2:30, we slid through at slack!
Inside the narrows, we headed for a small anchorage, Davis Bay, just a few miles into the inlet. We have three cruising guides. One said this was the best anchorage in the inlet, another said it was a navigation horror, and open to the winds. The third didn't mention it at all. But we settled in. It is a small anchorage, so that once we were anchored, there wasn't room for any other boats. Settled in, we took our prawn trap out and set it in 120' of water. We had been assured that Davis Inlet was excellent for prawning. Then a kayak expedition to explore the area. In the evening we checked the trap... nothing. So we relocated it and left it for the night. In the evening we watched a black bear prowl the beach off our stern in search for food. He finally settled on some berries and sat on his haunches munching.
Next morning, out to the trap and... success!!! We had one red rock crab, too small, so back he went, and three tiny prawns! These we kept as we are sure we will catch more and will add them to the haul for a dinner. Then we were off to Sutherland Bay at the western end of the inlet. This is as far west as we can go in the Broughtons. We anchored and set the prawn trap, then off exploring. We have one trap, using it for either prawns or crab, depending on depth. We wanted prawns, so found the deepest spot in our area and dropped the trap. Then off on a dinghy tour.We took the dinghy into some long arms through areas too tight for big boats, the only sign of life was the logging activity.
There has been extensive logging all through the Broughtons. Areas that have been re-planted grow green and lush while recently cut areas show the scars of the slash left behind. We landed at the dock of a logging camp, empty on the weekend and hiked up the logging road to stretch our legs. Not too much of interest, but lots of "evidence" of bears, so we decided to head back to the boat. Another quiet night with three prawns for an appetizer.
We are close to Queen Charlotte Strait now, and in the month of "Fogust" mornings are now foggy. Usually it burns off before eleven. We were in no particular hurry to leave as the slack at the Stuart Narrows was not until 3:30 pm. So we waited out the fog, went for another walk and picked up our trap. No prawns, four rock crabs. Three crabs were female, so we released them. The fourth was soon dispatched on the foredeck and in the pot. We need a couple more to make crab cakes.
Around noon we got underway and slowly ran down the inlet. At the narrows, we found ourselves early, but slogged through, reduced at times to just two knots. Through, we headed for nearby Napier Bay for the night. Not an anchorage of any real significance, it was close to Queen Charlotte Strait. Plans have changed. From here we planned to head for Sointula, on Malcolm Island, just off the Vancouver Island coast. But we decided to push just one anchorage further, to Blunden Harbour, home to an abandoned native village. From there, we'll start to work our way back south. Hopefully that will bean more sailing! With the prevailing north-west summer winds, we have had a motoring trip so far, and look forward to the change.
More
Comments
Newer Older
Contents