Summer Cruising in BC Part 1 Well, it is now well past time to bring this blog up to date on our 2019 cruising activities. As I write, I am waiting in Whistler for skiing conditions to improve. It has not been the best season, but I still have some how not found time to write.
Basically, our 2019 cruising season can be divided into Three more or less different cruises.

July 7-20, 2019
Our plans for an early start to the cruising season were obviously not a reality. A renovation project at home meant that we had a myriad of decisions to make, involving many trips from Whistler to Vancouver for selection of more things than I could imagine. But by early July we had had enough and headed off, relying on cell phone and email to make any more necessary decisions.
On July 7th, we finally backed out of our slip at the Vancouver Rowing Club and headed out. Plans for the trip were Princess Louisa Inlet, followed by meeting our Whistler neighbours Kevin and Joanne Fogolin in Desolation Sound for a few days of fishing.
Although our destination was north from Vancouver, we headed across the Georgia Strait to Nanaimo, a better sailing angle. After a beautiful sail across the 35 miles of Georgia Strait, we were picking up a mooring at Newcastle Island Park. Ashore, we stretched our legs in a short walk, then back aboard for dinner and bed. It felt great to be cruising again!
Next morning, after a call to WG Control to confirm we were allowed to transit the WG weapons testing area, we were off. As forecast, the wind had swung to the south-west, giving us a nice broad reach on our NNE course to Jedediah Island.
Last spring, we had a few jobs done at our friends Strait Marine. We replaced our primary chain (200') with 300' for better security in the deep anchorages. And we also installed chain counter/remote windlass control. So now, we can not just raise and lower the anchor from the cockpit, we know how much chain we have out, excellent additions for the challenging anchoring conditions in many areas.
At Jedediah Island, our destination, we tested the new system out anchoring in Bull Passage and were pleased with it, giving us real confidence in making certain we have the proper scope out.
Ashore we walked the paths of the island, with the wild sheep keeping well away from us. We have been here a few times before, but always enjoy its feeling of remoteness. And although it can attract lots of boaters, it never seems crowded. 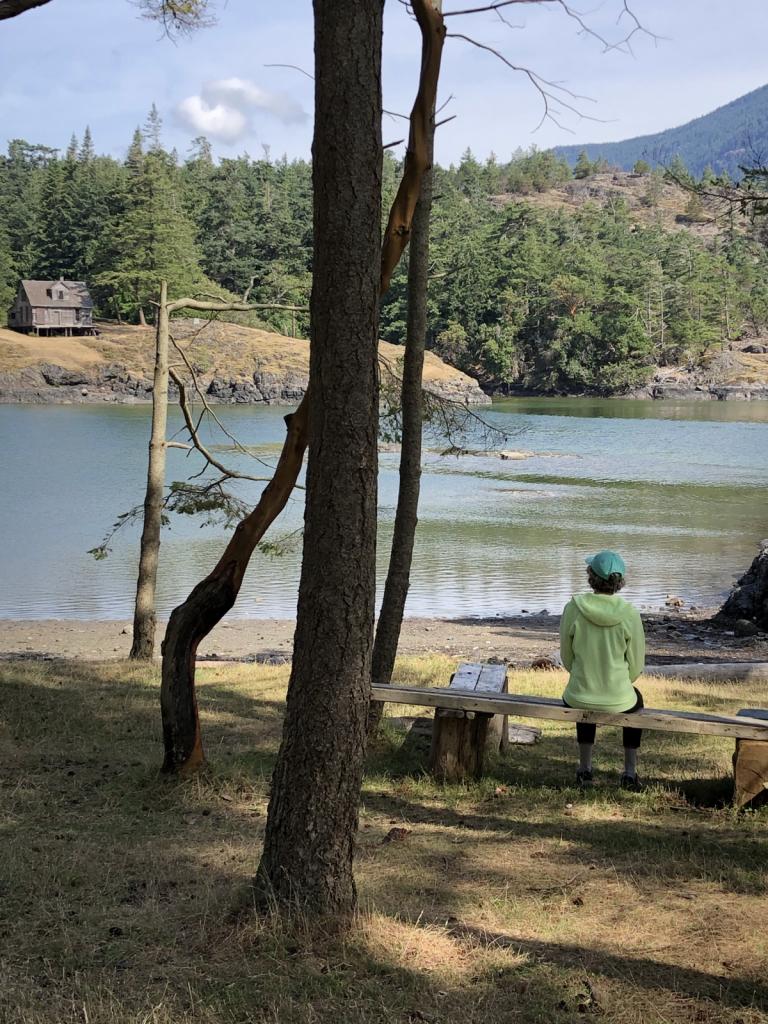 Next morning we were off to Pender Harbour to stock up for the remainder of the trip, meaning ten days of supplies. We anchored in Gunboat Bay, off the dock of Evie and Rolly Rolston, Whistler neighbours.
Ashore next morning, Evie took us up to her vegetable garden and with that we had all our vegetable needs for the trip! They they loaned us a car for more shopping in nearby Madeira Park.
To enter Princess Louisa Inlet means navigation the narrow but turbulent Malibu Rapids right at the mouth of the inlet. We chose our day by studying the current tables to find a day with slack current in late afternoon, giving us time to make the 45 mile trip in one day. So it was late afternoon when we approached the rapids. Because there is a curve in the rapids, you can not see the entire rapids before entering, so we called a "Securitay" on the VHF announcing our plan to enter. And luck we did, as a boat already in the rapids out of sight responded telling us they were exiting. So after they sailed out, we began our entry. Although not exactly slack, we were safely through followed by two other boats that had been waiting outside when we approached.
Although we didn't have time to look at it, we swept past the Malibu Club Young Life Camp, a luxurious camp perched on the rocks overlooking the rapids. 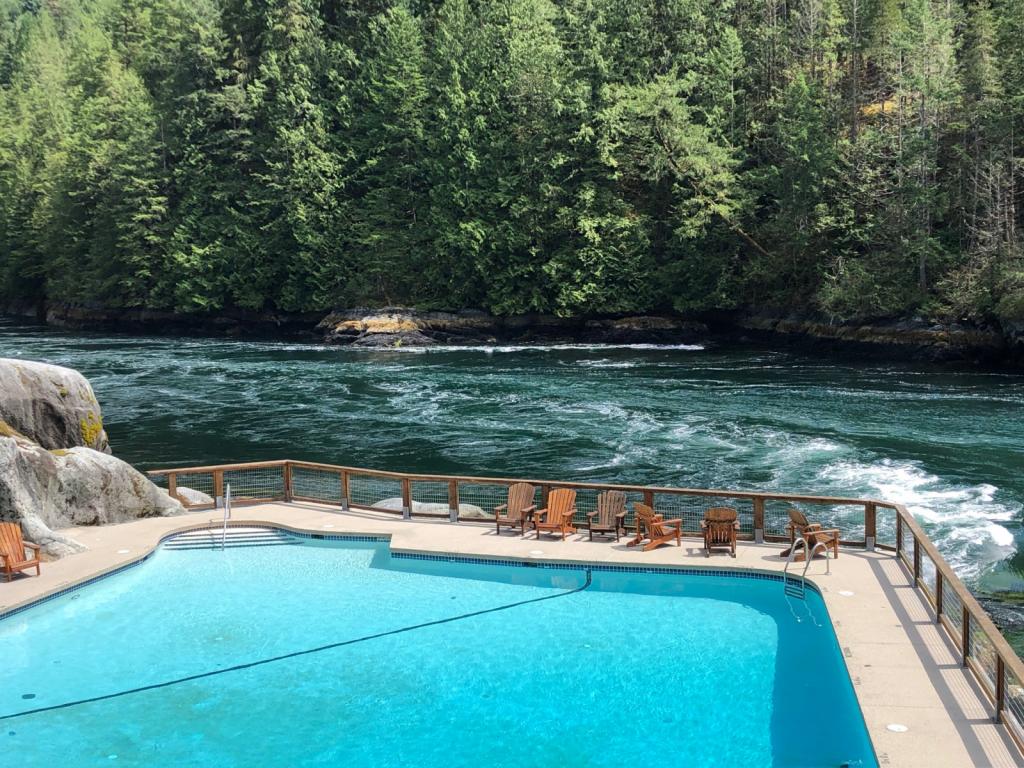 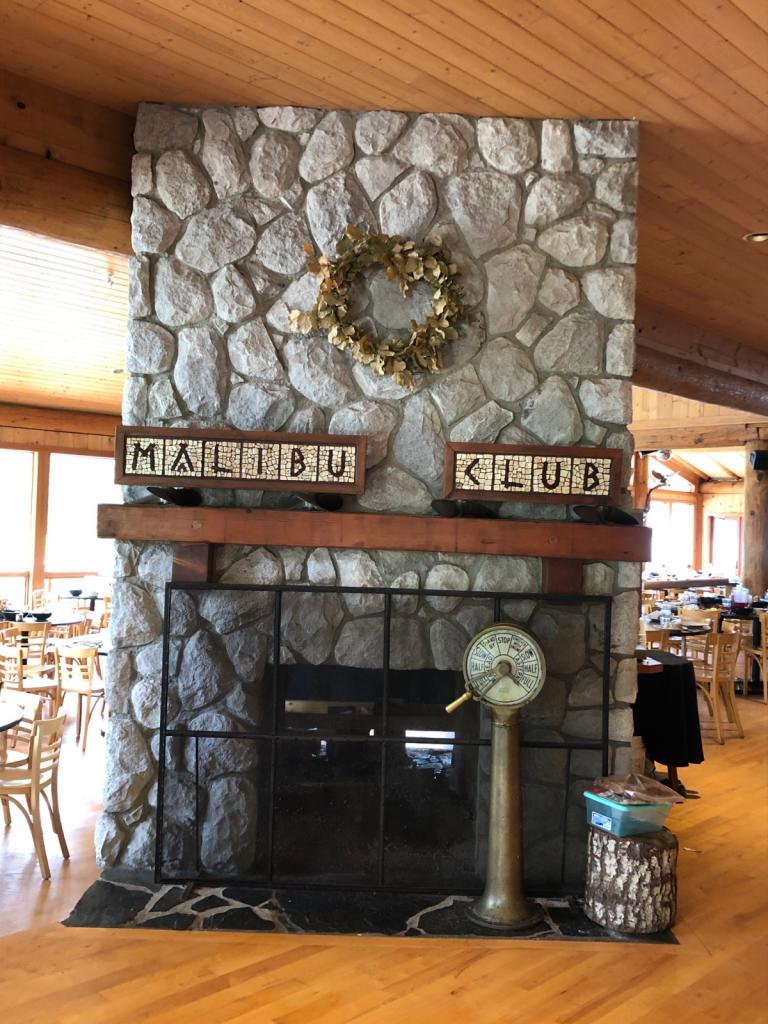 Inside the inlet we stared in awe. At its widest Princess Louisa Inlet is just over half a mile. From the rapids at the mouth to Chatterbox Falls at the head is just under four miles. With cliffs soaring straight up over a mile, the effect is spectacular. 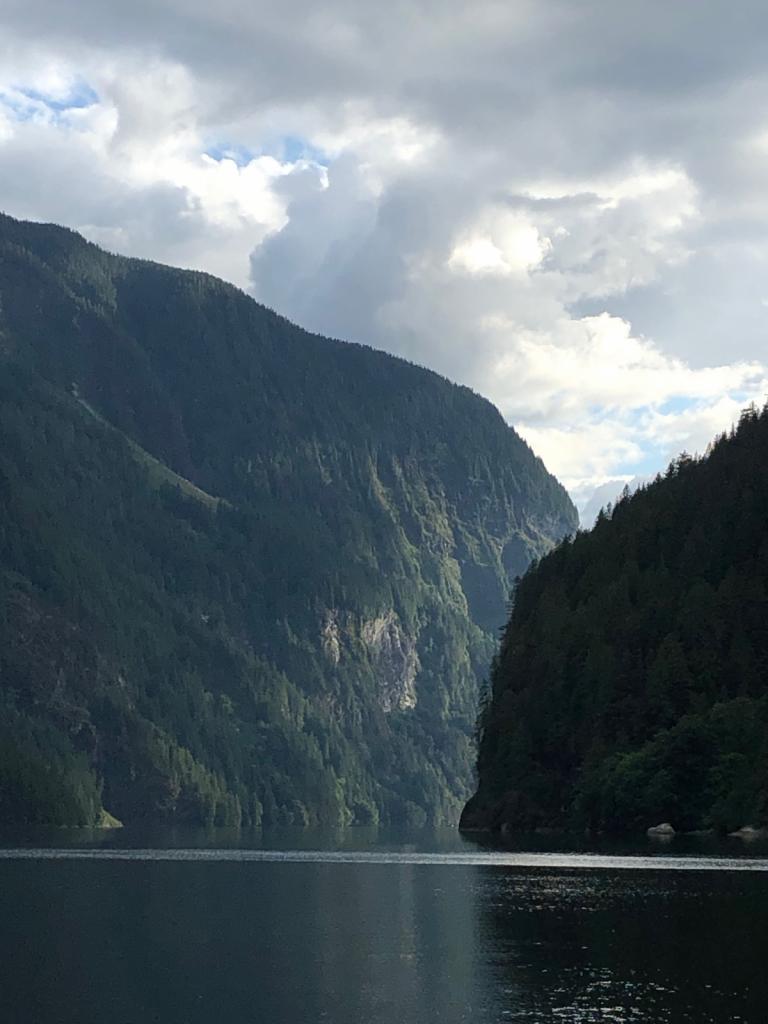 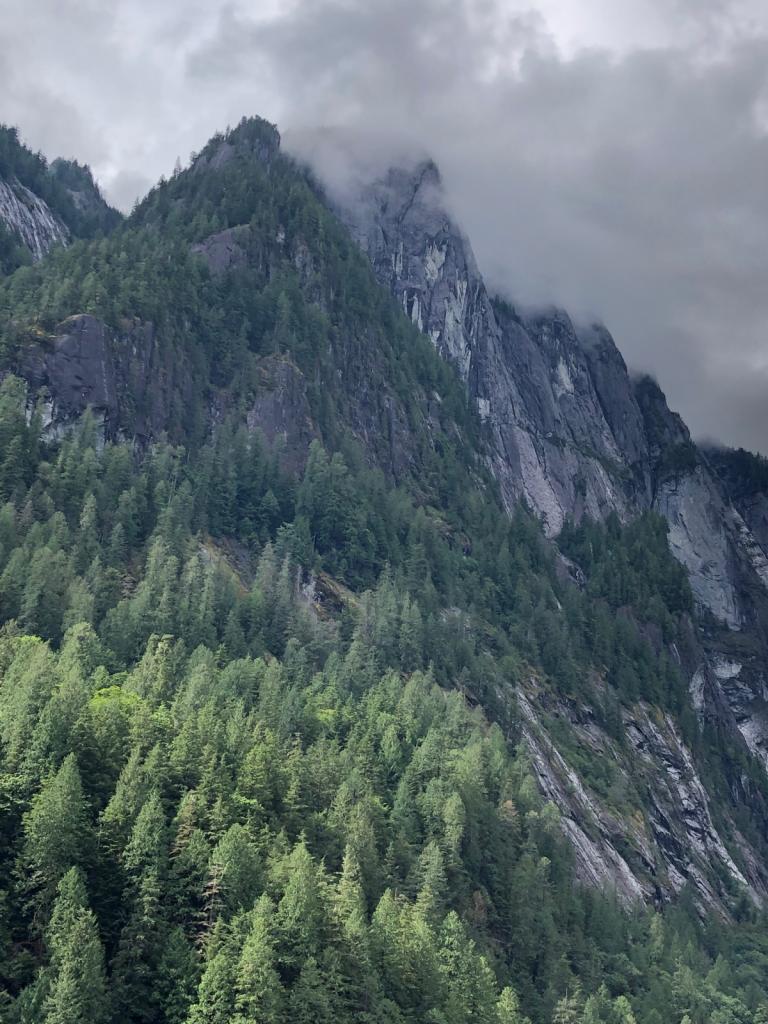 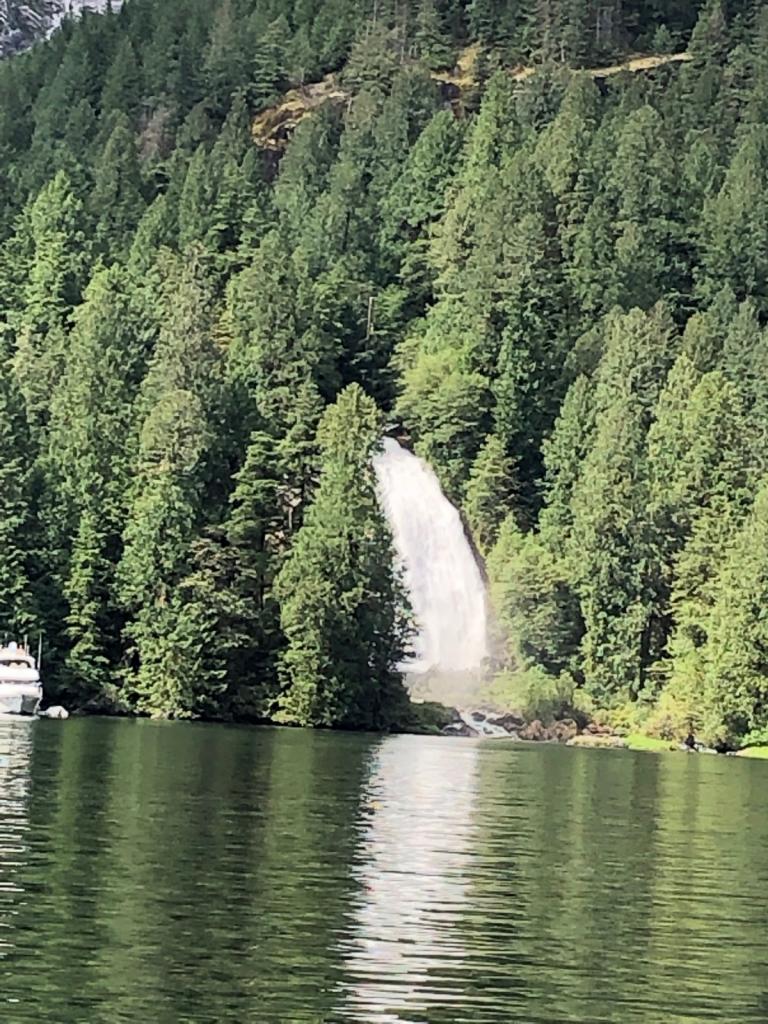 At the head of the inlet, there is a dock with a few short hiking paths ashore. Motoring up the inlet, we tied up next to a boat we had met in Pender Harbour a few days before, so we had helping hands to take our lines. Much of Princess Louisa Inlet is a provincial park, but not all. Dock fees are by donation, and a park ranger comes and goes from time to time. There are rules posted about garbage and noise, all seemingly adhered to on the honour system.

In two days, we kayaked around, hiked the small trails including one beside the falls with a sign warning not to go further or you might risk death, as others who ignored the sign did. We heeded the warning. 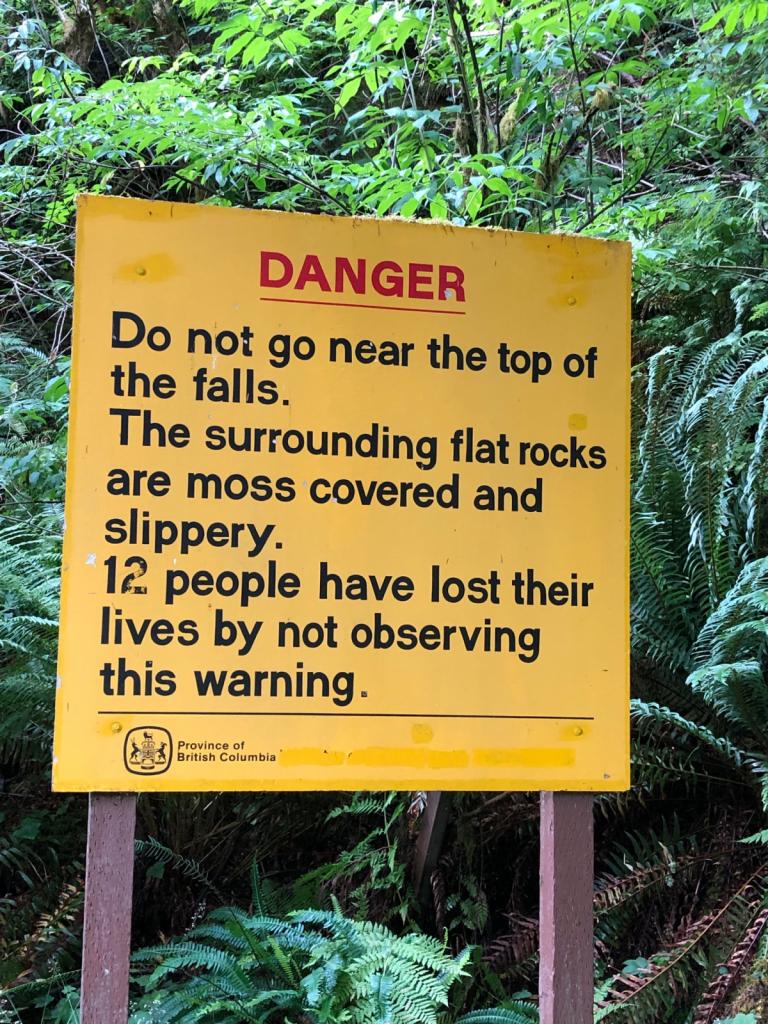 After two nights, we dropped our lines and motored down the inlet to a small mooring field with a dinghy dock and some larger hiking trails. We also took the dinghy down for a tour of the Malibu Club where we were warmly welcomed.
Next morning it was time to catch the morning slack at the rapids and head down towards Georgia Strait. In light airs we motored down Queens Reach, Princess Royal Reach and Prince of Wales Reach before heading in Sechelt Inlet to Backeddy Marina.
Backeddy Marina is well named. It is just one mile in Sechelt Inlet and two miles above Skookumchuck Rapids, the strongest rapids in BC. So currents at the marina can be strong. But the marina staff are well versed with docking and with their guidance, and three men on the dock, we were safely tied up in late afternoon.
We quickly hiked up to the nearby West Coast Wilderness Lodge to try to make a reservation for dinner, but too late, so we settled for breakfast the next morning.
It was now time to head for Desolation Sound to meet Kevin and Joanne, so we left the dock and across Malispina Strait to the docks of the Texeda Island Boat Club, where we tied up for the night.
Next morning we were off to Squirrel Cove on Cortes Island to meet Kevin and Joanne. We stayed in Squirrel two nights and went fishing during the day. 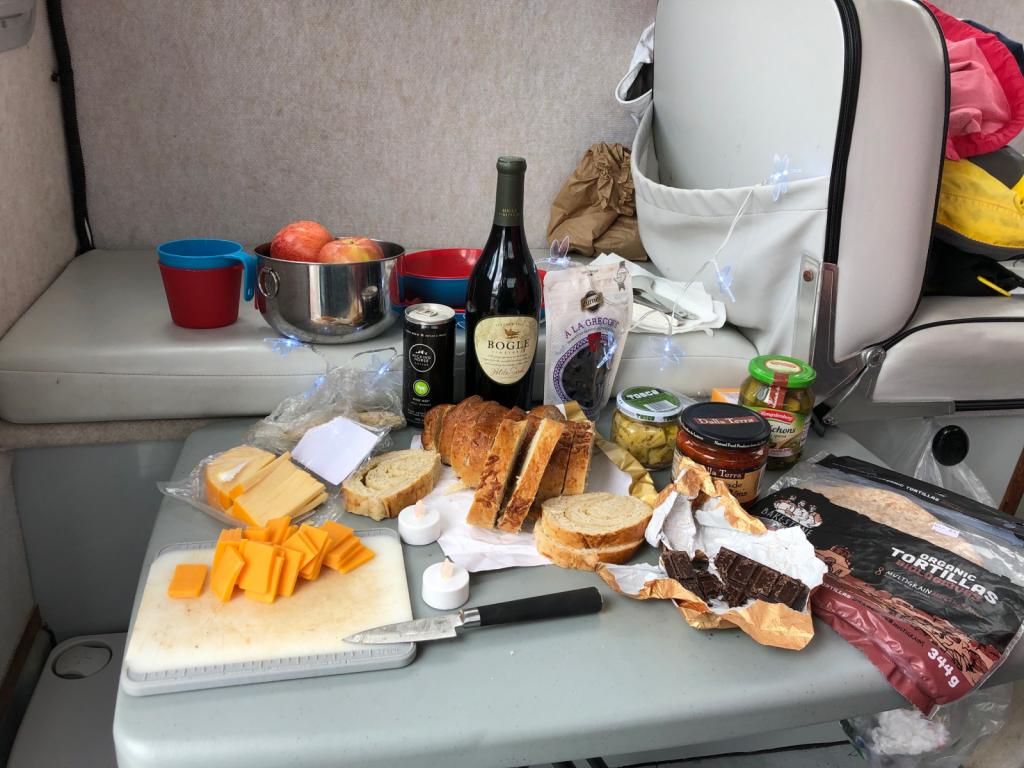 Joanne celebrated her birthday (a significant one) by catching an enormous Chinook Salmon that we had for a birthday dinner. 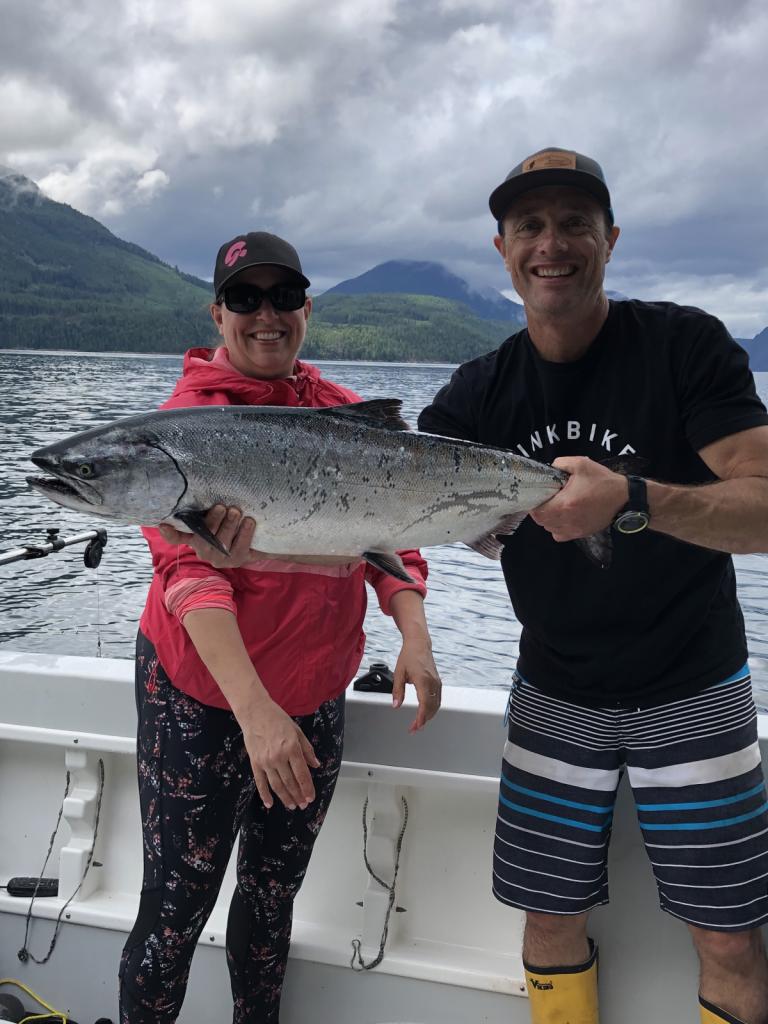 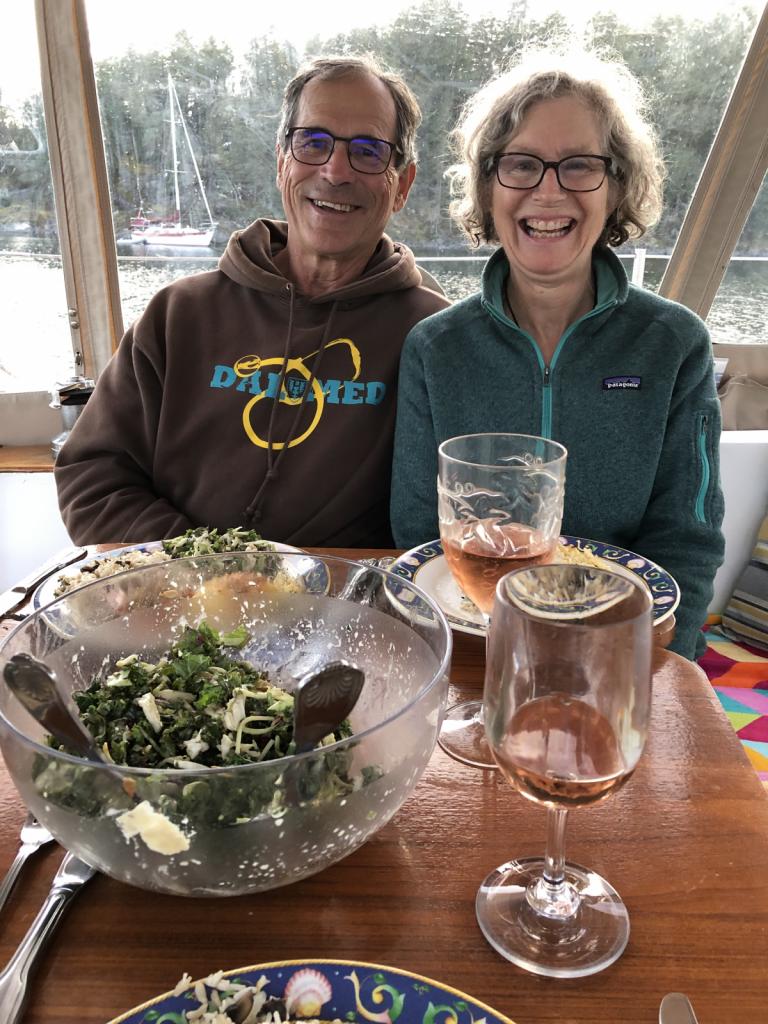 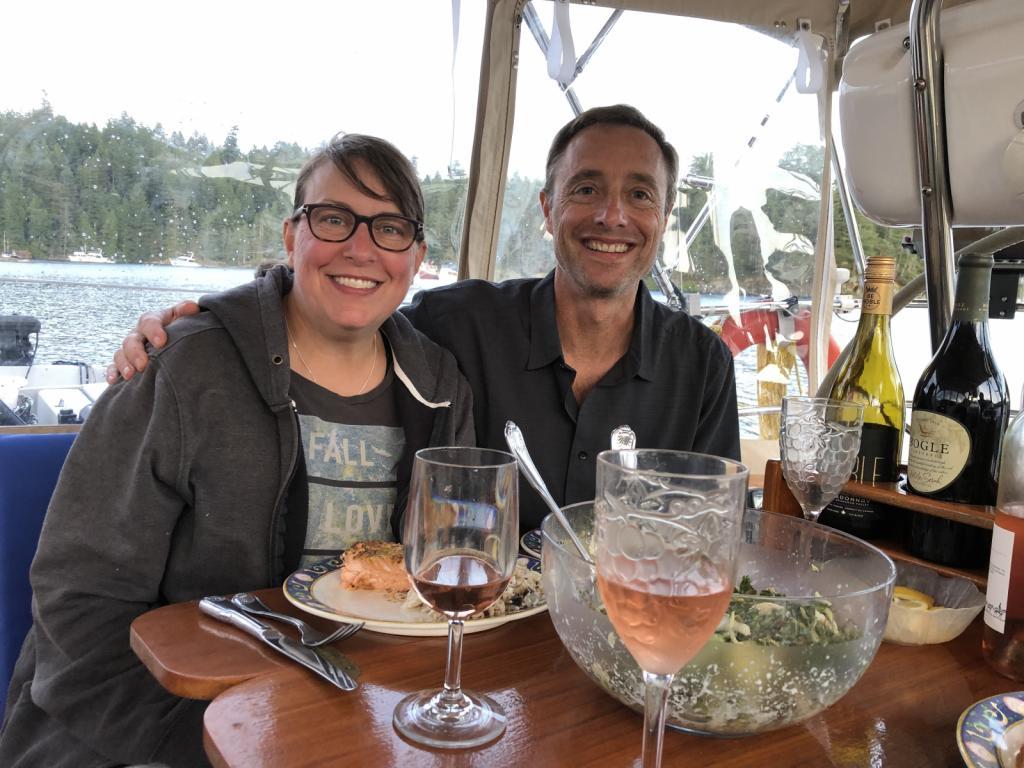 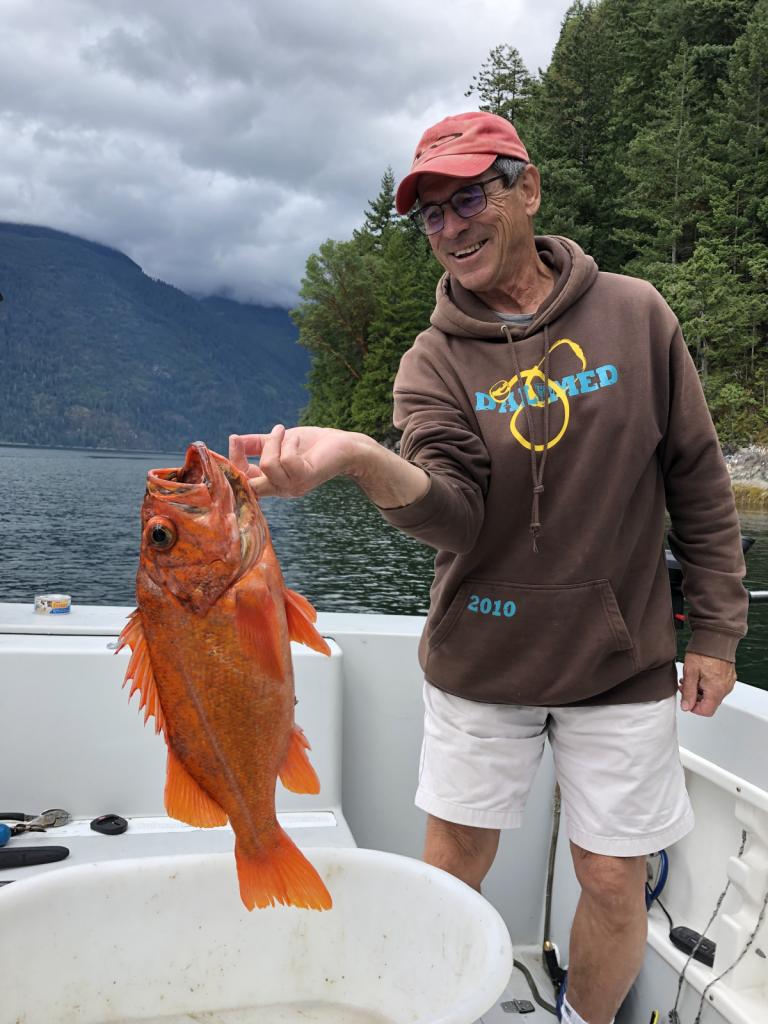 Next morning it was time to head back to Pender to meet our grandsons Ben and Ethan for a week cruising. As it is a bit too long for a single day, we again headed for Sturt Bay (home of the Texeda Island Boat Club) for the night. But this time, the club floats were all occupied, so we anchored in the north-west corner of the very sheltered bay. With six other boats in the small anchorage, we found a spot for our anchor and tied off to shore to reduce our swinging. Although this is a common technique in this area, we have not yet really mastered it, but are improving.
Next morning we were off down Malispina Strait in light following winds, prompting the spinnaker to come out. In mid afternoon we pulled in to Gunboat Bay and dropped the anchor. Backing down we nicely wrapped the dinghy painter (line) around the prop just as Kevin and Joanne motored in. As I prepared to dive on the prop, Kevin insisted on doing it. An hour later, with a very cold and tired Kevin, we were back in operation! 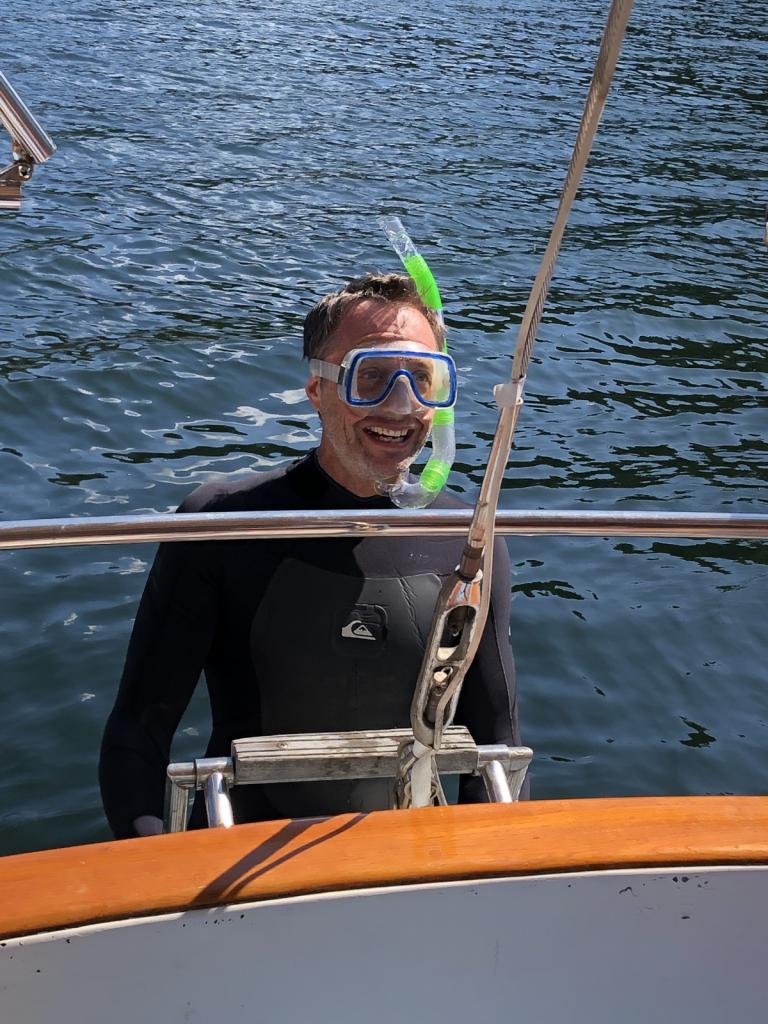