After Kevin freed our prop, we headed for shore. We spent the balance of the day and the next morning re-stocking and preparing for our visitors. Our grandsons Ben and Ethan were arriving for a week cruising with us. With their appetites, that meant lots of food, so that the cupboards and refrigerator were all full by the time they arrived in mid-afternoon.
Plans for the week were to head slowly from Pender Harbour across to Nanaimo and down through the Gulf Islands and meet their parents in Sidney.
After dinner, we were invited ashore by Evie and Rolly's neighbors for a campfire and marshmallow roast, a great start to the cruise.
In the morning we headed out of Gunboat Bay, through Pender Harbour and across Malispina Strait to Jedediah Island. Just a 16 mile trip, we rounded the southern tip of Texeda Island up Bull Passage and into Boho Bay where we anchored for the night. We chose Boho Bay for its shelter from the forecast north-west winds. By evening we had been joined with just six other boats in a large anchorage, lots of room for all. Anchored in 60' of water, we were glad of our chain counter, allowing us to be certain that we had he proper scope out. After some instruction, Ben and Ethan were handling anchoring duties. Arriving in early afternoon, we launched the dinghy and headed for Sunset Cove on Jedediah Island. Ashore we walked the paths looking for the wild sheep, left from the last permanent residents of the island. We saw lots of signs of sheep, but they kept out of sight as we crossed the island.Our only sightings were some bleached bones of a long gone resident. 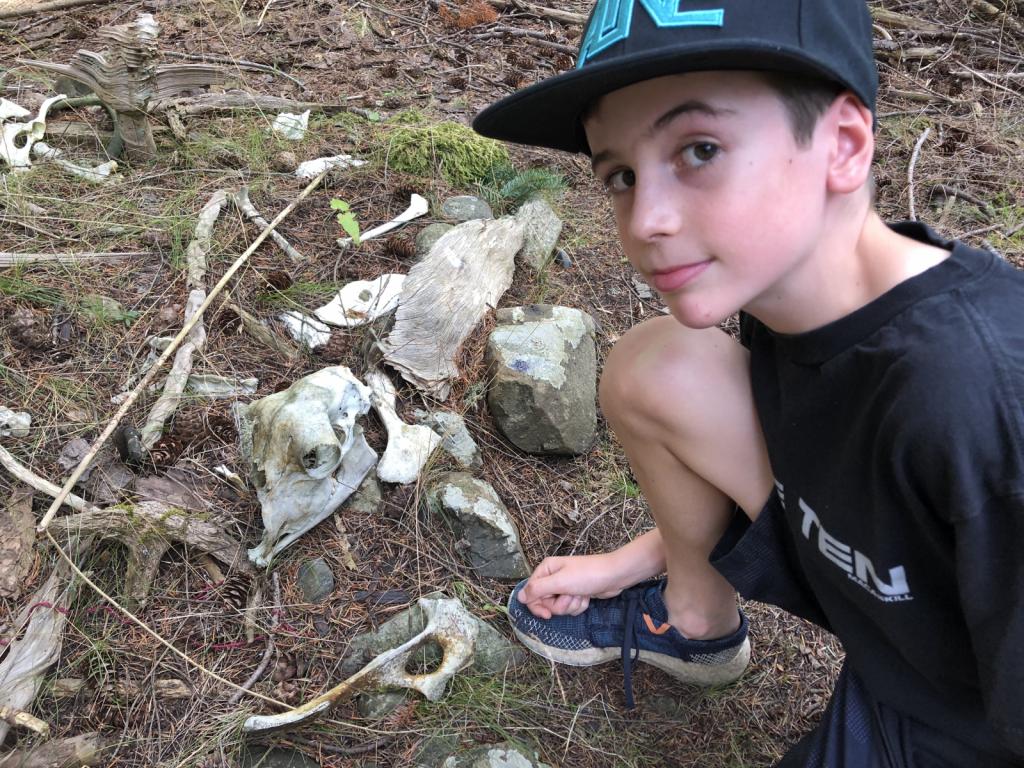 Back in the dinghy, Ethan took over the controls and took us back across Bull Passage to Boho Bay. 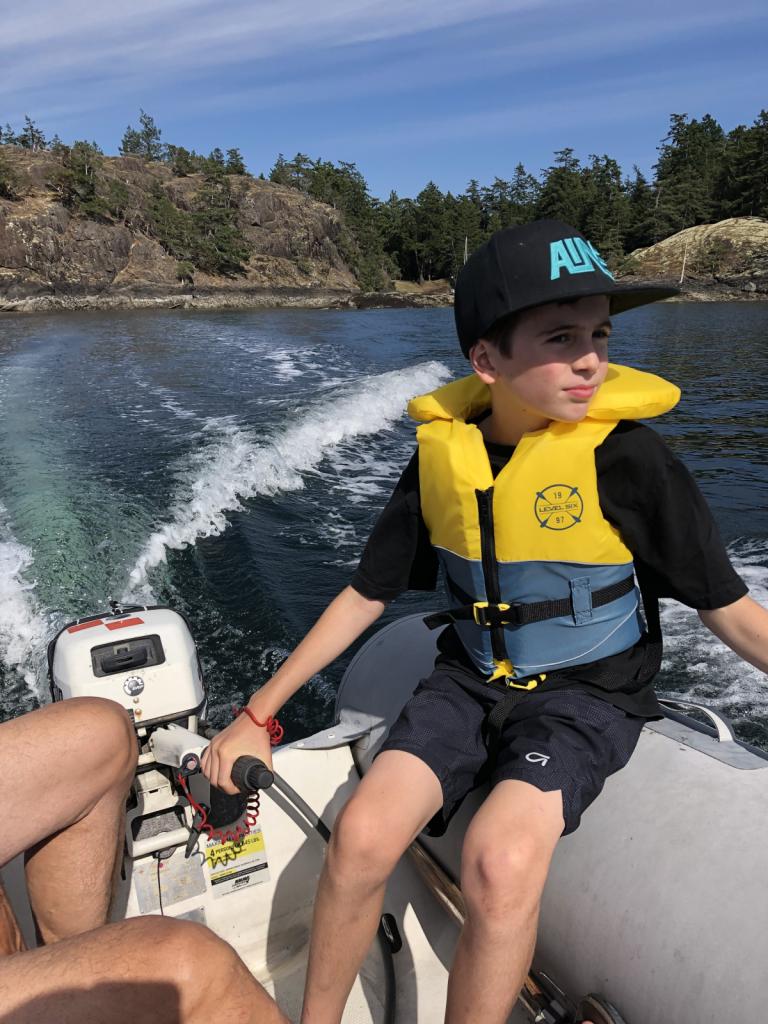 There was talk of swimming, but only Ben managed to get wet, and just barely. 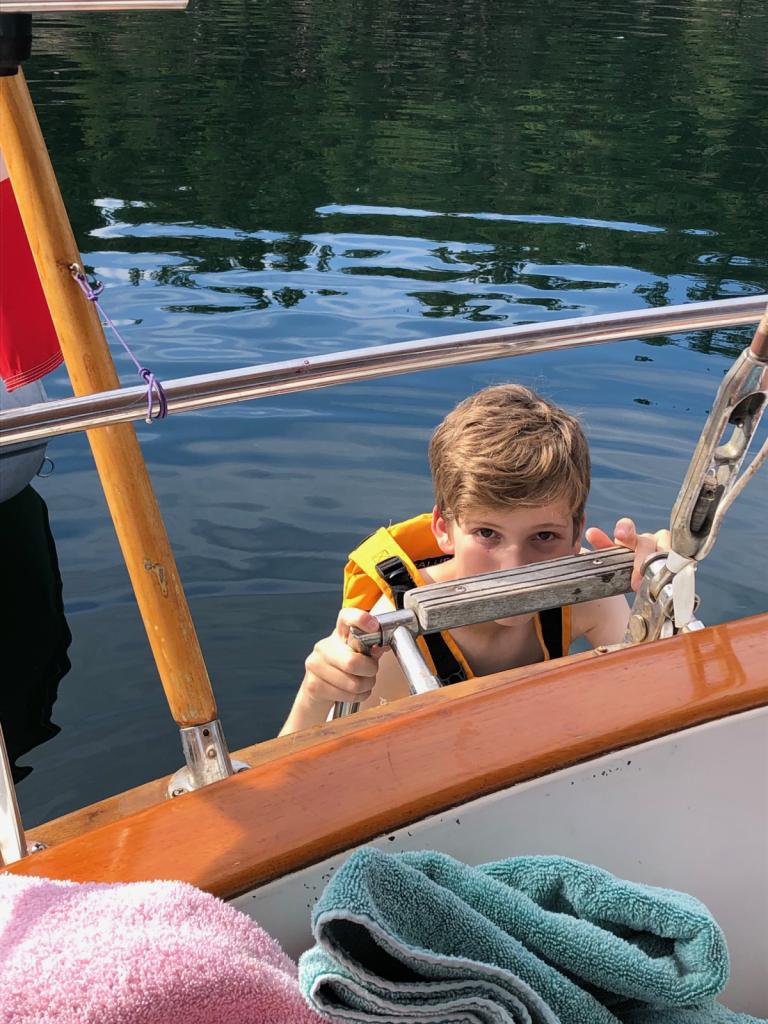 Next plan was put out the crab trap for the night using the head of Joanne's Chinook from the previous week (kept in the freezer).
Next morning we hauled a trap full of rock crab. But they were all too small to keep, so with great care to avoid the snapping claws, we dropped them over the side. 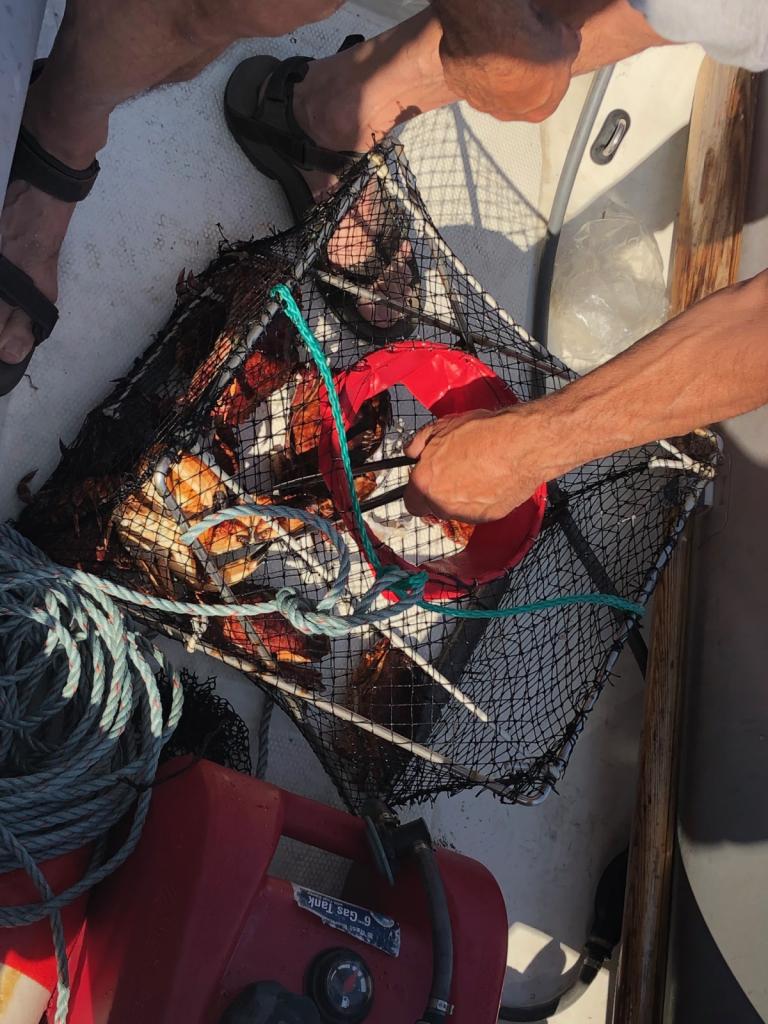 Anchor up, we headed down Bull Passage and around the south-west tip of Lasquetti Island. We headed SSE across Georgia Strait for Nanaimo. Like our trip north our course crossed the weapons testing area WG. Calling Winchesley Control, we were given permission to pass through. In a fresh SE wind, we were close hauled for the entire crossing, with just 2 tacks needed to lay the entrance to Nanaimo Harbour.
With the sails furled, we motored down the narrow Newcastle Island Passage lined with marinas and literally thousands of pleasure boats. At the southern end of the passage, we rounded up into the mooring field in Mark Bay where we picked up a mooring for two nights.
Newcastle Island is yet another of the many provinccial parks complete with mooring field, marina and dinghy dock. Ashore, Newcastle Island has a campground, small canteen (complete with ice cream), bike rentals and miles of trails.
At low tide, we walked the shoreline, checking out the tidal pools and skipping rocks. 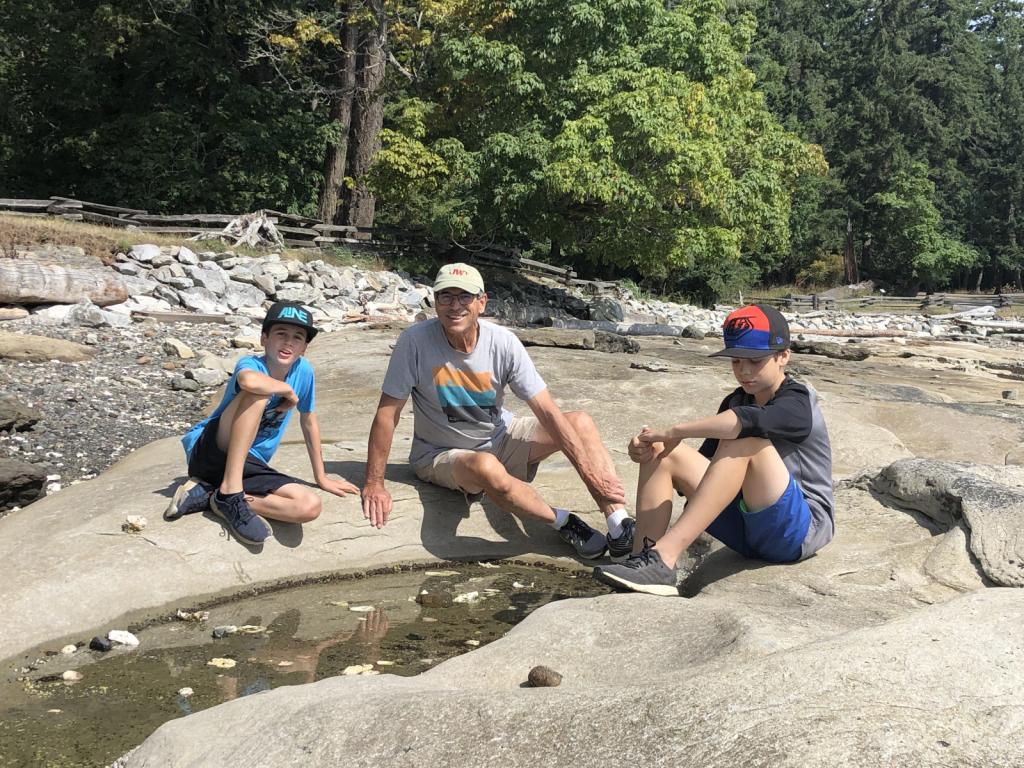 Next ice cream and a game of checkers on a large outdoor board. 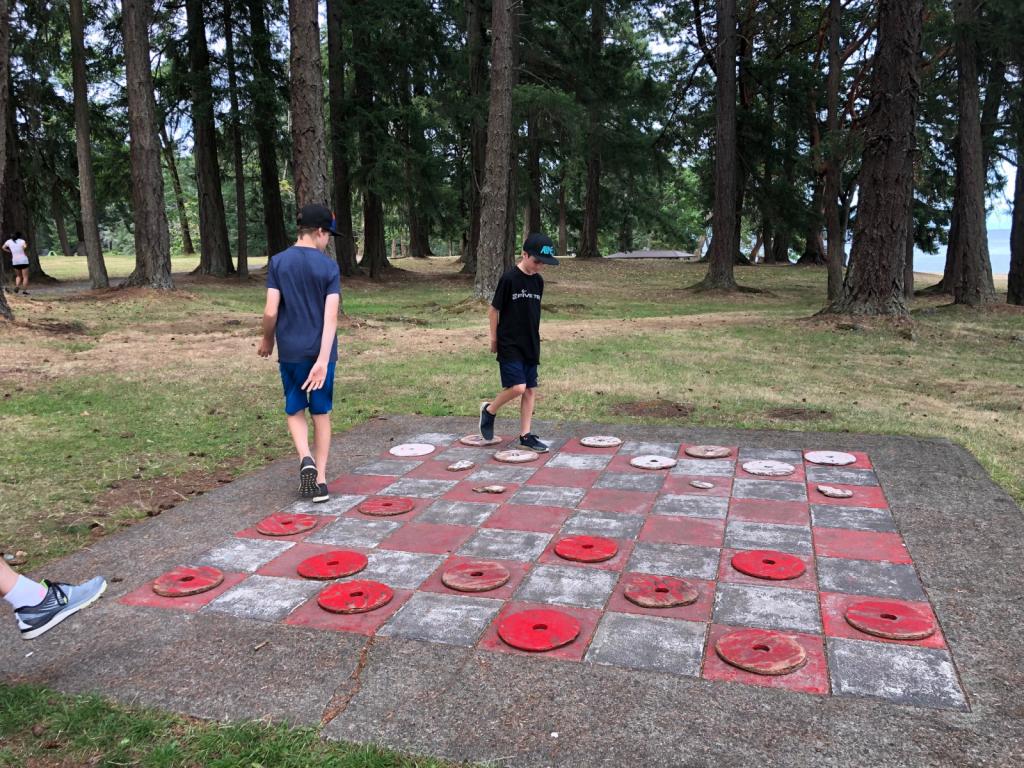 Next morning we rented bikes and took a trail around the island, a 2 hour trip. 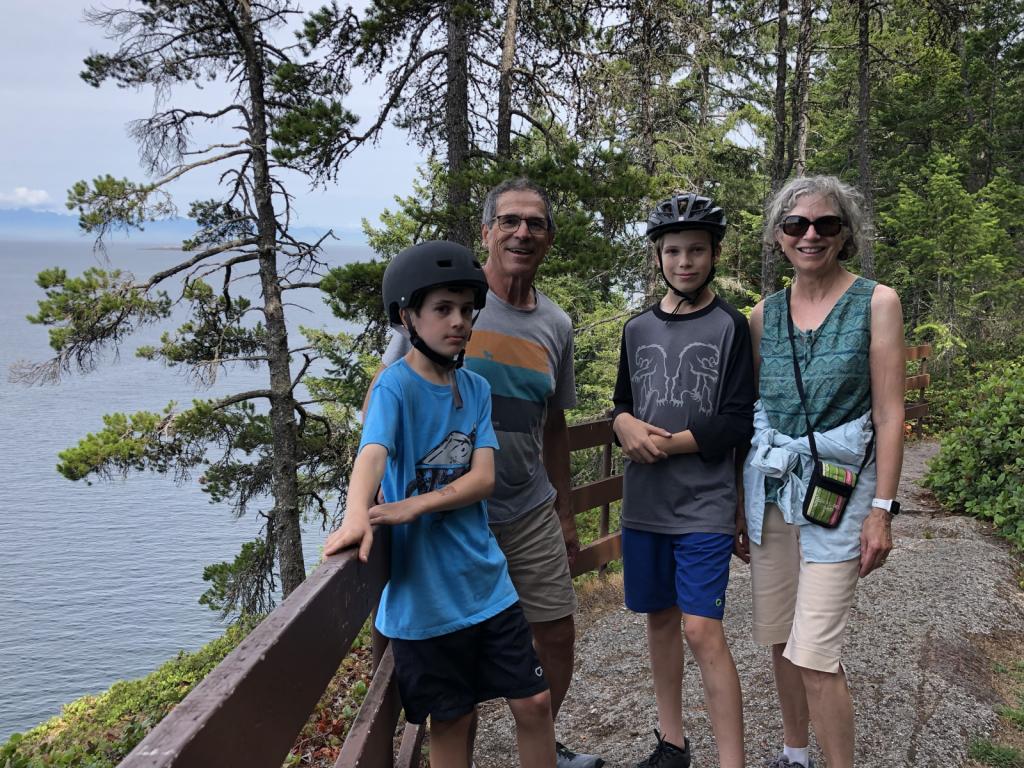 Across to the Dinghy Dock Pub for supper, then ashore again on Newcastle Island for ice cream for dessert. 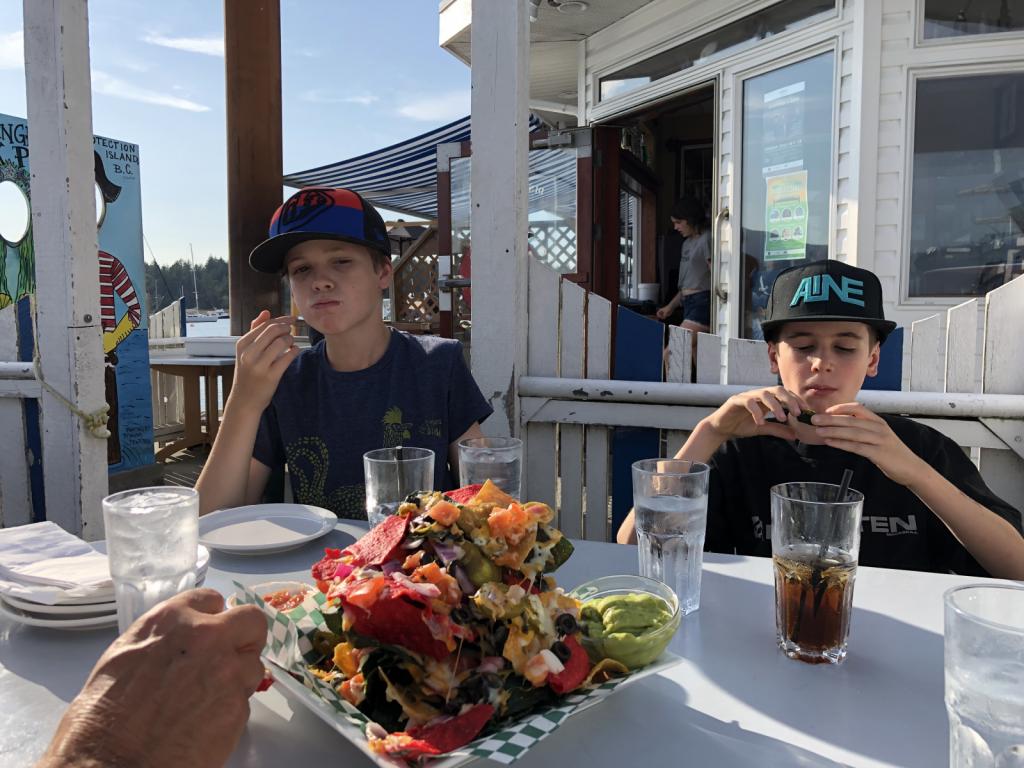 Next morning we were headed down into the gulf Islands. From Nanaimo, getting into the Gulf Islands requires passing through Dodd Narrows. Dodd Narrows is yet another set of tidal rapids that can only be transited during a 15 minute interval around slack. And to complicate this one, it is frequently used by tugs towing large log booms to the mill in Nanaimo Harbour.
Checking the current tables showed slack at 0956 hrs. With six miles to the narrows from our anchorage, we dropped the mooring just before nine. We have finally learned to trust our calculations and not rush out of the anchorage when we see others begin streaming out.
Arriving at slack, we made another "Securitay" announcement of the VHF to assure we wouldn't meet any surprises in the very narrow passage, and we were through and into Stuart Channel.
The Gulf Islands are a group of islands along the south-east coast of Vancouver Island. Sailing conditions inside the islands are distinctly milder than on Georgia Strait, and we enjoyed the light winds and sunshine sailing as we slowly made our way down from Stuart Channel into Clam Bay for lunch. In the dinghy we motored through the very narrow cut between Thetis and Keuper Islands into Telegraph Harbour. At the north end of the harbour we watched two model sailboats tack back and forth across the harbour. They are tethered to wire below the surface that they follow to one end, tack and sail back. Ashore at Telegraph Harbour Marina, more ice cream servrd. Then back aboard Estelle and
across to Trincomali Channel and into Montague Harbour, another provincial park with mooring field and dinghy dock. We anchored just outside the mooring field and dinghied ashore to the park for a hike.
In the morning, we went back ashore with Ethan's fishing rod and a "stick" rod for Ben. Our targets were the tiny bait fish that swam around the dock. We secured bait by cutting off a very sticky and slimy tube worm under the float. Two hours later we had caught and released countless tiny fish 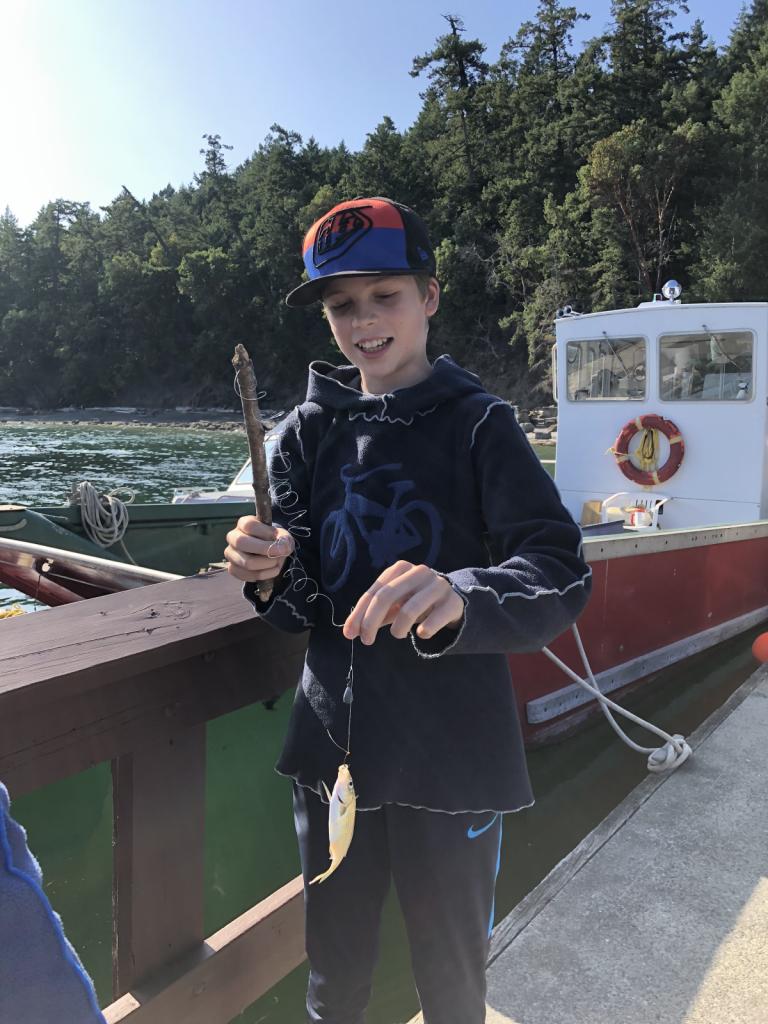 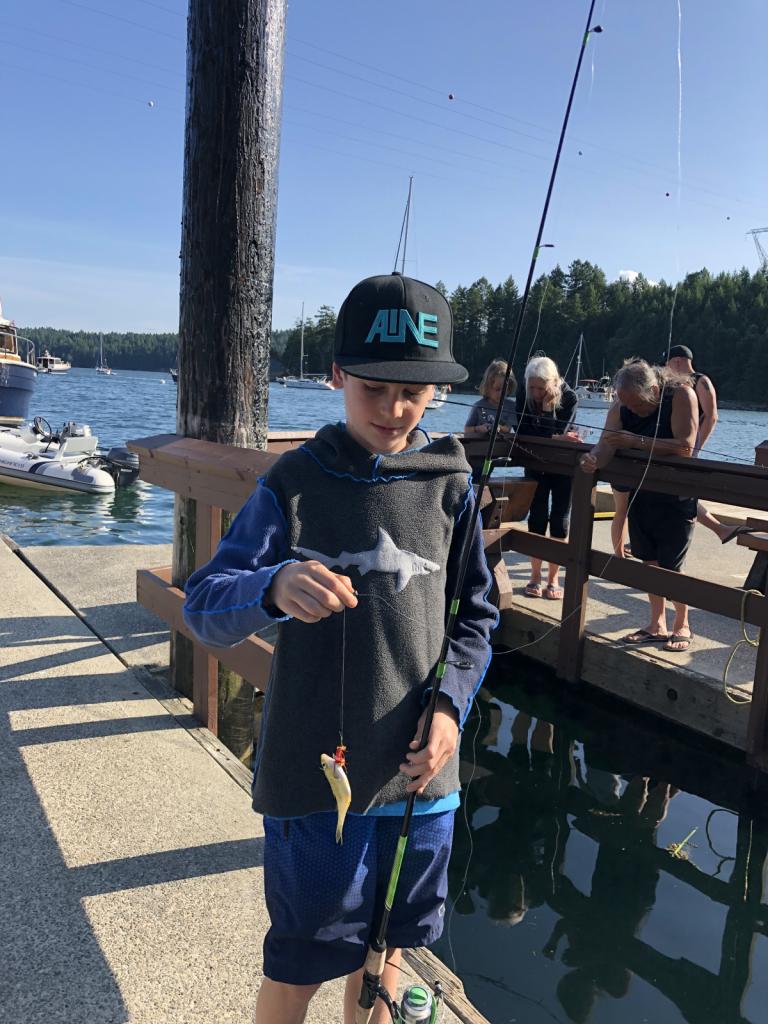 Then, off again, this time to nearby Ganges on Saltspring Island.
Mid July is peak boating season in Ganges, one of the most popular destinations in the Gulf Islands. Rather than try to find space in the marina or crowded anchorage, we anchored in nearby Madrona Bay with just three other boats in the large anchorage. From our anchorage to the Ganges dinghy dock is just over a quarter mile, yet boaters seem to insist on crowding into a tiny anchorage as close to the dock as possible, leaving us lots of. room next door... not sure why.
Ashore for dinner at The Tree House and after... ice cream. 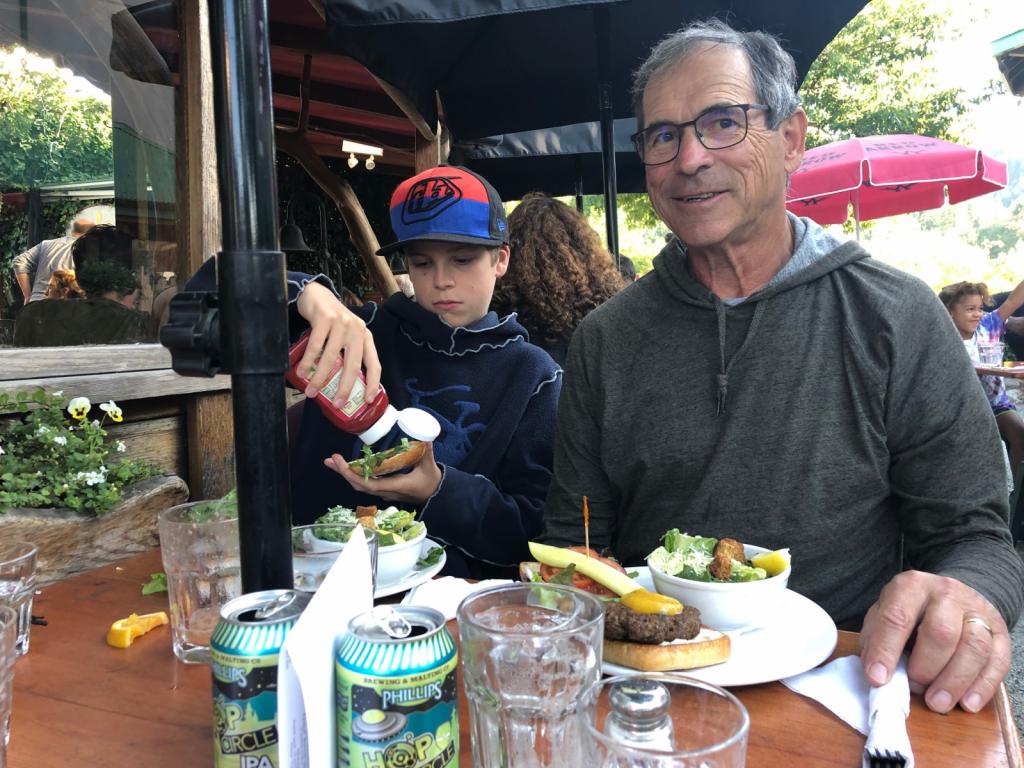 It's been an ice cream trip. Only in Boho Bay, with nothing ashore, did we miss a day.
Next morning marked the boys last day aboard. We raised the anchor and set out for Van Isle Marina in Sidney. Out in Captain Passage, we hoisted the sails and enjoyed a light air sail through Moresby Passage past Portland and Coal Islands where we rounded up and dropped the sails. Motoring in to our assigned slip, we were secured to the dock at 1620 hours, cruise over.
Next morning we walked up the dock to meet Andrew and Meghan and we were left with a strangely quiet boat.
More
Comments
Newer Older
Contents