July 10th to 25th Desolation Sound
We left our berth at the Rowing Club at 1000 hrs, catching the outgoing current to sweep us out the harbour northward. In English Bay, we found a bumpy ride as the light north-west breeze fought the outgoing current. But our plan for the day was just a short 20 miles to Plumper Cove, where we picked up a mooring and settled in. In the warm sun, we took the dinghy ashore and hiked the park trails.
Next morning we were off north again, destination Pender Harbour. In mid-afternoon, we were anchoring in Gerrands Bay, a first for us. With our outstation dock full, we decided to explore this area. Although we have been in Pender Harbour many times, we had never looked into this small protected bay. Circled with docks, and a few anchored boats who had obviously seen better days, we were one of only two cruisers. We thoroughly explored the area by dinghy, including a short walk to the shore-side trails of Francis Point Provincial Park.
After a leisurely start to the morning we took the dinghy over to the public dock at Madiera Park and topped up our grocery supplies. Back aboard, we got underway over to John Henry Marina to top up fuel and propane. Well stocked, we motored out into Malispina strait in early afternoon into more light northerly winds. No sailing today. Our destination, Ballet Bay, was just 12 miles away. Entering, we found the anchorage nearly empty. In a "normal" mid-summer, this anchorage can easily have 20 boats in it. But today, we found only two other boats. We had read about a trail ashore leading to Hidden Basin, so set out to try to find it. Although not well marked and obviously not well used, we did work our way through to a recently graded road. Not sure which way to go, and concerned about trespassing on private property, we wandered for a while, then decided to retreat and do more research.
Next morning we headed north again, and again in light northerlies. Late in the afternoon, we motored into Tenedos Bay only to find it too crowded for our liking. With the closed border, we expected to find much more room, so headed out again. Heading for Prideaux Haven, we rounded Otter Island and peered in at the tiny anchorage between it and the mainland. We found excellent anchoring depths, but after repeated anchoring attempts resulted in kelp balls on the anchor, we gave up and headed on. Again to our surprise, Prideaux Haven was far from empty, but there was room for us to anchor comfortably for the night.
Next day we headed for Roscoe Bay, but not before carefully checking the tides to be sure we had sufficient water to get across the bar, which shows 2' at a zero tide. Safely in, stern tie secured, we waited for the arrival of our Whistler neighbours, Kevin and Joanne in their Osprey, Ocean Fog.
Next morning we all set off for a day of fishing, returning in the evening with a beautiful Chinook for dinner. 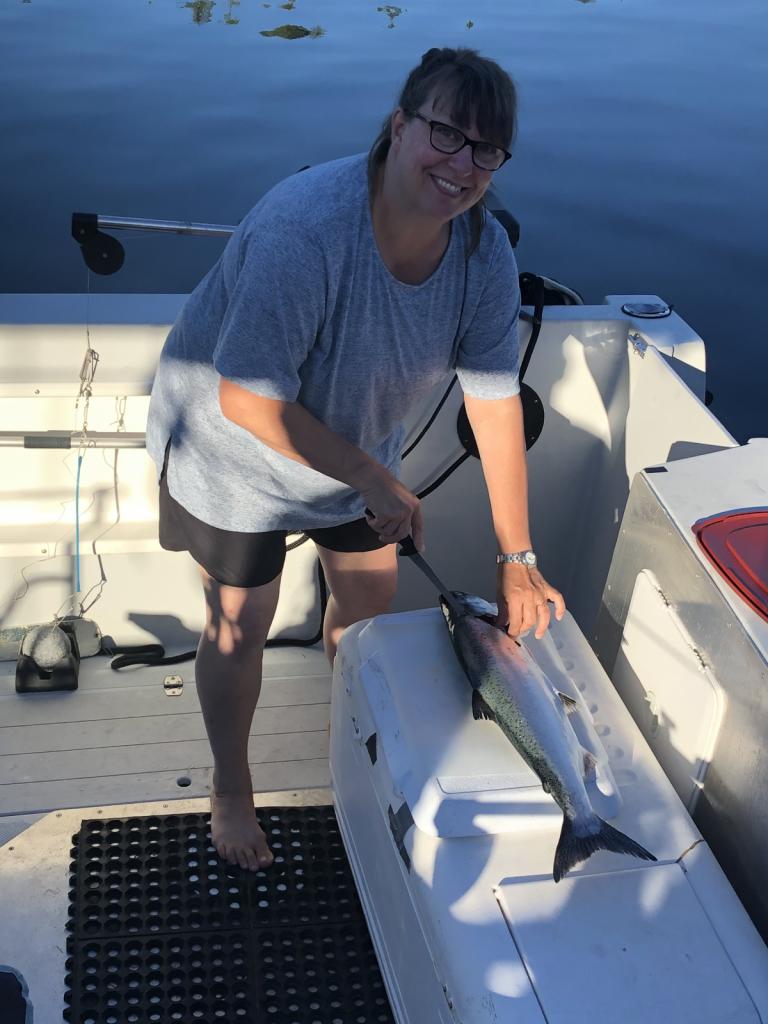 From Roscoe Bay, we headed across to Squirrel Cove where we stayed for three nights, hiking and fishing. But we were also heading ashore daily for ice as our refrigeration had died. That required some impressive cooking, as all our frozen food had melted. So we had plenty of lunches prepared!
After a few failed attempts to diagnose the problem, we decided to head to Campbell River for some professional help. This was our first trip to Campbell River, and we were impressed. Securely tied up in the Discovery Harbour Marina, we arranged for a refrigeration mechanic.
Ashore we found a very impressive waterfront development with everything the cruising sailor could need... groceries, wine/beer, restaurants all within a 3 minute walk from the marina. And also a boatyard with a 60 ton travelift!
After a couple of hours poking and sniffing, the technician decided that the controller was faulty, causing the compressor to shut down. I had a spare that I was ready to install when it came to life, so decided not to tempt fate, and off we went, enjoying an excellent sail in 15 knots of wind back to Cortes Bay.
Fully stocked, we were looking at the currents in Cordero Channel. So next morning we headed north to Von Donop inlet to stage for our run through the rapids.
More
Comments
Newer Older
Contents