July 27th - July 29th The Back Route
It was time to go. The forecast for Johnstone Strait was for light south-westerlies for three days. And we had been checking conditions at Fanny Island for the last few days, seeing light morning winds, so conditions looked good.
From Von Donop to the Yucultas is 16 miles. With slack at 11:05, we set out up Calm Channel motoring in a warm sunny morning. No matter how many times I check the current tables, I always feel a sense of relief when I see other boats heading in the same direction. By the time we reached the beginning of the rapids, we were third in a line of six boats travelling north.
Through the Yucultas and Big Bay entering Gillard Passage, we could sense the beginning of the ebb. From Gillard Passage to Dent Rapids is just 2 miles. However, slack at Dent is 30 minutes earlier than Gillard, so as we passed through Dent, we could feel the current building. But all was well as we were swept into Cordero Passage, with the strongest rapids behind us. Sealions in Gillard Passage
Today we were headed for Chameleon Harbour in Nodales Channel. Heading down the channel, we decided to look into Hemming Bay on the east shore of East Thurlow Island. We were interested in hiking up to Hemming Lake, however the profusion of "No Trespassing" signs discouraged us.
Inside Chameleon Harbour, we looked into Handfield Bay. It can accommodate two or three boats in excellent protection. But we decided to anchor just outside, setting the anchor in the lee of Bruce Point in 25' and excellent holding in mud. A short walk around tiny Tully Island, and it was time for dinner.
Next morning we were off to a late start, retrieving an empty prawn trap as we headed back up Nodales Channel to Cordero Channel,. Passing through Green Point Rapids two hours after slack, we were swept through with a 2.5 knot current boosting us. By the time we turned up Wellbore Channel into the Whirlpool Rapids, we were just at the end of the ebb, with less than 2 knots pushing us north towards Forward Harbour.
In Forward Harbour we found two other boats already at anchor. By days end our fleet had swelled to seven. Taking the dinghy ashore, we found a trail across to Beesborough Bay, looking down into Johnstone Strait nine miles to the west. 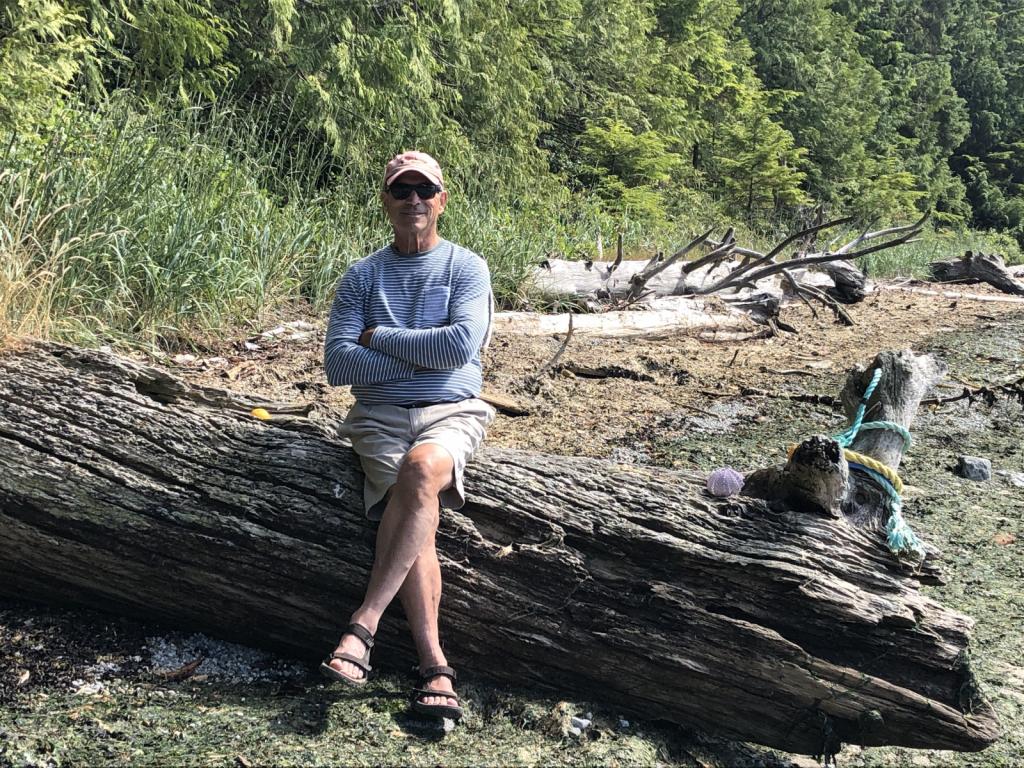 Beesborough Bay Beach
In the evening I hoisted a crab trap full of undersized crabs, all tossed back.
One last check of the weather, and we were in bed early. Next morning, we had the anchor up at seven and underway down Sunderland Channel, passing tiny Fanny Island as we ran out into the glass calm of Johnstone Strait. Just before noon, we turned in to Havannah Channel, passing Port Harvey and the former Port Harvey Marine Resort. Although the marina is closed, boaters are welcome to tie up.