Day Four of the Windy Tour Okay, let's back up. We drop off a computer whose screen just dropped dead and needed a new mother board in Key West BEFORE heading to the Dry Tortugas. We were told once the part came in it would not take any time to replace. Well there is the hitch......"once the part comes in". They are finally repairing the computer after waiting now two weeks for "brown" to deliver. Seems the weather in Texas and COVID are still the underlying issues. Our problem now is that we cannot get to shore to pick it up.

If you watch weather......something we sailors do quite a bit.....you will see a pressure system that has caused some 18 to 30 knot winds with seas anywhere from 4 feet to 11 feet in this area. With news of the upcoming front we knew the anchorage we were in was mainly coral with some mud and grass. In pleasant conditions, it is a pleasant anchorage. With winds blowing a steady 20 knots or better, you might find yourself on anchor watch all the time as you will tend to drag. We felt we had her set pretty good as we backed down on the anchor at 2000 rpm more than once but with a forecast of six days at steady 20-30 knot winds we were a bit nervous. As luck would have it, a mooring was being vacated Saturday afternoon and we elected to grab it before someone else could. It was a mission that needed precision as the mooring had no pendant. Greg would be in the dinghy and I would drive Ti Amo to the ball. It was a perfect execution.....everything fell right into place and Ti Amo was on a mooring. Yay!

We went into town on Sunday to enjoy some of the local flair before the winds were forecast to begin. Our computer now at the earliest would be Tuesday before it would be ready as the part would not get in until after 3 on Monday. So off we go to enjoy some of the town. With a few miles under our feet we sit and enjoy lunch at Mr. Z's......the famous Philly Cheesesteak place in Key West. Our next stop would be at the Flying Monkeys Saloon for a mango rum daiquiri. Treat..treat....treat. Yes there was a third stop and it was the best.....Haagen Dazs ice cream. Wow! Good thing we are walking! Off and back to Ti Amo where the treats come to a grinding halt.

We have no TV reception here, our entertainment consists of reading, cross stitching, puzzles or watching our phones. When we had a computer we could at least catch up on our television or watch a movie. Oh well, we turn in early as the winds are picking up and pray for a little sleep. Little being the key word. The winds were out of the west then north and would veer to northeast and then finally the east. Their intensity would grow from the mid teens to a steady 25 or more in knots with gusts in the mid 30's. It was a rocky night and not much sleep would happen. The radio chatter was all about people dragging at anchor. Boats dragging and heading to shore or hitting someone else. The coastguard would be hailed time and time again.

Then it happened. A loud crash and feeling something slamming alongside us. Greg ran up to the cockpit and announced we had a situation. It was 5 am! I throw on my slacks and shoes and run up the stairs to find a boat loose from it's mooring and it is beating alongside of us. Greg found that the anchor was lodged up against ours and the only way to free it was for him to push with his feet while I used the bow thruster to send us away from it. Remember we are tied to a mooring ball so we cannot just drive off some where. As luck would have it Greg freed the anchors and the rogue boat bounced down our starboard side hitting us at two places pretty good but at least missing the solar panels. Next to check the bilge and hop in the dinghy to look for damage to the hull. The coast guard was notified and the boat was found within a half hour on the lee shore. Ti Amo was fine with some scratches and gouges in the toe rail but very, very fortunate. We spent the rest of the morning talking with Florida Game and Inland Fisheries as well as the mooring field operators and yes even the stray boat owner.

We are very fortunate! The folks who have responded have all been great and we are just thankful the damage is cosmetic. That was just the first night and now we are on day four. We are thankful everyone else is holding up okay with this crazy wind.
More
Comments
Newer Older
Contents 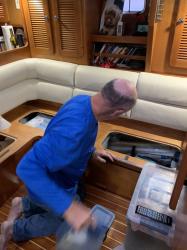