In early August, providence finally released us from our encumbered circumstances at home, allowing us to go cruising again. We did our usual run to Costco and the grocery store, cleared out our home refrigerator and began the process of loading Huzzah. I always think this step takes a couple hours, but it probably takes 3 - 4 times that long - much longer than I ever remember or plan for. Just locating all our cruising gear unique to the Salish Sea (like crab traps, stern-tie ropes, clam shovel, wool blankets, etc.) took forever. As it turned out, I failed at this and left both sets of my freshly cleaned foul weather gear at home! Oh well, I haven't seen any rain since returning from Hawaii anyway. How ironic is that?
After a full day of loading Huzzah at the Jerisch public dock in GH, we finally departed under a formidable layer of smoke that limited our visibility to just a mile or so as we motored in flat calm water. As veteran NW cruisers, we know a thing or two about fickle summer winds, and since there's no fuel dock in Gig Harbor, our first stop was Des Moines Marina. From there, we motored north, spending our first night in Blakeley Harbor, before arriving the following day at our favorite crabbing hole at Garrison/Westcott Bay on San Juan Island. 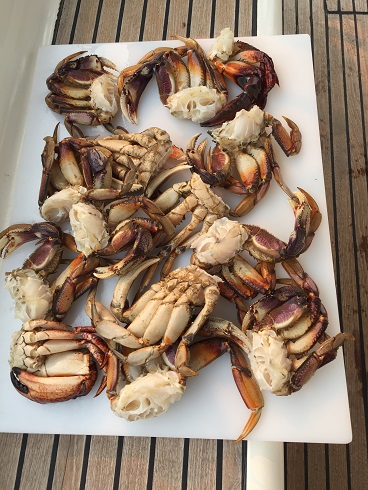 After catching our limit for two consecutive days, we'd had enough crab and moved on. By this time the Westerly onshore winds had returned to push the forest fire smoke inland, a welcome respite for Jody. Our biggest surprise was how cold the westerly winds coming off the ocean were! While the radio talked of record setting high temperatures, we were bundled in fleece as we traveled the sound. Fortunately, once we move north of the San Juan Islands, things did warm up considerably. After Garrison Bay, we spent a couple nights in Roche Harbor which afforded us comfy showers and Gerry an invigorating bike ride around the Island.
Eventually, we connected up with friends cruising on a parallel schedule, while regrettably missing others that were on their way home already. Prevost Harbor on Stuart Is. has always been a favorite stop for us, and this year we met up with Bill & Debbie there and did the 4 mile hike to the Turn Point lighthouse. The following morning we departed for Sidney BC to clear customs into Canada. We were dreading the fact that we had more alcohol aboard than planned (after only spending 5 days of our month trip in the US), but were pleasantly surprised when Canadian officials said no problem! While in route to Sidney, Gerry found a log off Forest Island that damaged the speed sensor as it rolled along the bottom of Huzzah. I was so appalled that I severely reprimanded myself with lots of sailor language. Hopefully that's all the damage, but a dive will be needed to confirm that. From there we visited the beautiful Butchart Gardens on Tod Inlet, then Ganges, Nanaimo and finally arriving in Desolation Sound. The trip has not been as smooth as expected due to sporadic displays of poor judgment by the captain which has resulted in a punctured inflatable dinghy and a damaged sail. Even this cannot diminish the sheer beauty and solitude of this area, or the fellowship with friends, eh!
Cheers from Huzzah